Czeslawa Kwoka Died At The Hands Of The Nazis, But The Power Of Her Auschwitz Portrait Lives On

The Nazis may have killed 14-year-old Czeslawa Kwoka at Auschwitz. But they couldn't extinguish the haunting power of the photo they took of her before she died.

The Holocaust happened on a scale so massive that we’re virtually unable to fully comprehend its scope. Reading the words “6 million lives” is certainly chilling (to say nothing of the millions of others killed), but it is a number so large that it becomes abstract. It’s thus difficult to attach a human element to this great tragedy, to attach a face to every figure.

Wikimedia CommonsCzeslawa Kwoka, photographed for Nazi records upon her arrival at Auschwitz and just after she’d been beaten by a camp guard. Circa 1942-1943.

Czeslawa Kwoka was one of the 116,000 Poles deported from their tiny villages in the wake of the German invasion in 1939. These villagers, mainly Catholic farmers, were ripped from their homes to make room for the Germans that the Nazis imagined would soon come to populate the area.

Very little is known about Kwoka’s life before this moment. We do know that Czeslawa Kwoka was born in the small village of Wolka Zlojecka in southeastern Poland on August 15, 1928, and that she and her mother were deported from Zamosc, Poland to Auschwitz on December 13, 1942.

But to the Nazis, Czeslawa Kwoka was just prisoner 26947. She was also a photo. 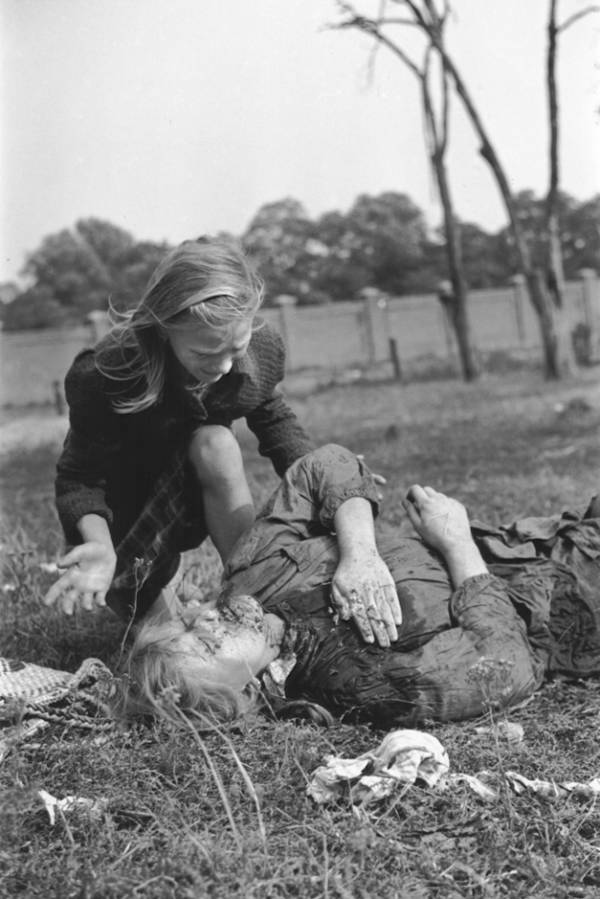 Wikimedia CommonsA young Polish girl discovers the body of her sister, killed by a German bomb. 1939.

Known for their ruthless efficiency and murderous bureaucracy, the Germans photographed and cataloged the prisoners who passed through the death camps for their records. In Kwoka’s photo, the fright emanating from her expression has transcended the black and white of the image and remains potent decades later. Her terror is palpable, conveying all of the horrors of the Holocaust without words or movement.

The 14-year-old girl in this haunting photograph would be dead three months after the shutter snapped, one of the 230,000 children at Auschwitz where life expectancy was a few months at most.

It is not known how she was killed, whether by hard labor, exhaustion, horrifying experiment, or any of the other countless methods of murder the Nazis had at their disposal. 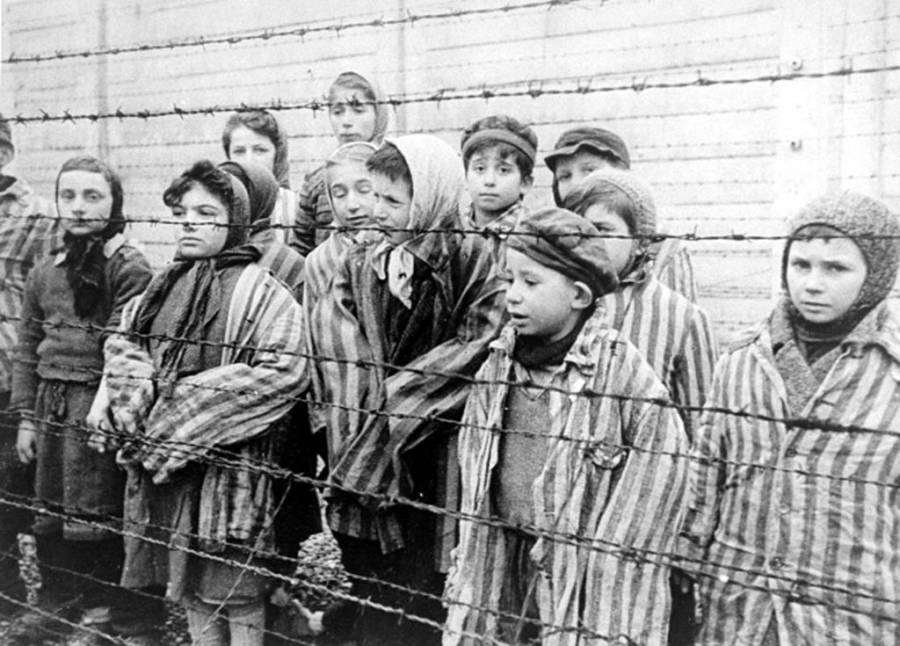 Wikimedia CommonsChild prisoners stand near the fence at Auschwitz. 1945.

While we don’t know exactly what came after the photo, we do know what had come just before, thanks to the recollection of photographer Wilhelm Brasse. A Polish man deported to Auschwitz by the Nazis, Brasse was forced to photograph between 40,000 and 50,000 prisoners at the camp, including Czeslawa Kwoka.

He vividly remembered taking her photo, recalling how the terrified girl was ushered in with the others, unable to understand anything that was happening around her:

“So this woman Kapo (a prisoner overseer) took a stick and beat her about the face. This German woman was just taking out her anger on the girl. Such a beautiful young girl, so innocent. She cried but she could do nothing. Before the photograph was taken, the girl dried her tears and the blood from the cut on her lip. To tell you the truth, I felt as if I was being hit myself but I couldn’t interfere. It would have been fatal for me. You could never say anything.”

The blood from the cut on Czeslawa Kwoka’s lip is still visible in the photograph that Brasse took.

As camp photographer, Brasse was an eyewitness to all of Auschwitz’s nightmarish horrors. He captured the raw fear on the prisoners’ faces and preserved it for eternity. 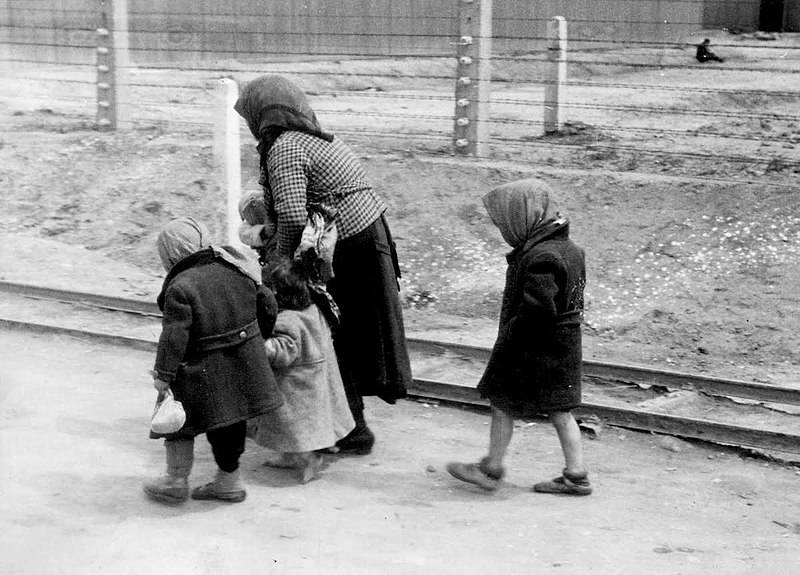 Wikimedia CommonsAn elderly Hungarian women and three children march to the gas chambers at Auschwitz in 1944.

Even after Brasse was sent to another concentration camp and finally liberated by American forces in 1945, he wrestled with the ghosts of the tens of thousands of victims he photographed for years to come. Eventually, he had to give up photography altogether.

“When I started taking pictures again,” he explained, “I saw the dead. I would be standing taking a photograph of a young girl for her portrait, but behind her I would see them like ghosts standing there. I saw all those big eyes, terrified, staring at me. I could not go on.”

These ghosts live on thanks to people like Brasse, who preserved the photos despite the Nazis’ best efforts to destroy them.

Once they realized the war was lost, the Germans tried to get rid of all evidence of the terrible things they had done, a measure that included the burning of victim’s identity cards. But Brasse and a few others managed to hide the negatives, preserving the faces to the victims that suffered these unimaginable abuses. 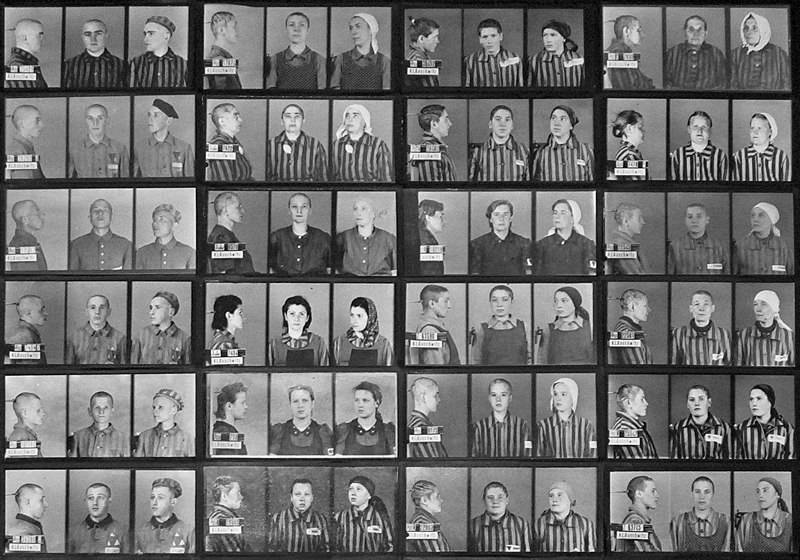 The photograph of Czeslawa Kwoka was among those that Brasse managed to save. The frail, young face emblazoned with fear remains a poignant reminder of the all-consuming horrors of genocide and war, of all the lives that were extinguished before they had really begun.

After this look at Czeslawa Kwoka and her powerful portrait from Auschwitz, see the most photos taken during the Holocaust. Then, discover the horrors of the largely overlooked genocide in Nazi-occupied Poland.