The Story Behind The Gruesome Wounded Knee Massacre

The Wounded Knee Massacre in 1890 was one of the most notorious episodes of violence by the United States government against Native Americans.

While most peoples know about the horrors of the Wounded Knee Massacre in South Dakota, few know the backstory to the incident, which involves a Paiute prophet named Wovoka.

In 1889, Wovoka went into a deep trance. When he emerged, he told his tribesmen that he had foreseen the way to paradise. He claimed that if the Native Americans returned to their traditional ways and performed a sacred dance, the buffalo would come back to the plains, the whites would be driven out, and the dead would return to help in the fight. It was this last prophecy that gave the religious movement its name – the Ghost Dance.

The Plains Indians — who had once roamed free across the American west — saw their centuries-old way of life disappear within a generation. Confined to small reservations on the lands that had once been theirs and dependent on American bureaucrats to meet even their most basic needs, some Native Americans turned to this new religion in the last hope that their old way of life could be restored.

Library of CongressSioux ceremonial dancers in the late 19th century.

The movement spread like wildfire amongst the Sioux, where it would set off the final chapter in the great war between whites and Native Americans that had begun when the first European settlers arrived centuries earlier.

Before the Wounded Knee Massacre, tensions were already high between the Sioux and the Americans by the time the Ghost Dance craze became popular. The government agents who worked on the reservations had no idea of the meaning behind it and became nervous that it was some kind of war dance. One official finally became so frightened that he sent a telegram to the government requesting military backup, frantically claiming, “Indians are dancing in the snow and are wild and crazy… we need protection and we need it now.”

In response, the United States sent in 5,000 cavalry troops to arrest several leaders who had been marked as agitators. They caught up to one of their targets, Chief Big Foot, as he and 350 Sioux made their camp near Wounded Knee Creek. The atmosphere was already charged when the soldiers went around the camp on the morning of December 29, 1890, and began seizing all weapons they found.

One of the men sent on this mission to tame the Sioux was Philip Wells, who was part Sioux himself and served as an interpreter. Wells clearly described the state of unease as Colonel Forsyth spoke with Chief Big Foot, who was so ill at the time that he could not even walk and had to be carried from a wagon and lain on the ground. 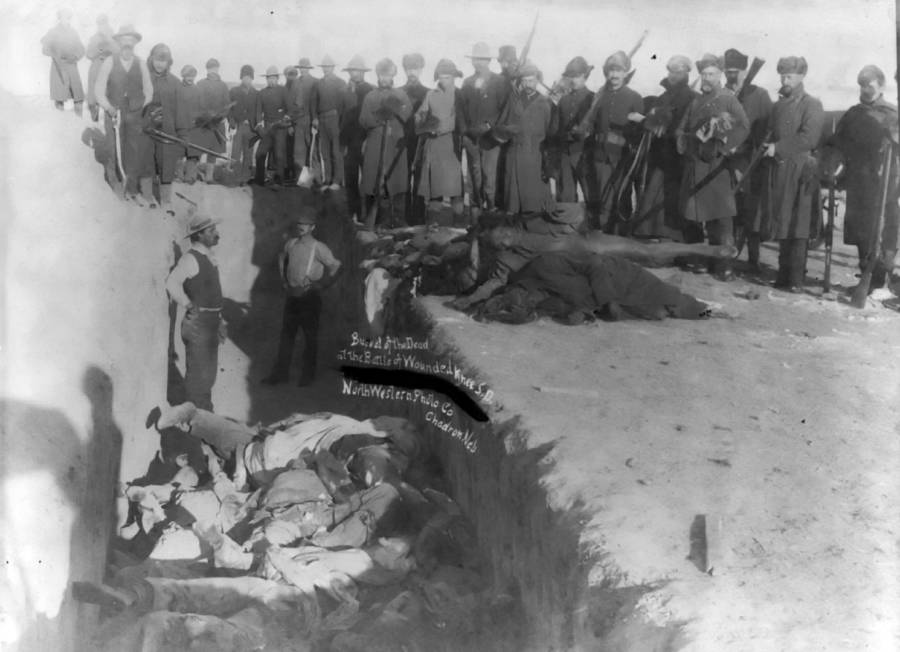 Wikimedia CommonsAmerican soldiers dump the Sioux dead into a mass grave after the Battle of Wounded Knee.

The colonel asked that the Sioux surrender their arms, to which the chief replied that they had none. Forsyth then ordered Wells “tell Big Foot he says the Indians have no arms, yet yesterday they were well armed when they surrendered. He is deceiving me.”

Some of the nearby Sioux became agitated as they overheard the conversation and one medicine man who was “gaudily dressed and fantastically painted” began performing the ghost dance, shouting “I have lived long enough! Do not fear, but let your hearts be strong!” Some of the younger warriors joined in, further worrying the soldiers, who feared this might be the prelude to a fight.

Everything came to a head when the soldiers tried to order a deaf man to surrender his gun. Since he could not hear what they were saying, he did not immediately give his weapon up, and the soldiers attempted to forcibly grab it from him. At some point during the scuffle, a shot was fired and the Wounded Knee Massacre began.

Library of CongressAn artist’s rendering of the Wounded Knee Massacre that appeared in Harper’s Weekly in 1891.

It is unknown to this day who fired the shot, but U.S. soldiers immediately opened fire.

The Sioux were unprepared and the majority had just had their weapons taken from them; they could offer little resistance.

Library of CongressChief Big Foot was shot on the ground where he was lying sick.

Chief Big Foot was killed where he was lay, along with 150 or more of his people, half of whom were women and children. The United States suffered a total of 25 casualties and the Wounded Knee Massacre would be the final chapter in 19th-century confrontations between the whites and Native Americans.

After learning about the Wounded Knee massacre, read about the lasting legacy of the genocide against Native Americans. Then read how Adolf Hitler took inspiration from this genocide to forge his Final Solution.