For centuries, Japanese samurai adhered to bushidō, a strict code of honor that emphasized loyalty and honor to country and family. And it still influences Japanese culture today.

The word “bushidō” is one of the most evocative to make its way from Japan into the wider world. The mere mention of it calls to mind romantic images of dashing samurai acting according to a strict ethical code governing every aspect of their lives.

Even today, the concept of bushidō is popular in settings as diverse as martial arts schools and corporate boardrooms, where the precepts of loyalty to one’s group and superiors and willingness to sacrifice all are extolled as supreme virtues. 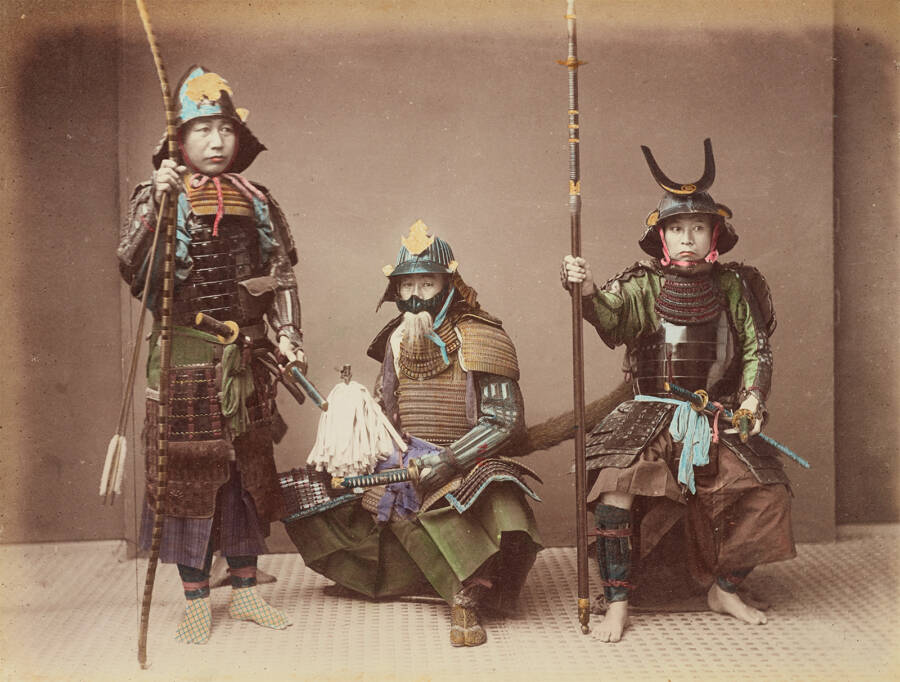 Public DomainSamurai in armor, circa 1860s.

Yet were you to ask a samurai their thoughts on the bushidō code any time before the 1880s, you’d be more likely to get some very puzzled looks rather than a lecture on the way of the warrior. The reason for this is simple: bushidō was more or less pulled out of thin air as Japan came crashing into technological modernity at a time when many worried that the island nation would lose its traditions.

This is the story of how an occasionally disturbing legend became ingrained in global culture as the defining characteristic of Japanese society. 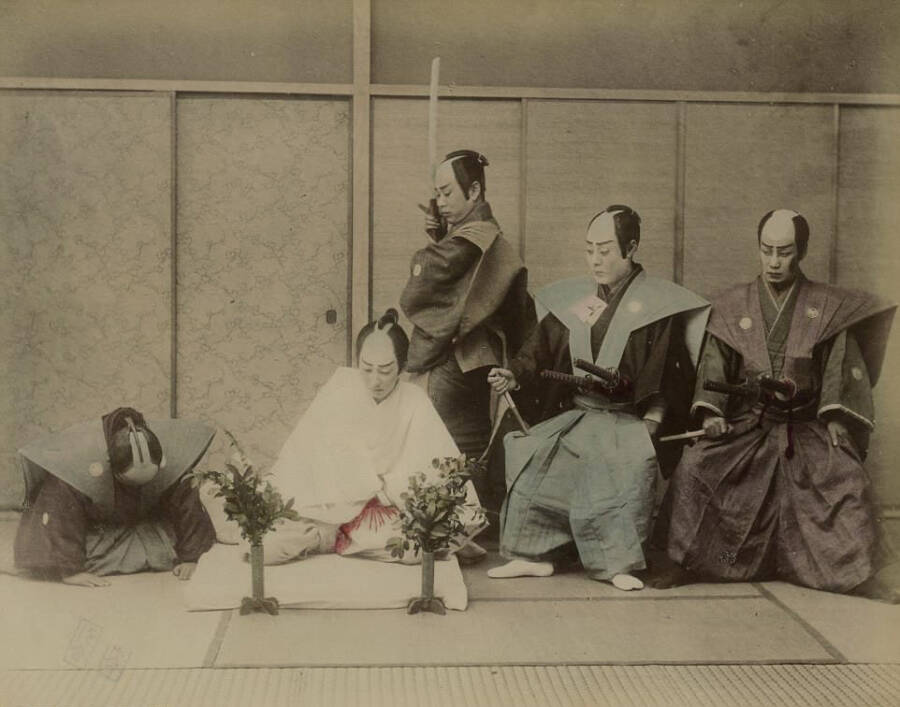 Wikimedia CommonsA reenactment of seppuku, Japanese ritual suicide, in a 19th century play. Willingness to die to preserve one’s honor was claimed to be a key element of bushidō.

According to its modern proponents, bushidō is a uniquely Japanese code of ethics based on duty, honor, and loyalty. These qualities largely derive from Confucian ethics, which stressed personal loyalty and an iron adherence to social hierarchy.

According to the Hagakure, sometimes called “the samurai bible” outside of Japan, if a samurai “will only make his master first in importance, his parents will rejoice and the gods and Buddhas will give their assent. For a warrior there is nothing other than thinking of his master.”

There is sufficient evidence that individuals held these ideals throughout early medieval Japan without being part of a single, formal “bushidō code.” For example, the earliest recorded instance of seppuku, or ritual suicide, occurred in 1170 AD, when Minamoto no Tametomo cut his stomach open after suffering defeat at the hands of a rival clan.

Yet just as often, Japanese feudal lords and their retainers readily betrayed one another if it suited their purposes. Among the most famous examples is the Battle of Sekigahara in 1600, the largest clash of samurai forces in Japanese history.

At the climax of the battle, tens of thousands of otherwise steadfast samurai turned their backs on the Toyotomi clan and joined the forces of Tokugawa Ieyasu. The victory which resulted from this betrayal was the first step in the foundation of Japan’s last shogunate, which would reign for nearly 300 years until the country opened up to the west in the 1860s. 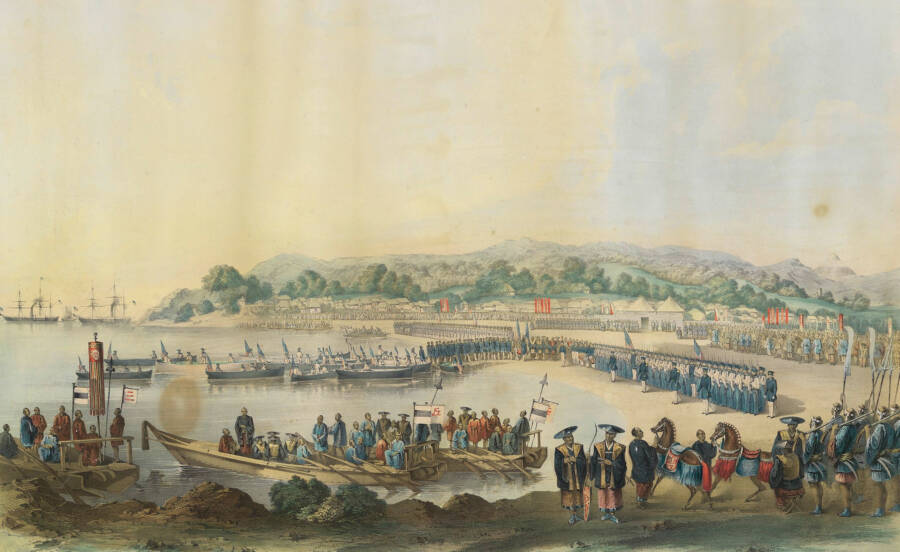 National Portrait GalleryA depiction of the first landing of American troops on Japanese soil. Commodore Matthew Perry of the United States Navy was responsible for forcing Japan to open its borders, thus triggering the collapse of the shogunate.

By the mid-19th century, the rapidly expanding Western economies of the industrial age were hungry for new markets for export and sources of rare and exotic goods and materials. Japan, the only major East Asian nation still cut off from the outside, was a ripe target.

On July 8, 1853, American naval officer Matthew C. Perry sailed into modern Tokyo Bay with four warships, including two ultra-modern steam-powered paddle frigates. The most forward-looking Japanese could see that the age of the samurai was coming to a close. And by the summer of 1868, a new regime had arisen under the leadership of the young Emperor Meiji.

In the decades to follow, hundreds of young men from samurai families traveled abroad to enroll in Western universities. Among them was Inazō Nitobe, a Christian convert who learned of European chivalry while studying in the United States.

Despite Japan’s breakneck pace in adopting Western technology, political styles, and morality, Nitobe worried that his homeland was in danger of losing its distinctive character and of being perceived as having no unique cultural contributions.

Wikimedia CommonsBushidō was used to exhort Imperial Japanese Army troops to fight fearlessly for the emperor, as in the First Sino-Japanese and Russo-Japanese Wars.

His attempt to counter that fear came in the form of a book published in 1900, Bushido: The Soul of Japan. For the first time in history, the virtues that Nitobe claimed formed the basis of samurai ethics — and by extension, those of Japanese society — were collected in one volume, with language directly linking the samurai to the romanticized knights of medieval Europe.

“It is indeed striking,” wrote Nitobe, “how closely the code of knightly honor of one country coincides with that of others.”

Nitobe, an agricultural economist, was utterly unfamiliar with Japanese history, military or otherwise. He even believed that he was the first to use the term “bushidō.” And his selective description of a code at odds with the evidence earned him condemnation from the Japanese public and scholars such as Inoue Tetsujirō, a proponent of samurai ethics for more imperialistic reasons.

But Nitobe’s work captured the Western imagination. With a clear counterpart to the chivalrous knight of the Middle Ages — itself a creation of 19th-century authors — Europeans and Americans felt like they finally understood Japan.

Summarizing his motivations for the book, Nitobe said, “I wanted to show that the Japanese are not really so different.” 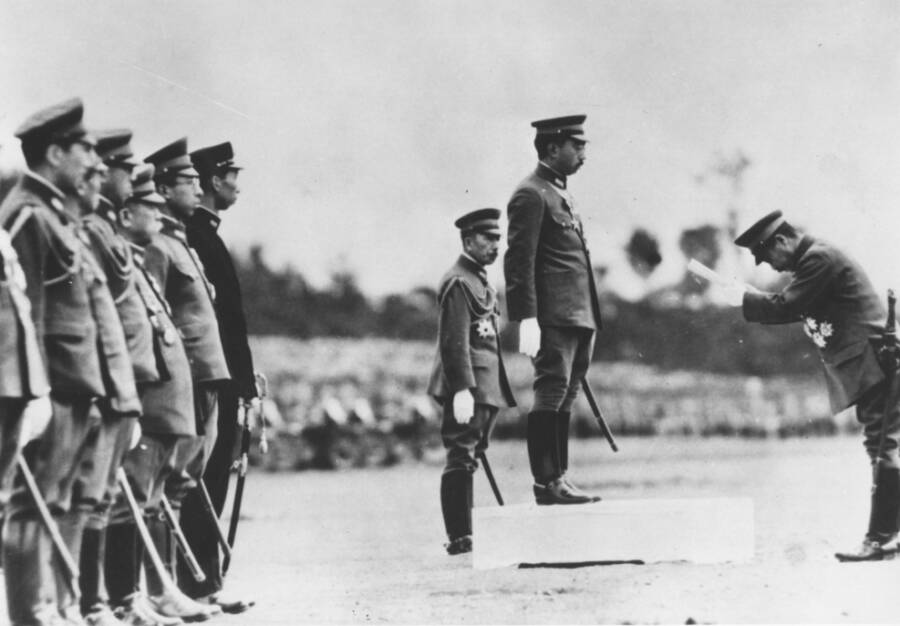 National Archives and Records AdministrationBy shifting the focus of honor of Nitobe’s bushidō from a samurai’s master to the emperor, Japanese militarists hoped to create a nation loyal to the central figure of the empire.

In Japan, interest in Nitobe and Tetsujirō’s ideas about the bushidō code exploded as the imperial government looked to colonial expansion to stabilize its economy after a depression and as militant political factions grew more robust and more radical.

For fifty years, generations of young men had been conscripted into the Imperial Japanese Army, priming the population to praise and support the military’s actions.

Stories of valiant and steadfast samurai remaining loyal to their masters to the bitter end were wildly popular on stage, print, and radio. Bushidō was even formally incorporated into military training and public schools in 1910.

The effort was so successful that, by 1927, one observer wrote that “when considering Japanese morality, many people think of bushidō.”

The timing was crucial. Independently-minded army officers serving in China assassinated warlords and slowly increased Japanese military strength. Throughout the 1930s, far-right military officers made several coup attempts, and the Japanese government came increasingly under the sway of senior generals who needed a way to encourage the populace to support their imperialistic aims.

And during World War II, the bushidō code endured until the very end. “No quarter, no surrender. Take no prisoners. Fight to the bitter end. These were everyday words in the combat areas,” historian John Dower wrote in 1986. 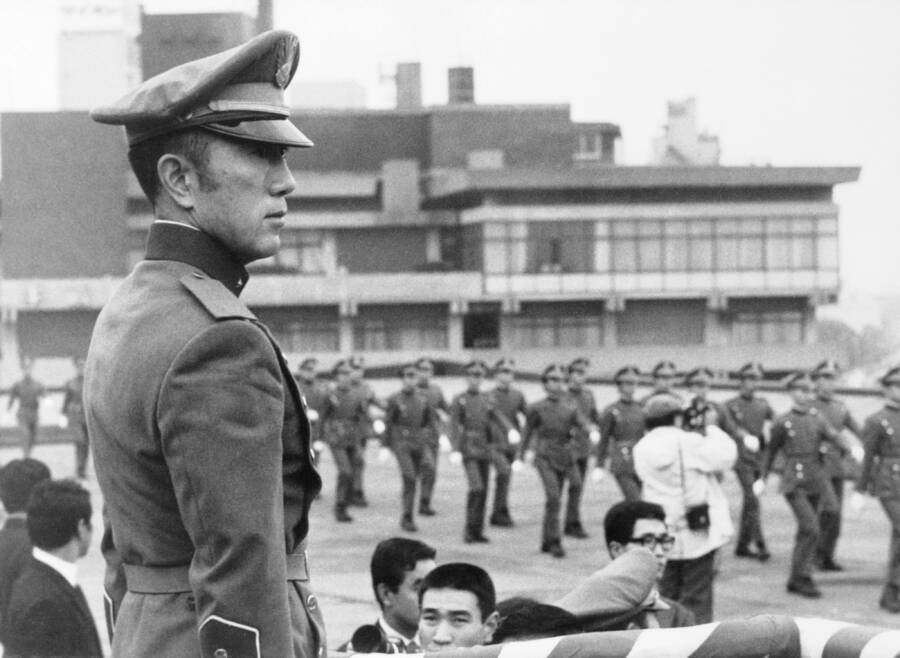 Bettmann/Getty ImagesYukio Mishima, seen here overseeing his private militia, was morbidly fascinated by the imperial bushidō of his youth.

After the Japanese surrender in August 1945, the nation turned against many aspects of the Empire, including bushidō. Many former soldiers openly criticized the imperial version of the code, and occupying authorities’ bans on militaristic writing and film prevented any interest from lingering.

Most people in postwar Japan ignored bushidō until 1970, when famed author Yukio Mishima dramatically committed ritual suicide after a failed coup attempt. His fascination with the bushidō of the war years revived debate around the topic. And during the economic growth enjoyed by Japan in the 1970s and ’80s, CEOs cited bushidō as a model and explanation for their international success.

Today, Nitobe’s version of bushidō has the most significant currency in Japanese culture and abroad. It’s still cited in many martial arts schools, particularly those outside Japan, and it was even used to support Japan’s contributions to the Iraq War.

In recent years, as the more horrific events of Japan’s imperial past are removed from school textbooks and ignored or denied by high-ranking politicians, the fact that the ideology used to justify such atrocities is effectively a fantasy is as little-known in Japan as it is elsewhere.

After reading about the surprising history of bushidō, the ancient code of the samurai, take a look at these incredible photos of the last great samurai. Then, see rare pictures that take you inside Japan at the height of its 19th-century Imperial Era.