Meet The Dahomey Amazons, The Fearless All-Female Army That Once Dominated West Africa

Trained to be ruthless killers, Dahomey Amazons struck fear into the hearts of 19th-century colonizers. And though they were ultimately defeated, some survivors still got their revenge. 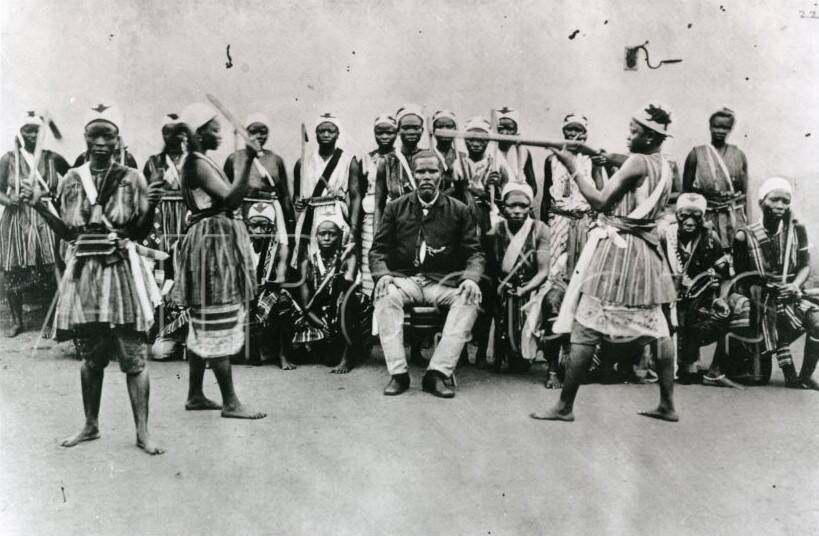 Wikimedia CommonsDahomey Amazons show off their skills. Circa 1890.

When French colonizers tried to take over the West African Kingdom of Dahomey in the late 19th century, they were met with fierce resistance from the Dahomey Amazons, a thousands-strong squad of fearless women warriors.

Though they were strategically married to their king, Dahomey Amazons devoted their lives to battle and vowed never to bear children. Among them were riflewomen and “reapers” who carried blades that could slice an enemy in half.

According to one French soldier, the Dahomey Amazons were warriors who “fight with extreme valor, always ahead of the other troops,” and were “outstandingly brave… well trained for combat and very disciplined.”

This is their incredible yet often-overlooked story.

The Origin Of The Dahomey Amazons 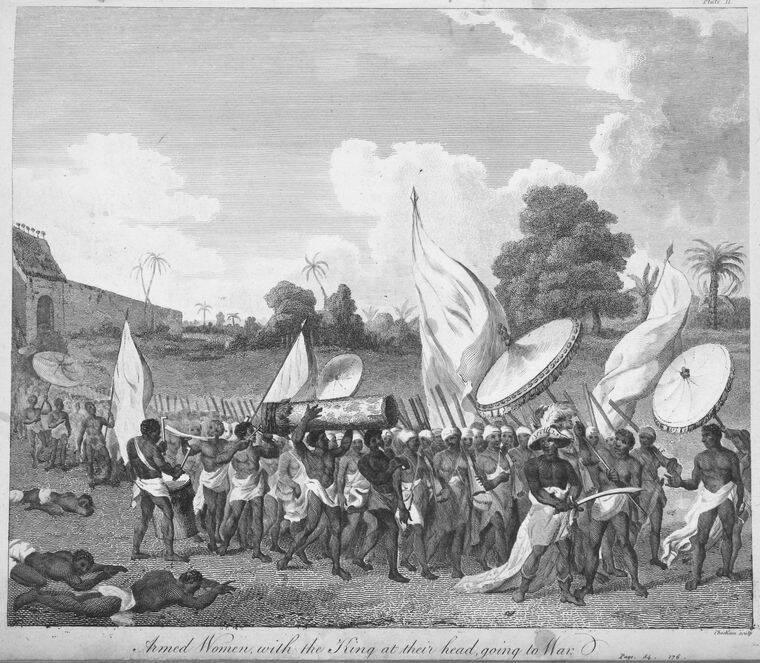 From the 17th century until 1904, the West African Kingdom of Dahomey ruled over an expansive area of what is now known as the Republic of Benin.

The kingdom featured a bustling economy built on war triumphs, slavery, and international trade with Europeans. It was also organized around a centralized monarchy, had a complex taxation system, and a massive military.

But perhaps the most impressive aspect of the pre-colonial power was its legion of fierce women warriors.

Known among their own people as the Mino, or “mothers,” and the Ahosi or “king’s wives,” this 3,000-soldier legion protected the Kingdom of Dahomey for centuries.

One scholar traced the elite warriors back to the early days of Dahomey when the king recruited bodyguards from his “third class” wives or the women he deemed too unattractive for marital duties.

These female bodyguards provided an advantage over male soldiers. As they were to be married to the king, their loyalty was therefore guaranteed. They could also patrol the palace compound after dark when men were traditionally banned from entering.

But where they were considered protectors to their own people, the Mino were a formidable presence to the Europeans, who so-named them for the powerful women warriors in ancient Greece and also the “Black Spartans” for the militaristic city-state of Sparta.

Dahomey was therefore also referred to as “Black Sparta.”

By the mid-19th century, the Dahomey Amazons made up as much as 40 percent of the kingdom’s army.

Divided into several corps, the Amazons included huntresses, riflewomen, reapers, archers, and gunners, who carried their own massive iron artillery. Each corps also had its own female commanders, uniforms, weapons, and traditions.

Among the “Black Spartans” were also women hunters called gbeto, who were the oldest military unit of women soldiers, dating back to the army’s origin. In the 1850s, a French traveler reported on a group of 20 women who attacked a large herd of elephants, armed with curved daggers and antelope horns tied to their heads. 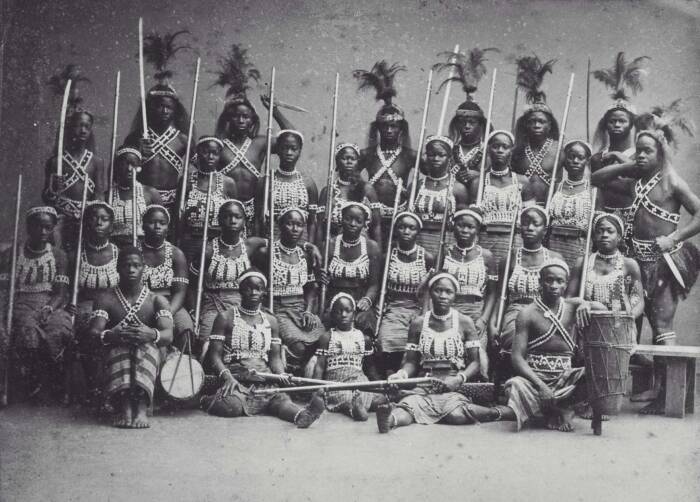 Women in Dahomey didn’t automatically qualify for the elite warrior unit simply by marrying the king. They also had to pass a series of tests that ranged from shows of athleticism to acts of torture.

For instance, in the 19th century, King Gezo of Dahomey ordered potential recruits to scale a wall covered in sharp thorns to prove they could withstand pain. Another test sent the recruits into the forest with no rations to see if they could survive.

But the most brutal tests came during their so-called “insensitivity training.”

Most recruits had never killed before joining the military, so King Gezo wanted his warriors to execute prisoners of war to prove their grit. In one test, the women were ordered to throw bound prisoners off a tall platform. In another, recruits were to use their blades.

In 1889, a French officer watched in horror as a teenager named Nanisca “walked jauntily” toward a bound prisoner. Nanisca then “swung her sword three times with both hands, then calmly cut the last flesh that attached the head to the trunk… She then squeezed the blood off her weapon and swallowed it.” 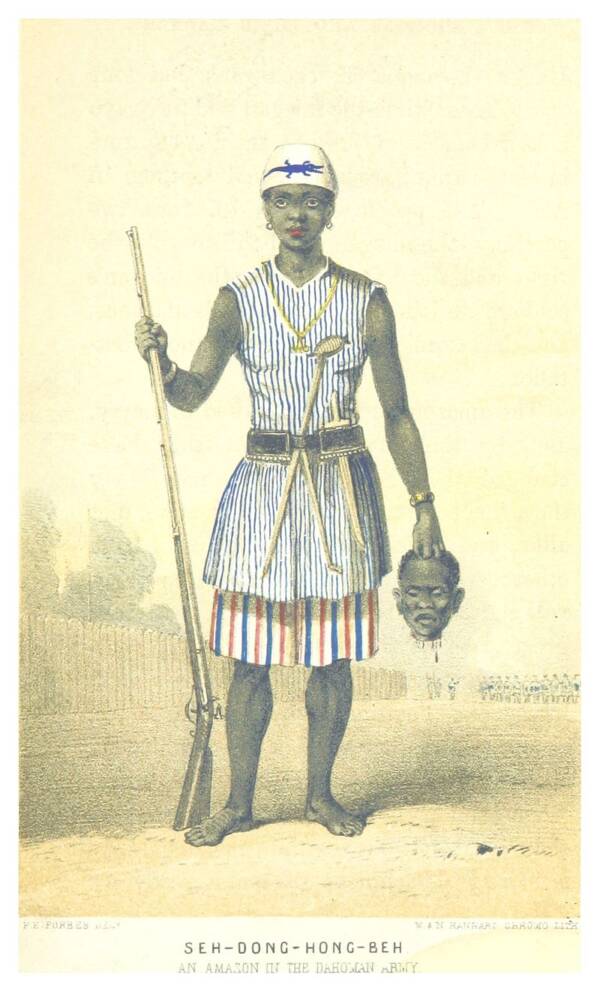 After women passed the test, they enjoyed a life of luxury in the king’s palace, where they shared the king’s alcohol and tobacco.

According to a scholar, “When Amazons walked out of the palace, they were preceded by a slave girl carrying a bell. The sound told every male to get out of their path, retire a certain distance, and look the other way.”

If they failed to do so, such men were subject to punishment by death.

In 1862, Commodore Arthur Eardley Wilmot noted that women greatly outnumbered men in Dahomey. Whether because of ongoing wars or the slave trade, men were in short supply.

Around that same time, the number of Dahomey Amazons grew as much as 10 times. But eventually, the warriors fell to better-equipped French armies.

In 1890, during the First Franco-Dahomean War, the French prevailed thanks to their more powerful rifles. Nanisca, the warrior who beheaded a prisoner, fell during a battle.

“The cleaver, with its curved blade, engraved with fetish symbols, was attached to her left wrist by a small cord,” a French eye-witness wrote, “and her right hand was clenched around the barrel of her carbine covered with cowries.”

During one fierce battle with the French, over 400 Dahomey Amazons defended their country, but only 17 survived. 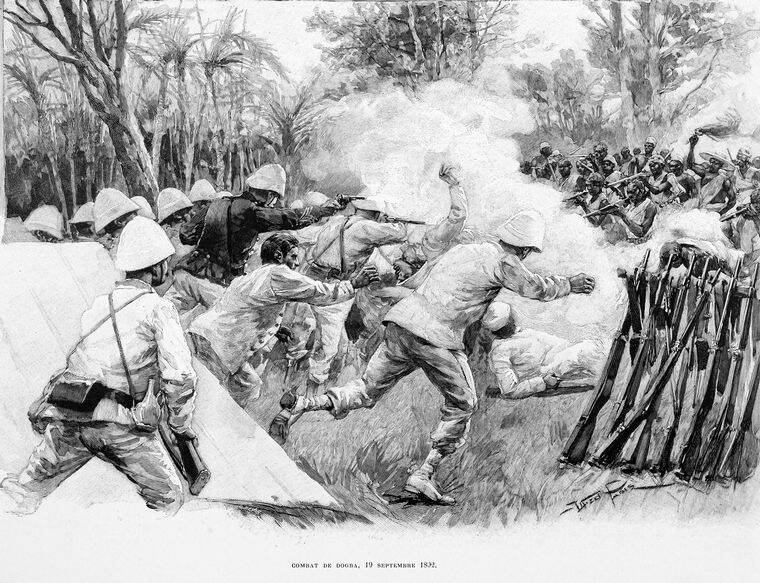 Alexandre d’Albéca/New York Public LibraryThe French attack the Dahomey Amazons during the Battle of Dogba in 1892.

Even after Dahomey fell to the French, the Dahomey warriors continued to fight. They hid among women captured by the French, slitting the throats of French officers at night.

The French were so terrified of the Amazons that they disbanded their units and decreed that Dahomean women could never serve in the military or carry weapons.

The bravery of the Dahomey Amazons was most recently honored in Marvel’s blockbuster film, Black Panther. They were portrayed as the fictional Dora Milaje, an elite army of women warriors who protected the king of their nation, Wakanda.