Better known as devil's breath, scopolamine more than lives up to its name.

MOST DEVIL’S BREATH STORIES SOUND ABOUT THE SAME. Somebody has a friend or a cousin or a friend of a friend who was out one night when somebody slipped them something. They would wake up the next morning with their bank account drained, their belongings (or organs) gone, or much, much worse — and that’s it; that’s all they remember. 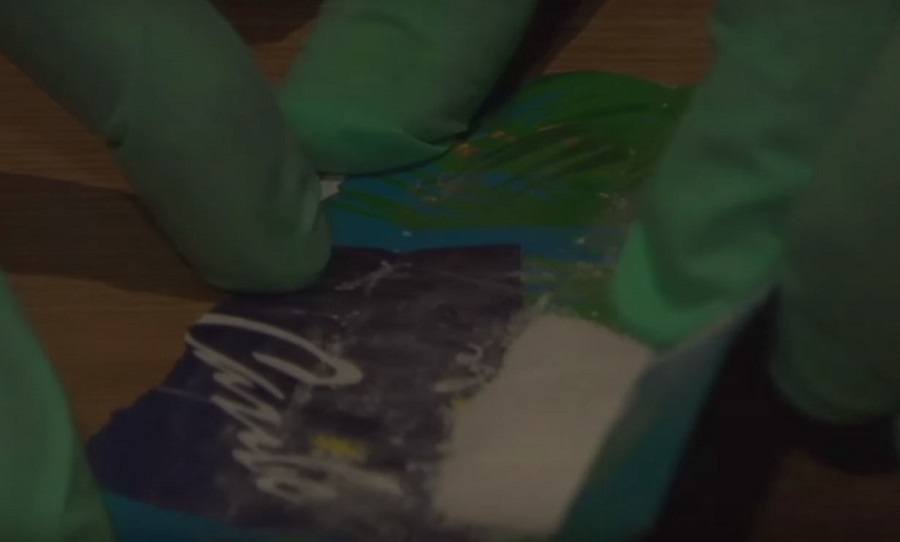 For the media outlets who knew the stories to be all too true and the government agencies who know that around 50,000 of those incidents occur in Colombia, the drug’s hotbed, each year, their question was a different one: Is devil’s breath the “world’s scariest drug”? 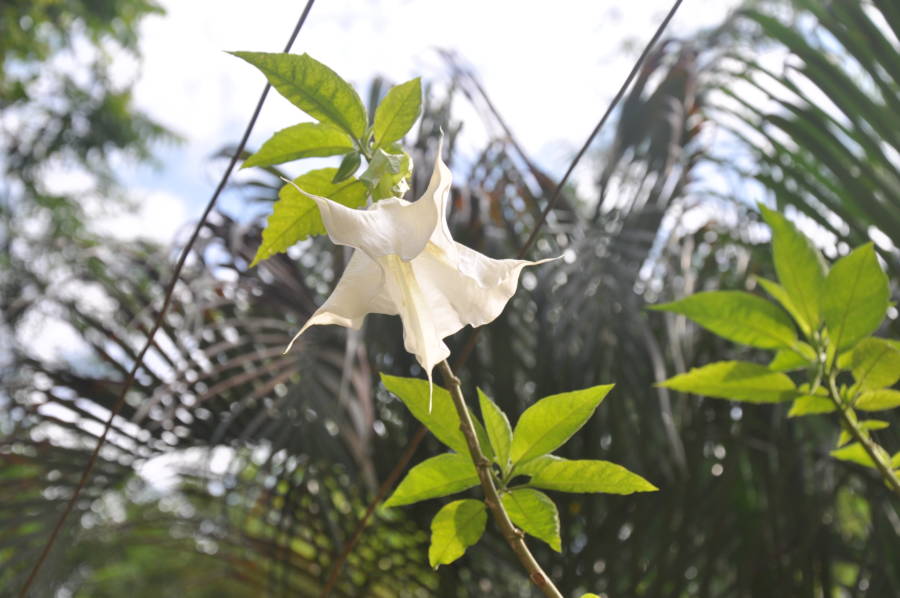 Jorge Láscar/FlickrThe flower of the Datura plant, from which devil’s breath is made.

The family of flowering plants responsible for devil’s breath has long gone by many equally colorful names: hell’s bells, devil’s trumpets, angel’s trumpets, henbane, moonflowers, jimson weed, and so on. Yet the name that best suits the tree is the one used in Colombia: the borrachero tree, which roughly translates as the “drunken binge” tree or simply the “get-you-drunk” tree. 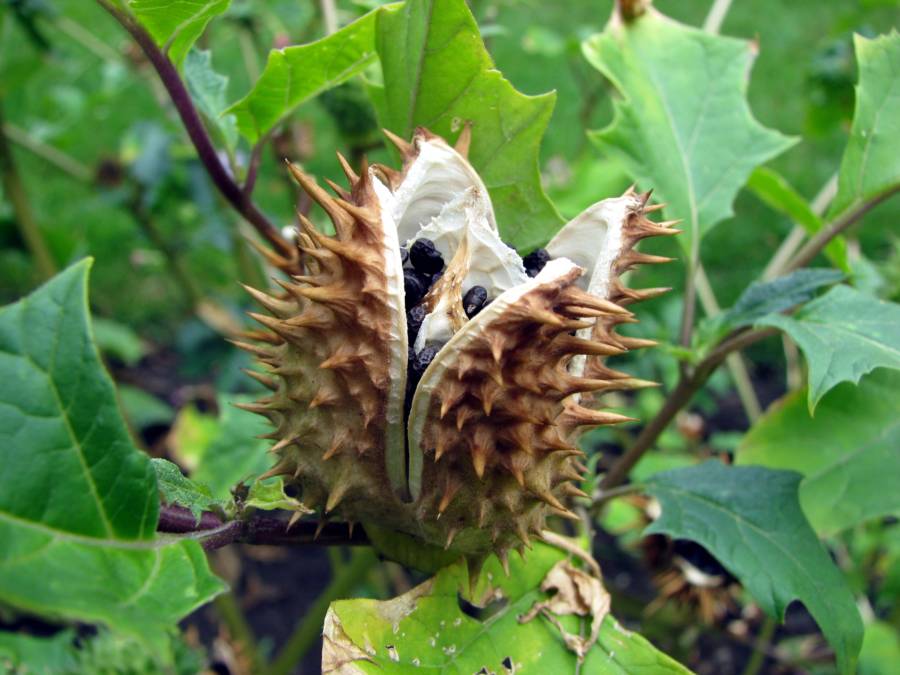 Wikimedia CommonsDatura seed pod opening up to reveal the seeds inside.

Although the plant sports such an intimidating name, it looks anything but. Reaching anywhere from less than ten to more than 30 feet in height, these trees and shrubs possess broad green leaves peppered with delicate flowers that bloom either upward like trumpets or downward like bells. These flowers come in elegant shades of white, yellow, pink, and purple — and they’re absolutely deadly.

Unlike the plant’s spiny seed pods — the other part of the plant from which devil’s breath is made, and the one whose appearance actually gives some indication of danger — these flowers cloak their toxic power in a thoroughly unassuming package.

Across large swathes of the planet, chiefly in North and South America, these flowers flourish with their sinister uses escaping all but the trained eye.

And in Colombia, a few trained eyes have chemically processed these flowers and seeds into an odorless, tasteless white powder that they’ve put to some very sinister uses indeed.

The Effects Of Devil’s Breath 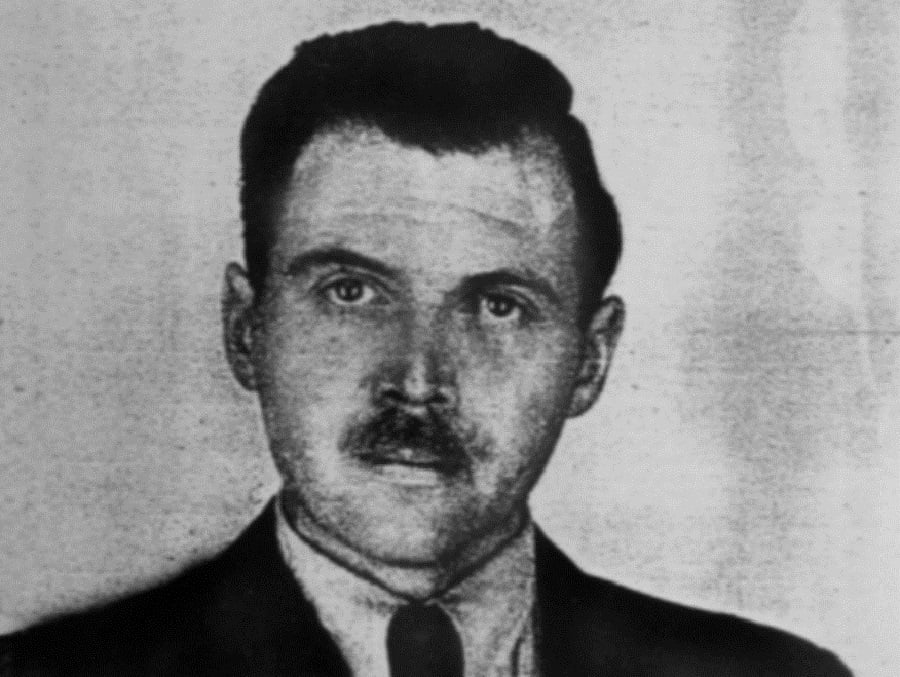 Wikimedia CommonsInfamous Nazi doctor Josef Mengele, who is rumored to have used devil’s breath in some of his experiments and interrogations.

Today’s Colombians may be taking devil’s breaths to new depths, but they’re hardly the first to recognize that this drug may be without peer when it comes to hurting people, or at least coercing them.

As for coercion, not long after German scientist Albert Ladenburg first isolated scopolamine in 1880, both doctors and government agencies began investigating its uses as a kind of truth serum.

In fact, the phrase “truth serum,” according to the C.I.A., is first believed to have been used in a 1922 Los Angeles Record report on the findings of Dr. Robert House, a Texas obstetrician who had begun using scopolamine to interrogate prisoners.

After House’s early experiments proved successful in extracting information from accused prisoners, he went on to publish more than ten papers on the subject, and the very notion of a quasi-magical truth serum entered public consciousness. 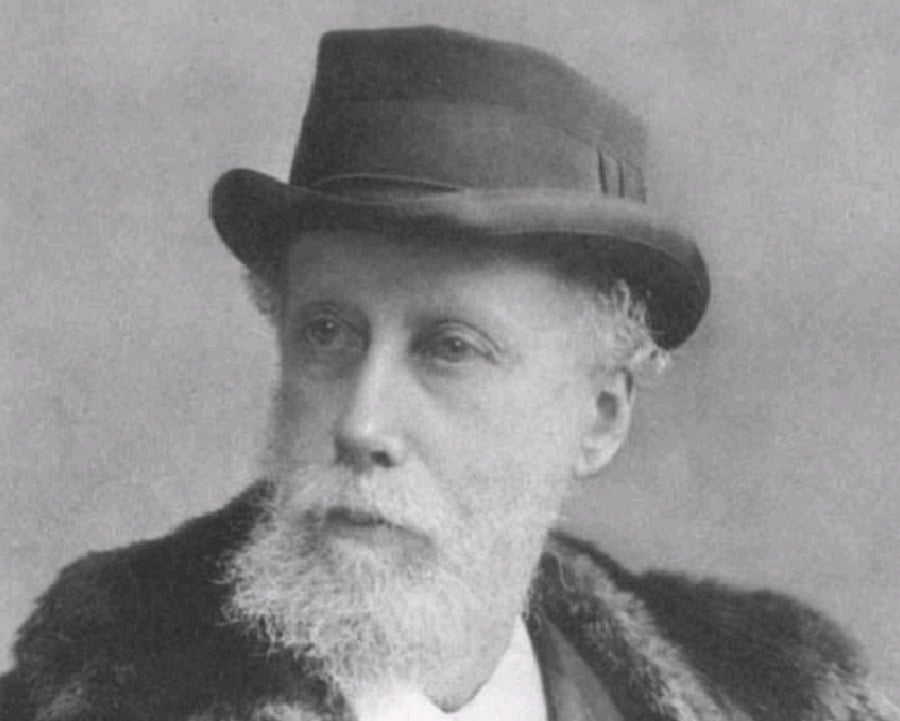 Following House’s research, “there is evidence suggesting that some police forces may have used it extensively,” the C.I.A. states. However, going all the way back to House’s initial findings — in which he wrote that someone dosed with scopolamine “cannot create a lie” but also has “no power to think or reason” — the ability of the drug to extract reliable information from prisoners proved dubious.

So while scopolamine may have thus fallen out of favor with most law enforcement agencies, that didn’t stop some of the more unscrupulous authorities from reportedly continuing to experiment with it.

Both the C.I.A. and the Soviets are widely believed to have used scopolamine in interrogations during the Cold War, while proof of such activity has been uncovered in former Czechoslovakia.

And before the dawn of the Cold War, infamous Nazi scientist Dr. Josef Mengele was rumored to have used the drug on his captive subjects. 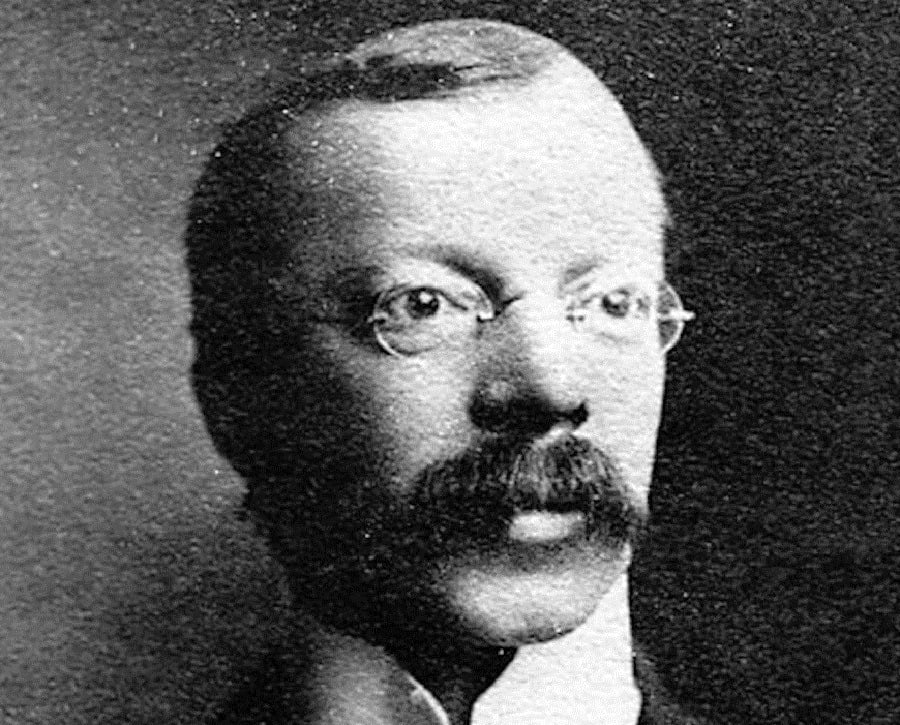 Wikimedia CommonsDoctor Hawley Harvey Crippen, famously hanged for the murder of his wife, who he allegedly dispatched with devil’s breath.

The further back in time we go, the more murky and oftentimes grisly the stories become. In 1910, Dr. Hawley Harvey Crippen was famously hanged after a widely covered trial for allegedly murdering his wife with scopolamine (which is indeed fatal in high doses).

But the history of scopolamine goes back much further than that.

The ancient Greeks used the henbane variant both as a recreational downer and as a medical sedative. Various cultures across Europe and Asia likewise used henbane in a sort of hallucinogenic beer known as a “magic brew” as far back as the Bronze Age. Accused witches during the Spanish Inquisition allegedly used henbane as an essential ingredient in their proverbial brews.

And some say that in pre-colonial Colombia, incoming leaders used scopolamine to lure the wives and mistresses of newly deposed leaders into mass graves where they would then be buried alive.

All in all, the further back you go, the more scopolamine (also a pioneering ingredient in legitimate medicines including sedatives, analgesics, anesthetics, and antihistamines) starts to feel like the mythic font of so many of humankind’s tonics, potions, drugs, and poisons. Likewise, it feels inevitable that someone would use it the way some Colombians use devil’s breath today. 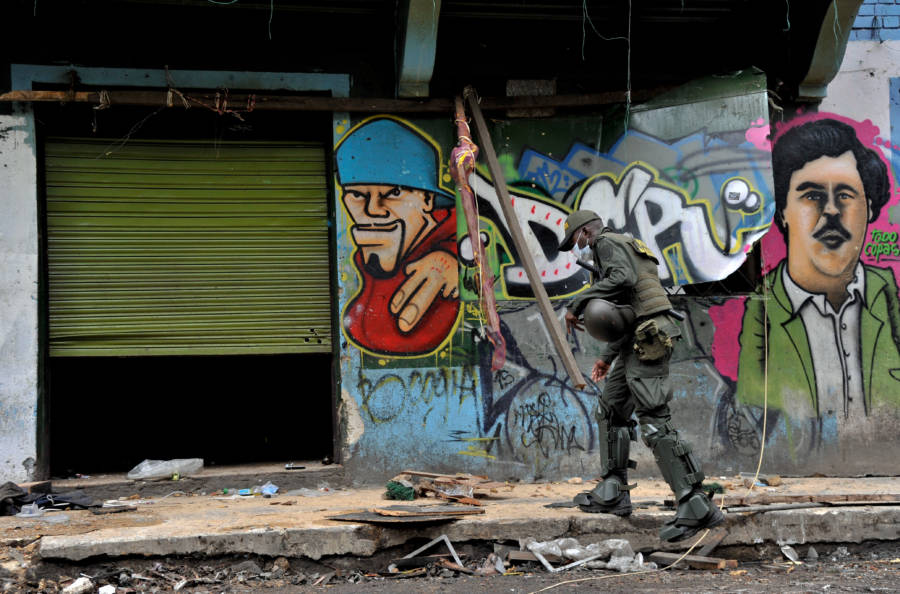 GUILLERMO LEGARIA/AFP/Getty ImagesPolice officers carry out an operation in the notorious section of Bogota known as The Bronx, plagued by rampant drug trafficking and prostitution rings, on May 31, 2016 just days after a raid.

“You just think about hurting others because you’ve already been hurt,” said Jessica Maria, the young Colombian prostitute who’d been on both the giving and receiving ends of devil’s breath, told VICE. “You think: ‘My life is useless. I’ll just do whatever I want.”

At civil war for 50 years, Colombia has a homicide rate of about 28 per 100,000 people — enough to place it 12th in the entire world, according to the most recent United Nations Global Study on Homicide (2014). 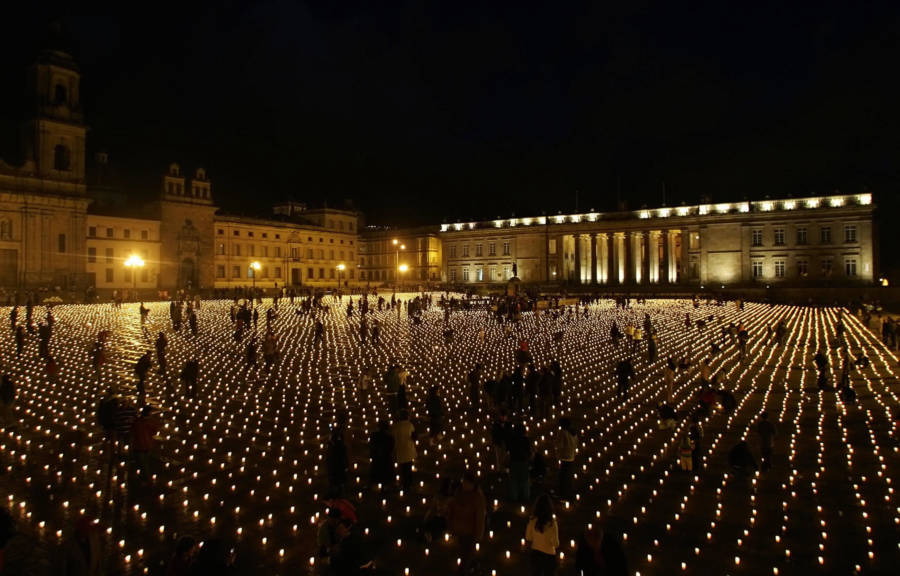 MAURICIO DUENAS/AFP/Getty ImagesHundreds of participants light candles during a demonstration against kidnappings — which are rampant in Colombia — at Bolivar Square in Bogota on July 3, 2007.

All in all, you have a country with stark lines between rich and poor, creating a large, hopeless underclass afflicted by rampant crime and immersed in a surging drug trade informed by the country’s status as the top cocaine producer in the world.

It’s under these conditions that experts say the use of devil’s breath by the Colombian underclass has flourished over the last two decades. 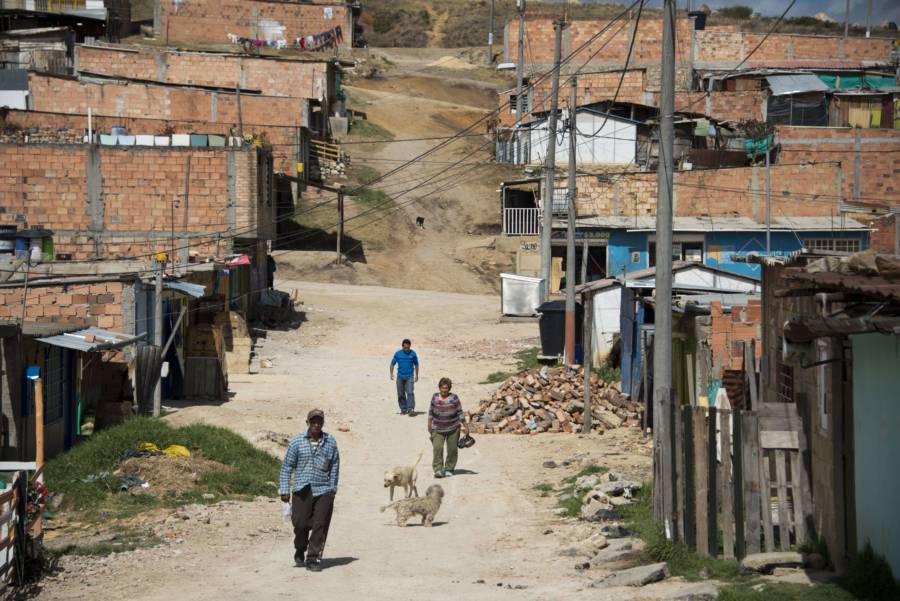 Indeed, as Bogota’s chief of police told VICE, the most common use of devil’s breath involves poor prostitutes like Jessica Maria slipping the drug to apparently wealthy men in order to take their money.

And when you put complex socioeconomic context like that back in, the true story of devil’s breath is hardly pat, hardly simple, hardly the stuff or urban legend at all.

After learning about scopolamine, have a look at the horrifying effects of krokodil, Russia’s own zombie drug. Then, read up on nyaope, the drug that blends heroin, rat poison, and HIV medication.