The Mysterious Death Of Danny Casolaro, The Journalist Who May Have Been Killed For Getting Too Close To The Truth

Danny Casolaro was investigating a number of conspiracy theories involving everything from Ronald Reagan’s election to the Iran-Contra affair when he was found dead under strange circumstances on August 10, 1991. 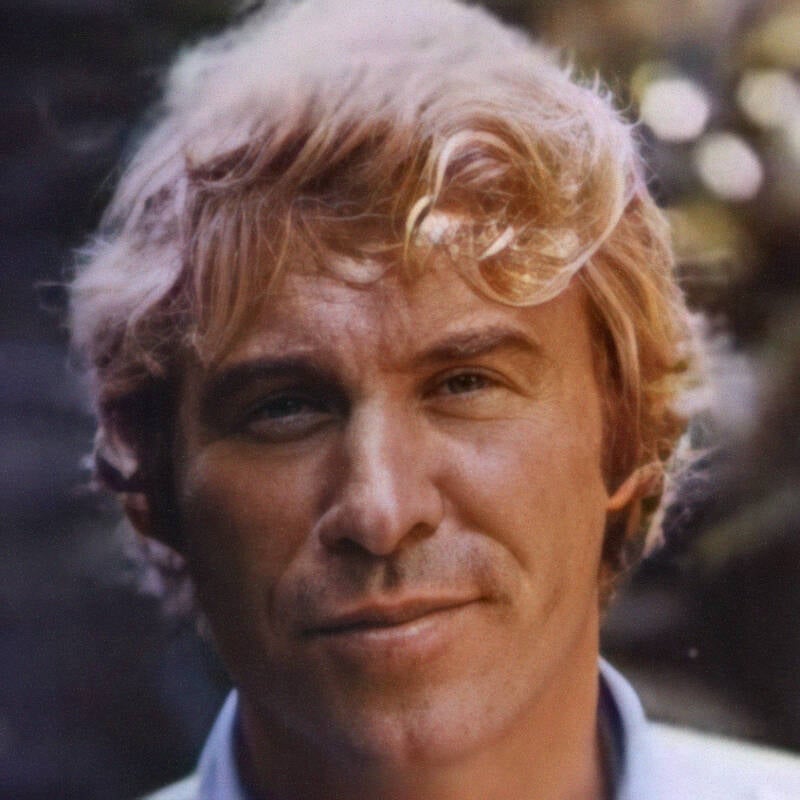 TwitterDanny Casolaro was investigating a shadowy conspiracy he referred to as the “Octopus” when he died by suicide in 1991.

On Aug. 10, 1991, journalist Joseph “Danny” Casolaro was found dead in a bathtub at the Sheraton Hotel in Martinsburg, West Virginia. For weeks, Casolaro had been following leads on a story he dubbed “The Octopus.”

Casolaro believed his digging had linked the powers within the U.S. government and high-finance to a melange of dark events around the world. Before his death, Danny Casolaro told his family he was being harassed and threatened — and soon after, he was dead. His death was ruled a suicide, but his family still believes he was a victim of the same network he was trying to expose.

Joseph Daniel Casolaro was born on June 16, 1947, in McLean, Virginia. Casolaro had a typical upbringing and was a good student, eventually enrolling in Providence College.

Casolaro did not set out to be a journalist. In fact, he considered it one of many hobbies along with boxing, poetry, and horse breeding. His entry into journalism included work on the current events of the time, including the Cold War and the Cuban Missile Crisis, but much of it went unpublished.

He married former Miss Virginia Terrill Pace and the pair had a son soon after. Casolaro’s journalism did not make ends meet, and when the pair divorced after a decade together, he was granted full custody.

Putting his creative pursuits aside, Casolaro bought several publications that served the tech industry. By the early 90s, he sold them and returned to his journalism after taking an interest in an early IT company called Inslaw that he heard whispers about from his colleagues.

Danny Casolaro And ‘The Octopus’ 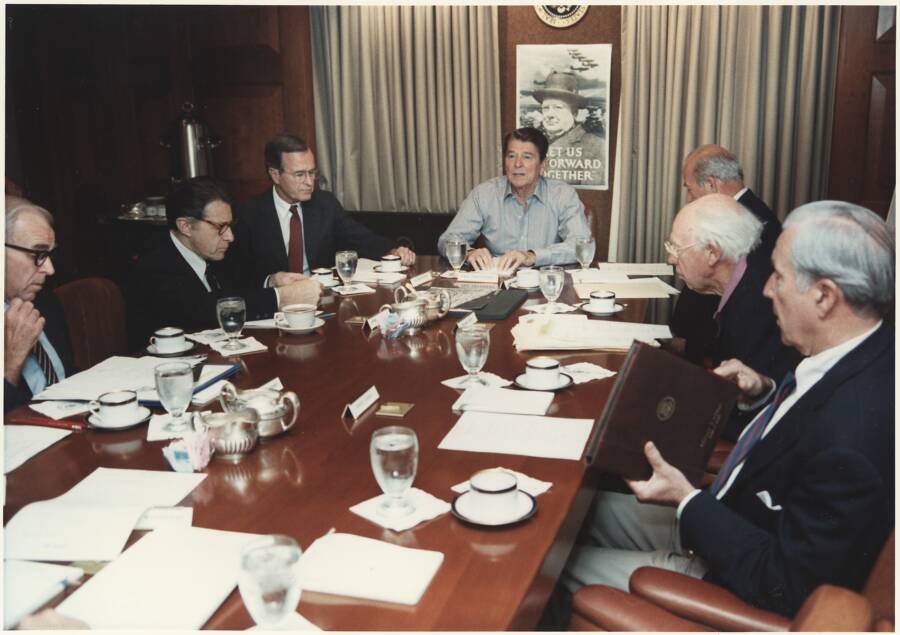 Wikimedia CommonsDanny Casolaro believed he’d found a connection between the murderous activities of the “Octopus” syndicate and the election of Ronald Reagan.

The Inslaw case introduced Casolaro to a hidden world on the geopolitical stage. He began a deep dive into several issues, including the company itself, the Iran hostage situation being connected to Ronald Reagan’s election, Iran-Contra, and the collapse of the Bank of Credit and Commerce International.

Casolaro became engrossed, even obsessed, with his research about government involvement and connection between all these events. The papers found after his death included every bit of information he could get his hands on, including clippings of old newspapers, names of CIA employees, and even arms dealers.

He met with a source he referred to as “Danger Man” who connected the shadowy, disparate threads for Casolaro and even claimed to have information about what was really going on at Area 51 in Nevada. And soon, Casolaro began noticing a pattern of anonymous harassment that led him to believe he was on the right track.

Five days before his body was found, Danny Casolaro told an associate that he had been asked to write an article for Time about his research, which was later proven to be false. He also told his friends and family he had been receiving harassing and threatening phone calls all through the night, disturbing his sleep.

Casolaro also had a meeting with a friend about his financial situation, seemingly aggravated that he had yet to receive a book deal for his work, which he planned to name after the syndicate he was investigating: The Octopus.

The next day, Casolaro told his housekeeper that he was going on a business trip to nearby Martinsburg, West Virginia, and would be gone for several days. He packed a stack of papers into his briefcase and left in a hurry.

His housekeeper later told police he said he was going to meet a source who may be able to crack his case open, David Corn wrote in The Nation. She also answered several harassing phone calls after he left, one of which was a caller who threatened that Casolaro would be “fed to the sharks.”

Casolaro’s whereabouts for the next two days could not be traced beyond a few mentions from witnesses that said they had shared a quick meal or met briefly at the Sheraton. By all accounts, however, Casolaro did not appear suicidal. After telling his neighbor that he believed the source he travelled to see had blown him off, Casolaro went for coffee — and that was the last time anyone saw him alive. 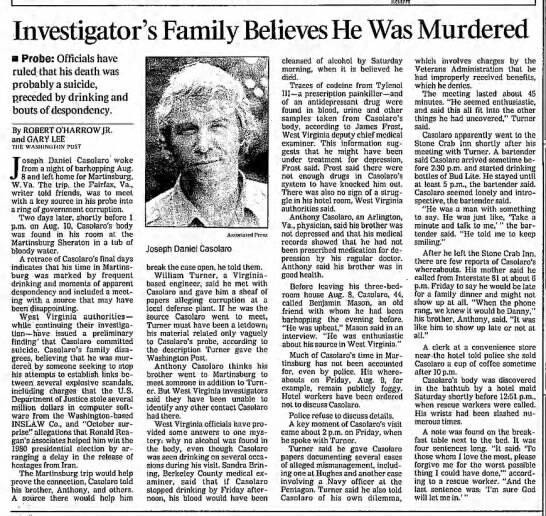 Sheraton Hotel housekeeping discovered Danny Casolaro’s body in the bathtub, his wrists slashed 12 times. Staff called 911, but Casolaro was already dead. Police found a beer can, trash bags, and a single razor blade at the scene, but nothing was done to stop any other evidence from going down the bathtub drain.

The rest of the room did not show any signs of struggle but a message, seemingly written by Casolaro, was found on a notepad on the table. Based on the note and the lack of any other evidence, his death was officially ruled a suicide.

His death continued to be a mystery. The press had a field day with conspiracy theories that only added to the confusion of what happened to the young journalist.

Investigations into the case later found that the FBI had requested further work in the case, as they were unsatisfied with the suicide ruling, and some of the documentation was withheld from the public without explanation.

Because there was no clarity from any investigation, Casolaro’s family still believes it could not have been a case of death by suicide. Casolaro, though in over his head with work, showed no signs of wanting or following through with self-harm.

His family has argued that the missing documents and the lack of follow-up with the harassing calls were enough to continue the investigation into what happened to Danny Casolaro. The intrigue has continued into the digital age, as many websites and journalists continue to be fascinated by the conspiracies of Danny Casolaro and “The Octopus” that may have led to his death.

After reading about Danny Casolaro, learn about The Montauk Project, the U.S. Military’s alleged mind control program. Then, read about 11 of history’s most famous suicides.