The man's body was found behind a wall put up to cover utilities in a women's bathroom. 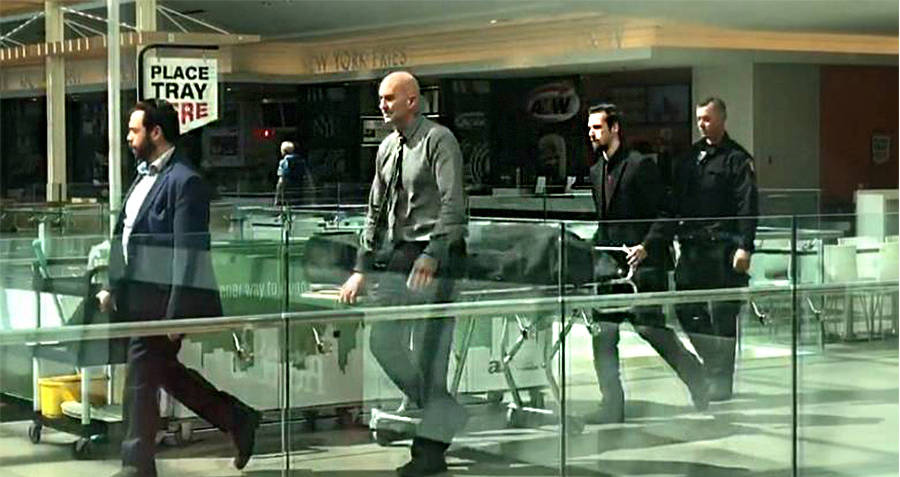 CBC NewsThe body is wheeled out of the restroom of the mall.

A Canadian shopping mall employee got the shock of his life on Monday when he found a dead body behind the wall of a women’s bathroom.

The employee had been called to the mall’s fourth-floor restroom to fix a toilet that reportedly wasn’t flushing. When the employee removed the wall panel behind the toilet, which conceals the motion sensors and utility pipes, he discovered the gruesome sight.

Police arrived at the Core Shopping Center, a luxury shopping mall in Calgary, around 9:30 a.m. to remove the body. According to police, the body was that of an adult male in his 20’s, though not much else about him is known yet.

Emma Poole, a spokeswoman for the Calgary Police Service, offered several theories on how the man found his way into the unusual space. She suggested that he may have been crawling through the ventilation system when he fell down into the space behind the wall.

“That would be the most logical — at this point is that it was from above,” she told the Canadian Press.

Police have also suggested that he climbed over the false wall behind the toilets. Known as a “pony wall,” the false wall hides the motion sensor flushing mechanisms, as well as plumbing and maintenance items. His motivations for entering the bathroom and climbing over the wall are unknown.

He likely entered the restroom Friday night, roughly three days before his body was found, and is believed to be alone at the time. The one thing they do know for certain is that the man’s death was accidental. Though the exact cause of death has not been revealed, foul play has been ruled out. After announcing that the death was accidental, the police said they would not be releasing any further details about the incident.

The shopping mall has given the employee who made the discovery some time off to “deal with whatever he may be going through.”

Next, read about Joyce Vincent, who was found dead in her apartment after going unnoticed for two years. Then, read about the man who was looking for a dead body in croc-infested waters, and got eaten.