Meet The Donut Dollies, The Unsung Women Who Gave Out Sweet Treats On The Front Lines

Inspired by a simple idea from female volunteers in 1917, the work of the Donut Dollies spanned decades and helped boost the morale of American soldiers during World War II and beyond.

Throughout history, the roles that American women have played during times of war have often been overlooked and misunderstood. The Donut Dollies are no different. 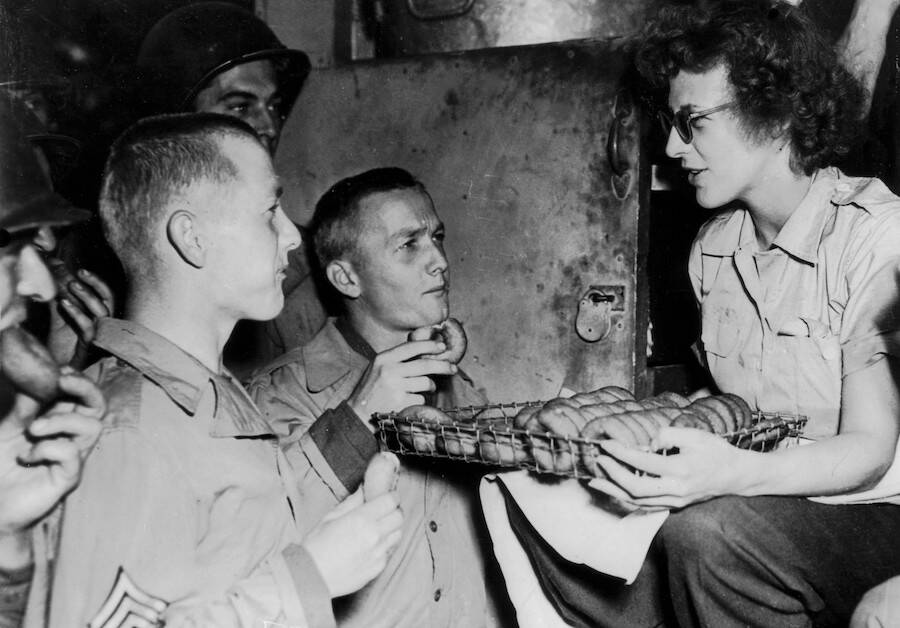 On a surface level, their roles seemed simple: provide wholesome entertainment and a “taste” of home to the young men fighting for their country.

But the Donut Dollies had so much more to offer than just sweet treats.

Who Were The Donut Dollies? 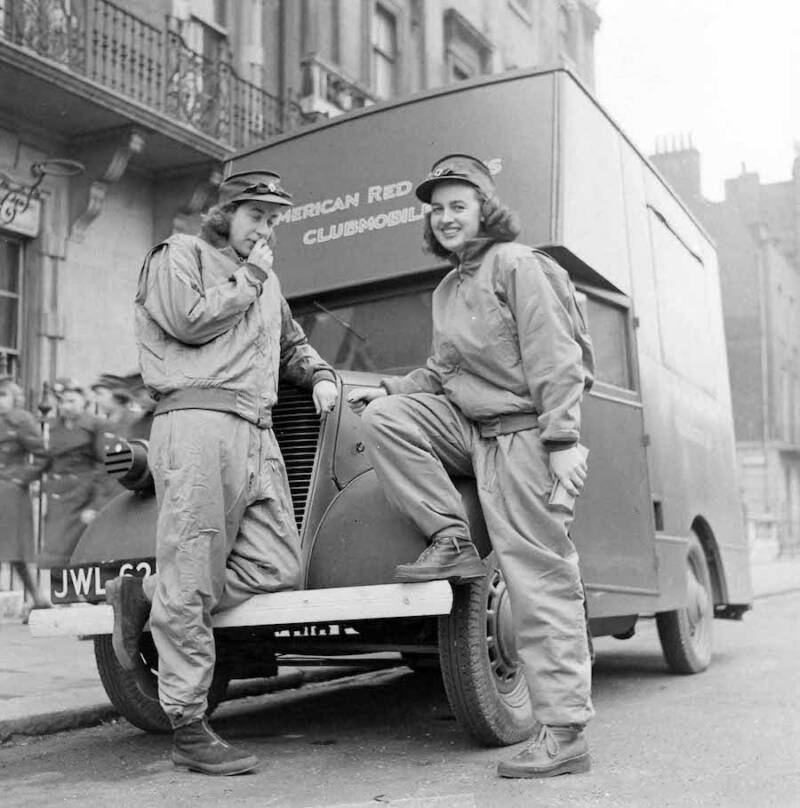 Getty ImagesWomen standing in front of the American Red Cross Clubmobile in England. 1940.

After the attack on Pearl Harbor on December 7, 1941, the Red Cross quickly mobilized to supply aid to wounded soldiers as needed. One aspect of this aid was maintaining troop morale. Enter the Donut Dollies.

Though the history of female wartime volunteers “who fried donuts and dodged bombs” actually dates back as far back as 1917, this practice was far more casual and relaxed during World War I.

By World War II, the American Red Cross sought out a very exclusive group of women to be Donut Dollies. Experts say the standards for these female volunteers were even higher than the standards of the actual military.

These women were required to be at least 25 years old, college-educated, and able to provide recommendation letters and pass physical exams. Oh, and they also needed to have an “outstanding personality.”

Only one out of six applicants made the final cut.

Once a new Donut Dollie was officially accepted, she would receive immunizations, get fitted for Red Cross uniforms, and undergo several weeks of basic training in the history, policies, and procedures of both the Red Cross and the U.S. Army.

She also received a very specific dress code on how to wear her uniform — no earrings, hair ornaments, “brilliant nail polish” or “excessive use of cosmetics.”

After a Donut Dollie completed her training, she was sent overseas, where she would often operate a “Clubmobile,” which was basically a mobile army clubhouse that was able to travel directly to soldiers stationed at faraway bases or camps in the field.

These single-decker green buses were outfitted with the equipment Donut Dollies needed to make fresh donuts right on the spot for hungry troops. 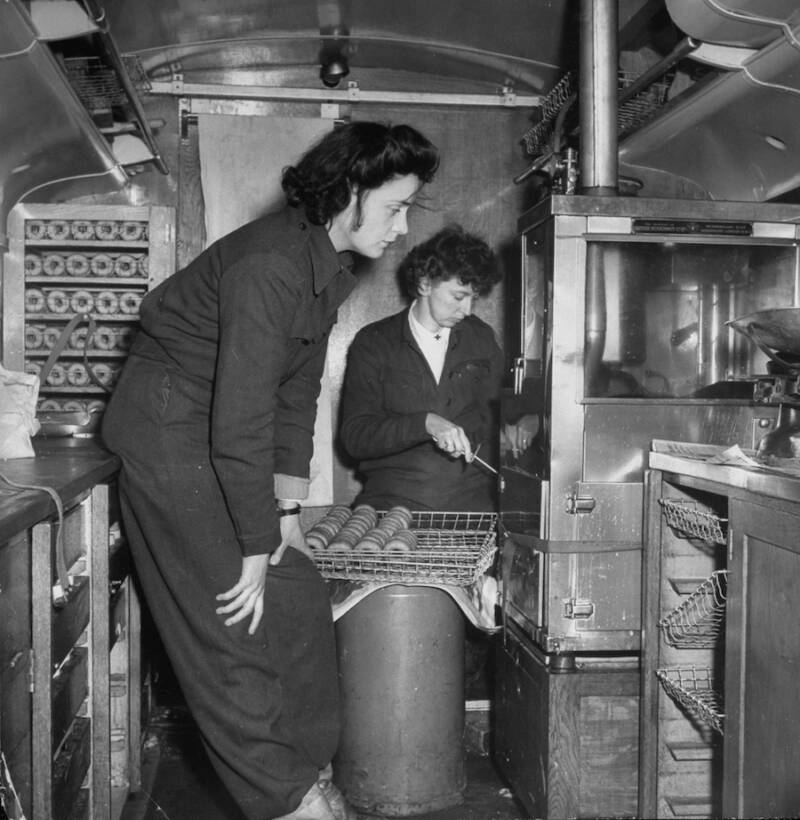 Getty ImagesDonut Dollies trying to fix a broken-down donut machine in a Clubmobile.

During World War II, the Doughnut Corporation of America loaned 468 donut machines to the Red Cross. Each machine could yield about 48 dozen donuts per hour. Yet as the war raged on, the machines proved to be inefficient at keeping up with the high demand for the fried treats.

One volunteer, Clara Schannep Jensen, wrote in a letter to her family back home: “The day before yesterday we spent the whole day making doughnuts. They were pretty good, too.”

Eventually, the Red Cross was forced to open up a handful of centralized bakeries in order to keep the Clubmobiles stocked. According to one report from late 1944, a total of 205 women had served well over 4.6 million donuts to soldiers in Great Britain.

As Jensen noted in another letter to her family: “[I] have quite a responsible job and am quite thrilled that they felt I could handle it.”

In addition to donuts, the Clubmobiles were also stocked with cigarettes, magazines, chewing gum, and newspapers that provided an additional sense of normalcy for all of the homesick soldiers.

To make up for the fact that those in the field were unable to visit more permanent recreation clubs in cities such as London, the buses were also equipped with speakers in order to play music out loud.

The back portions of the Clubmobiles could also open up into makeshift lounges, fitted with seats where soldiers could sit and talk amongst themselves and perhaps even flirt with the beautiful young women who made the donuts.

The Donut Dollies Of Vietnam And Korea 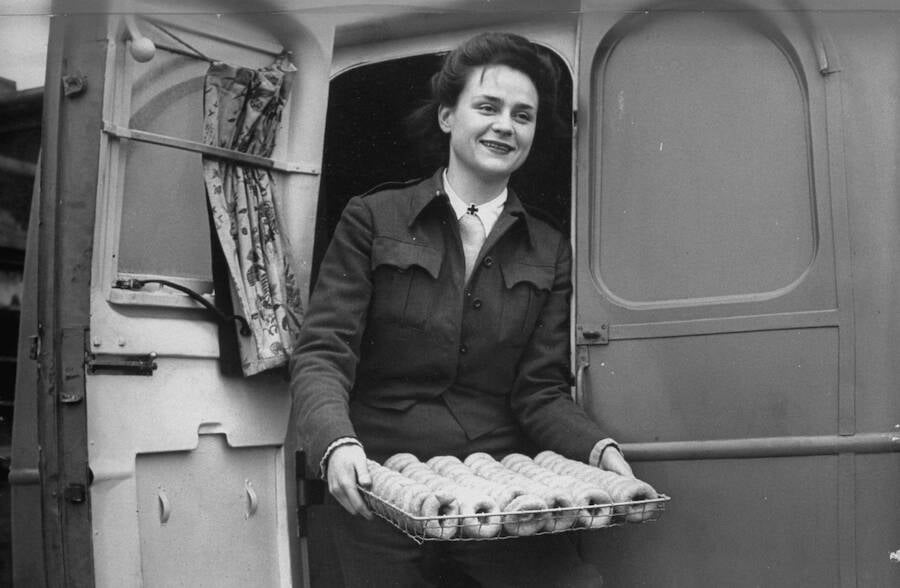 After World War II, Donut Dollies offered their services during the Korean War and the Vietnam War as well. A total of 899 Donut Dollies served in South Korea from 1953 to 1973.

“Everywhere we went, we took donuts, fresh baked daily by Korean bakers, for the troops,” said volunteer Patricia Lorge. “This was, no doubt, meant to bring a little bit of home to the troops.”

She added, “We went to the troops; we visited small, isolated locations, where they didn’t have a chance to go anywhere or relax.”

Meanwhile, 627 women served as Donut Dollies in Vietnam from 1962 to 1973. During the Vietnam War, however, the focus began to shift from donuts to recreational activities.

“We really did not make donuts and deliver them to the field in Vietnam,” volunteer Debby MacSwain said. “In fact, I only saw one donut during my year-long deployment. It was given to me by an Army Sergeant and I ate it!”

But even though the Donut Dollies stopped making their namesake pastries, they were certainly no less busy than they were before. They provided a wide range of entertainment, including sing-a-longs, ping pong, and pool tournaments.

They were ready to serve up smiles — even when they didn’t feel like smiling themselves.

The Challenges And Dangers 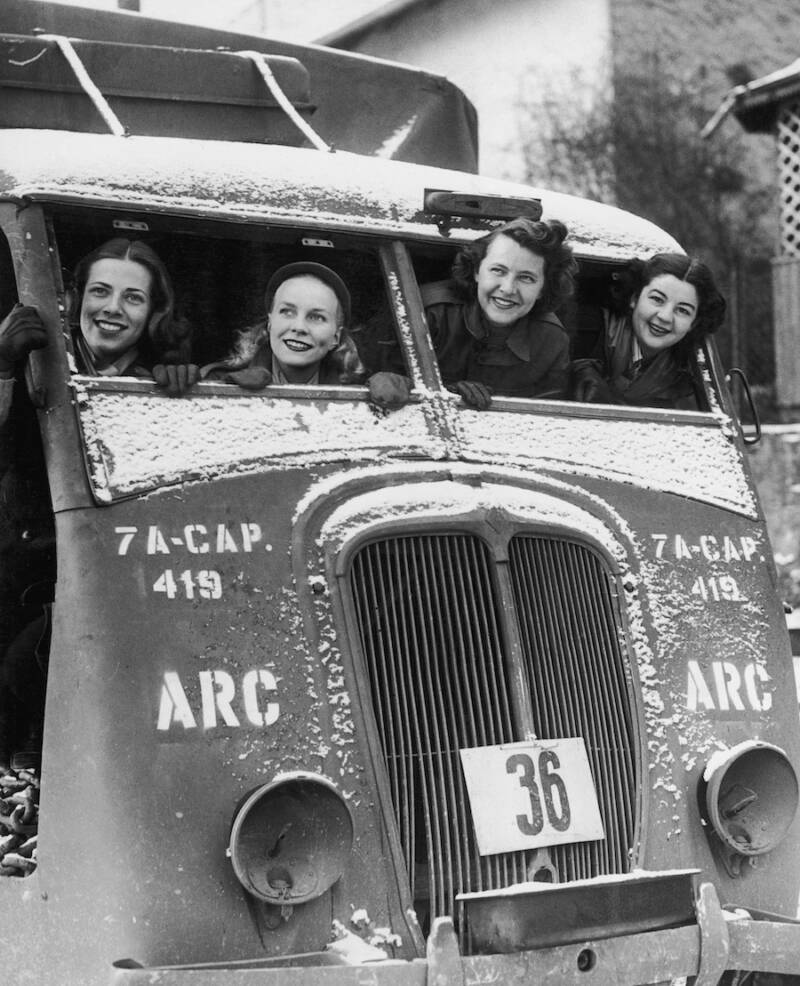 Getty ImagesDonut Dollies in a captured German vehicle in France during World War II. Circa 1942.

“As ‘Donut Dollies’ our job was to lift the guys’ spirits,” said Jeanne Christie, who volunteered during the Vietnam War. “That was easier said than done. We brought a little bit of home with us, we’d listen to them. We’d play games and records at the base rec centers.”

However, she acknowledges that the experience was far from perfect.

“It wasn’t easy being a Donut Dollie,” Christie admitted. “Some people thought we were just there to tease men. We were wrong, or bad, because we were over there. If you got pregnant, it was your fault, you asked for it.”

That was certainly a lot of pressure, especially since according to the book Beyond Combat: Women and Gender in the Vietnam War Era, the Donut Dollies were expected to be “nonsexual symbols of purity and goodness.”

Add that to the pressure of trying to help fearful soldiers while feeling fearful of their own safety. After all, three young women had their lives cut short during their time serving the war effort overseas in Vietnam.

Hannah E. Crews died in a Jeep accident, Virginia E. Kirsch was killed by a U.S. soldier who was high on drugs, and Lucinda Richter died from a degenerative nerve disease known as Guillain-Barre Syndrome.

While Vietnam volunteer Linda Sullivan Schulte was lucky enough to avoid any serious issues overseas, she explained, “We all had incidents like getting gassed, watching occasional rockets come into the base, and sniper fire.”

While the number of men who lost their lives on the battlefront far outnumbered the women, the Donut Dollies also showed tremendous courage and selflessness during times of vast national uncertainty.

While donuts are a quintessential American culinary experience, the Donut Dollies are also an American phenomenon — full of phenomenal women.

Inspired by a simple idea from female volunteers during World War I, the work of the Donut Dollies spanned decades thanks to the tenacity and kindness of American women. So they surely deserve recognition for their work in the same way that troops do.

While nurses treated the physical injuries, Donut Dollies tended to psychological wounds. Long before the vocabulary surrounding PTSD came to be widely accepted, the Donut Dollies were there to listen, there to support, and there to try to understand.

While they may not have brandished guns or crawled through the trenches, these women held the line on the emotional battlefield.