Meet The Banana Spider: The Arachnid Whose Web Is Made Out Of The Strongest Material Known To Man

The golden-colored silk of the banana spider — the aptly named golden silk orb-weaver — is stronger than steel and tougher than Kevlar.

The golden silk orb-weaver, also known as the banana spider, is easily identifiable by its long lanky legs, brown or yellowish hue, and unique golden web.

The golden-colored silk that the banana spider produces is one of the most impressive biological materials known to man. Its silk is five times stronger than steel, tougher than Kevlar, and more flexible than nylon.

Yet, the silk is incredibly lightweight; like a real-life version of the silk our friendly neighborhood Spiderman shoots out in the movies. 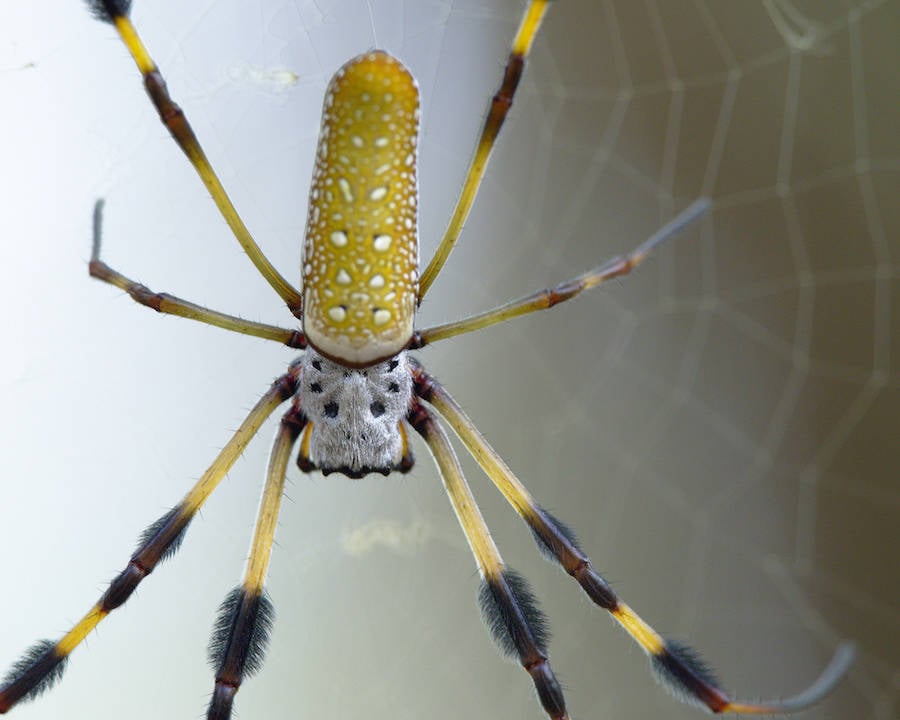 Robert Bieber/FlickrThe banana spider, or golden silk orb-weaver, appears intimidating but its venom is only mildly toxic to humans.

Besides its sturdy webbing, another distinct characteristic of the banana spider is its fairly docile behavior toward humans. Despite their menacing looks banana spiders rarely pose a serious threat to us since their venom is only mildly toxic to people.

Indeed, these spiders are known among arachnid experts to be gentle giants and will seldom bite humans.

Banana spiders are known for their unique webs.

Globally, the Nephila spider genus thrives in warmer regions like Australia, Asia, Africa, including Madagascar, and the Americas. In the U.S., the giant silk spider N. clavipes can be found in the southern parts of the country where it is typically warmer.

This type of silk spider is dreaded by avid gardeners and hikers during the late summer when its incredibly resistant webs usually appear seemingly out of thin air. If a person is bitten by a banana spider they might experience symptoms such as mild local pain, numbness, swelling, and nausea.

One of the most unique traits of the banana spider is its web-spinning abilities. Webs spun by the banana spider are easily recognizable due to its golden-yellowish silk color which is where its other name, golden silk orb-weaver, comes from.

Scientists believe that the shiny coloring of its web is meant to attract bees when its strands reflect the sunlight. The color also blends in perfectly with the surrounding foliage, which makes its web almost invisible to see in darker and shadier conditions.

Another marker of the banana spider’s web is the unbelievable strength of its silk. The tough material, which is practically unbreakable by meddling human hands or strong gusts of wind, makes it easier for the banana spider to catch unassuming prey. The golden silk orb-weaver’s favorite feeding options include flies, beetles, and dragonflies. 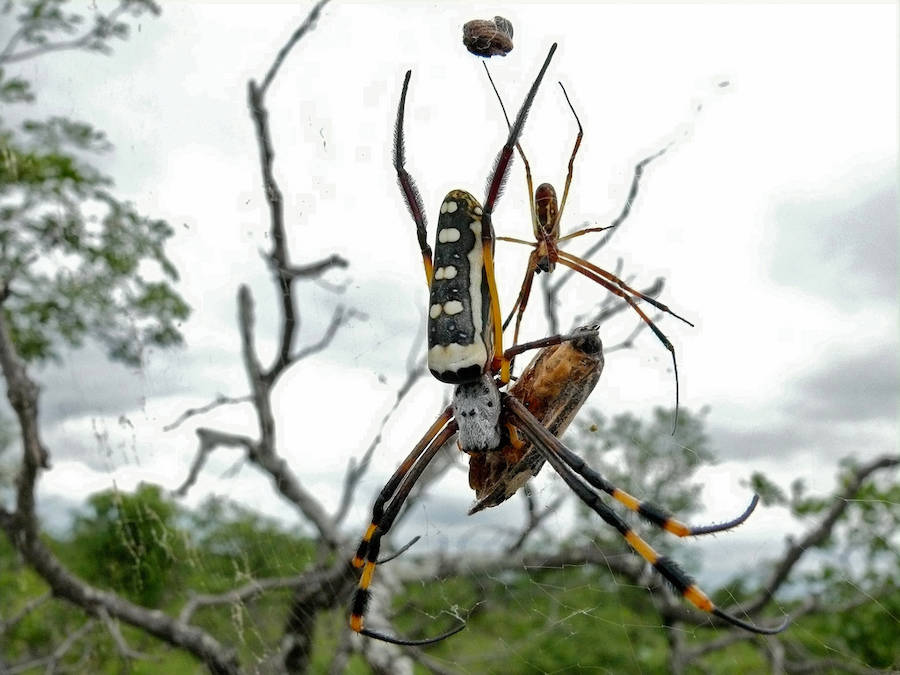 Bernard DUPONT/FlickrThe banana spider’s web is so large and strong that larger prey, like bats and birds, can get caught in it, too.

The material of the golden silk orb-weaver’s web is so resistant that it is used by hunters in New Guinea as the base material to make fishing nets. Researchers and military forces have even tried to replicate the spider silk’s durability to no avail. French industrialists of the 1700s tried to commercialize the material for the textile industry, but the effort was unsustainable.

In 2009, a golden robe garment was successfully made by designer Nicholas Godley using the spider’s extremely rare silk as thread. The silk for the unique textile was gathered from more than 1 million spiders and took four years to finish. It was subsequently exhibited at the American Museum of Natural History.

“If you do feel these fringes, they sort of float up in the air on top of your hands, and yet they’re incredibly strong,” Museum Curator Dr. Ian Tattersall said. “It goes to show that it is possible to bring back a really complex tradition of this kind from the dead.”

A golden robe made out of the rare spider silk was exhibited at the American Museum of Natural History.

Banana spiders are avid weavers, so they tend to spin webs that are quite large in size. The orb-like portion of its web can reach more than three feet wide, with support strands measuring another several feet.

As far as web-spinners go, the golden silk orb-weaver is also unique in that the adults regularly destroy then rebuild portions of their webs. Experts believe that this behavior might be a way that the banana spider prevents parasites from stealing its food.

Banana spider webs are highly susceptible to a phenomenon called kleptoparasitism in which other creatures steal their prey. Small silver-colored spiders known as Argyrodes Simonroutinely invade the banana spider’s home so that they can discreetly take and feed on its tied up prey. As many as 30 of these kleptoparasites have been recorded in a single web of the N. maculata species.

They Molt As They Get Older 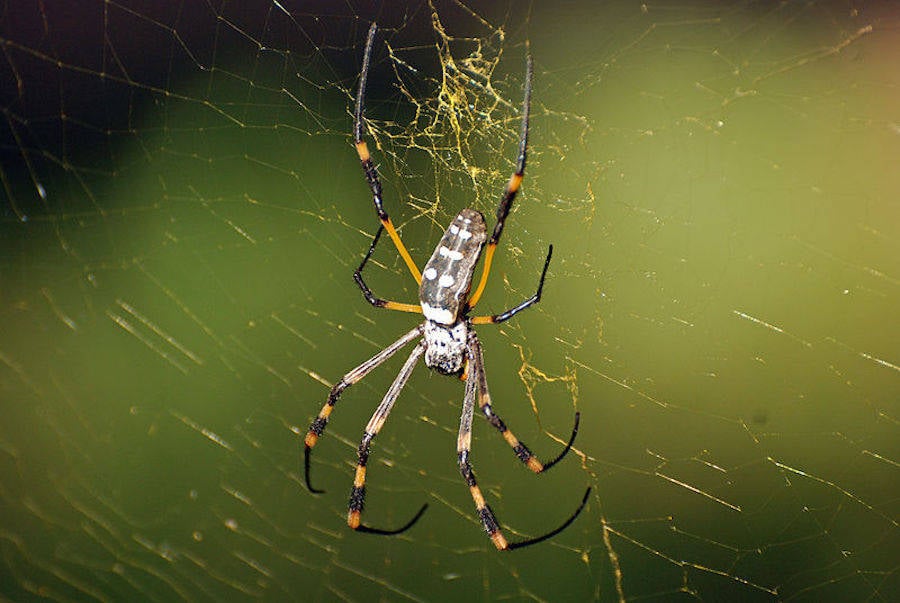 Banana spiders have a short life span, traditionally up to a year. But the journey to spider-adulthood for these juveniles is pretty fascinating.

Adult spiders typically lay eggs between August to October and the eggs will hatch about a month later. Thanks to the strong silk case of the eggs, the baby banana spider is safely enclosed inside where it will spend the winter.

By the time spring rolls around, the young spiders will leave their egg cases and share a communal web for about a week. They usually steal food from each other or eat any dead siblings. Finally, the juvenile spiders will go out to weave their own individual sticky homes.

As the juvenile spiders grow, they begin the process of molting. This is common among some species of spiders and happens when the exoskeleton of a young spider’s body is no longer able to accommodate its growth so the spider sheds it.

For the banana spider, molting can occur as frequently as seven to 12 times by the time mating season rolls around and then the banana spiders are fully grown and don’t need to molt anymore. At this time, they are also ready to start breeding.

Females Are Much, Much Bigger Than Males 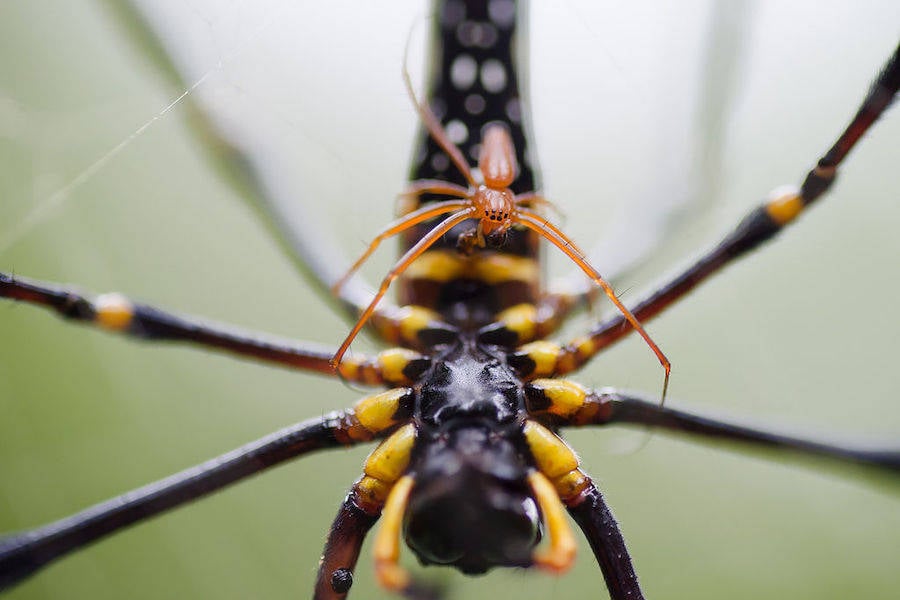 Wikimedia CommonsFemales can outsize the males by ten times.

Like other types of spiders, distinguishing between females and males is fairly simple. Female banana spiders tend to span about three inches, not counting their long legs. In fact, female banana spiders have been known to reach a leg span of almost five inches.

There is a lot of diversity among silk spiders, even among the same kinds. One study found that the female banana spider can have up to seven morphologically differentiated types of silk glands, which are believed to produce a distinct class of silk.

Similar to how one person’s fingerprints are never the same as another person’s, each female banana spider produces her own distinct strand of silk with biophysical characteristics that come from a unique combination of silk genes in her glands.

By comparison, male banana spiders are visibly much smaller and thinner at about an inch long. This severe size imbalance among male and female banana spiders means that a female can measure up to ten times the size of her mate. It might make for an odd pairing, but it works.

Another common arachnid behavior that exists among banana spiders is the tendency for females to devour their partner while they mate. So male banana spiders of the N. pilipes genus employ a special trick to avoid being eaten during sex.

Mate-binding happens when a male spreads silk over the female’s dorsum or back in massage-like movements. The idea of mate-binding is to entice the female to be more receptive to courtship, which involves multiple mating sessions between the spider lovers. Not only does the binding help the male avoid getting eaten by his mate, mate-binding also helps ensure that the female is successfully inseminated.

Though the life of a banana spider is short, it does include courtship via backrub, which frankly, doesn’t sound so bad.

After reading about the golden silk orb-weaver, learn about the helicopter spider that nurses its spiderlings with milk that is four times richer than cow’s milk. Then, check out five surprising spider facts that you probably didn’t know.