He Was Hollywood’s Favorite Native American, But Iron Eyes Cody Wasn’t Native At All

As Hollywood’s go-to Native American, Iron Eyes Cody was a common sight in Western movies for nearly 60 years. From starring in his first uncredited roles in the early 1930s, Cody would go on to appear in dozens of celebrated films as America’s beloved sage.

His early roles were usually credited as “Indian” or “Indian Chief” and it wasn’t until Iron Eyes played in 1948’s Paleface with Bob Hope and Jane Russell that he was finally given a name for his character, the one which would stick for rest of his film career: Chief Iron Eyes. 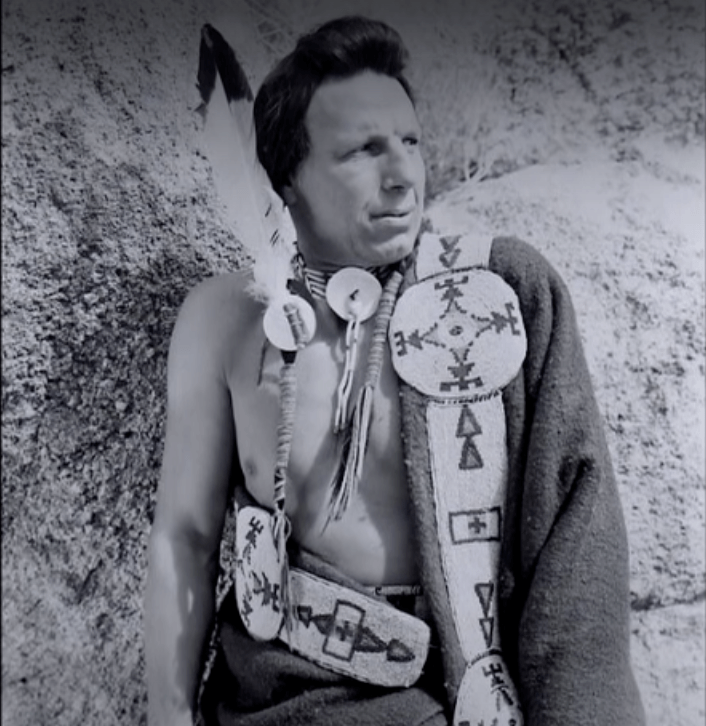 Youtube“America’s Favorite Indian” was actually not Native at all but rather an Italian immigrant.

He went on to be type-cast as some 100 more sage Native Americans throughout his film career, but what many didn’t know was that Iron Eyes Cody wasn’t Native American at all.

Typecast As The Virtuous Native American

The movie star claimed in his autobiography that he was originally born Oscar Cody, sometimes called “Little Eagle,” on a farm in Oklahoma territory. His mother Frances was a “typical Cree Indian” who was “strict with us in the sense of observing customs and propriety.” 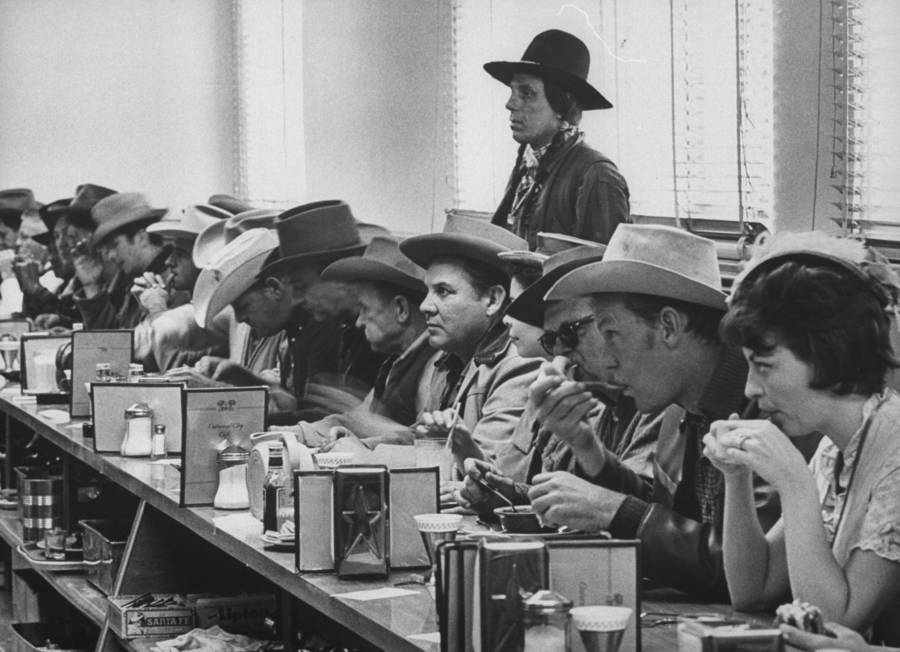 John Dominis/The LIFE Images Collection/Getty ImagesIron Eyes Cody waits for a seat behind dozens of cowboy extras during lunch break in filming of a Western movie at Universal Studios.

His father, allegedly a Cherokee named Thomas Longplume Cody, was responsible for his son’s entry into show business after he uprooted the family to Hollywood where he worked as a technical adviser for Western films. Over the next five decades, Iron Eyes Cody would go on to act in over 100 films, most of which were Westerns. He worked alongside some of Hollywood’s biggest actors and directors, including John Wayne, Steve McQueen, John Ford, and Cecil B. DeMille.

Meanwhile on the small screen, Cody would appear in the TV Western classics Bonanza, and Gunsmoke, and took a break from Westerns to make cameo appearances in the comedy shows Mister Ed, The Lucy-Desi Comedy Hour, and Mister Rogers’ Neighborhood.

In 1983, he received a star on the Hollywood Walk of Fame. His substantial body of work that spanned from the 1930s to the 1980s would lead to Cody being dubbed “America’s Favorite Indian.” 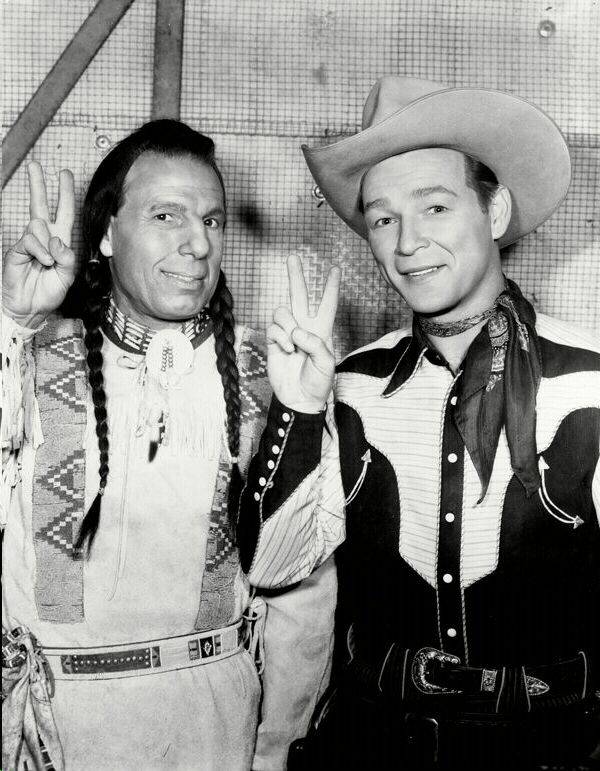 Though Cody’s heritage would prove phony, his contributions to Native American culture were true and generous.

He leveraged his fame to act as a cultural ambassador to Native Americans and sought to correct common misconceptions and stereotypes about who he claimed to be his people and his heritage. For example, Iron Eyes would often persuade directors to show Native Americans as complex characters rather than the silent warrior stereotype that was more popular of the day. 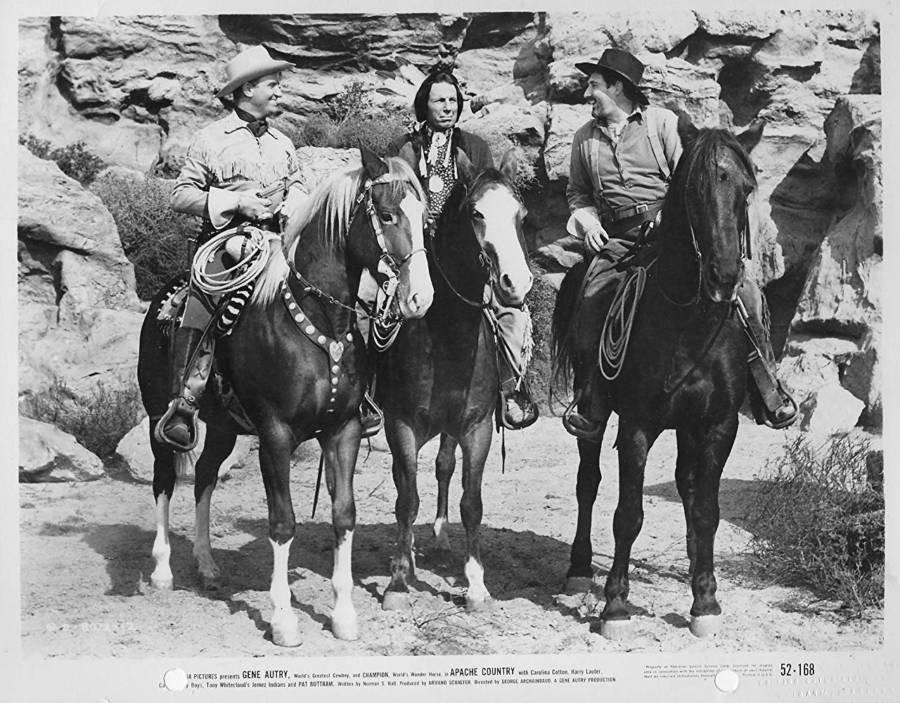 As the Western film genre began to fade in popularity in the 1970s, Cody’s life took on a different trajectory. The long-time adversary of the cowboy, the strong but silent Indian brave, was falling out of fashion. At the same time, the environmental movement was picking up steam with the first Earth Day being celebrated in 1970.

Supported by the hippie movement, Native Americans were beginning to be recast as peaceful, nature-loving individuals. Iron Eyes Cody would become the poster child for this new stereotype. In perhaps his most iconic appearance, Cody starred in 1971’s public service announcement to reduce litter called “Keep America Beautiful.” This minute-long ad brought Iron Eyes Cody into the living rooms of millions of Americans.

The commercial, which featured Cody paddling a canoe and shedding a tear over the pollution of America, would become one of the most famous in television history.

The commercial was played so often that stations actually wore out the tapes. Even today, Americans who may not have seen the full PSA are familiar with the famous “Crying Indian” who helped bring the environmental movement to the forefront of mainstream discussion. Funnily enough, Iron Eyes Cody originally refused to do the commercial that would seal his place in pop-culture history, famously claiming that “Indians don’t cry.” Regardless, the PSA was a tremendous hit and Iron Eyes Cody was cemented forever in the American imagination as a sage-like Native American.

There was, however, just one problem. Hollywood’s most famous Indian wasn’t Native American at all.

Iron Eyes Cody Revealed To Be A Fraud 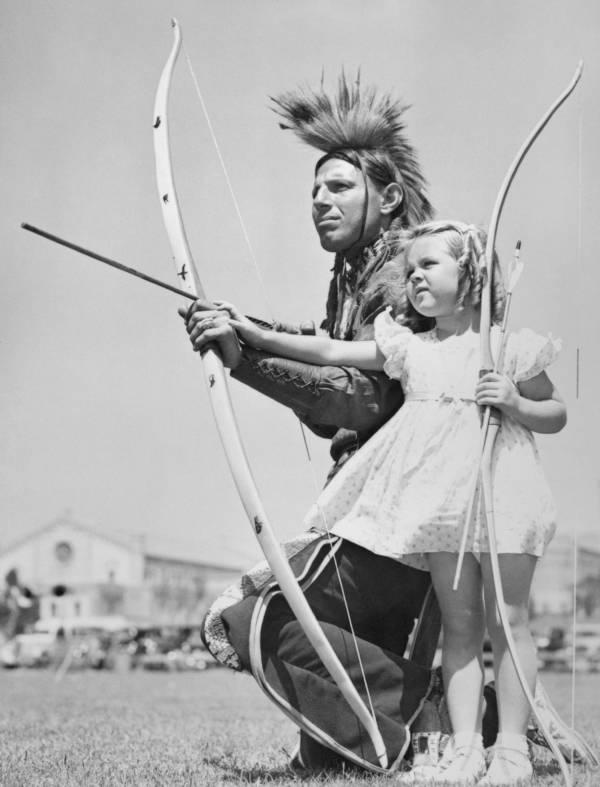 In 1996, the Times-Picayune newspaper published a report that revealed some surprising truths about Iron Eyes Cody’s ancestry. Far from being one of America’s original inhabitants, Cody was the son of two Italian immigrants. Antonio DeCorti and his wife Francesca, nèe Salpietra, had come to New Orleans around the turn of the 20th century. Together the couple had four children, of whom Espera de Corti, sometimes called “Oscar,” was the second oldest, born on April 3, 1904.

Although baptism and immigration records were revealed to the public in this report, Cody denied it. When the Times called him with the facts they had unearthed, he replied, “You can’t prove it. All I know is that I’m just another Indian.” The paper was, however, able to track down Cody’s half-sister May Abshire who could, in fact, prove it.

According to Abshire, Cody’s transformation began after his father was forced to flee to Texas after a run-in with a mafioso there. Cody’s father changed his name to “Tony Corti” and was soon joined by his sons. After his death, Oscar and his brothers decided to fully anglicize their surname, changing it to “Cody.” Next, they moved to Hollywood to try their luck in motion pictures. 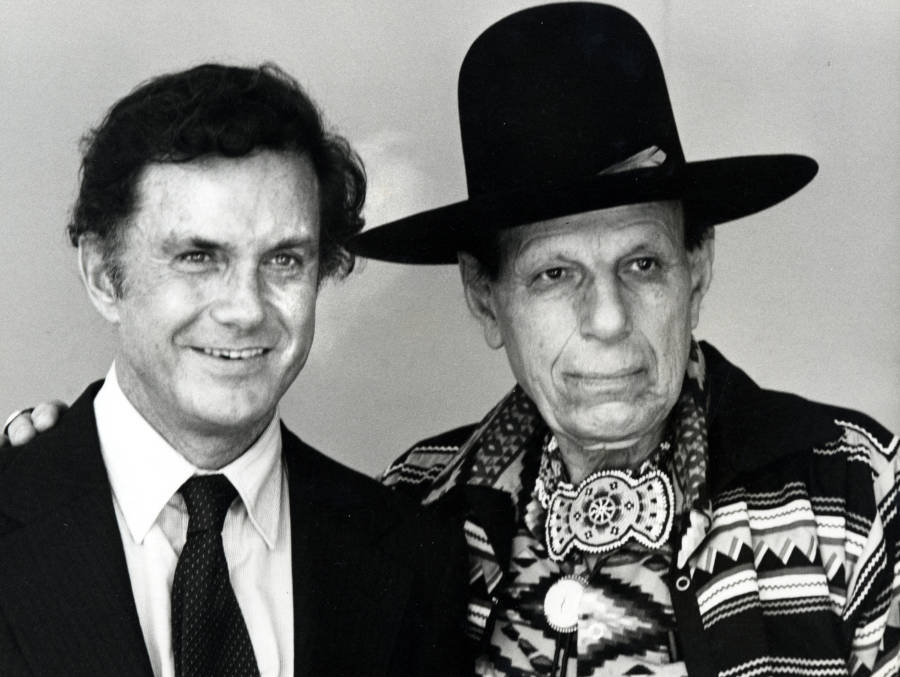 From today’s perspective, it may seem counterintuitive that a European immigrant would pretend to be Native American. After all, this was an ethnic group whose oppression and near-annihilation had been well-documented. But the truth of the matter was that in the late 19th and early 20th century, Italian immigrants fared little better than Native or even African-Americans who called the U.S. home.

Indeed, after slavery was abolished, Italian immigrants in Louisiana, including Cody’s parents, often replaced enslaved African-Americans as workers in the sugar cane fields. The newly-arrived immigrant population replaced the former slaves not only as laborers but also as objects of local prejudice.

The tensions often erupted into violence, as in 1891, when a New Orleans mob hanged 11 Italian men. The lynching was the largest in American history and even caused Italy to cut off diplomatic relations with the United States.

As such, it’s not surprising that many Italians attempted to hide their heritage just like Cody. According to Abshire, Cody “always wanted to be an Indian,” perhaps because “he sympathized with an oppressed people and knew firsthand of hardship and persecution.”

The Hollywood of the 1930s had little use for dark-haired, dark-skinned actors, except of course as Native American extras. It would seem Espera Oscar de Corti’s had only shed one stereotype for another, but oddly, it was only after he “turned 100 percent Indian” that he found success.

Cody was so fully entrenched in his new persona that even after the Times article, he still remained “America’s Favorite Indian.” Even after his death in January of 1999, many of his obituaries in major newspapers backed Cody’s version of his origins.

Although his ancestry may have been fabricated, his commitment to the advancement of the Native American cause was genuine. In 1995, Hollywood’s Native American Community singled him out for honors for his “longstanding contribution” to their culture.

Despite the fact that he was not a Native, they insisted, “his charitable deeds were more important than his non-Indian heritage.”

After this look at America’s favorite Native American, the Italian Iron Eyes Cody, read about the mass lynching of Italian immigrants in New Orleans that nearly sparked a war. Then, read about a real Native American, Maria Tallchief, the Osage Indian who shattered stereotypes in the ballet world.