For years, Ed Gein holed up inside his dilapidated home in Plainfield, Wisconsin as he carefully skinned and dismembered his victims in order to fashion everything from a chair to a bodysuit.

Most people have seen classic horror films like Psycho (1960), The Texas Chainsaw Massacre (1974), and The Silence of the Lambs (1991). But what many may not know is that the terrifying villains in these three movies were all based on one real-life killer: Ed Gein, the so-called “Butcher of Plainfield.” 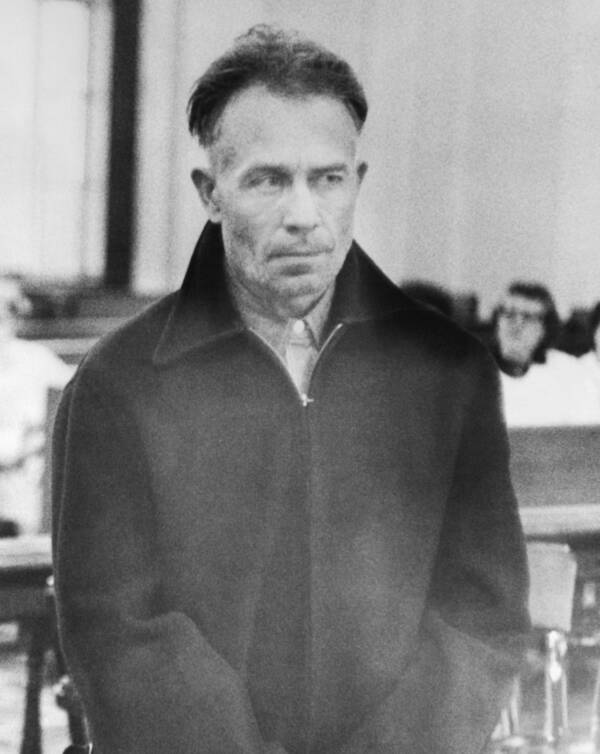 When police entered his Plainfield, Wisconsin home in November 1957, following the disappearance of a local woman, they walked straight into a house of horrors. Not only did they find the woman they were looking for — dead, decapitated, and hung from her ankles — but they also found a number of shocking, grisly objects crafted by Ed Gein.

Police found skulls, human organs, and gruesome pieces of furniture like lampshades made of human faces and chairs upholstered with human skin. Gein’s goal, as he later explained to police, was to create a skin suit to quasi-resurrect his dead mother with whom he’d been obsessed for years.

Born Edward Theodore Gein on Aug. 27, 1906, in La Crosse, Wisconsin, Ed came of age under the influence of his religious and domineering mother, Augusta. She raised Ed and his brother Henry to believe that the world was full of evil, that women were “vessels of sin,” and that drinking and immortality were the instruments of the devil.

Frantic to protect her family from the evil which she believed lurked around every corner, Augusta insisted that they move from La Crosse — a “sinkhole of filth,” she thought — to Plainfield. Even there, Augusta had the family settle outside of town since she believed that living in town would corrupt her two young sons.

As a result, Ed Gein only ever left his family’s isolated farmhouse to go to school. But he failed to establish any meaningful connections with his classmates, who remembered him as socially awkward and prone to odd, unexplained fits of laughter. What’s more, Ed’s lazy eye and speech impediment made him an easy victim of bullies.

Despite all this, Ed adored his mother. (His father, a timid alcoholic who died in 1940, cast a much smaller shadow over his life.) He absorbed her lessons about the world and seemed to embrace her harsh worldview. Though Henry sometimes stood up to Augusta, Ed never did.

So, it’s perhaps not a surprise that Ed Gein’s first victim was likely his older brother, Henry. 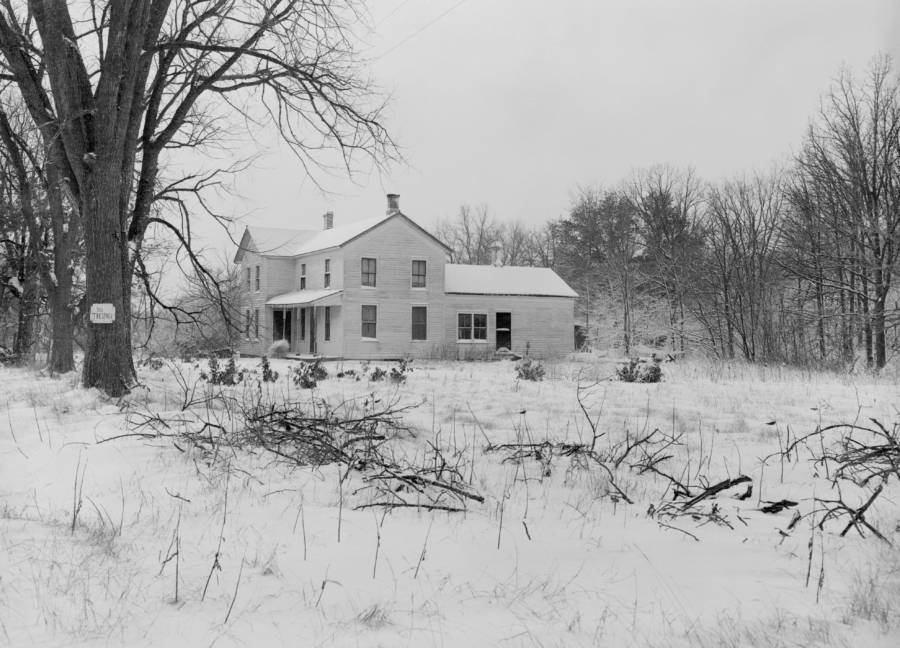 Bettmann/Getty ImagesEd Gein’s farmhouse, where he collected body parts for over a decade and used bones and skin to make gruesome objects.

In 1944, Ed and Henry set out to clear some vegetation in their fields by burning it away. But only one of the brothers would live through the night.

As they worked, their fire suddenly got out of control. And when firefighters arrived to put out the blaze, Ed told them that Henry had vanished. His body was found soon afterward, face down in the marsh, dead from asphyxiation.

At the time, it seemed like a tragic accident. But accidental or not, Henry’s death meant that Ed Gein and Augusta had the farmhouse to themselves. They lived there in isolation for about a year, until Augusta’s death in 1945.

Then, Ed Gein began his decade-long descent into depravity.

The Horrific Crimes Of The “Butcher Of Plainfield” 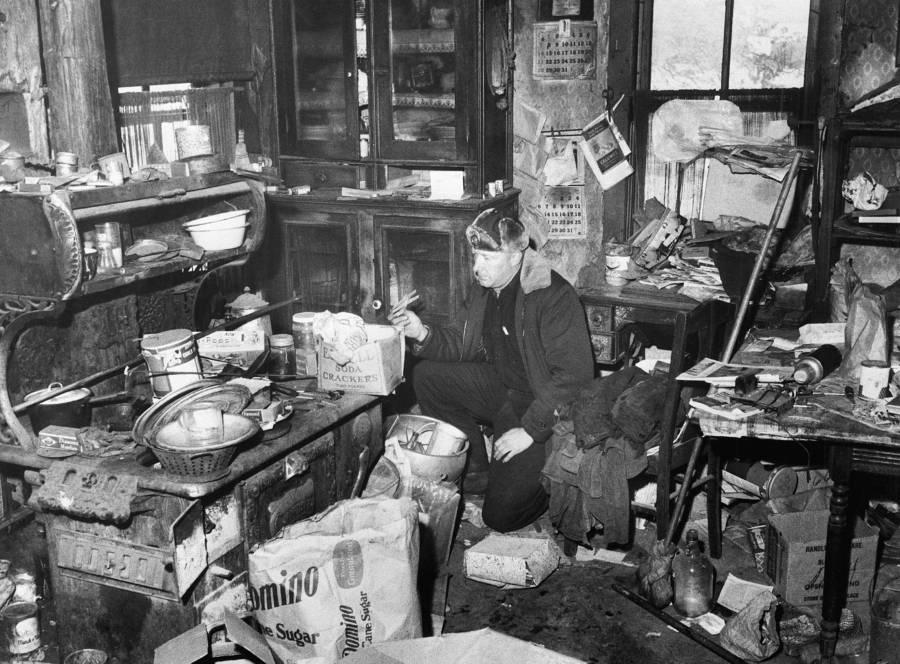 Bettmann/Getty ImagesThe interior of Ed Gein’s home. Though he kept some rooms pristine in memory of his mother, the rest of the house was a mess.

Following Augusta’s death, Ed Gein transformed the house into something of a shrine to her memory. He boarded up rooms that she’d used, keeping them in pristine condition, and moved into a small bedroom off the kitchen.

Indeed, for a full decade, no one thought much about the Gein farm outside of town. Everything changed in November 1957 when a local hardware store owner named Bernice Worden vanished, leaving nothing behind but bloodstains.

Worden, a 58-year-old widow, had last been seen at her store. Her last customer? None other than Ed Gein, who’d gone into the store to buy a gallon of antifreeze.

Police went to Ed’s farmhouse to investigate — and found themselves in the middle of a waking nightmare. There, authorities found what would later inspire horror movies such as Silence of the Lambs, Psycho, and The Texas Chainsaw Massacre. 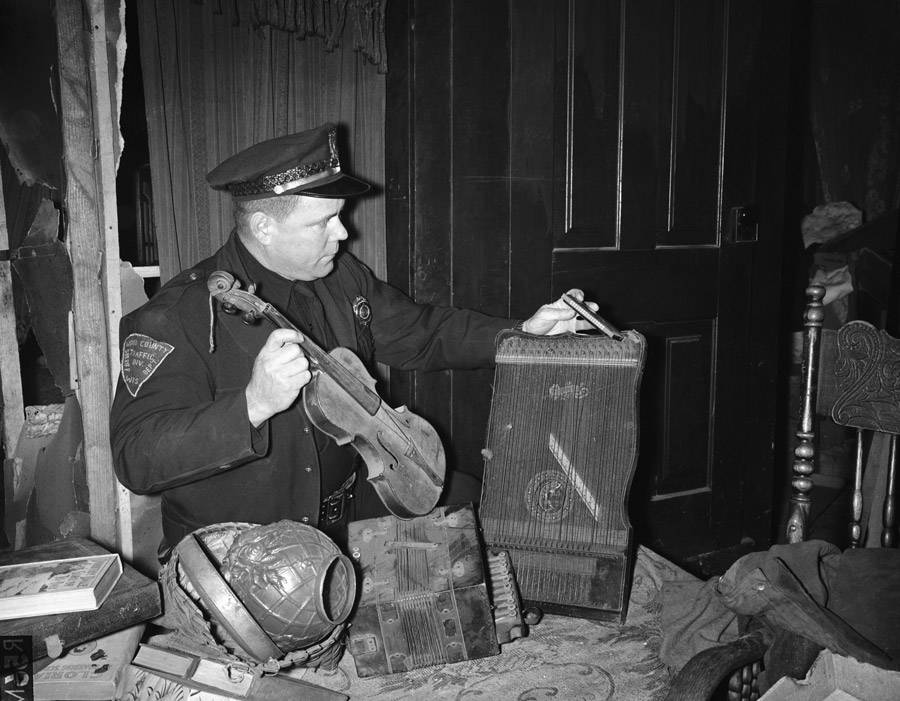 Getty ImagesTrooper Dave Sharkey looks over some of the musical instruments found in the home of Edward Gein, 51, suspected grave robber and murderer. Also found in the house were human skulls, heads, death masks and the newly-butchered corpse of a neighboring woman. January 19, 1957.

As soon as investigators stepped into Ed Gein’s house, they found Bernice Worden in the kitchen. She was dead, decapitated, and hung by her ankles from the rafters.

There were also countless bones, both whole and fragmented, skulls impaled on his bedposts, and bowls and kitchen utensils made from skulls. Worse than the bones, however, were the household items that Ed had made from human skin. 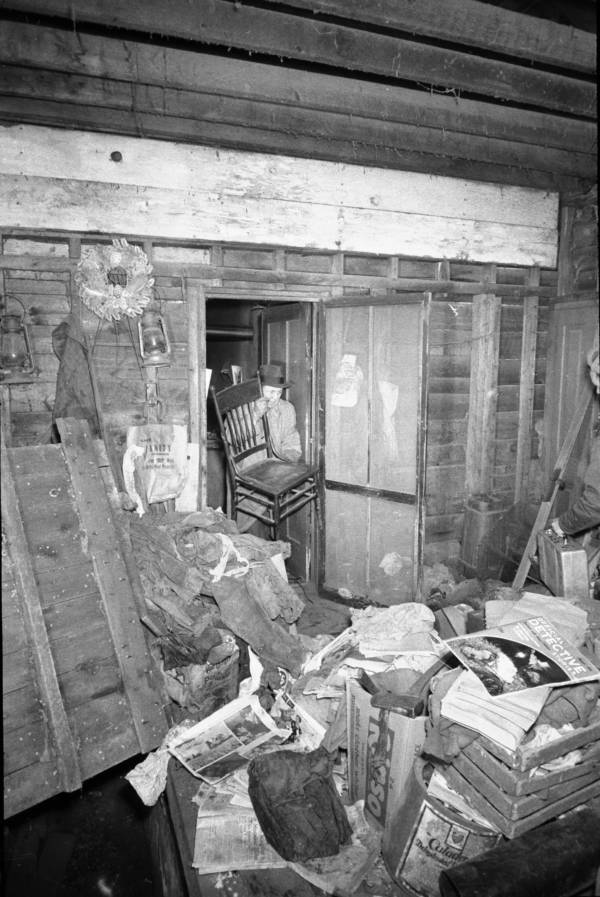 Authorities found chairs upholstered in human skin, a wastebasket made of skin, leggings made from human leg skin, masks made from faces, a belt made of nipples, a pair of lips being used as a window shade drawstring, a corset made of a female torso, and a lampshade made from a human face.

Along with the skin items, police found various dismembered body parts, including fingernails, four noses, and the genitals of nine different women. They also found the remains of Mary Hogan, a tavern keeper who’d gone missing in 1954. 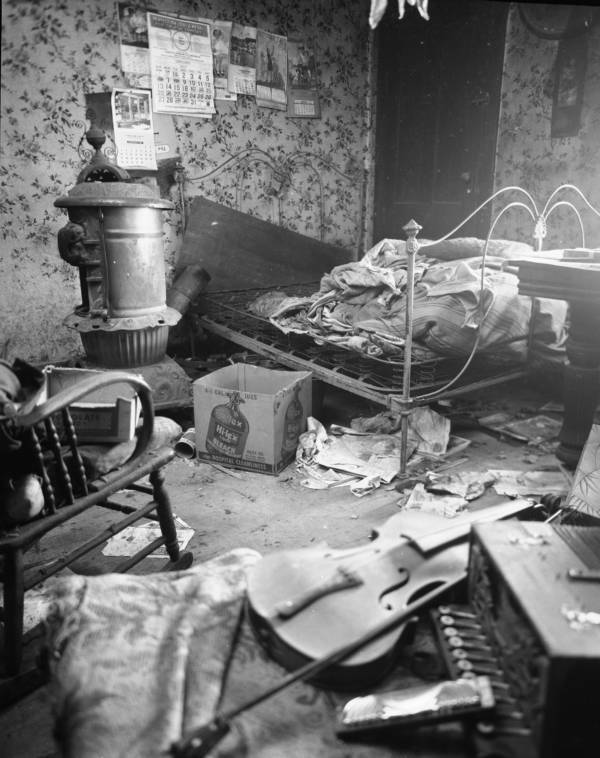 Ed Gein readily admitted that he’d collected most of the remains from three local graveyards, which he’d started to visit two years after Augusta’s death. He told police he’d gone to the graveyards in a daze, looking for bodies that he thought resembled his mother.

Ed also explained why. He told authorities that he had wanted to create a “woman suit” so that he could “become” his mother, and crawl into her skin.

How Many People Did Ed Gein Kill?

Following the police visit to Ed Gein’s house, the “Butcher of Plainfield” was arrested. He was found not guilty by reasons of insanity in 1957 and sent to the Central State Hospital for the Criminally Insane, where he was diagnosed with schizophrenia. Then, his farmhouse mysteriously burned to the ground. 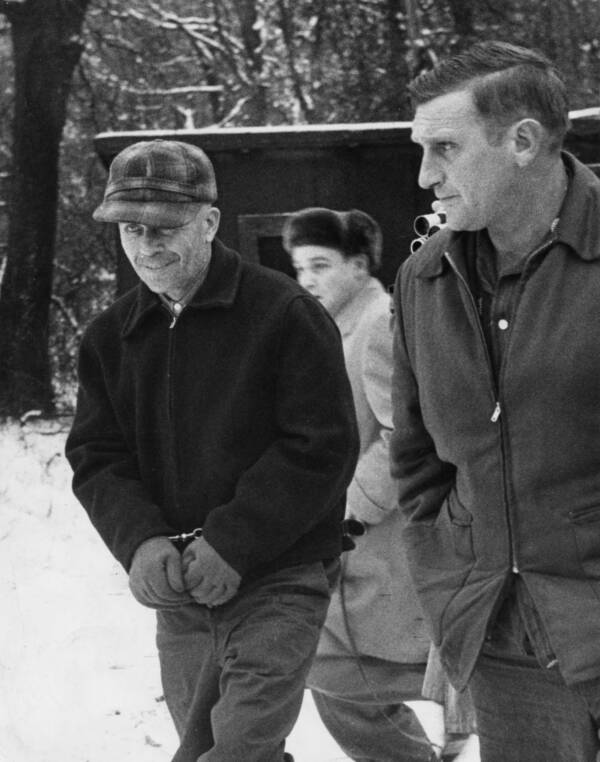 JOHN CROFT/Star Tribune via Getty ImagesEd Gein being led away from his house in handcuffs after admitting that he’d killed two women.

Ten years later, Ed was deemed fit to stand trial and was convicted of the murder of Bernice Worden — but just of Bernice Worden. He was never tried for Mary Hogan’s murder because the state allegedly saw it as a waste of money. Ed was insane, they reasoned — he would spend the rest of his life in hospitals either way.

But that raises a chilling question. How many people did Ed Gein kill? Until his death in 1984 at the age of 77, he only ever admitted to murdering Worden and Hogan. The other bodies — and police found as many as 40 in his home — he claimed he’d robbed from graves.

As such, we may never know how many people fell victim to the Butcher of Plainfield. But it is certain that Ed Gein stands as one of history’s most disturbing serial killers. He’s also seen as the inspiration for the mother-loving Norman Bates of Psycho, The Texas Chain Saw Massacre’s skin-wearing Leatherface, and The Silence of The Lamb’s Buffalo Bill.

Those movies have terrified generations of movie audiences. But they aren’t quite as chilling as the real-life story of Ed Gein himself.

After learning about the disturbing crimes of Ed Gein, read about still-unsolved case of the Cleveland Torso Murders. Then, read up on the horrific crimes of serial killer Jeffrey Dahmer.