Some of the things found in Ed Gein's house included a trash can and several chairs upholstered in human skin, a belt and corset of severed nipples, and human skulls made into bowls.

Serial killer Ed Gein may not garner quite the same immediate name recognition as, say, Ted Bundy, but what authorities found in Ed Gein’s house upon his capture was such a shock to 1950s America that his heinous acts reverberate with horror to this day.

For one, Gein had an unhealthy devotion to his dead mother — a characteristic that heavily influenced Robert Bloch’s 1959 novel Psycho and the subsequent film adaptation.

The killer’s penchant for decapitation, necrophilia, cutting off body parts, keeping victims’ organs in jars, and creating homemade chairs, masks, and lampshades with their skin became an essential component of the visceral terror portrayed in The Texas Chainsaw Massacre and The Silence of The Lambs. 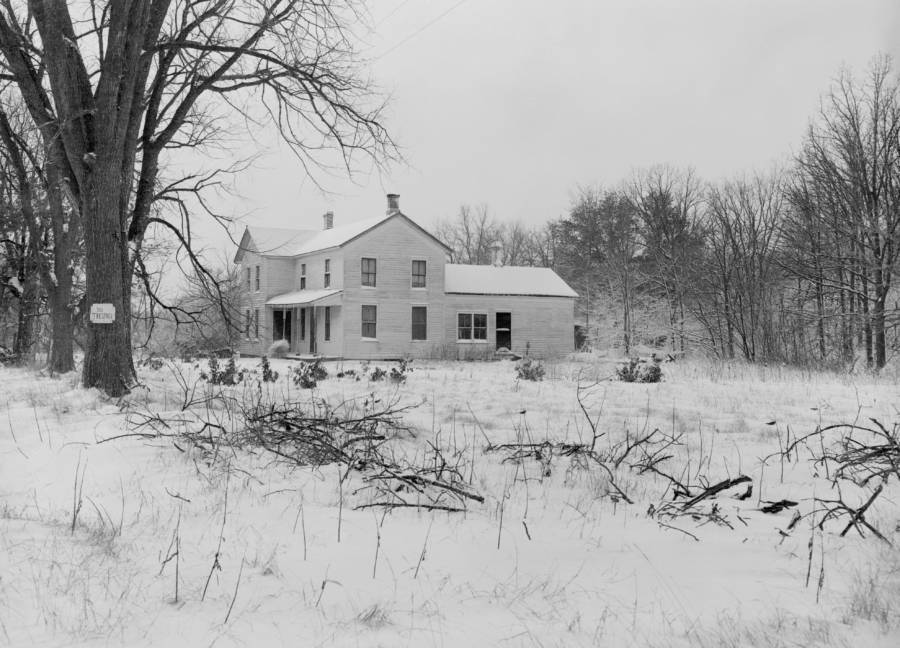 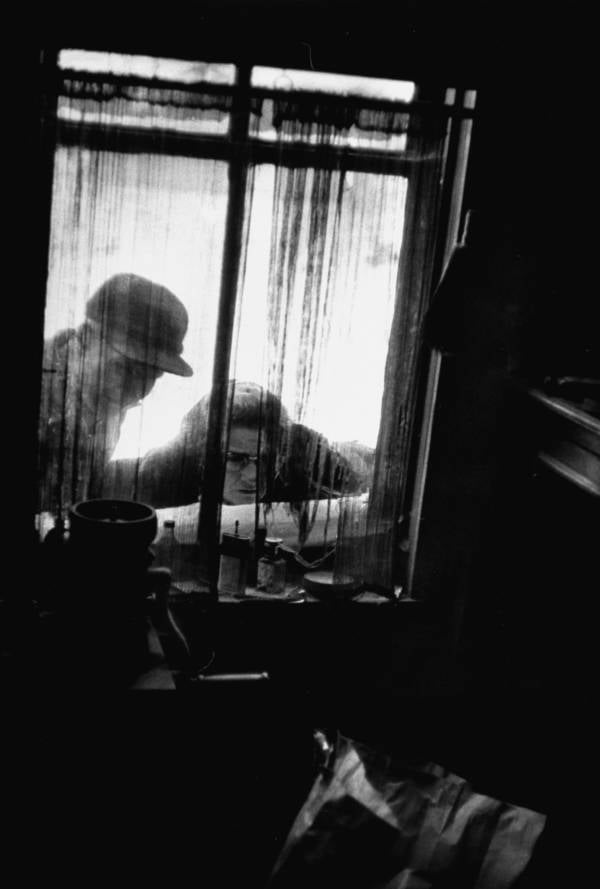 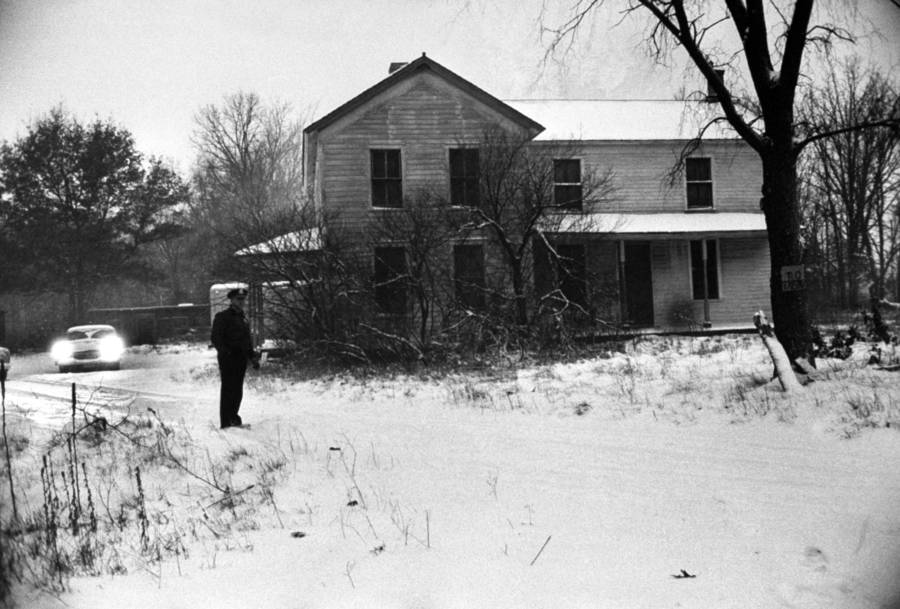 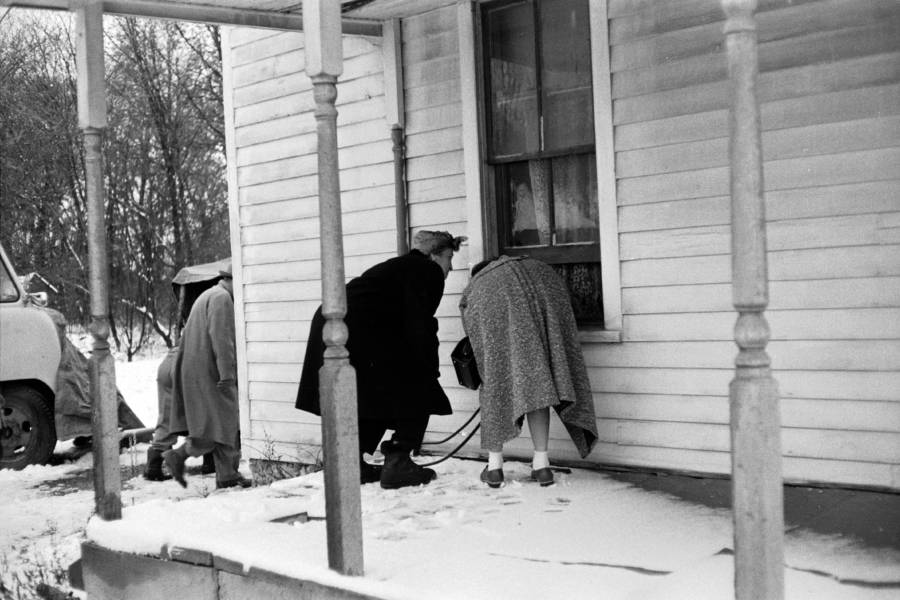 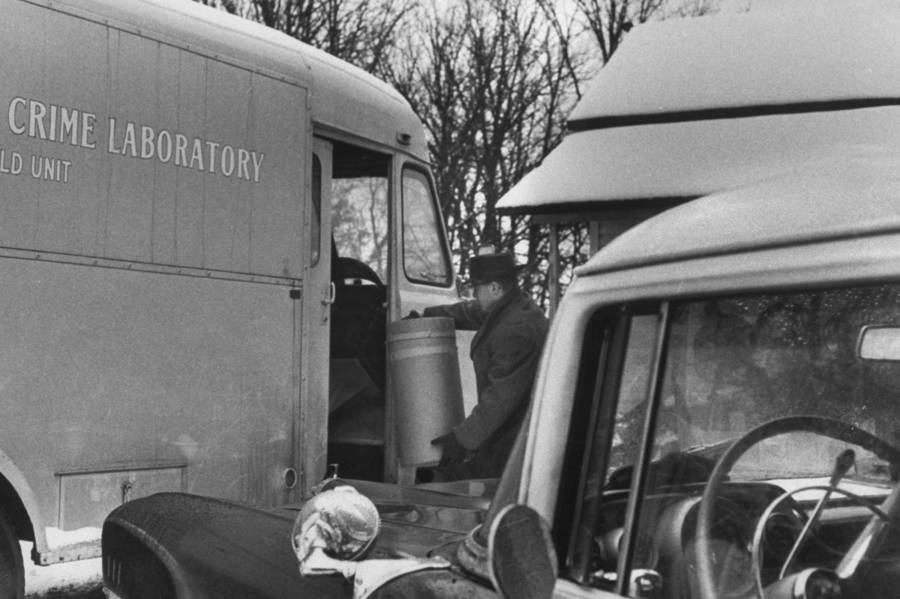 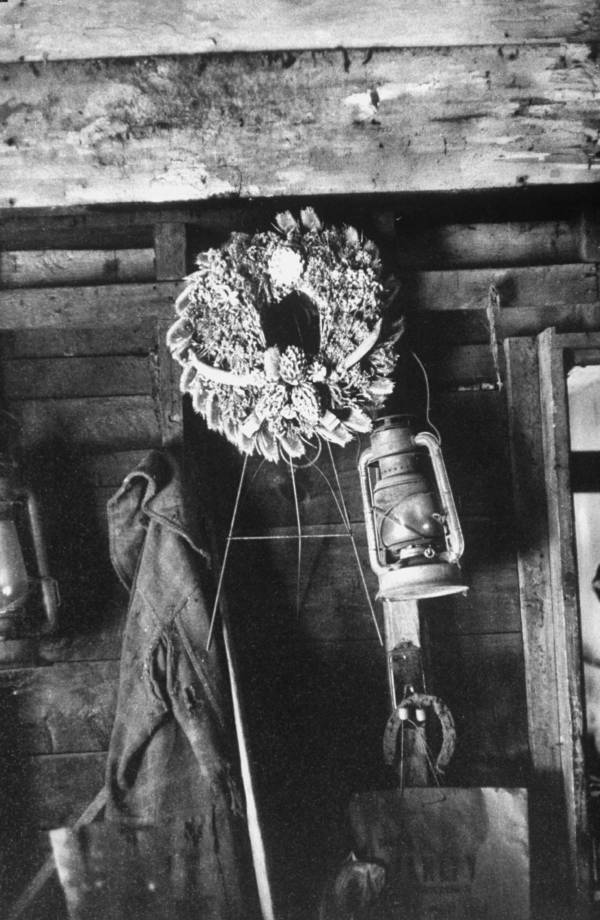 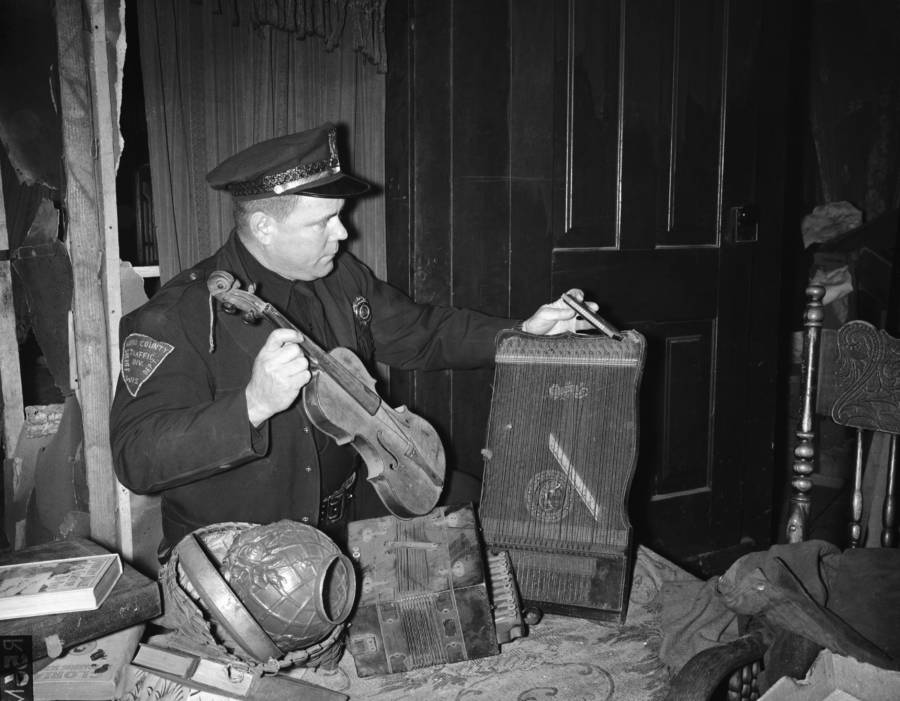 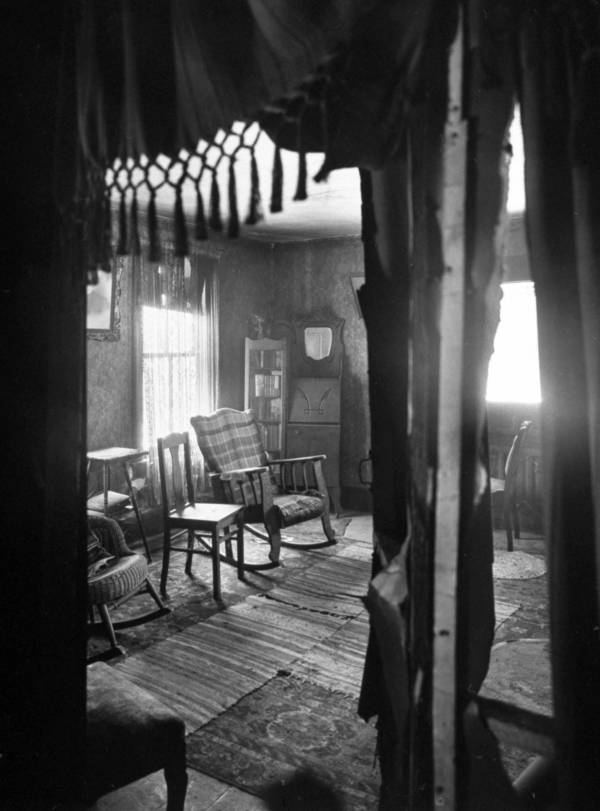 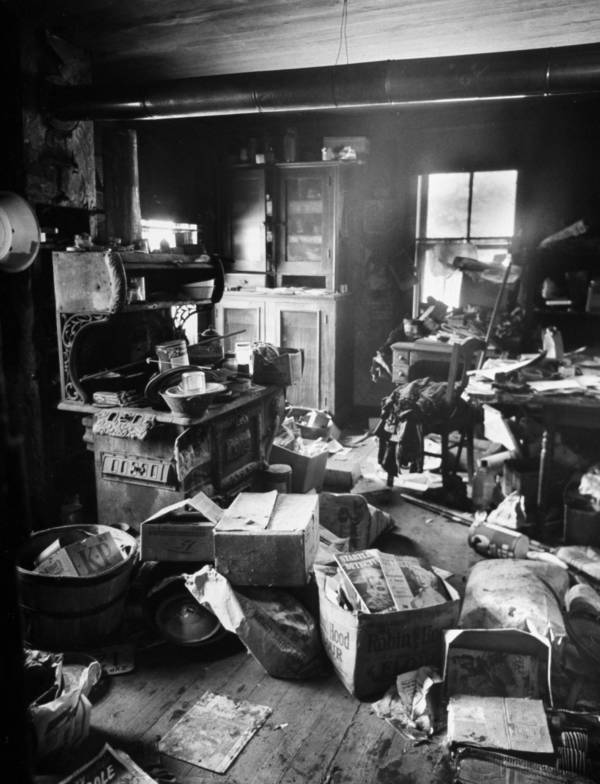 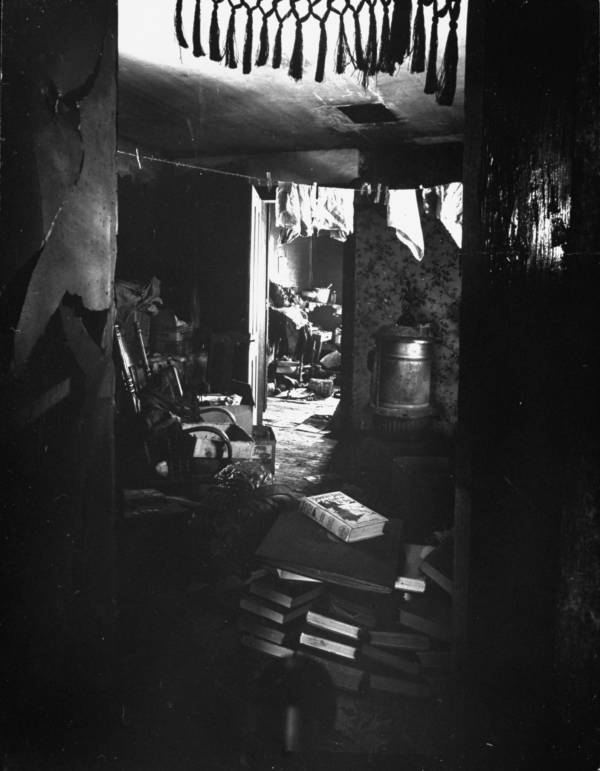 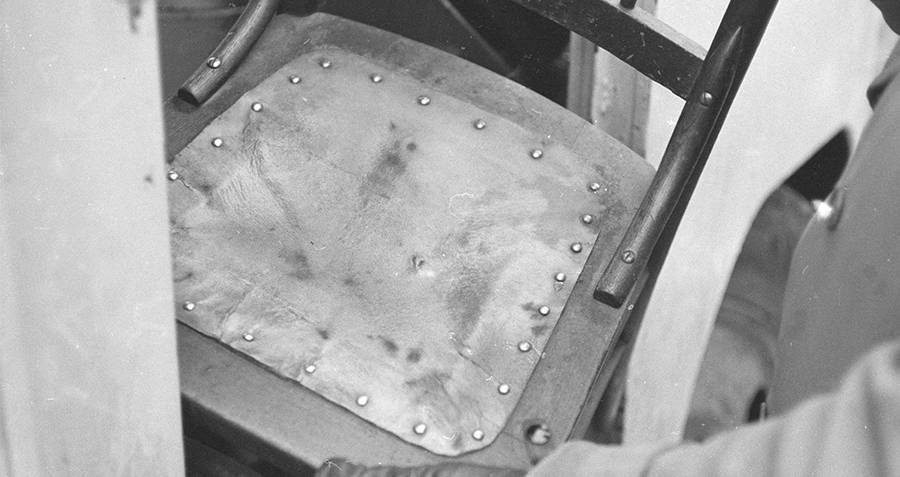 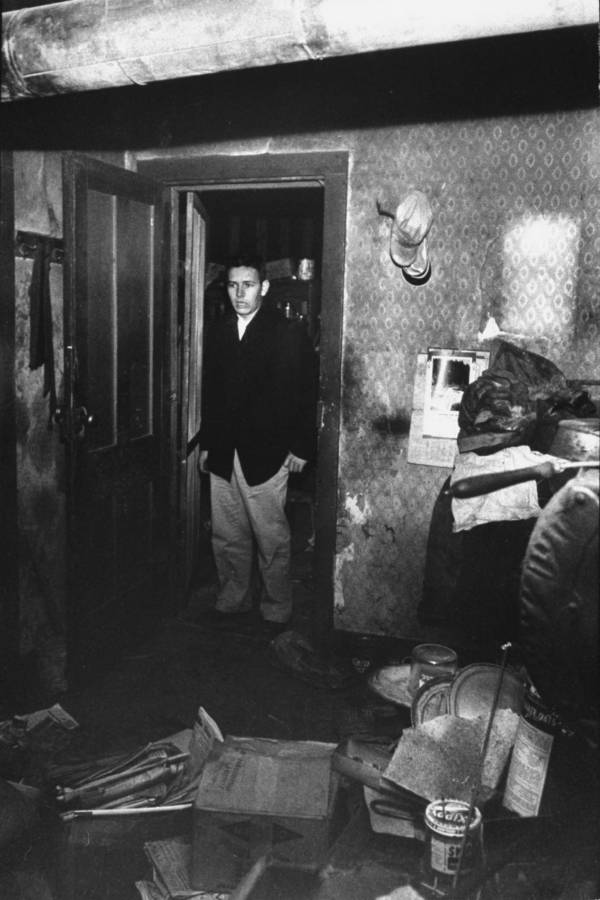 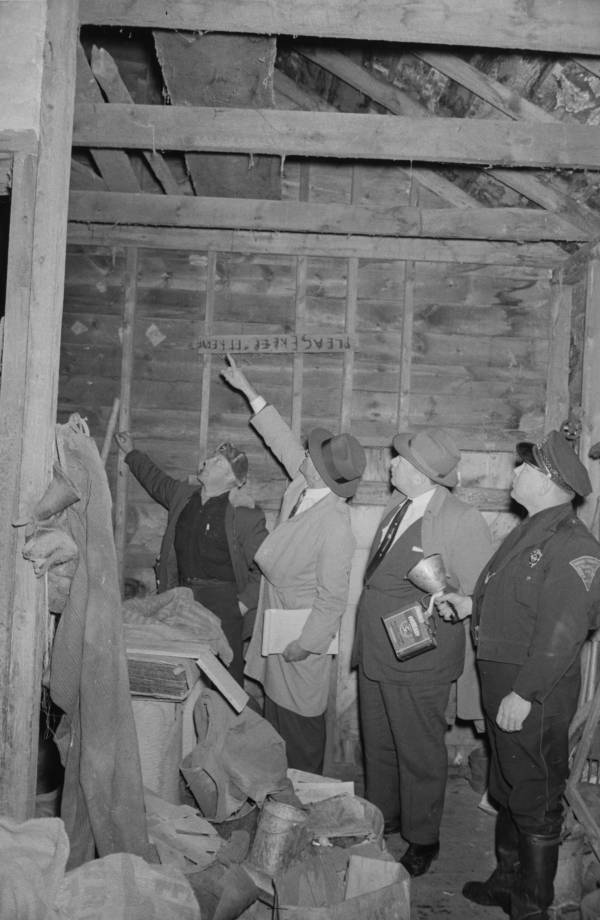 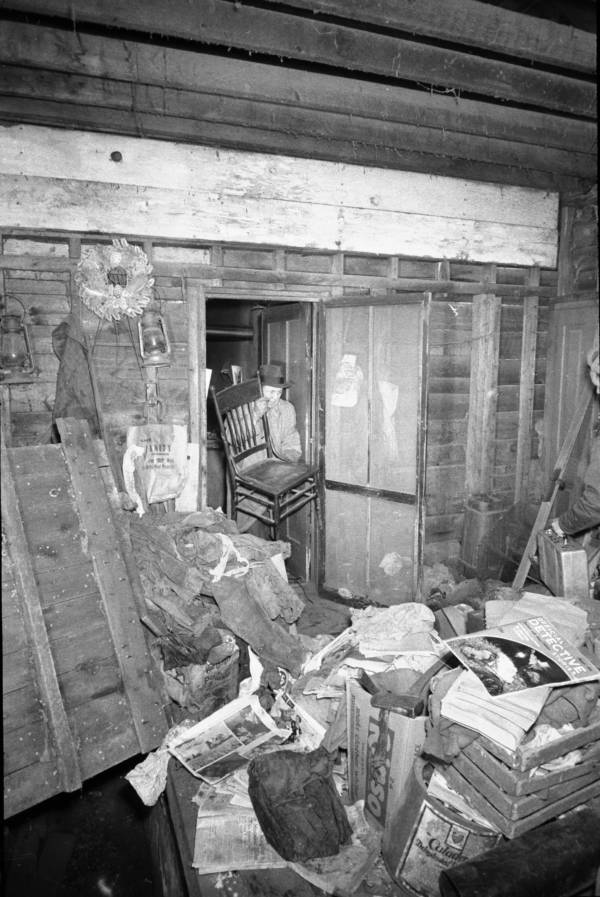 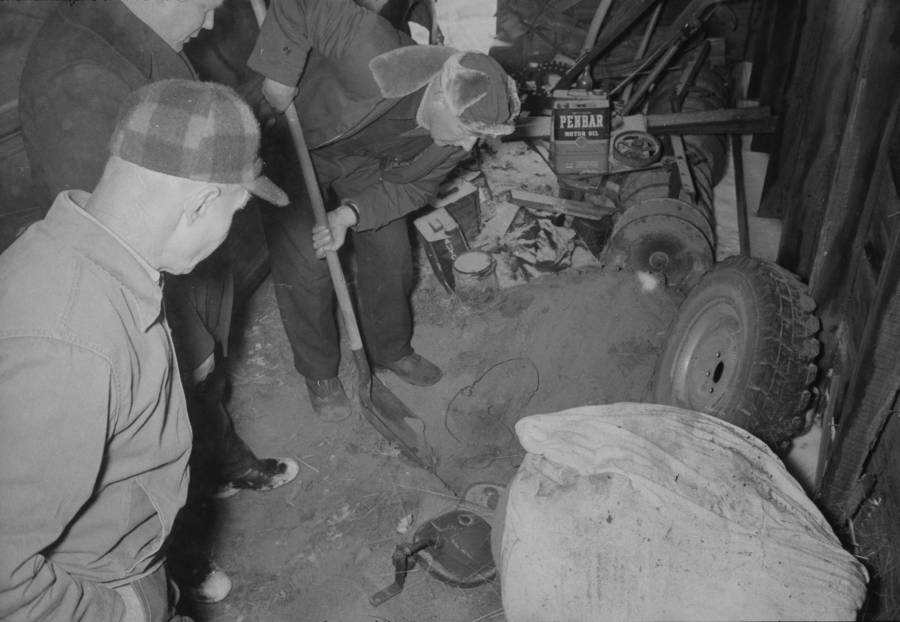 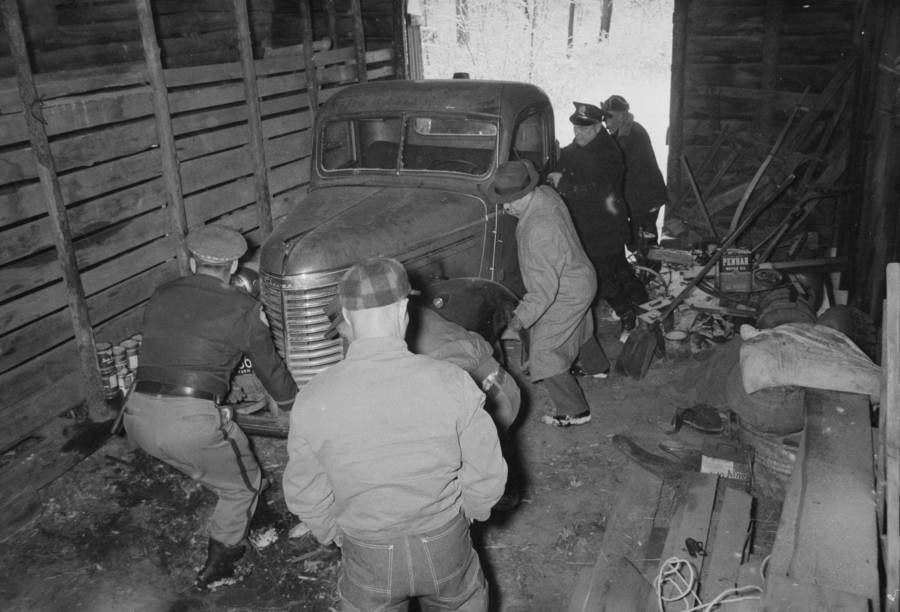 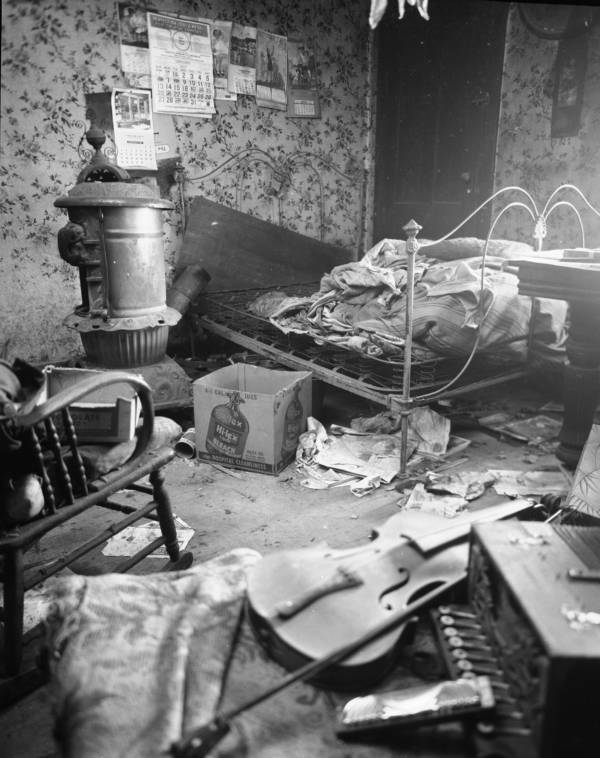 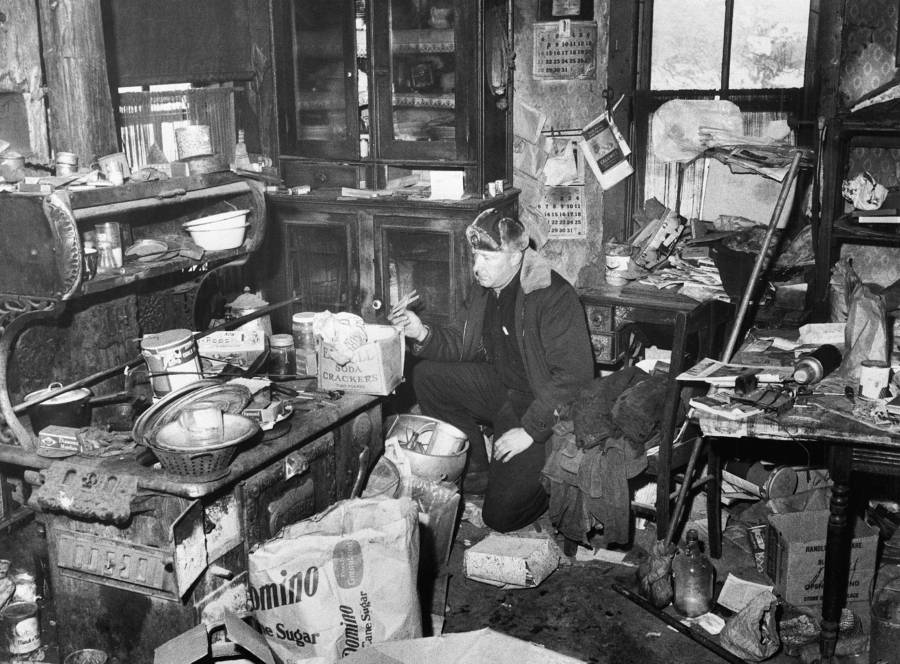 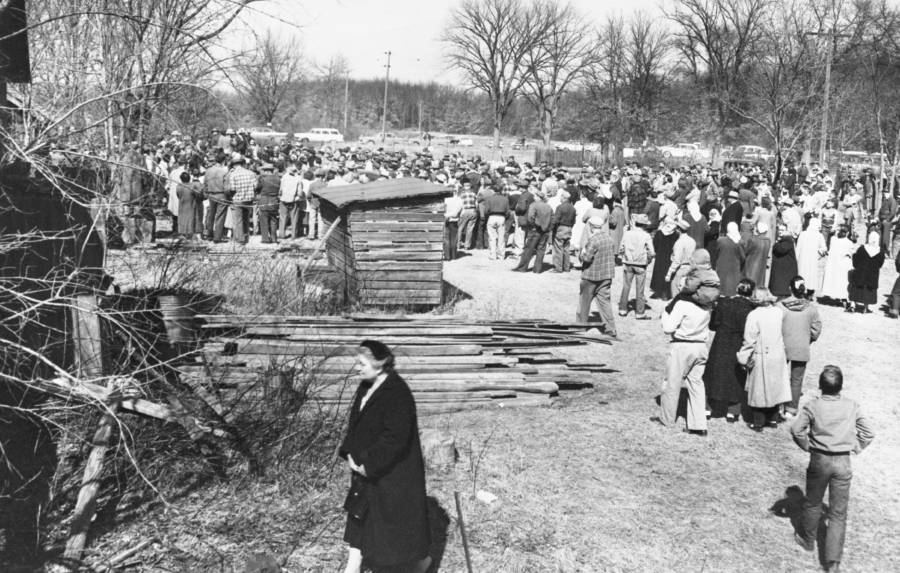 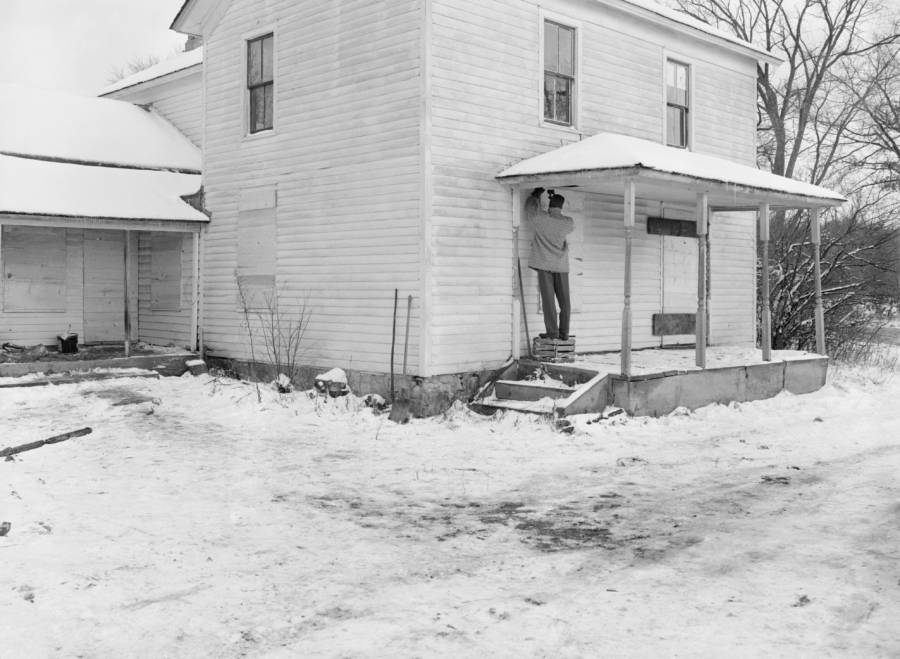 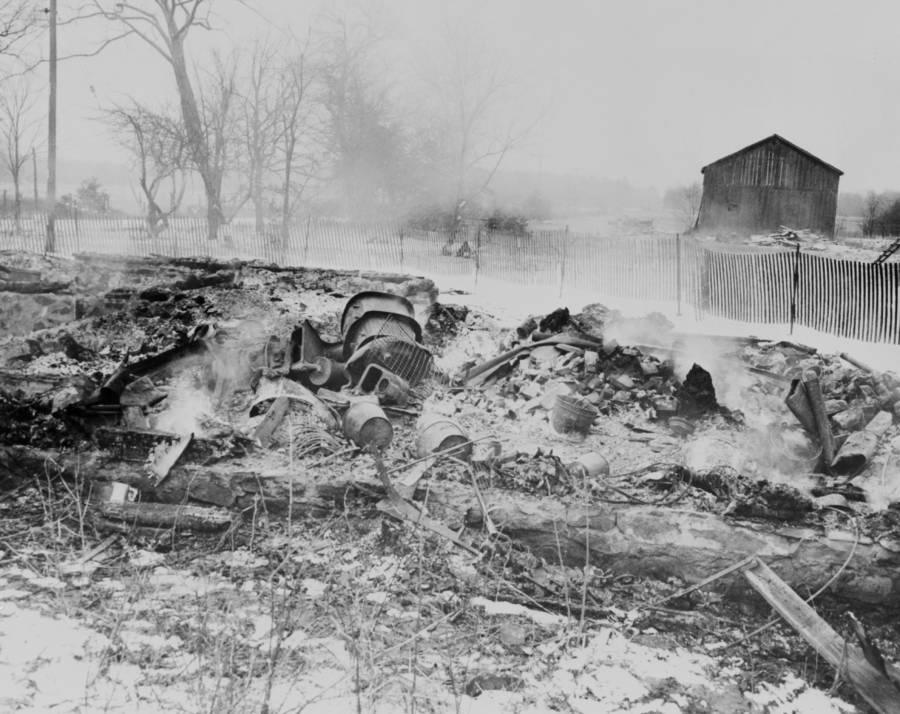 But before Gein's crimes inspired world-renowned novels, motion pictures, and embedded themselves in the collective psyche of a post-war nation seemingly enjoy a golden age, Gein was just another resident of Plainfield, Wisconsin.

Then, authorities had a peek inside Ed Gein's house of horrors — see the photos in the gallery above —— and realized just how disturbed this man truly was.

But what they found inside Ed Gein's house is only more unsettling after learning the full story. After all, most serial killers develop their gruesome interests at an early age with fetishes of an abusive, sexual, or masochistic nature.

In an attempt to understand Ed Gein, delving into his early years which were spent in an abusive household with an overbearingly religious mother is likely the best place to start.

Born Edward Theodore Gein on Aug. 27, 1906, in La Crosse, Wisconsin, his parents were by all accounts a mismatched pair for such a vulnerable young boy. His father, George, was an alcoholic which meant that the boy was largely watched over by his mother, Augusta. 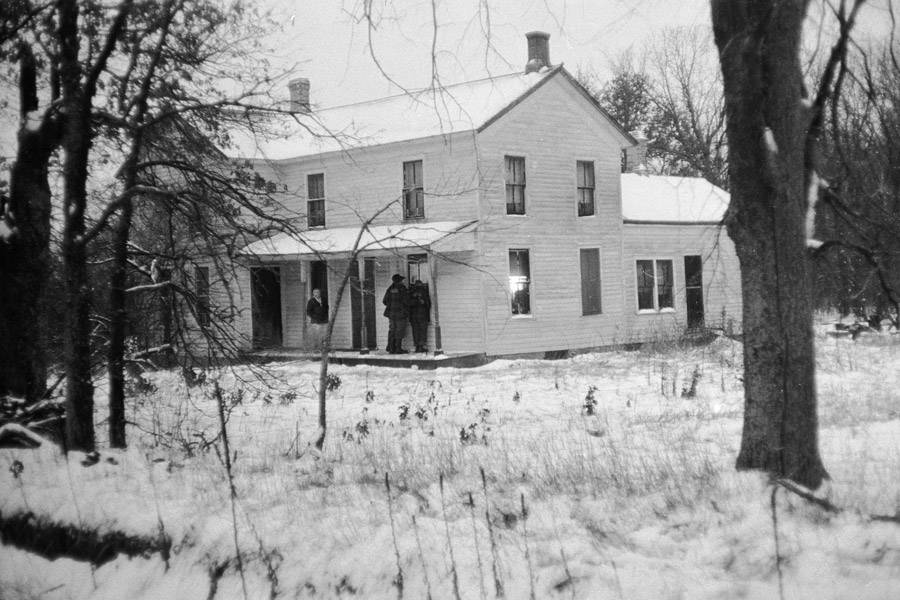 Frank Scherschel/The LIFE Picture Collection/Getty ImagesCuriosity-seekers peer through a window into the house of serial killer Ed Gein in Plainfield, Wisconsin. November 1957. The bright lighting in the side ground floor window is part of the illumination for the on-site crime lab.

Augusta, meanwhile, was a complete religious fanatic. Though Ed grew up alongside his older brother, Henry, no amount of sibling companionship could sway the tides of an overly puritanical matriarch who routinely mocked and shamed her children.

Augusta ruled the home with an iron fist ideologically founded on her stern, conservative outlook on life. She'd regularly preach about sin, carnal desire, and lust to the two young boys while their father nodded off in a booze-induced trance.

Augusta relocated the Gein family to Plainfield in 1915. Gein was only nine when they moved onto the desolate farmland and he rarely left for any reason besides school. This would be Ed Gein's house until for decades and the place where he would commit his ghastly crimes.

Though Gein had likely already been shaped and molded in terms of repressive behavior and unnatural rejection of normal urges, his mental health issues wouldn't truly take shape until both of his parents died. In 1940, when Ed was 34 years old and still lived at home, his father died.

When Gein Was Left Alone With Mother

Gein and his brother were attempting to pick up the slack left by their admittedly complacent father after he passed away. The two brothers worked a variety of odd jobs to make ends meet and support their mother lest her wrath be turned against them.

In 1944, however, a supposed accident shrank the Gein family even further. Gein and Henry were burning brush on the family farm and the blaze apparently grew to uncontrollable proportions, ultimately leaving Henry dead.

It was only after Gein's future crimes were discovered by the law and the world at large that true crime obsessives and amateur sleuths began wondering what really happened that day.

Regardless of how Henry's death happened, Gein now had his mother to himself. Ed Gein's house was now comprised of an aging, puritanical mother who shamed her adult son about the dangers of carnal desires and a grown man whose fears, anxieties, and devotions forced him to stay and endure this environment.

This aspect of Gein's disturbed persona was most notably explored in Alfred Hitchcock's Psycho.

Gein never left the house for social gatherings nor dated anyone. He was entirely devoted to his mother and tended to her every concern.

Only one year later, however, Augusta Gein died. This is when Ed Gein's legacy as one of the most psychologically unhinged, dangerous, and macabre serial killers of the 20th century began in earnest.

Living alone in the sizable house once inhabited by his parents and older brother, Ed Gein started to go off the rails. He kept his mother's room spotless and untouched, presumably in an effort to repress the fact that she'd died.

The rest of Ed Gein's house, meanwhile, was utterly neglected. Everywhere, trash piled up. Piles of household items, furniture, and nondescript items collected dust and grew from small piles to undeniable mounds. At the same time, Gein fostered a disconcerting curiosity for anatomy which he initially sated by amassing numerous books on the subject.

Coincidentally, this stage of Gein's psychological development and quality of life and environment occurred at the same time that several Plainfield residents went missing. Numerous people had simply vanished without a trace.

One of these was Mary Hogan, who owned the Pine Grove tavern — one of the only establishments Ed Gein regularly visited.

Bernice Worden was reported missing on Nov. 16, 1957. The Plainfield hardware store she worked in was empty. The cash register was gone and there was a trail of blood leading all the way out the back door.

The woman's son, Frank Worden, was a deputy sheriff and he was immediately suspicious of the reclusive Gein. He focused much of his initial investigation exclusively on Gein, who was quickly located and apprehended at a neighbor's house.

The killer's carnage and hitherto undetected bloodlust had finally come to a close when the authorities who were dispatched to Gein's home that night discovered the stark, undeniable evidence they likely never thought they'd encounter. 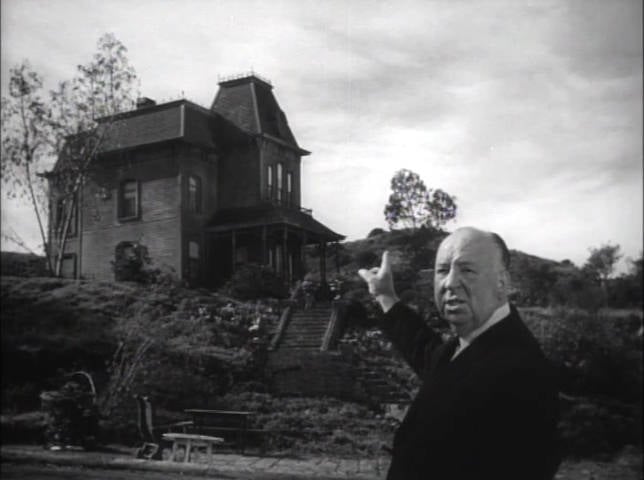 In addition to Worden's decapitated corpse — which had also been gutted like captured game and hung from the ceiling — officers searching Ed Gein's house found various organs in jars and skulls turned into makeshift soup bowls.

It didn't take too much prodding for Gein to confess. He admitted to killing Worden as well as Mary Hogan three years earlier during initial questioning. Gein also confessed to grave robbery from which he used several corpses for some of his most grotesque crimes.

Gein transported corpses back to the house so he could express his anatomical curiosity on the bodies. He'd cut off various body parts, have sex with the deceased, and even made masks and suits of their skin. Gein would wear them around the house. A belt made of human nipples, for instance, was among the evidence.

As the Plainfield police department had an interminable backlog of unsolved murders and disappearances on its plate, authorities tried their hardest to pin a few of these on Gein. In the end, they were unsuccessful, and it's uncertain whether Gein simply didn't want to admit to things he hadn't done or if he didn't want to give them the pleasure of aiding in their work.

Clearly convinced that the unprecedented crimes of Ed Gein could be viewed as the result of mental health issues, his lawyer William Belter entered a not guilty plea by reason of insanity. In January 1958, Gein was found unfit to stand trial and committed to Central State Hospital.

He had previously worked there for various odd jobs: mason, carpenter's assistant, and medical center aide.

In 1974, Gein submitted his first attempt for release. Due to the dangers he posed to others, this was naturally rejected. Fairly calm and laconic when he wasn't in a manic, murderous state, Gein kept a low profile and stayed to himself while institutionalized. 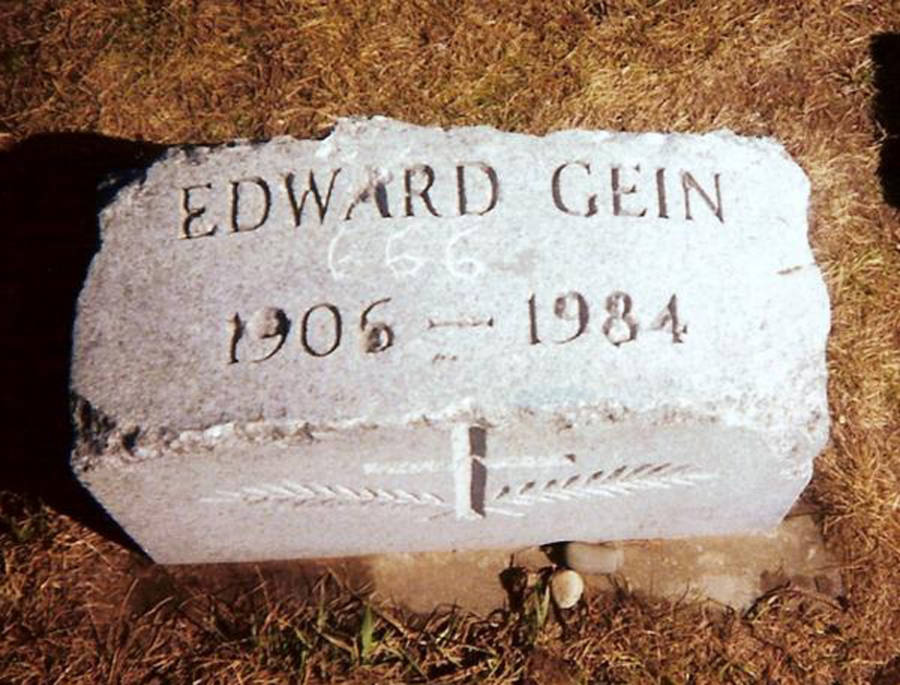 Wikimedia CommonsThe Butcher of Plainfield's grave marker was stolen in 2000 and became a featured item on a 2001 tour by the Angry White Males. Frontman Shane Bugbee claimed it was fake after Seattle police confiscated it. It's now kept in the basement of the Plainfield police department.

Only when his health had begun to seriously deteriorate toward the late 1970s did Gein leave Central State Hospital. He was transferred to the Mendota Mental Health Institute. It was here that he died of cancer and respiratory illnesses on July 26, 1984.

Gein's legacy is primarily one of unspeakably unprecedented sexual deviance and shockingly gruesome carnage. This was the first time normal American citizens were even confronted with the idea of turning a person's skin into a mask, necrophilia, or using human bones as part of various kitchen utensils.

The canon of American serial killers, true crime, and their overflow into countless artistic media arguably began with the discovery of the horrors inside Ed Gein's house.

From novels like American Psycho to music groups like Cannibal Corpse, and classic horror films such as Psycho and The Texas Chainsaw Massacre — Ed Gein's legacy was just as much about tangible disgust as it was an opportunity to cathartically explore how vile humanity can be from within the confines of safe, artistic expression.

After this look into Ed Gein's house of horrors, discover the most chilling quotes by serial killers. Then, make sure you check out the best serial killer documentaries that will chill you to the bone.