This Flying Ace Shot Down 26 Planes, Lived Through Two Plane Crashes, And Survived Being Adrift At Sea

His success as a pilot was just one of his many skills. Eddie Rickenbacker survived against all odds multiple times, founded one of America's biggest airlines, and was even asked to run for president.

Sometimes, successful people rise from the ashes of tragedy. Eddie Rickenbacker was one such person. Rickenbacker lived a fascinating life highlighted by great feats of courage, dedication, and multiple brushes with death.

After becoming America’s most successful World War I flying ace, he went on to create his own automobile company, survive two plane crashes and 24 days at sea, led one of America’s major airlines, and even traveled to the Soviet Union to gather intelligence during the Second World War. 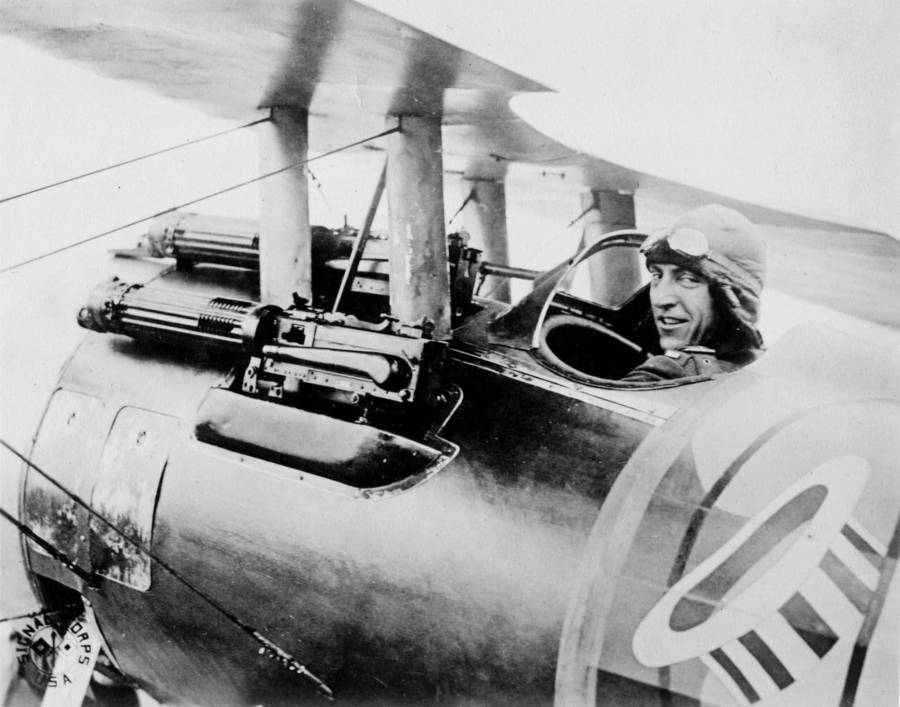 U.S. Air Force Capt. Eddie Rickenbacker in the cockpit of a biplane.

Yet, his life began with great obstacles that would have stopped most people. How did he achieve so much success?

Edward Rickenbacker was born on October 8, 1890, to Swiss immigrants in Columbus, Ohio. He was the third-oldest of seven children in the Rickenbacker household.

The family lived in poverty for most of Eddie’s younger years. Then, in 1904, when Eddie was 13 years old, his father William Rickenbacker suddenly died in a construction accident.

Eddie was forced to drop out of school to become the breadwinner of the family. This seemed like a terrible way to start out in life, but Rickenbacker was determined.

Fascinated with cars, then a relatively new technology, Eddie Rickenbacker worked as a mechanic for a race car driver and later as a car salesman.

His love of cars led him into racing and in 1911 he came in at 13th place in the inaugural race of the now-famous Indianapolis 500.

He soon established himself as a fearless young driver with multiple accidents and close calls. In 1914 in Daytona, Florida, young Eddie entered a race and set a then-world record of an impressive 134 miles per hour. 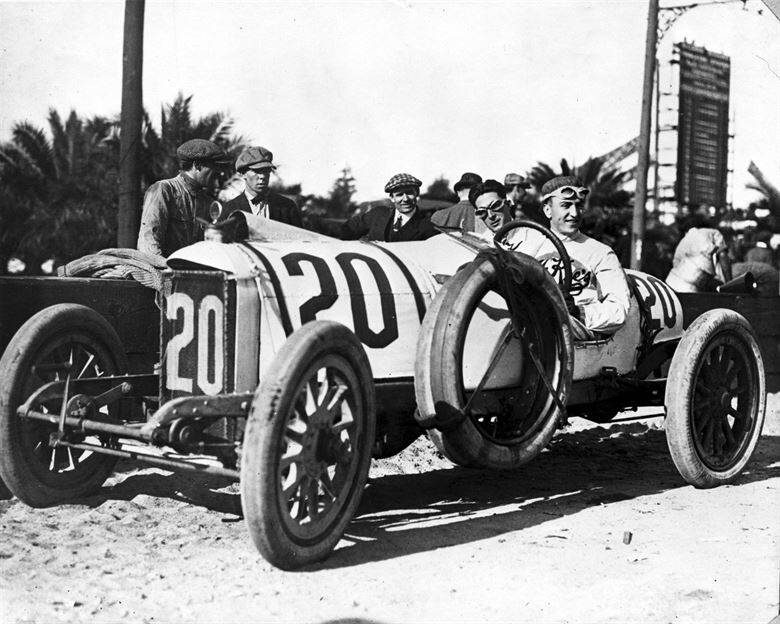 By the time of World War I, he was one of American’s top race car drivers.

Then, in 1916, Rickenbacker had a chance meeting with aviation pioneer Glenn Martin. Martin flew Rickenbacker in an airplane, and he was hooked.

Fighting In World War I

After America officially entered World War I in 1917, Eddie Rickenbacker immediately joined the army as a mechanic and automobile driver for Gen. John J. Pershing. However, he quickly switched his sights to the fledgling U.S. Army Air Service.

After just 5 1/2 hours of flying with an instructor, Rickenbacker flew solo. Despite his lack of a college degree, Rickenbacker finished his flight training in just 17 days.

His experience as a race car driver was crucial to his success. He earned a commission as a lieutenant and joined the 94th Aero Squadron in France.

As Rickenbacker later recalled, he was determined to fly in the war, no matter what:

“I learned pretty fast. Long practice in driving a racing car at 100 miles per hour gives first-class training in control and in judging distances at high speed, and helps tremendously in getting motor sense, which is rather the feel of rather than the sound of it,” he said. “This is a part of the physical equipment of handling an airplane, and it makes a lot of difference.”

The training was hard. His squadmates looked down on Rickenbacker as a simpleton because they were all Ivy League graduates. Yet the determined young man would not let anyone or anything stop him. 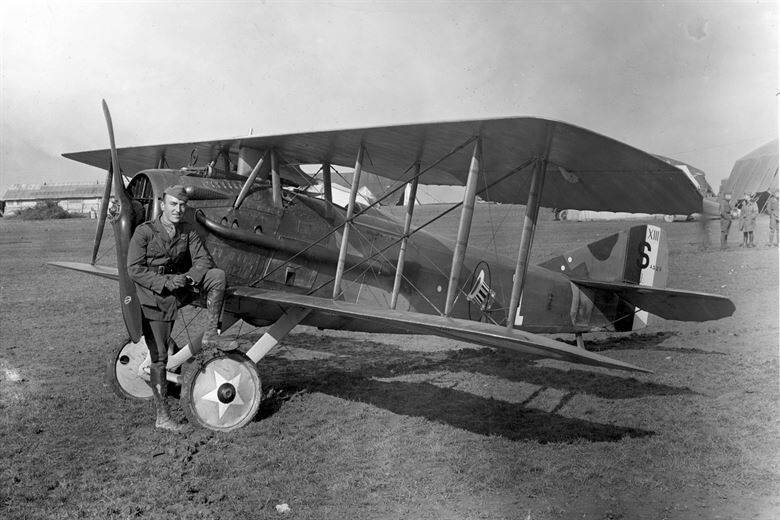 U.S. Air ForceEddie Rickenbacker poses with his aircraft during the First World War.

During training, Eddie Rickenbacker perfected maneuvers and flying techniques that allowed him to get as close to the enemy as possible before firing at them. Now, it was time to show his abilities in the field.

On April 29, 1918, Eddie Rickenbacker shot down his first enemy aircraft.

By the end of May, he scored five individual victories to earn him the official title of “ace,” as well as the French Croix de Guerre. After his sixth score on May 30, an ear infection grounded the pilot until July 31.

The last half of September 1918 was Eddie Rickenbacker’s busiest time in the air. On September 14 and 15, he shot down two of Germany’s newest airplanes, a pair of imposing Fokker D.VII’s, all on his own.

By the end of September, he earned a promotion to captain and was made the commanding officer of the squadron. The very next day, Rickenbacker went on to achieve a feat that would eventually earn him the highest honor of the U.S. military: the coveted Medal of Honor.

Taking to the skies near Billy, France, Capt. Rickenbacker went on a voluntary patrol.

Soon enough, he came upon a squadron of seven German planes, including five of the new Fokkers. Given the odds, a more sensible man would likely avoid confrontation, but Rickenbacker was sure of his abilities.

He dived on the enemy, shooting down one Fokker and one of the escorting Halberstadt fighters. For the gallantry of overcoming 7-to-1 odds, Rickenbacker became a legend.

Eddie Rickenbacker’s secret was simple: “The experienced fighting pilot does not take unnecessary risk. His business is to shoot down enemy planes, not get shot down.”

Rickenbacker learned that the best way to take down enemy planes was to sneak up on them. Once he determined their position, he came down from above with the sun behind him.

Enemy planes didn’t see his fighter until it was too late. By the time they could react, the dive-bombing pilot was out of sight and ready for another attack run.

His skills were not without risks. He returned from one mission with a fuselage filled with bullet holes and half of a propeller. On another mission, a bullet grazed his helmet.

But, all of that didn’t matter. Rickenbacker truly loved flying — he just wanted to be up in the air.

Whereas many other fighter pilots grew tired of their jobs and left the service, Rickenbacker had no such thoughts:

“The sky means something to me it never meant before. When I look up and see the sun shining on the patch of white clouds up in the blue, I begin to think how it would feel to be up somewhere above it, winging swiftly through the clear air, watching the earth below and the men on it no bigger than ants.”

In all, Eddie Rickenbacker flew 134 combat missions. He shot down 22 planes and four observation balloons for a total of 26 kills. 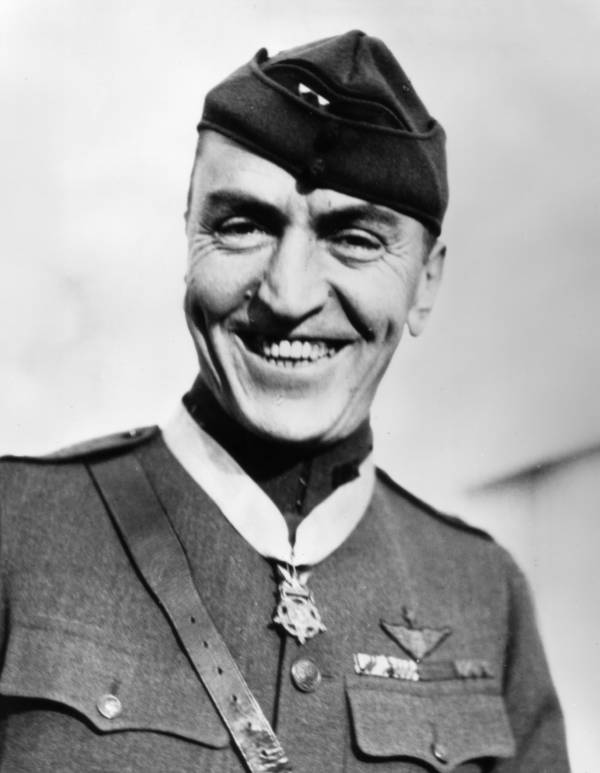 U.S. Air Force A formal photo of Captain Eddie Rickenbacker wearing his Congressional Medal of Honor, awarded to him in 1930.

Eastern Air Lines And Another Brush With Death

Eddie Rickenbacker retired from the military after World War I. Although he was promoted to major, he chose to keep the title of captain. In his own words, “I felt that my rank of captain was earned and deserved.”

Consequently, he was referred to as “Captain Rickenbacker” or “Captain Eddie” by the public.

This may have been a good time to settle down and make use of his considerable fame as a flying ace. However, Rickenbacker was not that kind of person.

Instead, he went into the car manufacturing and later air transportation business, eventually becoming president of Eastern Air Lines, which he grew into one of America’s biggest, most profitable airlines.

Then, on February 26, 1941, Rickenbacker again brushed shoulders with death when the Eastern Air Lines plane he was traveling on crashed into a hillside.

Although both pilots and 11 passengers perished, Rickenbacker somehow managed to survive the crash, adding to the popular belief that he was blessed with good fortune.

Despite heavy injuries, including a shattered pelvis, broken ribs and leg, and a torn eyelid, Rickenbacker spent the next nine hours reassuring and guiding the survivors.

After being rescued, he reportedly hovered between life and death for some 10 days but ultimately survived, later crediting his willpower as the decisive factor.

He spent the next year recovering, although the crash left him with a limp for the rest of his life. 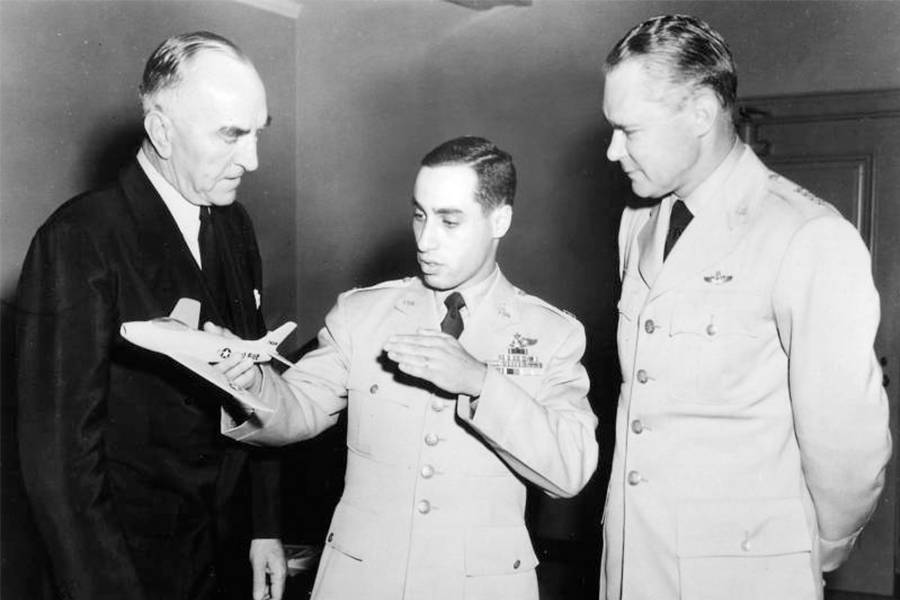 Surviving Being Adrift At Sea

Despite his ordeal, Rickenbacker was determined to continue living his active, often-dangerous life. He raised support for Britain during the Second World War, toured military bases in England and the United States, and even used his airline to support the war effort.

Then, in October 1942, as Rickenbacker was on the way to New Guinea to inspect the American troops and deliver a secret message to General Douglas MacArthur, his B-17 plane went down in the ocean.

Although all eight men survived the crash, they were now stranded in the middle of the ocean in rubber rafts.

Despite being the only civilian, Rickenbacker immediately took charge of the situation. He allegedly taunted the men to encourage them to stay alive and helped divide the rainwater and fish that served as their only source of sustenance.

Supposedly, when a seagull landed on his head, Eddie Rickenbacker killed it with his bare hands and divided the carcass among the men.

Thanks to Rickenbacker’s indomitable will and a little bit of his patented luck, all but one man survived for 24 days at sea until they were finally spotted by an American airplane.

They credited the seemingly unbreakable 52-year-old man for their survival.

Rickenbacker’s amazing story once again brought him public attention, and a photo of him after the rescue, some 60 pounds lighter, was famously pictured in the Boston Globe newspaper with the caption “The Great Indestructible.” 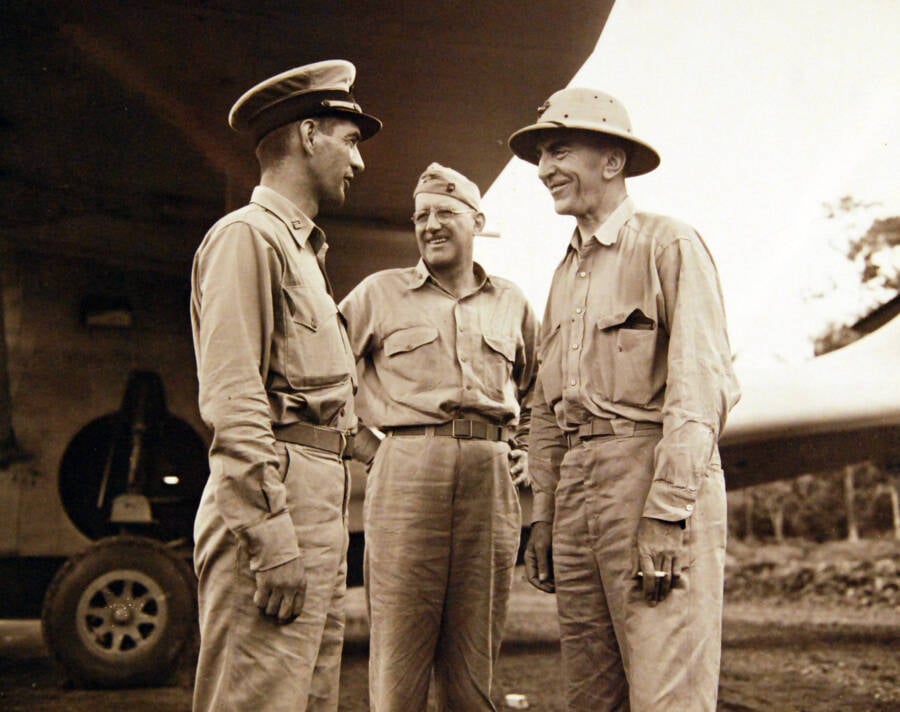 Captain Eddie Rickenbacker talks with Lieutenant W.F. Eadie, the man who rescued him after 24 days at sea in 1942.

Eddie Rickenbacker’s Trip To The Soviet Union And Later Life

Not long after his rescue, Rickenbacker continued his touring mission to promote the war effort. Then, in 1943, he went on a 55,000-mile trip to Russia, inspecting how the ally was using American equipment and offering his military advice.

He returned to the U.S. with vital military intelligence. By this point, “Captain Eddie” was so popular that many people wanted him to run in the 1944 presidential election against Franklin Roosevelt: a man he had strongly disagreed with on several occasions.

But just as he did before, Eddie Rickenbacker chose to stay out of the spotlight. He continued to run the Eastern Air Lines company, traveled the United States with his wife, and went on speaking tours touting conservative American values.

After a long, adventurous, and exciting 82 years of life, Eddie Rickenbacker passed away in 1973 in Switzerland.

After learning about Eddie Rickenbacker, read about Richard Bong, who downed 40 planes during World War II along with more of history’s most famous war heroes.