4 Of The Most Elaborate Pranks Ever Pulled Off

Looking for April Fools inspiration? These elaborate pranks are just for you. 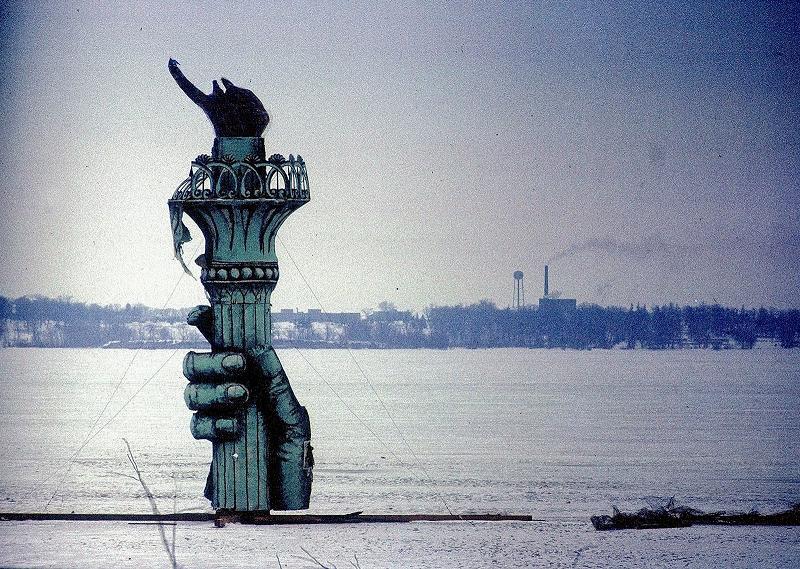 Any idiot can soap windows or have a dozen pizzas delivered as a prank, but it takes a special kind of idiot to ruin the Rose Bowl. Fortunately, the world is full of that sort of person, and there seem to be more every day. Many are called to massively inconvenience large numbers of people, but only a few have the patience, focus, and near-total lack of regard for others to pull of a truly epic prank. Here are four of the true standouts. 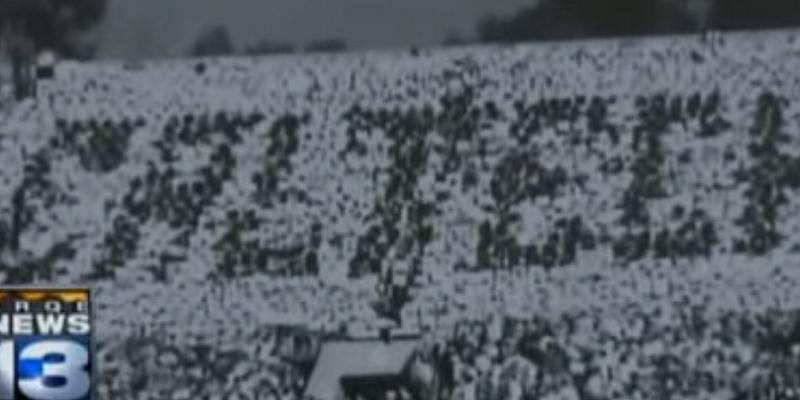 Caltech, like many prestigious technical colleges, specializes in producing elite engineers and terrible athletes. In the 113 years (and counting) that the Rose Bowl has been played, the Caltech Beavers have never gotten close to competing in it. By 1961, after 59 consecutive years of early-round elimination, some Caltech students decided to even things up. 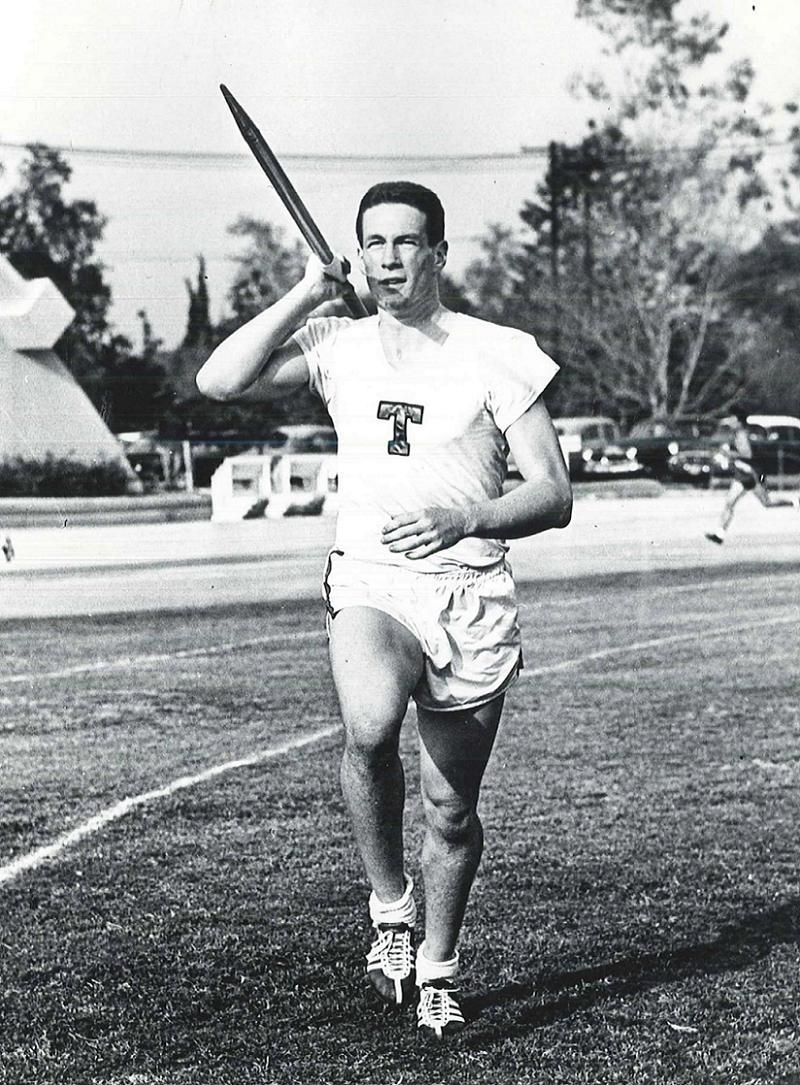 And then some, if possible. Source: Caltech

Instead of doing what modern people do when they’re working off a grudge—call in a phony bomb threat—Caltech made its presence felt in a somewhat more passive-aggressive way. In the days before Jumbotron, spectators were restricted to showing enthusiasm North Korean style: whole sections of fans holding colored cards that could be flipped to spell out messages. At halftime, the Washington Huskies cheering section was set to do just that.

Using thousands of spectators to spell out messages with nothing but cards is tricky work. For starters, you need thousands of people to sit in exactly the spot you’ve assigned them, which is a bit of a trick in the Rose Bowl, as everybody is sitting on concrete bleachers. Second, you need everybody to flip their cards at exactly the right moment, or your message will have holes in it. 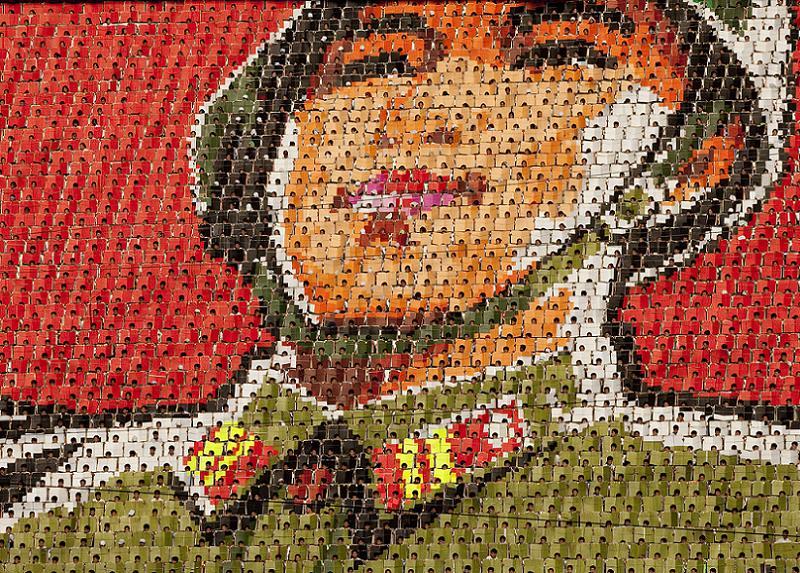 Or else. Source: Yellow Korner

A Caltech student stole the Huskies’ master plan a few days before the game while the Washington Huskies were visiting Disneyland. If this had been just any prank, it would have ended there, but this was Caltech—and six decades of pent-up nerd rage—so a substitute plan was left for the team to pick up as if nothing had happened.

At the game, everything went perfectly. During halftime, the crowd spelled out the first 11 pro-Huskies messages just as intended, then things went sideways. Message number 12 was a graphic which showed not a dog—the Huskies’ mascot—but a beaver. After that, the crowd spelled “SEIKSUH,” and then “CALTECH.” Given that the game was televised nationally, this actually may have gotten more publicity than a bomb threat. 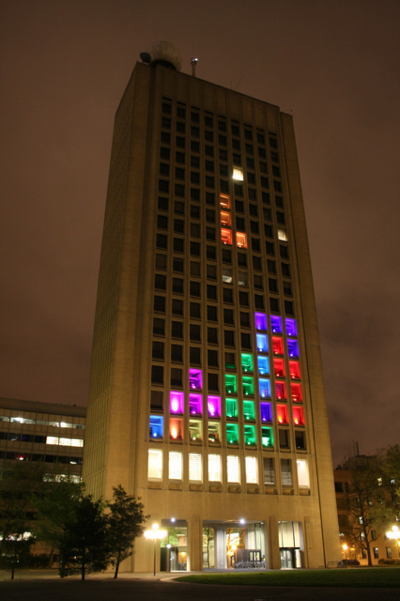 The best pranks are Rube Goldberg affairs that take years of planning and an absurd amount of work, preferably distributed across dozens (or more) of people. So it was when anonymous hackers rigged MIT’s Building 54 for a giant game of Tetris. 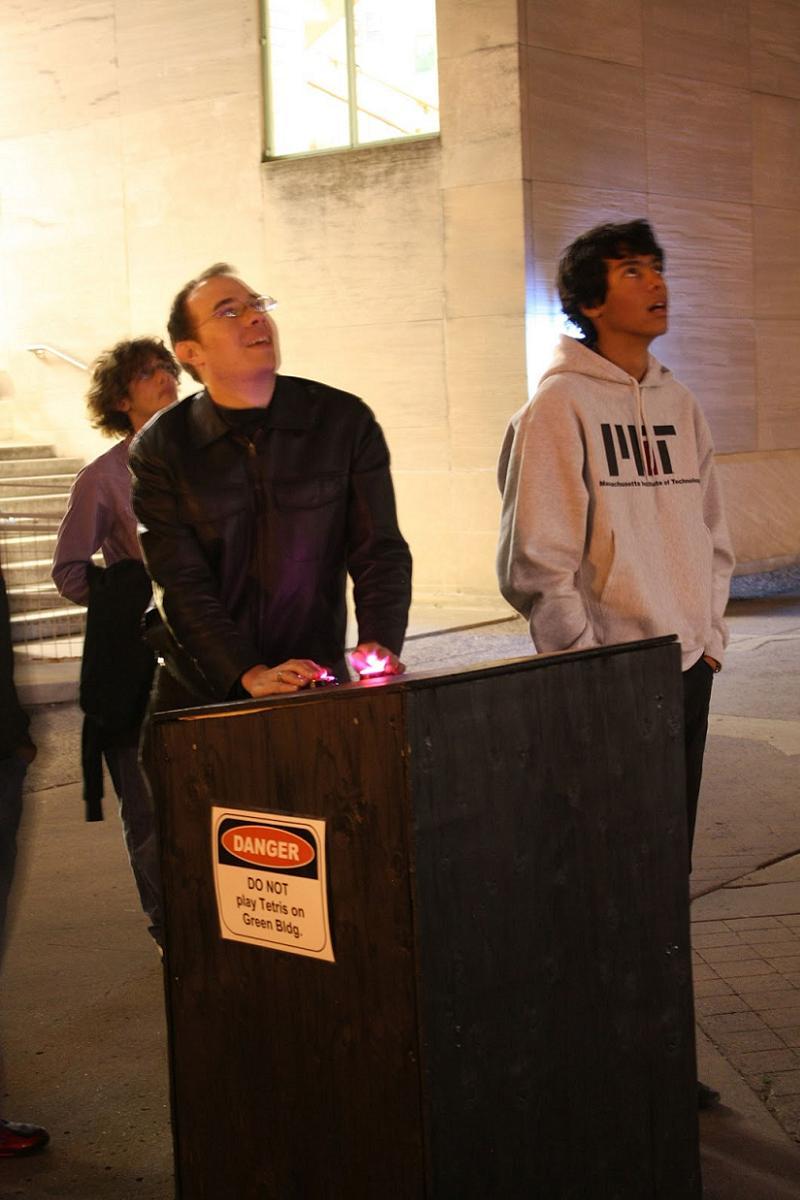 Building 54 is a huge slab of concrete with uniform square windows arrayed in a 9×17 grid. Naturally this got people thinking about Tetris as early as 1988, but nobody was able to pull it off until April 2012.

The hackers, who are said to number in the dozens and cut across several class years, spent four years assembling the necessary parts and programming the wireless switches to make the game work. Each window in the building had to be equipped with a colored LED panel, which drew 3 watts and was thermally linked to the window, inside a machined aluminum casing, which students made themselves. Each light panel was hooked to a wireless receiver and connected through a Wi-Fi signal to the control board down below.

Passersby were able to play the game as long as they wished, and the game was visible across the river for miles. Like the small-screen Tetris, this game had a difficulty curve that saw the blocks falling faster and faster, as well as growing fainter and harder to see, until the inevitable defeat sent everything crashing down.

The display is still up, with no plans to remove it, so look for Caltech students to hijack the thing sometime soon.

University of Wisconsin’s Homage to Planet of the Apes 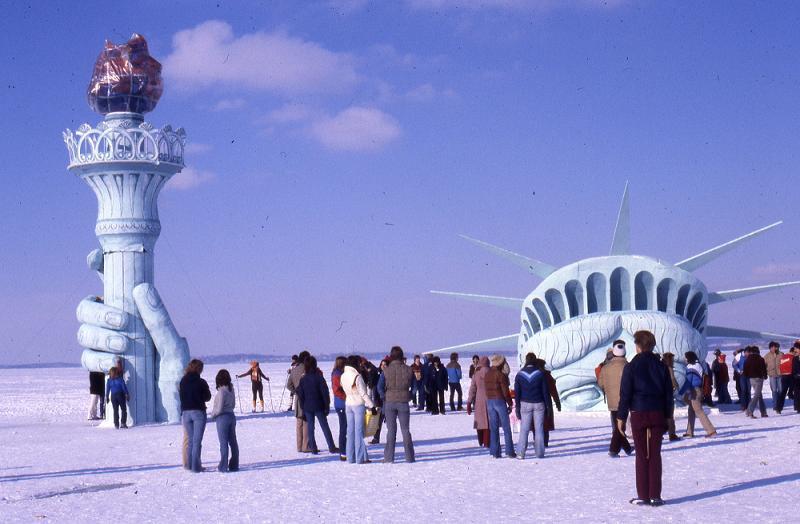 Usually the public hears about a prank’s effects, not its perpetrators. It is, after all, the prank which should get the most attention. This, however, was not the case for the 1979 Statue of Liberty prank at the University of Wisconsin. Here, the details, while borderline spectacular, are really secondary to the personalities involved.

Two students ran for student council on a platform of changing the school’s name from the University of Wisconsin to the University of New Jersey to look better on alumni resumes, and relocating the Statue of Liberty to Lake Mendota. After winning reelection with the slogan, “Are you stupid enough to vote for us again?” the need was felt to follow through on at least one promise.

One day, deep in the Wisconsin winter, students were surprised to see the Statue of Liberty’s crown and torch poking through the ice covering the lake. When asked, the student leaders explained that the statue had been delivered the night before, but the crane broke and now it was partially submerged in the lake. 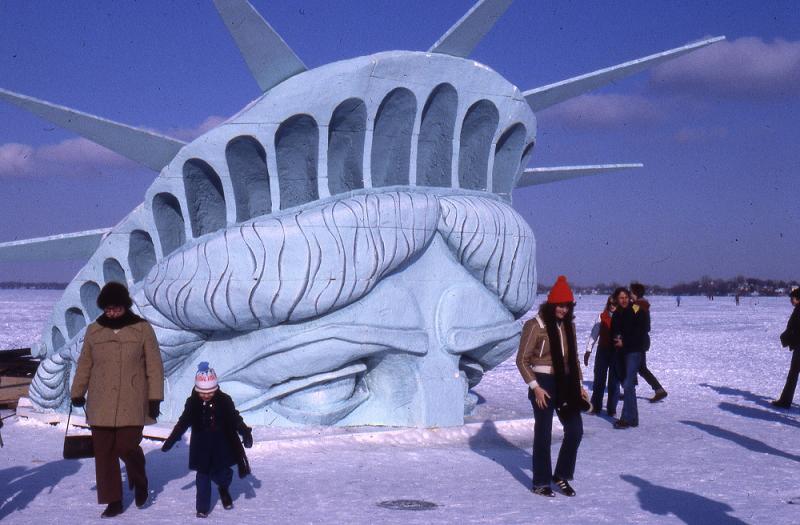 The “Statue of Liberty” was, of course, a fake. The crown and torch were full-scale mock-ups made from wood and canvas which were, from a distance, convincing enough for people all over Madison, who flocked out to see it.

The prank was the brainchild of Jim Mallon and Leon Varjian, who also concocted the absurdist platform of the Pail and Shovel party, which had vaulted them to power over the student government’s $70,000 budget—which the Pail and Shovelers promised to convert into pennies and let other students dig into, hence the name.

Varjian already had a reputation for surrealist politics. In 1975, he ran for mayor in Bloomington Illinois, on a platform of carpeting the sidewalks and arming police with pop guns. One-way streets were to alternate direction daily, but the city’s main street would see its speed limit raised from 40 mph to a more reasonable 70.

The other leader of the party, Jim Mallon, eventually grew up and got a real job. 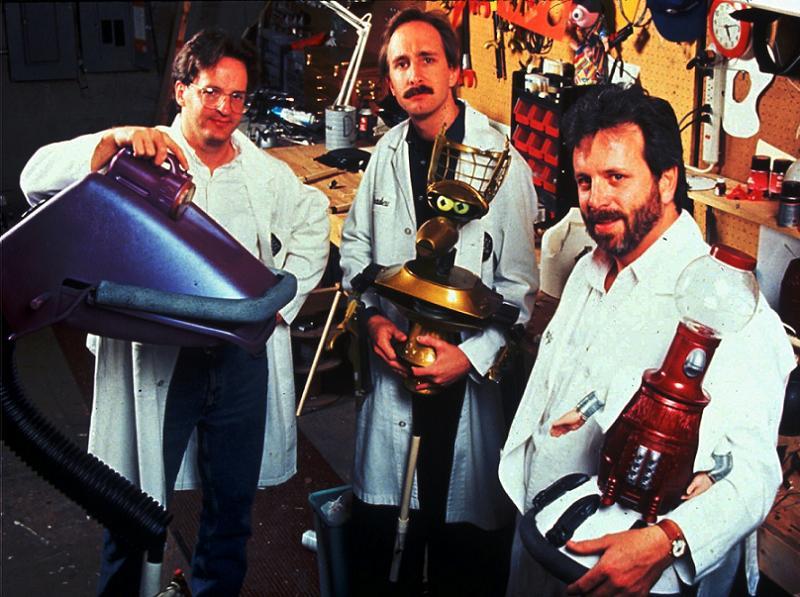 That’s him on the left. Source: Time 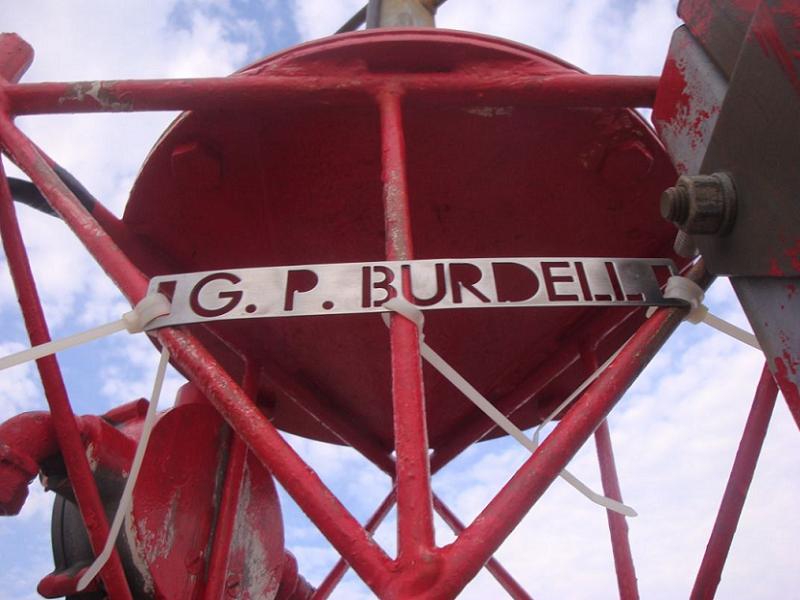 Much of what separates a truly epic prank from the norm is the extent to which people are willing to take it. The shampoo prank, for example:

only gets funny after about 15 seconds when the kid can’t wash the shampoo out of his hair. By 30 seconds he knows something is wrong, but he doesn’t know what. After a solid minute, when his friends are nagging him to finish up and get out, he’s practically crying, and it’s hilarious. But what if a prank could be dragged on for nearly a century, involve tens of thousands of people, and escape its original context to start popping up all over the culture like a roving guerrilla war?

In 1927, Georgia Tech admissions staff accidentally sent high school senior Ed Smith two enrollment forms. Rather than throwing one away, Ed filled out both forms; one for him and another for a fictitious person named George P. Burdell, whose name was an amalgam of Smith’s principal’s name and the name of a family friend. When both students were accepted, Ed kept the gag going by enrolling Burdell in the same classes he was taking. Then he did all the assigned work twice, once for himself and once for George, making the odd mistake along the way to avoid embarrassing questions being asked.

Smith kept this up for four years, after which both he and Burdell were awarded bachelor’s degrees in ceramic engineering. The first rule of improv comedy is “yes, and . . .,” meaning that the joke can never stop, which is probably how Burdell got enrolled in the same postgraduate program Smith was attending. 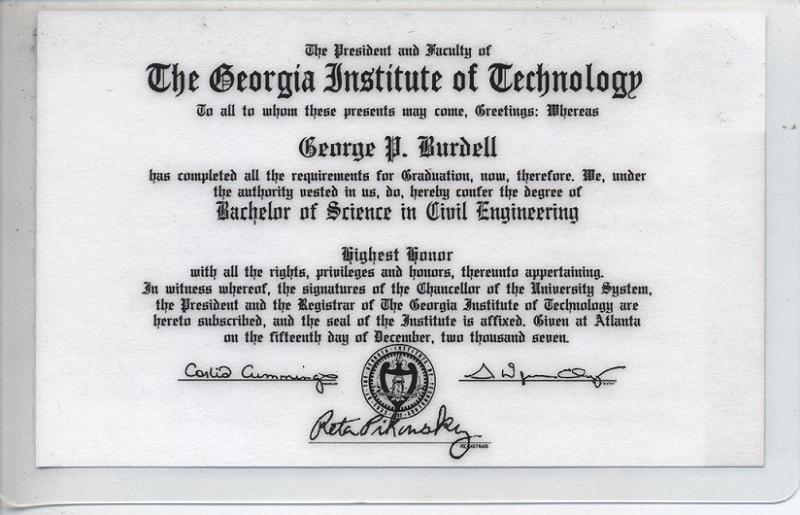 By the early ’30s, other Georgia Tech students had gotten in on the act, and had a truckload of furniture delivered COD to a frat house under Burdell’s name. Burdell continued to be listed as an active student and eventually earned every degree the school offered. He sat on the Alumni committee. He joined the ANAK Society, which is Georgia Tech’s version of Skull-and-Bones.

Everybody has to grow up sooner or later, and George P. Burdell was no exception. That’s why, in 1942, George enlisted in the US Army Air Force and was deployed to Europe with a B-17 crew. In those days, bomber crews were deployed for 25 missions, which was calculated to give everyone a 50-percent chance of coming back alive. Poor George only made it halfway; around his 12th mission, a senior member of the bomber wing—a Georgia Tech graduate—happened to glance at the personnel roll and brought the joke to an end. 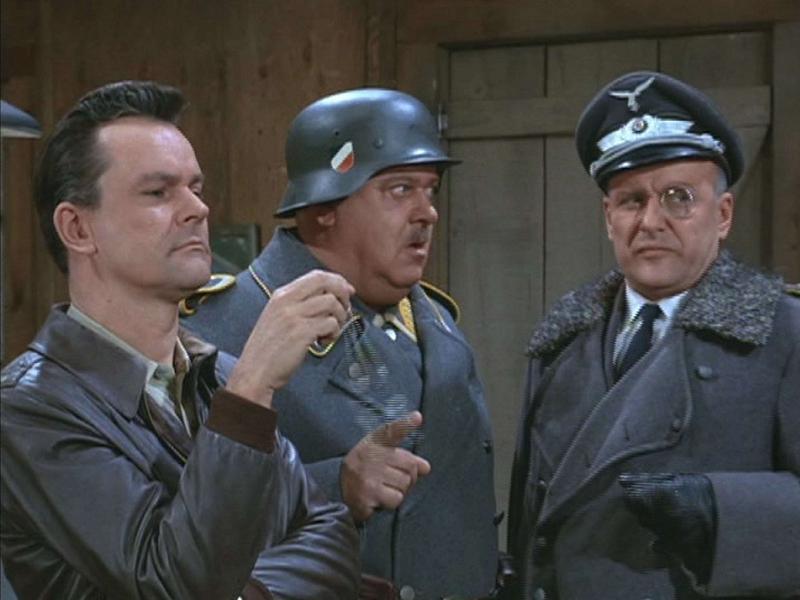 An Air Force officer with no sense of humor? Hogan! ! ! ! Source: Gallery Hip

That little setback wasn’t nearly enough to stop George. In the years after World War II, Burdell made appearances in A Prairie Home Companion, the editorial board of MAD Magazine, and the credits of South Park. Burdell’s story inspired an episode of MASH (the one where Hawkeye makes a lot of jokes and everybody is having sex), and his wedding—to another fictitious person named Ramona Cartwright was announced at Agnes Scott college in 1958.

Today, the 110-year-old George P. Burdell is still active in Georgia Tech student life. He features in the freshman orientation program, owns a store at the student union, and is probably working as the Title IX coordinator or something.

And that is how far a joke can be taken.