Don’t Have The Budget For International Travel? Check Out These Hidden Wonders Of The United States

The Earth is filled with natural wonders, carved and sculpted by nature’s passage of time. Mountains and rivers chiseled by ancient glaciers dot the global landscape, along with waterfalls, caves and marshes. Surprisingly, many of these impressive features can be found in America, across its expansive 3.8 million square miles.

Wild locations like Yellowstone and the Grand Canyon are well known for their beauty and landscape, but a plethora of just-as-beautiful others are hidden throughout the nation. These secreted gems offer visitors a unique opportunity to not only see natural America, but also to take a trip off the beaten path. 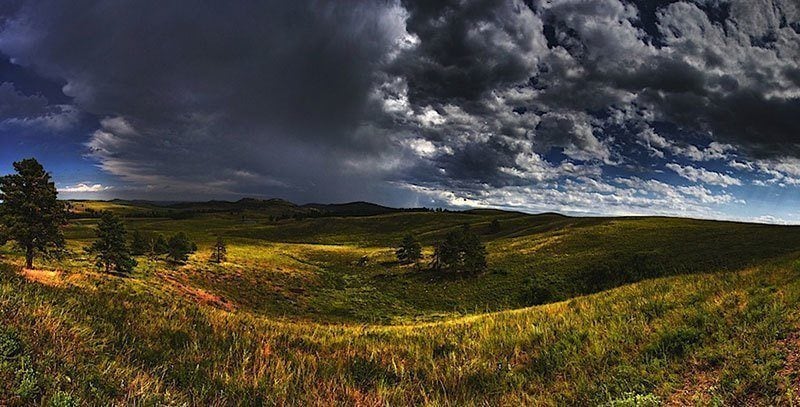 Native Americans have inhabited the Black Hills of South Dakota since at least 7000 BC. The hills were the site of gold mining and as you might guess, numerous battles between the government and Native Americans. Today, they are an annual gathering place for over 550,000 bikers. Source: Matador Network 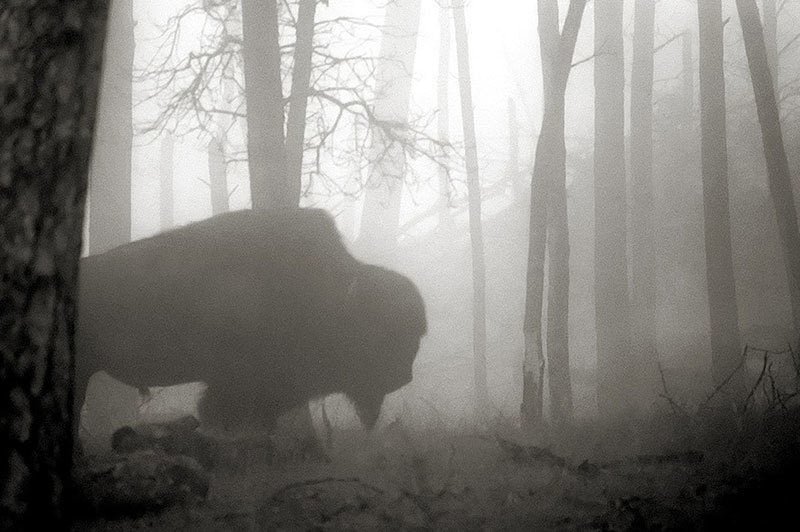 The Black Hills landscape is incredibly complex as well, featuring craggy rocks, grasslands and wet valleys. The environment is home to a wide array of animals, including buffalo, mountain lions and Bighorn Sheep. Source: Matador Network 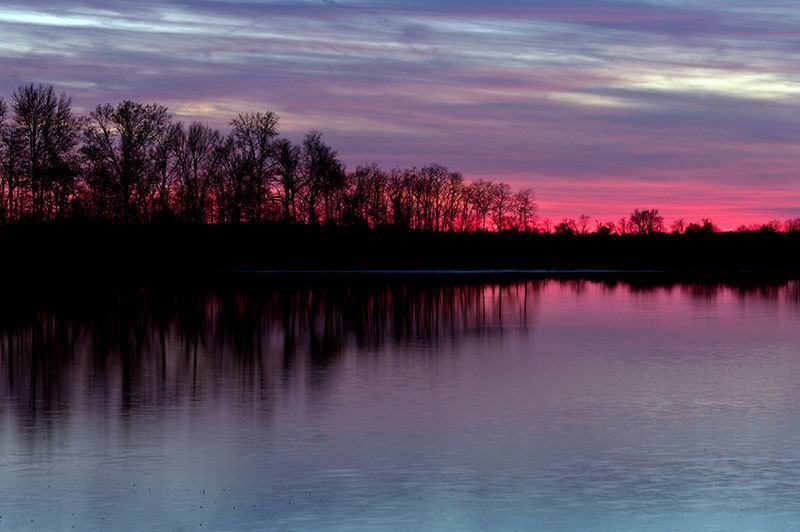 Migratory birds have a friend in Delaware at the Bombay Hook National Wildlife Refuge. Established in 1937, the 15,978-acre tidal marsh is one of the largest and most pristine expanses in the Mid-Atlantic region. Source: Stephen L Tabone Nature Photography 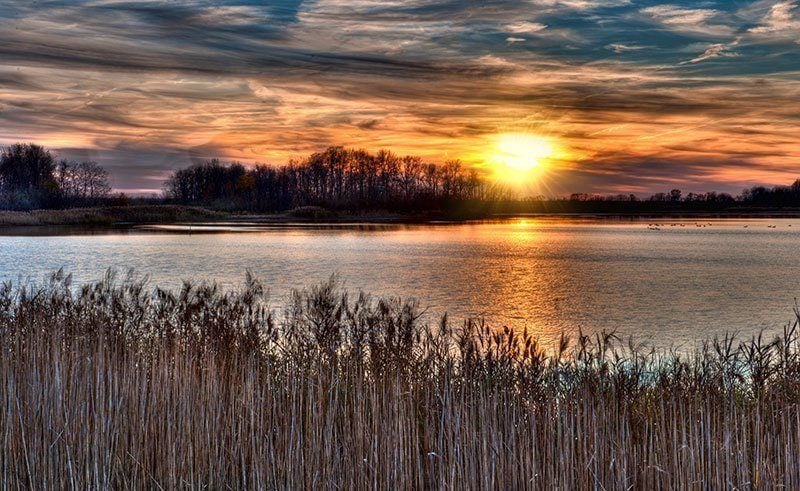 As high-quality habitats along the Atlantic Flyaway disappear, Bombay Hook has become increasingly important as a stop for migratory birds that travel north to their breeding grounds. Source: Stephen L Tabone Nature Photography 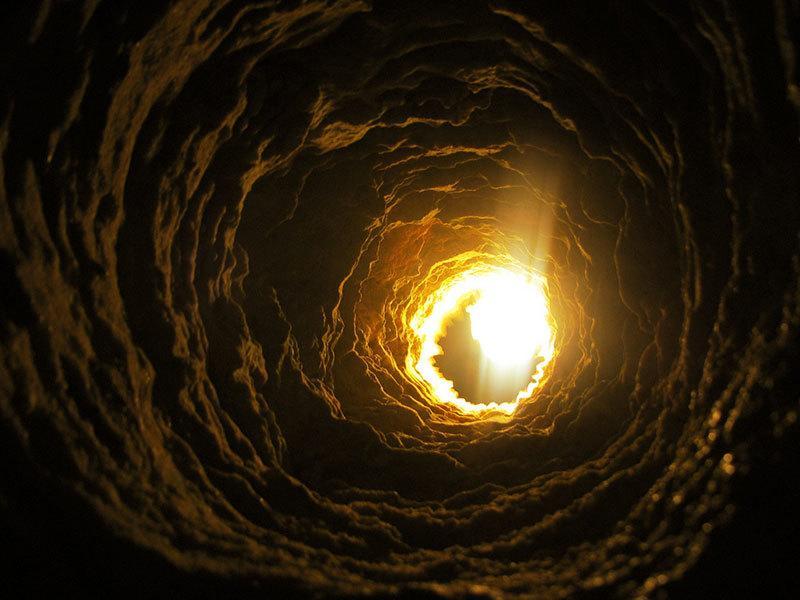 Tucked in the Guadalupe Mountains of New Mexico is Carlsbad Caverns National Park, where caverns are king. The park contains 119 limestone caves that were carved out by sulfuric acid. Source: Matador Network 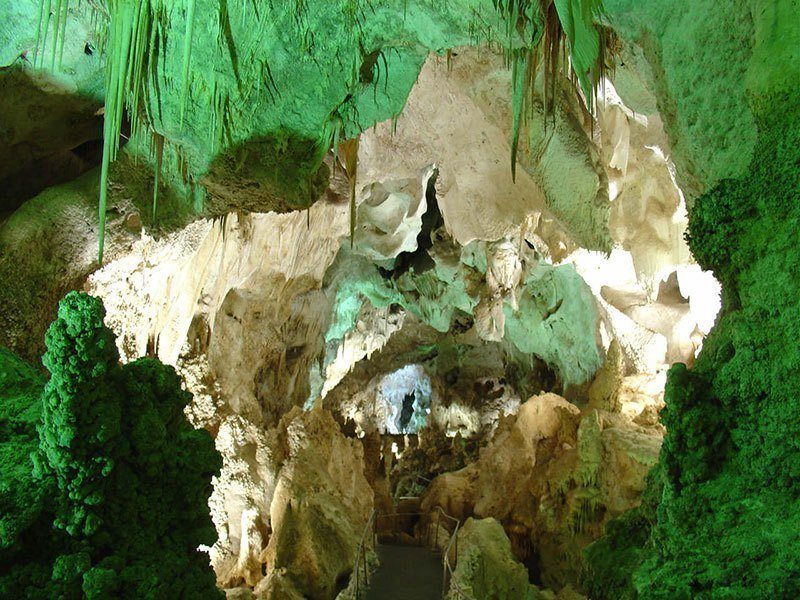 The caverns were once a part of a primordial sea that existed 250 million years ago. Bones from ice age animals like giant sloths, lions and camels have been found around the entrances to the caves. Source: Weird World Facts 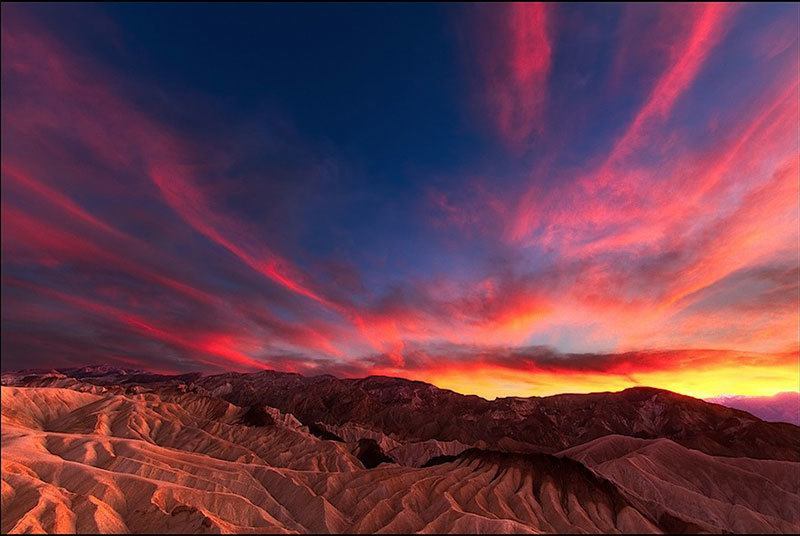 Though Death Valley is the driest and hottest area in North America, it actually sits over one of the world’s largest aquifers. The valley's oldest rocks are over 1.7 billion years old. Source: Matador Network 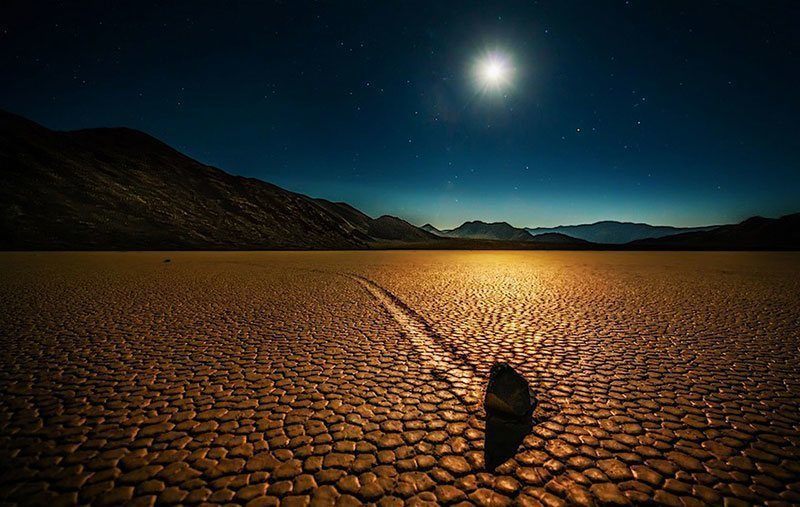 Death Valley is also known for Racetrack Playa, where rocks seem to move without any intervention from humans or animals. Scientists recently discovered that the rocks don’t use magic to move, but rather slide across thin sheets of ice that are pushed by wind whipping through the valley. Source: Matador Network

Hiking trails take you back through time on rugged and steep pathways, but at least you’re not running from a Tyrannosaurus Rex. Source: Dinosaur Valley State Park 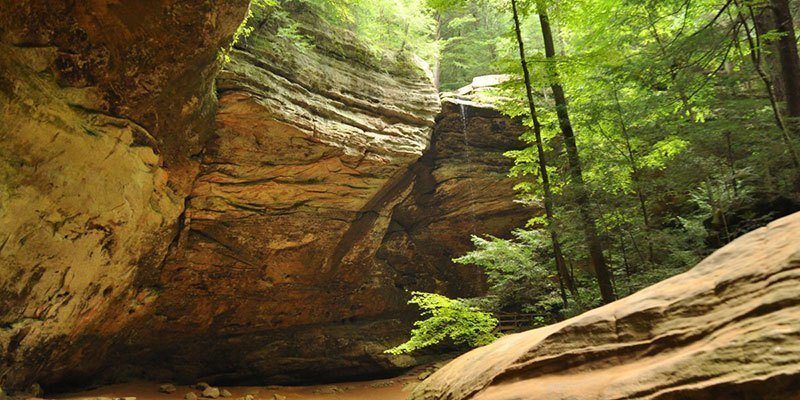 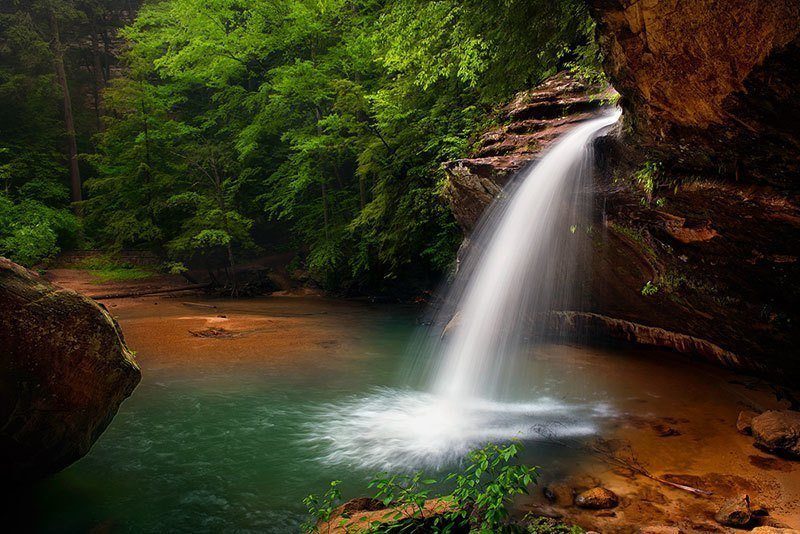 Formed by glacial torrents, the park’s rock formations also include deep gorges, a rock shelter and a “devil’s bathtub,” which is a cool way to describe a creepy hole with water in it. Source: Bourbon Ridge Retreat

The largest freshwater cattail marsh isn’t in Florida or Louisiana, it’s actually in Wisconsin. The Horicon Marsh is an important habitat for redheaded ducks, Canadian geese and great blue herons. Over 268 different species of birds have been sighted in the area. Source: Adkotin

The marshland remained unchanged until the arrival of European settlers, who modified it through draining and hunting. However, after it was deemed a wildlife refuge in 1927, water levels returned and it’s once again wild. Source: Birding is Fun 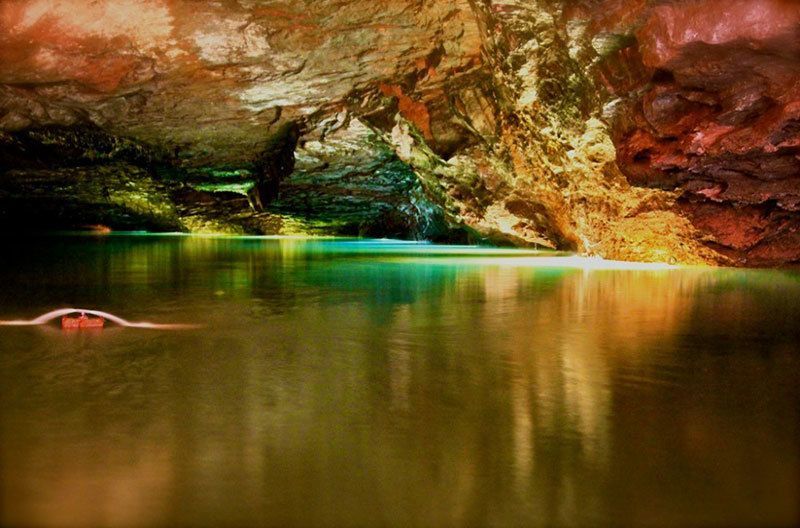 The United States’ largest non-subglacial underground lake is located outside of the small town of Sweetwater, Tennessee. The lake is part of an extensive cave system called Craighead Caverns. Source: Travel Mindset 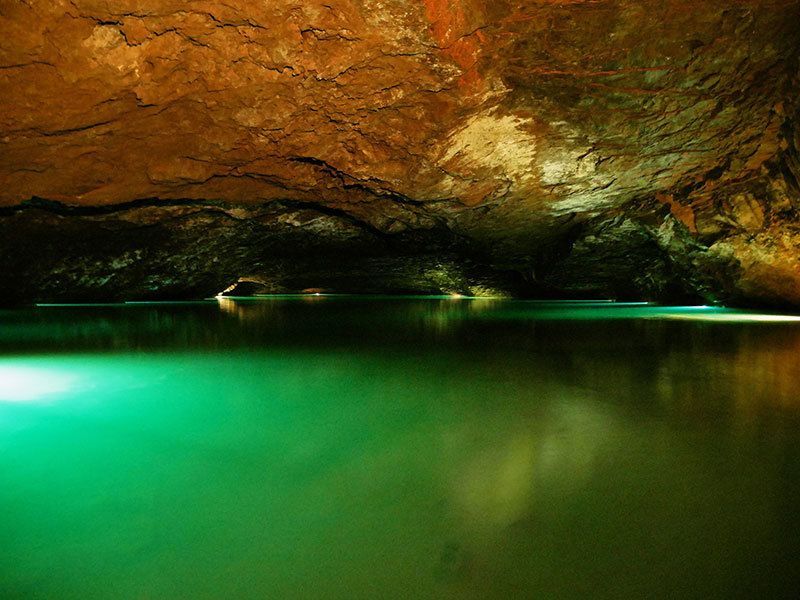 Explorers have mapped 13 acres of water and discovered more cavernous rooms beneath the lake. The Lost Sea is marked by “cave flowers,” a rare phenomena that worked to have lake named as a National Landmark. Source: Lake Scientist 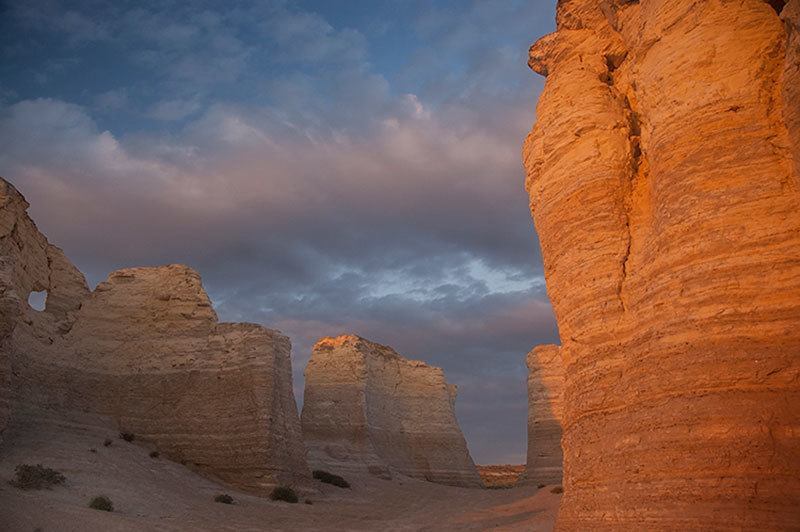 These beautiful rock formations aren’t in the desert of Arizona, but rather in Kansas, in the middle of grassland. Oh, and they’re made out of chalk. Source: Tourist Destinations 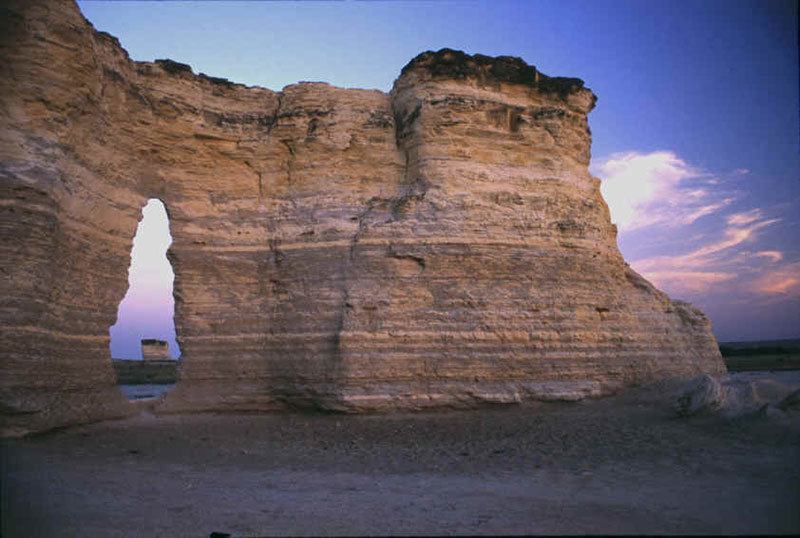 The Monument Rocks also have the accolades of being named the first national natural landmark by the Department of the Interior. They rise up 70 feet and are estimated to have been formed 80 million years ago. The formations are important shelters for birds, particularly the American kestrel who hunts across the prairie. Source: Nature's Arches and Bridges 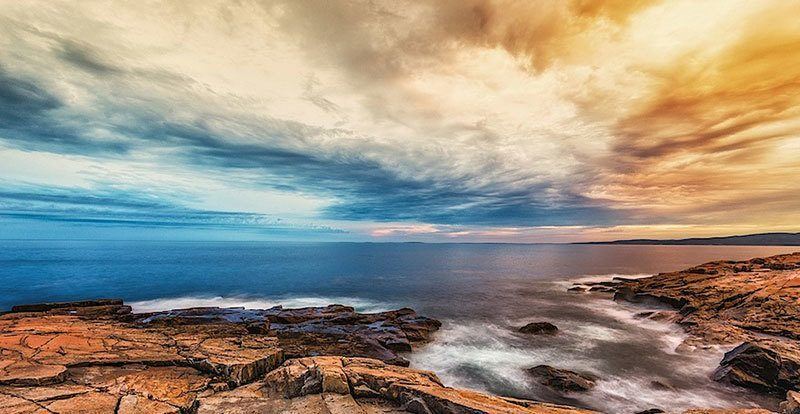 Mount Desert Island looms over the water like a mountain, which is how it got its name. The island only has 10,000 year round residents, but visitors come to see Acadia National Park, which is located on the island. Source: Matador Network 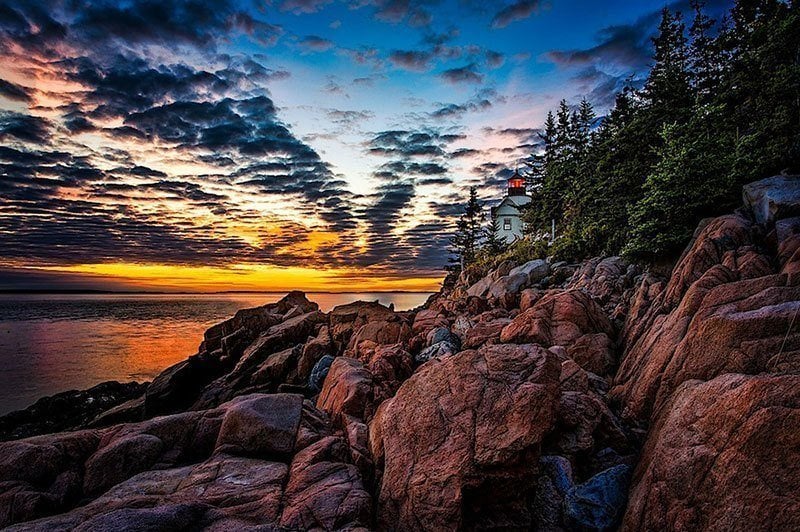 The island dates back 550 million years ago when it was just a sea-floor mud deposit, created by volcanic ash. Eventually, the island rose and glaciers eroded its landscape, as visible in the extremely rocky landscape. Source: Matador Network 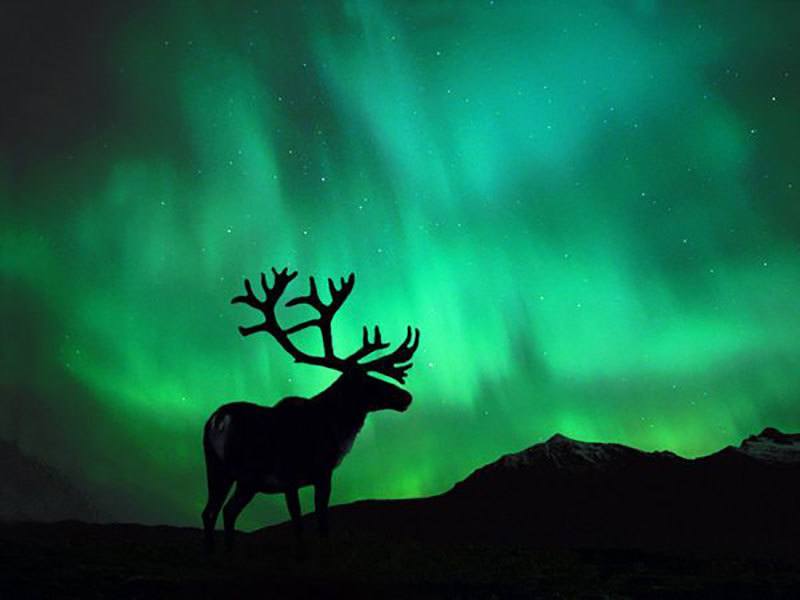 Alaska is one of the best spots on the planet to see the Northern Lights or the Aurora Borealis. Caused by solar winds, the aurora looks like a rainbow doing yoga as it moves across the sky. Source: National Geographic 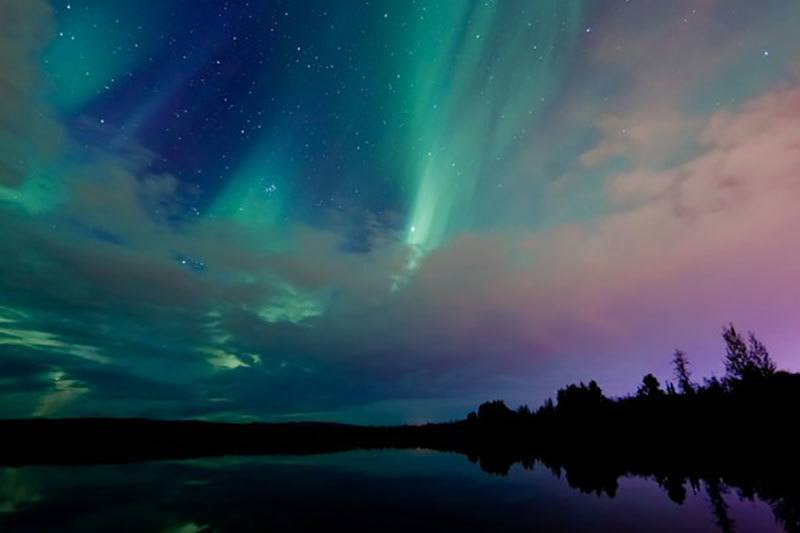 The Northern Lights are best observed in the winter when it’s darkest in Alaska. The displays take place 60 to 70 miles above the Earth, higher than a plane flies. Source: National Geographic 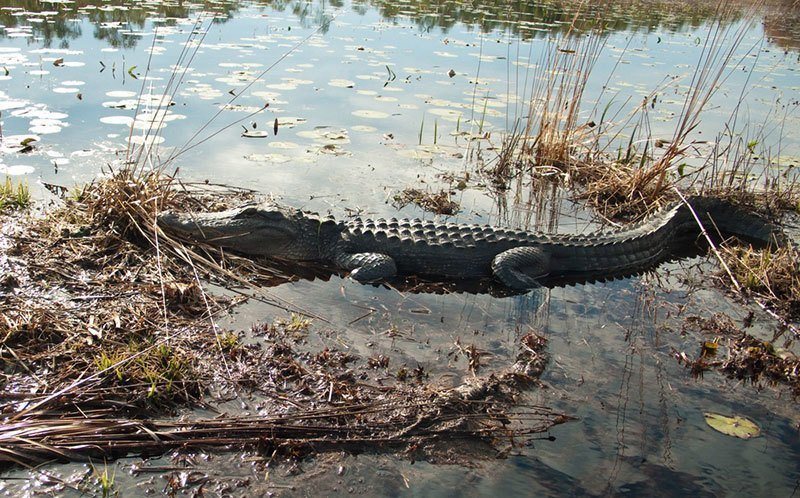 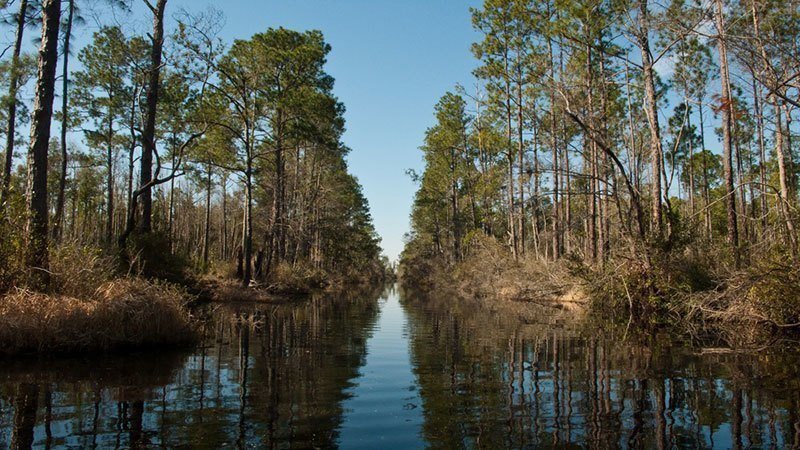 The shaking waters could come from the sound of the male alligator as it bellows throughout the swamp. Be prepared for awesome paddling treks through 120 miles of swamp trail, just don’t fall in. Source: Luxagraf 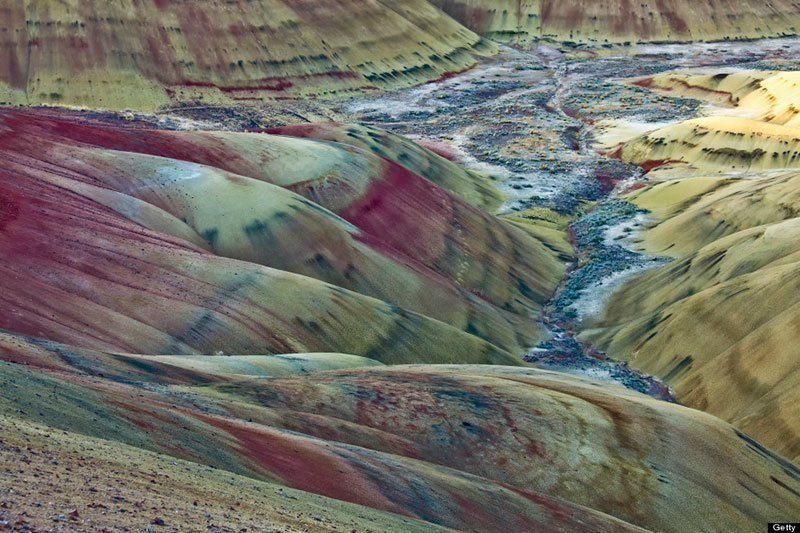 One of Oregon’s 7 natural wonders are the painted hills near the town of Mitchell. Millions of years of history are exposed in the layered hills of the area like geological water painting. Source: Love These Pics 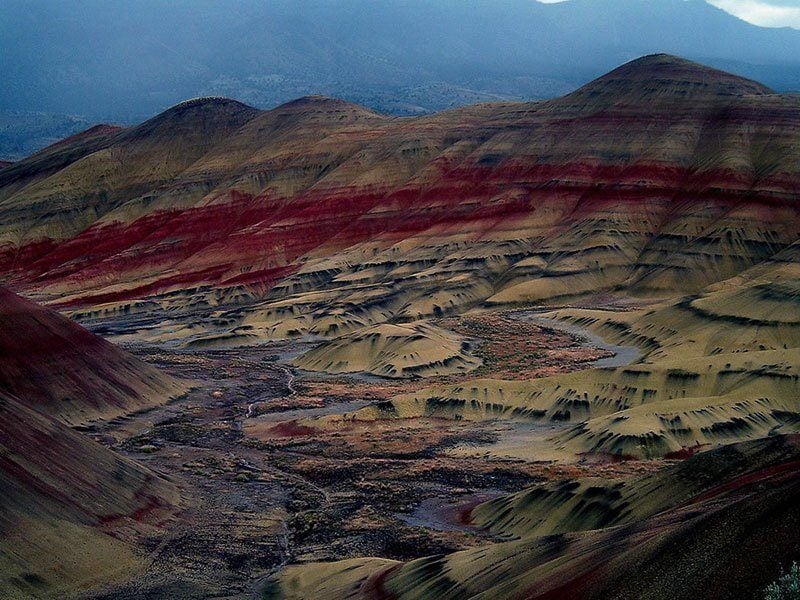 Many ancient fossils have been discovered in the area, including early horses, camels and rhinos. The red coloring of the formations is due to laterite that was created by floodplain deposits. Source: Love These Pics 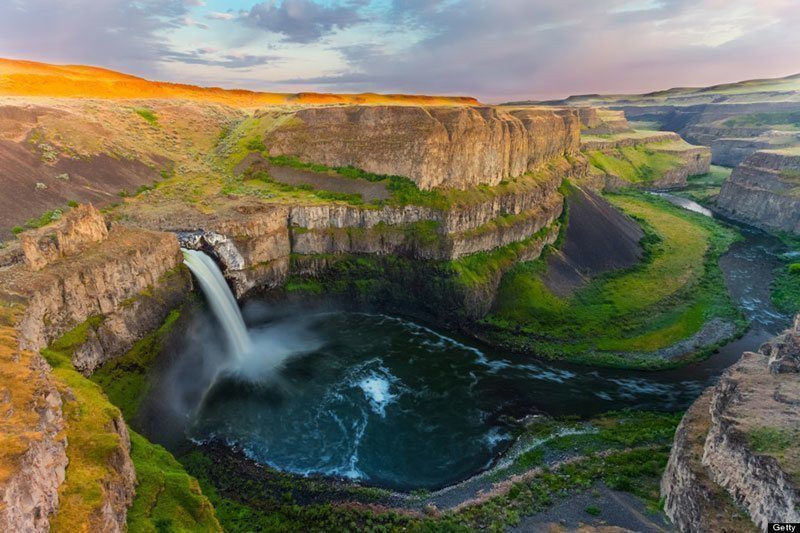 Washington’s Palouse Falls consists of upper falls at a drop of about 20 feet, which lead to the main drop and lower falls around 180 feet high. Rock benches, plunge pools and potholes have imprinted the surrounding landscape. Source: Matador Network 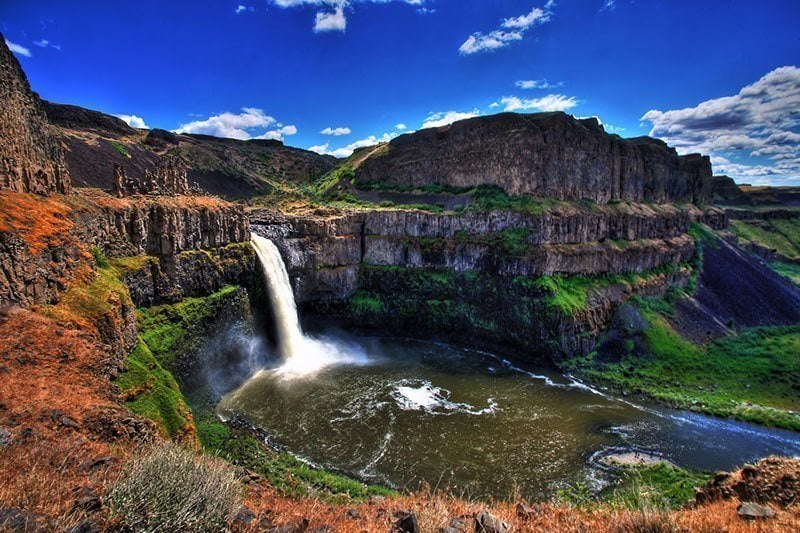 Kayaker Tyler Bradt ran the falls setting an unofficial world record for highest waterfall run. Lacking that kind of bravery, most of us just enjoy the pristine beauty of the locale. Source: Reddit 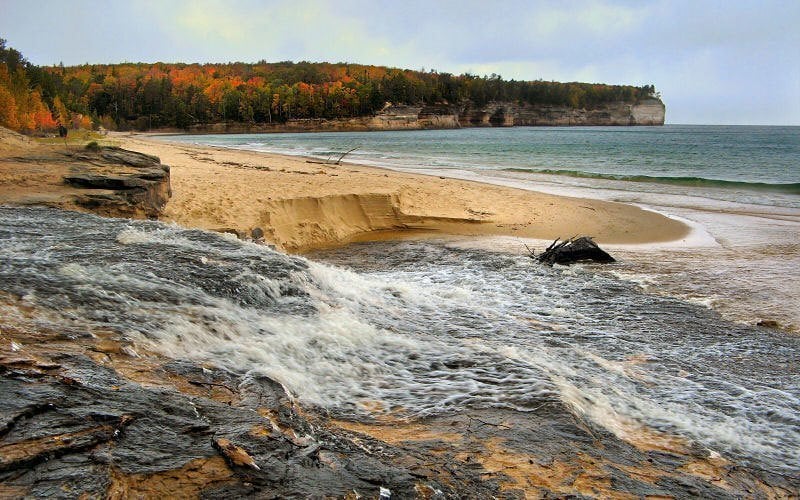 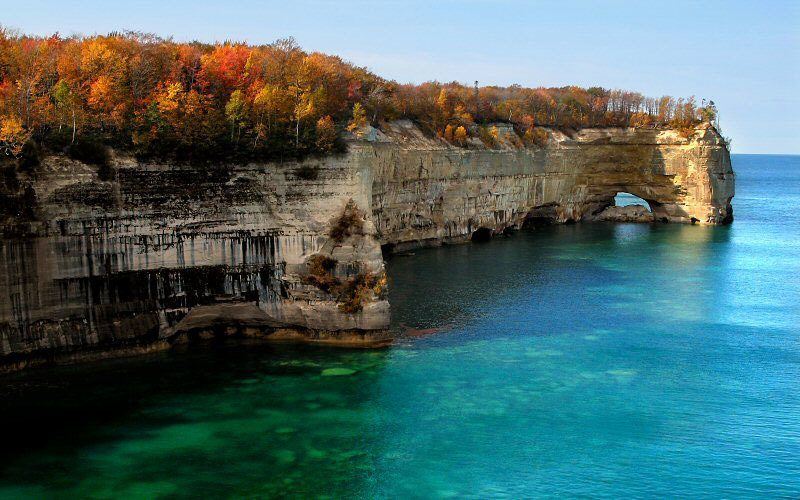 The colors of the painted rocks come from the large amount of minerals in them. The area contains most of Michigan’s waterfalls and makes for great recreational activity or even video production. In 2010, Kid Rock filmed the video for his song Born Free at the lakeshore. If he knows about it, you should too! Source: Random Space

For more natural wonders, check out Fly Geyser and our list of the most stunning natural destinations in Europe!