Forget Las Vegas or Area 51, Fly Geyser in Nevada offers much brighter and otherworldly sights at a much cheaper cost.

Nestled on a patch of private land in Nevada’s Black Rock Desert, the Fly Ranch Geyser (known commonly as the Fly Geyser) is one of the state’s coolest attractions, though many residents still do not know it exists.

Fly Geyser, which spews waters about five feet high, lies about a third of a mile from State Route 34, a road which functions as the only viewpoint since the geyser is not open to the public.

Before becoming the Martian-esque, “We come in peace” waterworks it is today, the Fly Ranch Geyser was just an ordinary man-made well drilled in the early 1900s. Eventually piping hot, geothermally heated water began to rise through cracks in the well and up to the ground’s surface through what is now Fly Geyser. Though workers tried to cap it off and prevent leakage of the hot water, their efforts were obviously unsuccessful.

In 1964, Fly Geyser began erupting with scalding water in multiple places, after a second poorly-capped well was dug not far from the first.

The repetitive eruptions dissolved minerals and over time, the mineral deposits developed the mount and various terraces that now surround the ever-growing geyser. And thanks to thermophilic algae that thrive in the wet, hot conditions created by the geyser, breathtaking reds and greens streak the mounds.

While the original Fly Geyser no longer hisses steaming water, another mount two additional geysers in the area have followed in its path. Though the attraction is located on private land and not open to tourists, visitors who make arrangements with the owners ahead of time are often able to get a closer look for a fee.

Source: In A Resort 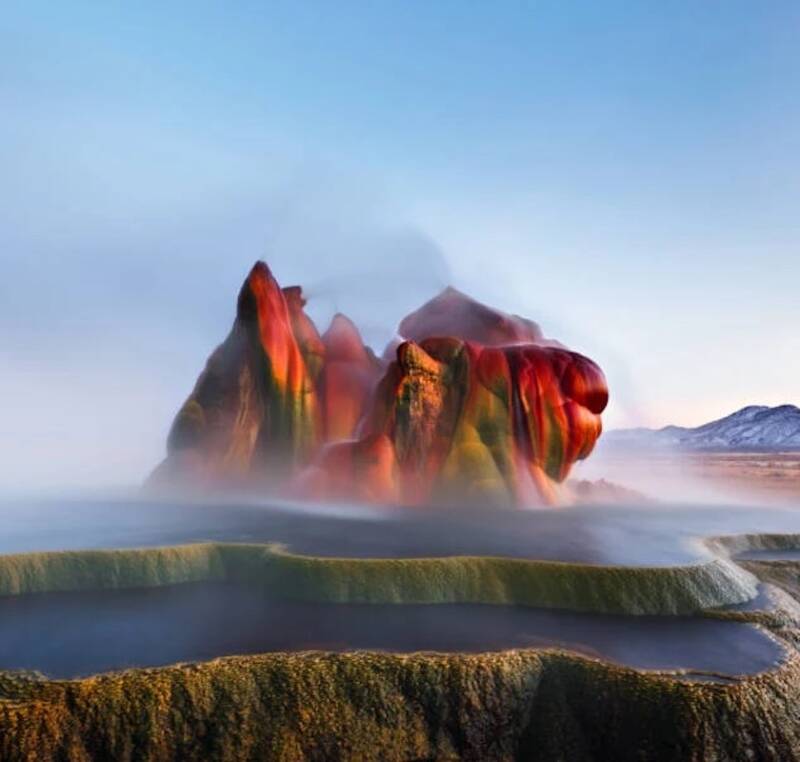 Videos Of Fly Geyser In Action

And if you enjoyed this article on Fly Geyser, be sure to see All That Is Interesting’s posts on the world’s most surreal places and incredible photographs of Iceland!