How The Cliffs Of Moher Became Ireland’s Most Majestic Attraction

Formed over 300 million years ago, the Cliffs of Moher are striking not only for their beauty but also for their fascinating history. 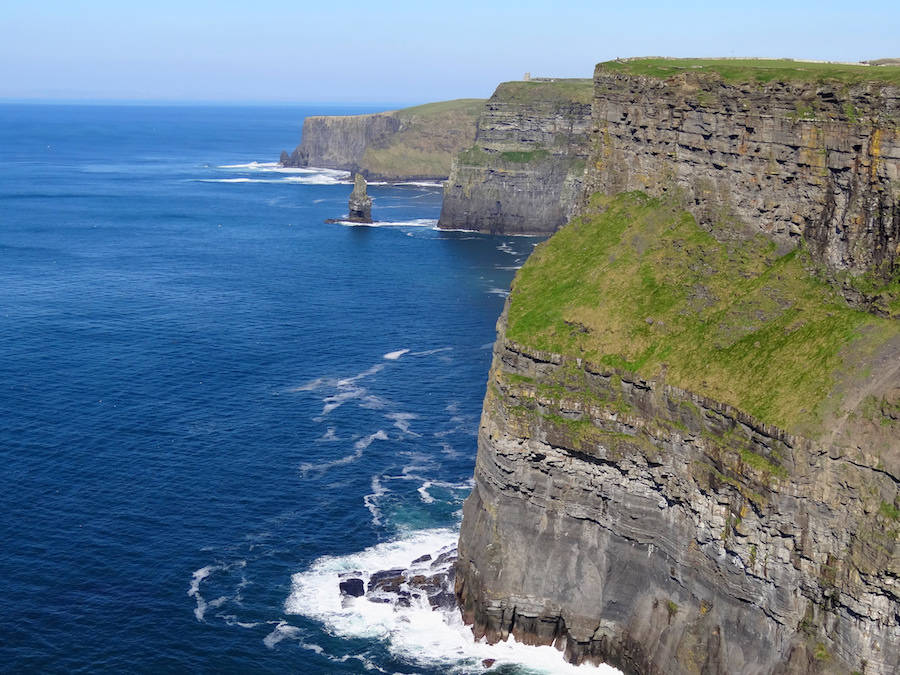 Wikimedia Commons The Cliffs of Moher began to form during the Upper Carboniferous period.

Standing 700 feet high and running for about 9 miles, the majestic Cliffs of Moher are the crown jewels of Ireland’s west coast. With their astounding height and breathtaking views, these rock formations are some of the most visited natural attractions on the Emerald Isle.

But the Cliffs of Moher are famous for more than just their beauty. Formed over 300 million years ago, they boast a fascinating history — and mythology. From mermaids to a lost city, there’s no question that these cliffs have inspired some of the most interesting Irish folktales.

Even in recent years, the Cliffs of Moher have served as an ideal backdrop for a number of Hollywood fantasy films — including Harry Potter and the Half-Blood Prince and The Princess Bride.

Take a closer look at these famous cliffs — and learn the many reasons why over a million people visit them each year.

How The Cliffs Of Moher Formed 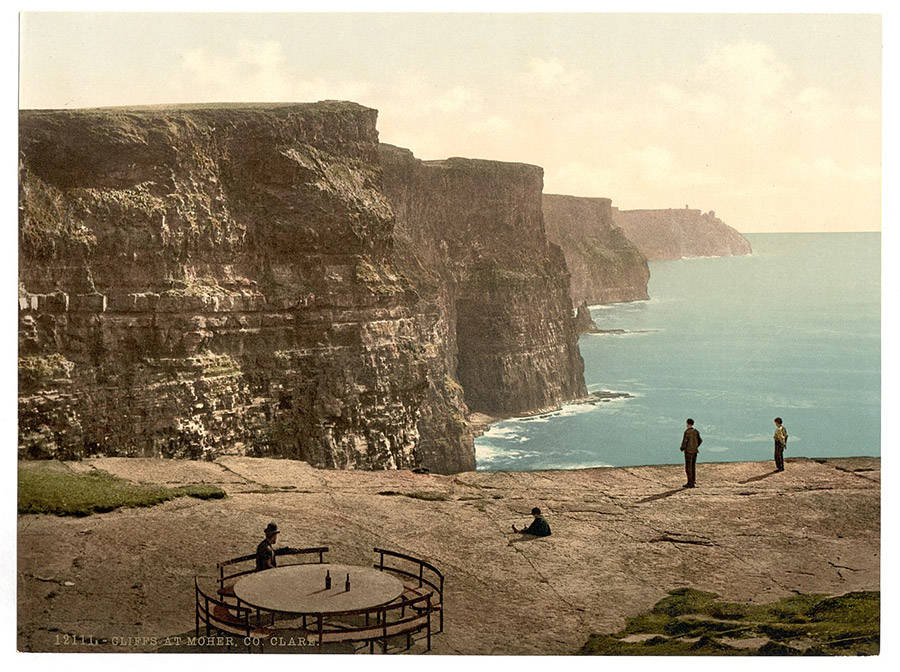 Wikimedia CommonsA 19th-century photochrom postcard of the cliffs, with Leacmayornagneeve rock in the foreground.

Sitting at the southwestern edge of the Burren region in Ireland, the rocks that make up the Cliffs of Moher first began to form during the Upper Carboniferous period.

The formation started about 320 million years ago, when the region was far closer to the equator than it is today. Around this time, a landmass was located to the southwest of an ancient marine basin. Heavy rainfall on this piece of land caused massive floods that washed sand and mud into rivers that flowed northeastward to the sea.

The sand and mud ended up getting dumped into the sea at the mouth of a delta. In the millions of years that followed, the sediments became solid rock. And thanks to the movement of the earth’s plates, these rocks would move further north — establishing the Cliffs of Moher as they are today.

Even if you’re not a rock expert, you can see the advanced age of the cliffs thanks to their striking bands of sandstone, siltstone, and shale. Each rock layer tells its own historical tale that represents a particular event in the story of the ancient delta. Even more incredible, these rock formations are clearly visible above sea level.

From the top of the cliffs, you can also see caves and sea stacks, including a famous one called Branaunmore (meaning “Big Prince” or “Big Raven”). This sea stack was separated from the cliffs due to erosion.

The sea stack lies just below O’Brien’s Tower, an observation tower built in 1835 by Sir Cornelius O’Brien, a self-proclaimed descendant of the first High King of Ireland. From this tower, the view of the cliffs is spectacular.

And if you’re lucky, you might also be able to spot the Aran Islands, the Twelve Bens mountains, and a narrow piece of land called Loop Head, which is marked by an intriguing lighthouse.

The Folklore Of The Cliffs 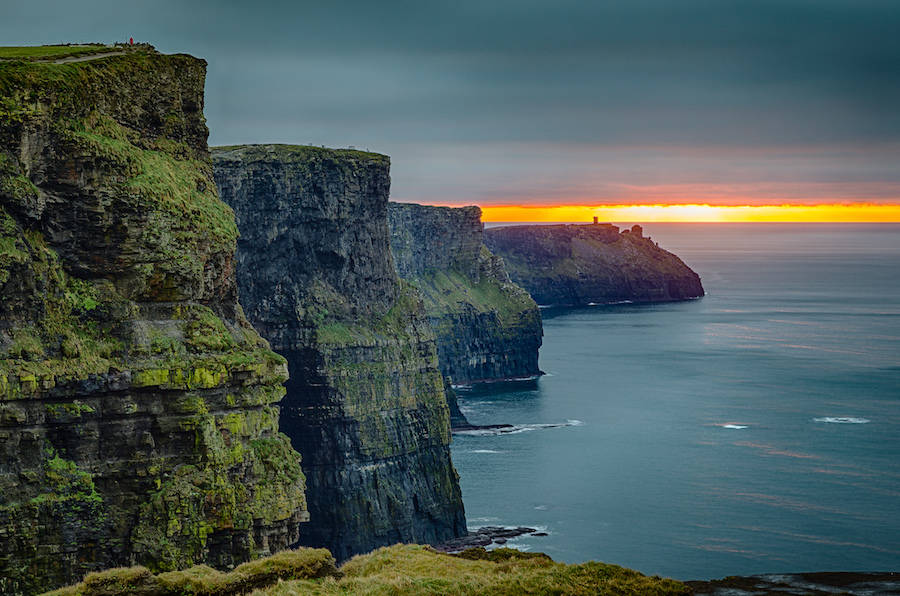 Mobilus In Mobili/FlickrThe Lost City of Kilstiffen is said to remain underwater near the cliffs.

The Cliffs of Moher, like many natural wonders, have inspired several folktales throughout the centuries.

As for the cliffs themselves, they got their name from a promontory fort called Mothar or Moher, which once stood near the rock formations. This fort would ultimately be destroyed in the early 19th century to provide material for a signaling tower at the southern point of the cliffs — Hag’s Head.

The name Hag’s Head comes from a legend about a “hag” known as Mal who became infatuated with an Irish warrior named Cúchulainn. As the story goes, she chased her love all over Ireland until he got to the Cliffs of Moher. Though he leapt to a nearby piece of land, Mal still followed. However, she eventually lost her footing and fatally crashed into rocks.

To this day, the rocks at Hag’s Head are believed to form the shape of Mal’s profile — the face of an ill-fated woman gazing out to sea.

The Mermaid of Moher experienced a slightly better fate. This tale begins with a local fisherman who meets a mermaid with a magic cloak. In an effort to trap the mermaid, the man steals the cloak and then runs for his house. Since the mermaid needs the cloak to return to the water, she tries to search for it inside the home.

Unable to find the cloak, she agrees to marry the fisherman and even has a couple of children with him. However, she manages to find it years later, while her husband is out fishing. The mermaid triumphantly returns to the sea — never to see her family on land ever again.

Then there’s the myth of the corpse-eating eel. As the legend goes, Irish Saint Macreehy killed a giant eel after it somehow ventured into a nearby cemetery — to feed on the dead bodies beneath the graves.

When the water is at low tide at the cliffs, two visible stones are said to mark the bed of Macreehy. And for generations, a carving of the legendary eel appeared on one stone until it slowly disappeared.

But of all the legends, the Lost City of Kilstiffen may be the most fascinating. The city was said to have sunk underwater at the foot of the cliffs after the leader lost the golden key that opened the castle doors.

According to the myth, the city will remain underwater until the key is found again and returned. Some believers say the key is hidden underneath a gravestone on a mountain called Slieve Callan. Others claim the key is in a lake on top of another mountain. And as for the city itself, some visitors have claimed to see the city shining below the surface.

But in one eerie version of the story, the city rises every seven years. And if a person witnesses it, they’ll die before it rises again.

The Cliffs Of Moher In Modern Times 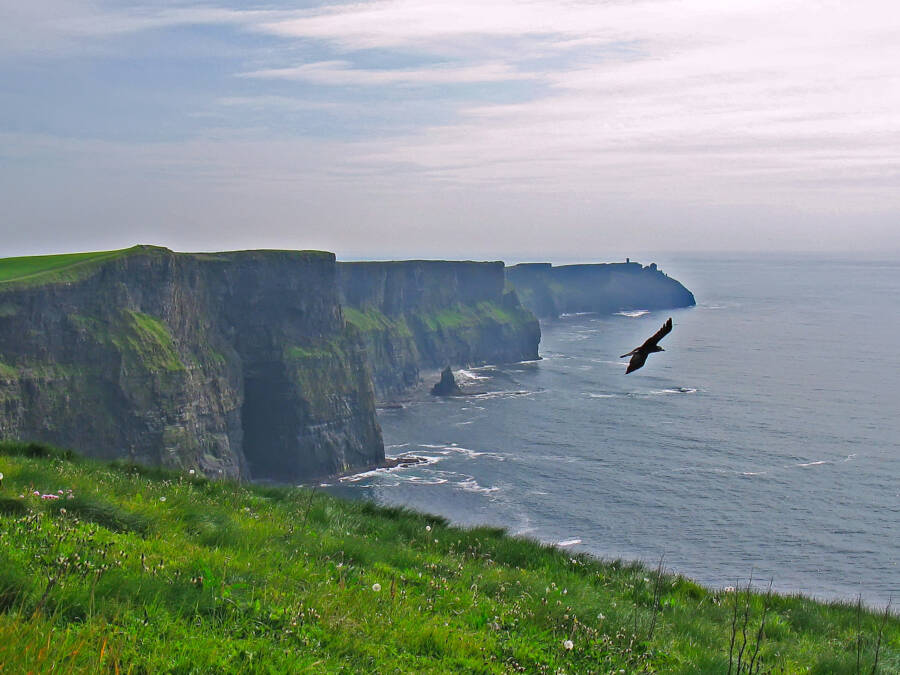 Simone A. Bertinotti/FlickrSome 20 species of birds call the Cliffs of Moher home.

While you probably won’t spot a mermaid or corpse-eating eel near the Cliffs of Moher today, you’ll likely see some of the area’s local wildlife.

Ever since 1989, the cliffs have been designated as a Special Protection Area for birds. Some 20 species of birds live on or near the cliffs, including razorbills, puffins, kittiwakes, and even falcons.

Visitors arriving in late February may catch a glimpse of seabirds like razorbills and great black backed gulls migrating back to the area. And if you come around the end of March, you may get to see the Atlantic puffin.

There are also plenty of marine animals living near the cliffs, including seals, whales, dolphins, and basking sharks — which are the second-largest living sharks in the world.

Being such a unique and spectacular site, the cliffs have appeared in various shows and movies in recent years. Most notably, they served as the location for the “Cliffs of Insanity” in the 1987 film The Princess Bride.

The cliffs were also used in a pivotal scene in 2009’s Harry Potter and the Half-Blood Prince, which features the lead character and Albus Dumbledore. Just one year later, the cliffs made an appearance in 2010’s Leap Year, starring Amy Adams.

There have even been a few music videos shot at the Cliffs of Moher, including Maroon 5’s “Runaway” and Irish band Westlife’s “My Love.”

Visiting The Cliffs Of Moher 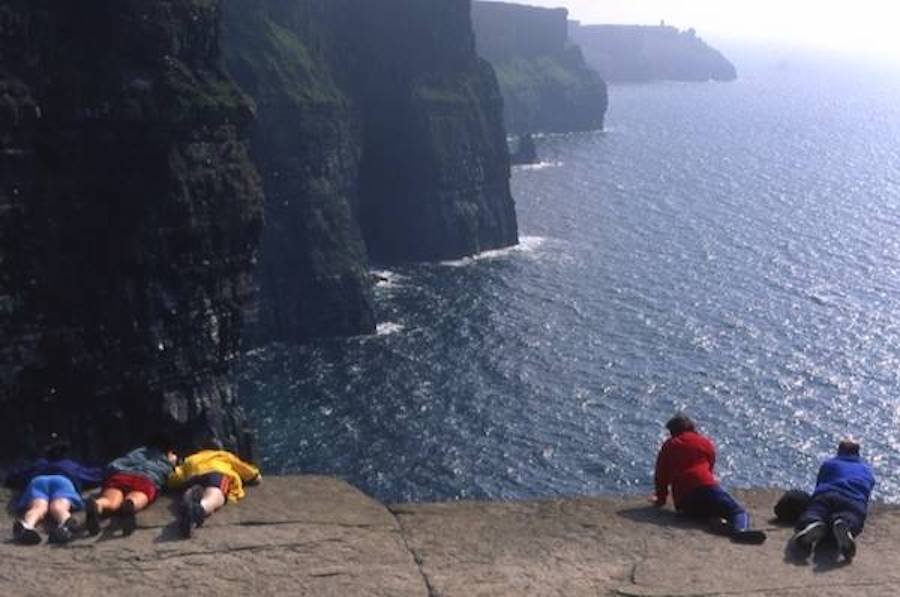 Anne Burgess/Wikimedia CommonsTourists looking over the edge of the Cliffs of Moher.

Thanks to Hollywood, word of mouth, and now Instagram, of course, the Cliffs of Moher are one of the most visited attractions in all of Ireland. They’re one of the highlights along the Wild Atlantic Way, a breathtaking driving route that snakes along the western coastline of Ireland.

In 2011, the Burren and Cliffs of Moher UNESCO Geopark became part of the Global Geoparks Network. Just a few years later, this network became a UNESCO designation. This gives organizations a better chance at protecting the cliffs, and it also provides opportunities for more sustainable tourism.

However, the natural wonder is still in constant danger of coastal erosion due to the waves crashing at the foot of the cliffs. As one might expect, this can also cause rockfalls and landslides — which can be dangerous for explorers who wander too far off track.

The good news is that even though there are several high-risk areas, there is a marked path where visitors can walk safely.

And since the cliffs are so massive, it’s also possible to get a great view of them from a distance, especially if you’re near the coastline. Some might even prefer to see them from the water — as there are quite a few boat tours and cruises that offer this perspective.

But no matter which way you decide to view them, there’s no question that the Cliffs of Moher are worth a visit if you happen to be in Ireland.

After learning about Ireland’s Cliffs of Moher, check out these 18 European natural wonders. Then read about the the world’s weirdest natural places.