The Shocking Story Behind This Photo Of Ruth Snyder’s Execution

Ruth Snyder's crime and execution were nothing special until a photo of her electric chair in action ended up on the front page of the daily news. 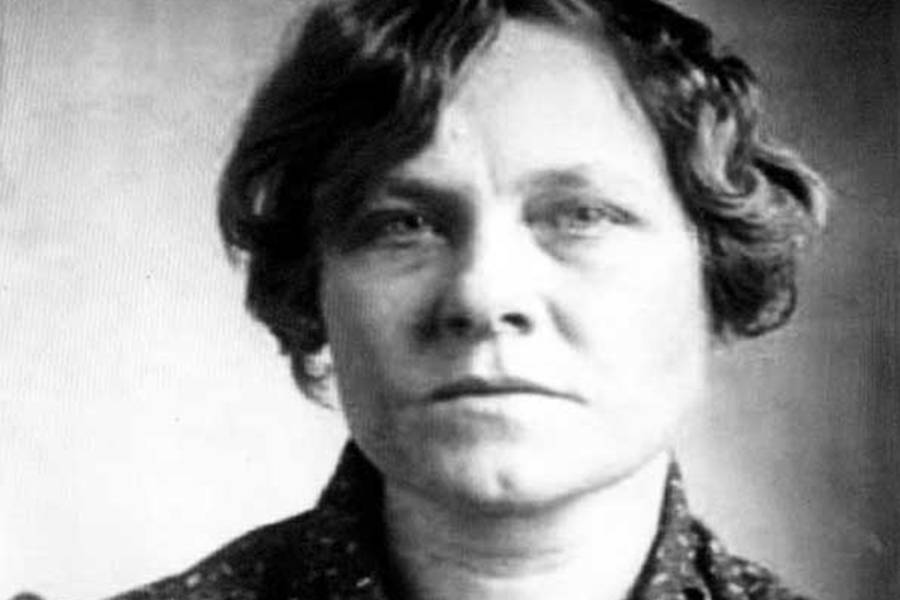 Tensions were high as Tom Howard walked into New York’s Sing Sing prison on the afternoon of Jan. 12, 1928. As he made his way through security and into the execution chamber, he stepped carefully as he was carrying contraband that if found, was certain to get him ejected or possibly arrested.

Strapped to his right ankle was the reason for his careful footsteps. A custom single-use camera, a miniature version of a classic model, was neatly tucked beneath his pant cuff. A wired shutter release ran up his leg, the button within undetectable reach of his hand.

Photography was strictly prohibited during executions and the rule was enforced even more so at Ruth Snyder’s. The press had been enamored with her case since it broke and were clamoring to be allowed in to photograph her final moments. As an unknown out of towner, Howard was the only one who had managed to smuggle a camera in.

After Snyder was brought in, the small crowd watched as she was strapped to the chair. When it was turned on, Howard pointed his toe toward her chair and snapped a single photo. Though Ruth Snyder was dead, her photo lived on.

Who Was Ruth Snyder? 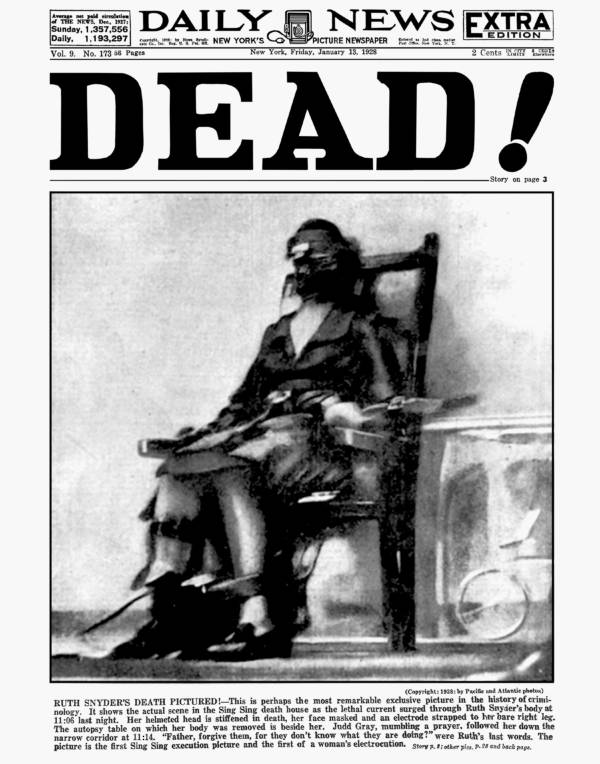 Ruth Snyder knew she wanted to kill her husband almost from the moment she met him.

Albert Snyder seemed to be continuously and hopelessly devoted to his late fiancee Jessie Guishard. Even after marrying Ruth, he proclaimed Guishard (who had been dead for 10 years) to be the finest woman he had ever met. At one point, he hung a picture of her on the wall of their home and then insisted upon naming his boat after her.

So Ruth, shunned by a man in love with a dead woman, took a lover by the name of Henry Judd Gray. Gray was a corset salesman who lived in Queens Village, where the Snyders made their home, and the two had met in town. Shortly after meeting, the two began to plot Albert’s murder.

First, Ruth persuaded Albert to purchase life insurance, a $48,000 policy that had a double indemnity clause, meaning that if Albert died from an unexpected act of violence (say, murder), Ruth would get double the money. Then, Ruth and Gray began to plot.

According to testimony Gray gave after he was arrested, the couple tried to kill Albert seven times before they actually succeeded. Finally, on March 20, 1927, they managed to kill him. After garrotting him, and stuffing his nose with chloroform-soaked rags, they staged his death and the home to appear as if it had been burgled.

The police quickly saw through her lies, after a hastily constructed tale of the so-called burglary fell through. A few days after Albert’s death, both Gray and Ruth were arrested. Though Ruth maintained her silence throughout questioning, Gray folded almost immediately under pressure, fessing up to the entire crime. Upon hearing Gray had confessed, Ruth turned on him, claiming it was his idea from the start.

Both were convicted of murder and sentenced to death. 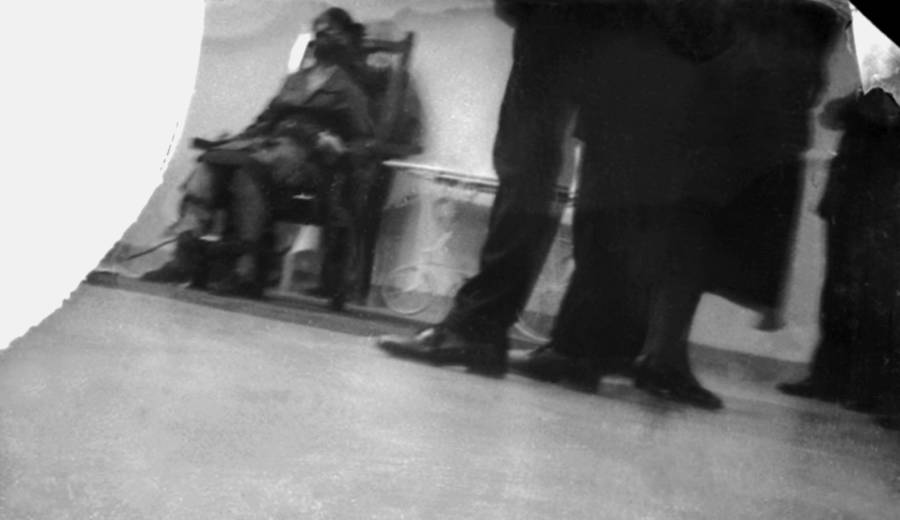 The press coverage of Ruth Snyder’s trial had been covered by the biggest names in crime reporting, such as James M. Cain. Cain would later write a novella which would be turned into the film “Double Indemnity,” which loosely mirrors the Snyder case.

The attention given to the case by reporters had successfully turned it from a small town murder into a sensational nationwide crime. As soon as the people heard there would be an execution, the first woman’s in 30 years, everyone wanted a piece of the action.

However, when the police heard that everyone wanted coverage, they shut it down. While photography was usually prohibited in executions, Sing Sing guards took it especially seriously in Ruth’s case. No member of the media would get in with a camera, that much the guards were sure of.

Little did they know what Tom Howard had up his sleeve – or his pant leg, to be exact. 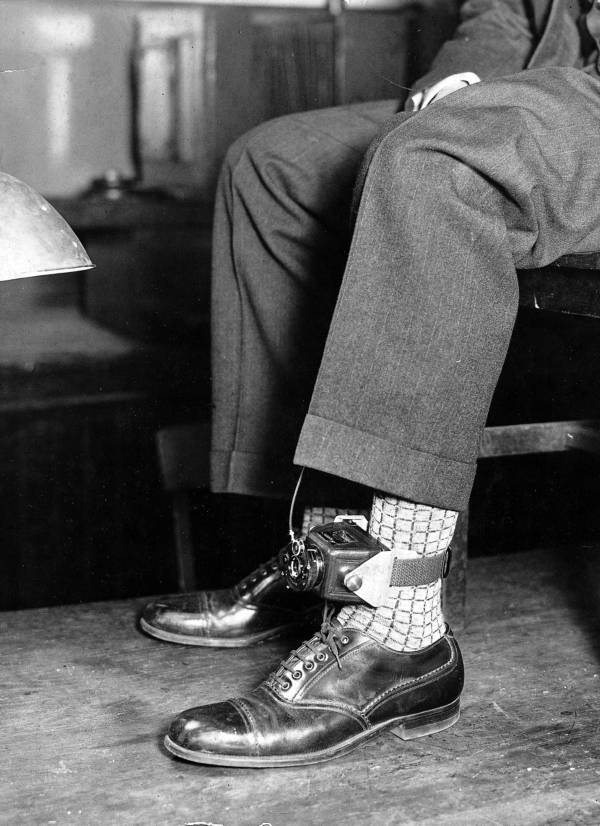 The editors of the New York Daily News knew that the Sing Sing guards were familiar with all of their reporters, so they outsourced. Howard, a photographer for the Chicago Tribune which owned the Daily News, agreed to go to Sing Sing as an undercover reporter.

The photo he took was angled slightly and blurry, but nonetheless priceless. Despite not being able to even see what he was taking a photo of, and having to guess his aim by using the toe of his shoe as a pointer, the photo was ultimately a good one. The morning after the execution, the photo was splashed across the front page of the New York Daily News under a headline that simply read: “DEAD!”

The photo was instantly hailed as the most famous tabloid photo of the decade, and indeed, it was. The photo itself — as hazy it was — was shocking. The image of Ruth Snyder’s fingers curled around the arms of the electric chair haunted audiences for years.

Howard was given a $100 bonus for the photo, which caused a change in prison procedure. For decades after, anyone attending an execution was thoroughly searched before they were allowed in the room – with particular attention paid to pant legs.

After learning about Ruth Snyder and the first picture of an electric chair execution, check out the story of Dolly Osterreich, who kept her secret lover stowed away in her attic for years. Then, read the story behind that iconic photo of Einstein with his tongue out.