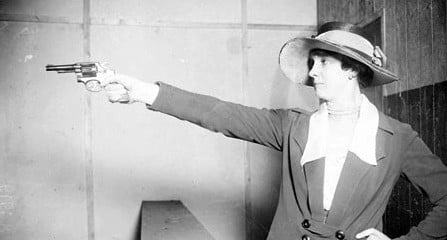 Turn of the century reporters summed Alice Clement up as “furs, heels and jujitsu.” Appointed on August 5th, 1913, Clement was the only woman in the class of almost 100 new police detectives and would remain so for many years after.

Clement’s appearance was often the focus of the day’s newspapers, and it may not have been entirely because she was female. The 5’3’’ detective would routinely bust onto a Chicago crime scene in beautiful gowns and an attractive bobbed haircut en vogue in the early 1920s–all while brandishing a tommy gun. If Clement’s choice of livery didn’t announce her presence, her larger-than life personality certainly did. Clement’s trademark command, which has become something of a crime-drama standard these days, often announced her presence before her glittering jewels: “Back! Line up! Right against that wall!”

While some newspapers of the day poked fun at her, Clement made no apologies whatsoever for her femininity. In fact, she owned it. She was also seriously passionate about her work and didn’t see any reason that the two aspects of her personality need be mutually exclusive: each night she lay her roller-clad head down for some beauty sleep — with her gun under her pillow. Her girl-power belief system extended into social issues of the day, and she was a major advocate not just for women’s rights (including, of course The Vote) but the repeal of prohibition.

She also believed in a woman’s right to become independent from a stale marriage and herself sued her first husband for divorce (in an era where it was virtually unheard of to do so) for “desertion and intemperance.” It took four years for the divorce to be granted, but as soon as it was, she married her second husband — in the presence of a female pastor.

Clement certainly had plenty of fans in the media, but not necessarily among the police force. Her superior, a man named Chief McWeeny, eventually became so fed up with her successful presence there, and the eventual addition of new female PDs, that he resigned. However, many of those on the force and around Chicago crime scenes recognized the value of female PDs who could go undercover and infiltrate otherwise difficult to bust crime scenes.

One of her most famous cases inspired an Agatha Christie serial, The Dulcimer, which involved the murder of a young woman who was most likely a prostitute gravely ill with Typhoid. The male detectives on the force assumed that she’d simply succumbed to her “lifestyle” but Clement remained unconvinced. Further investigation revealed that the woman had, in fact, acquired Typhoid as part of a murder plot, the germs entering her body via the strings of a dulcimer she played.

The young woman had recently come into a sizeable inheritance, and an aunt of hers wanted to claim it as her own. Looking for a way to kill the young woman and claim the property as hers, the aunt infected the dulcimer strings with Typhoid bacteria, which succeeded in killing the young woman. Clement’s hunch, and subsequent investigation, revealed that in between the plucking of strings, the young woman would often lick her fingers — giving the aunt’s plan to infect the instrument full credence.

When Clement went to apprehend the aunt for the murder, she got a confession — but never got her to fully admit the motive. Before they were able to remove her from the home, the woman stabbed herself in the neck with a pen knife, a mortal wound from which she did not recover.