Clement wasn’t all about the high-profile murders, though. She was just as likely to be seen aiding in the rescue of civilians after a street accident, or, as one reporter tells it, wading into the harbor (in her pearls and frock, no less) to rescue passengers from a capsized vessel. Clement also walked the city streets, rescuing runaways and destitute girls, giving them hope when she could. Years of these types of interactions inspired Clement to create a film, Dregs of the City, which ran in theatres alongside Ethel Barrymore films and had quite a favorable response—in every city except Chicago, which forbade her to show it there. The city archives, unfortunately, have not been able to locate the film; all we have are a few promotional stills. 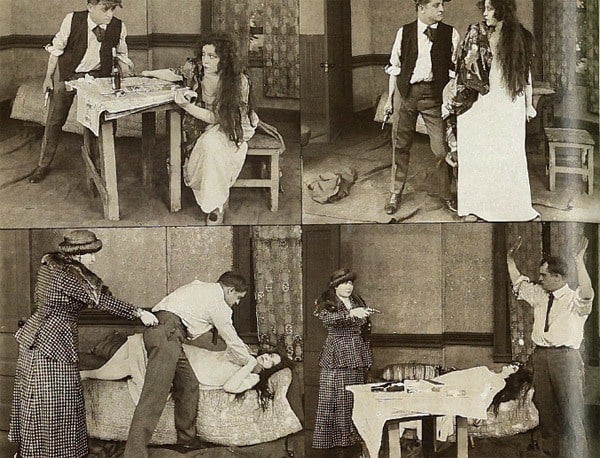 In the wake of the film, Clement collaborated with the media to profile several girls who ruled Chicago’s streets: teenage runaways, prostitutes and showgirls graced the front page of the paper, sharing their stories and giving some humanity to the much wider social issues for women of the day.

This fame didn’t do much for Clement’s relationship with the male-dominated police force, and by the mid 1920s, the tension really began to take its toll. She was demoted and shortly thereafter forced into a medical leave in 1926 due to complications from diabetes, which she had hidden adeptly throughout her entire career. Clement deteriorated quickly, dying the day after Christmas in 1926 at the age of 49.

Her funeral was practically a state event, and Clement was honored not just by her male colleagues, but the growing population of female police detectives whose numbers Clement had no doubt helped create. Her gravestone, however, is a simple unmarked stone that does not bear the well-deserved police star that she would have been most deserving of.

Today there are over 900,000 police officers serving in the United States. 12 percent of them are female. In Alice Clement’s heyday, she was practically one in a million. While she seems to be all but forgotten to history, as very little has been written about her, her influence is clear. Clement’s career helped incite cultural and institutional changes regarding women and security, and if we can’t see it by the number of successful female cops in America’s cities today, we certainly can via the collection of tough gal cops made famous by television crime drama.