Discover The Elephant’s Foot, The Lethal Mass Of Radioactive Material In Chernobyl’s Basement

The Elephant's Foot was created after the Chernobyl disaster in 1986 when reactor 4 exploded, releasing a lava-like mass of radioactive material called corium.

In April 1986, the world experienced its worst nuclear disaster yet when a reactor at the Chernobyl power plant in Pripyat, Ukraine, erupted. More than 50 tons of radioactive material quickly wafted through the air, traveling as far as France. The explosion was so severe that toxic levels of radioactive material plumed out of the plant for 10 days.

But when investigators finally braved the site of the disaster in December of that year, they discovered something eerie: a heap of searing-hot, lava-like chemicals that had burned all the way through to the facility’s basement where it had then solidified.

The mass was dubbed the “Elephant’s Foot” for its shape and color and benign though that moniker is, the Elephant’s Foot continues to release extremely high amounts of radiation to this day.

Indeed, the amount of radiation detected on the Elephant’s Foot was so severe that it could kill a person in a matter of seconds. 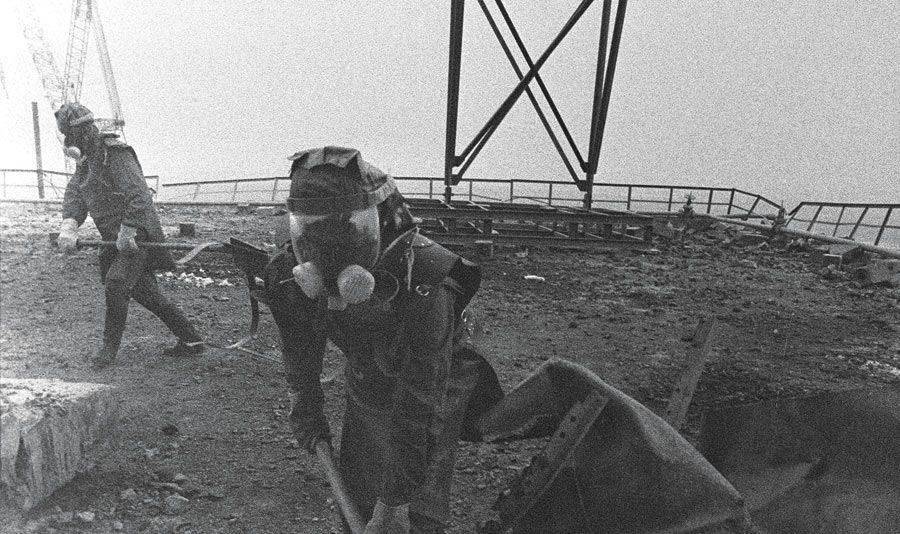 In the early morning of April 26, 1986, a massive explosion at the Chernobyl nuclear power plant in then-Soviet Ukraine led to a meltdown.

During a safety test, the uranium core inside reactor 4 of the plant overheated to a temperature of more than 2,912 degrees Fahrenheit. As a result, a chain of nuclear reactions caused it to explode, ripping through its 1,000-metric-ton concrete and steel lid.

The explosion then ruptured all 1,660 of the reactor’s pressure tubes thereby causing a second explosion and a fire that ultimately exposed the radioactive core of reactor 4 to the outside world. The radiation released was detected as far away as Sweden. 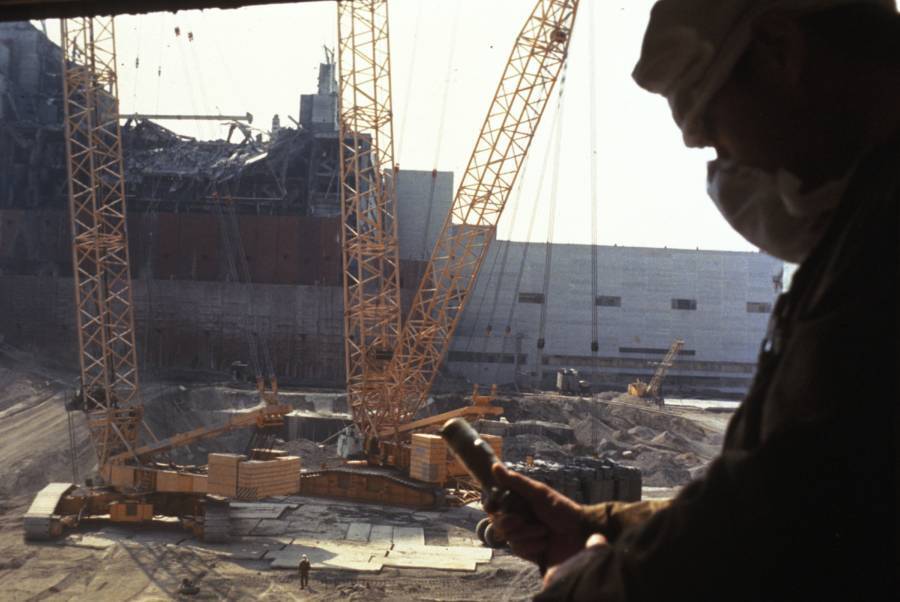 Sovfoto/UIG via Getty Images
Investigators record radiation levels during the construction of a new cover or “sarcophagus” for reactor 4.

Hundreds of laborers and engineers at the nuclear plant were killed within weeks of being exposed to the radiation. Many risked their lives to contain the explosion and subsequent fire at the plant, like 25-year-old Vasily Ignatenko, who perished three weeks after entering the toxic site.

Countless others contracted terminal illnesses like cancer even decades after the incident. Millions who lived closest to the explosion suffered similar, long-lasting health defects. The effects of all that radiation are still felt in Chernobyl today.

Researchers continue to study the after-effects of the Chernobyl disaster, including the shocking resurgence of wildlife in the surrounding “red forest.” Researchers are also trying to quantify the broader ramifications of the catastrophe, including the strange chemical phenomenon that formed in the plant’s basement, known as the Elephant’s Foot.

How Did The Elephant’s Foot Form? 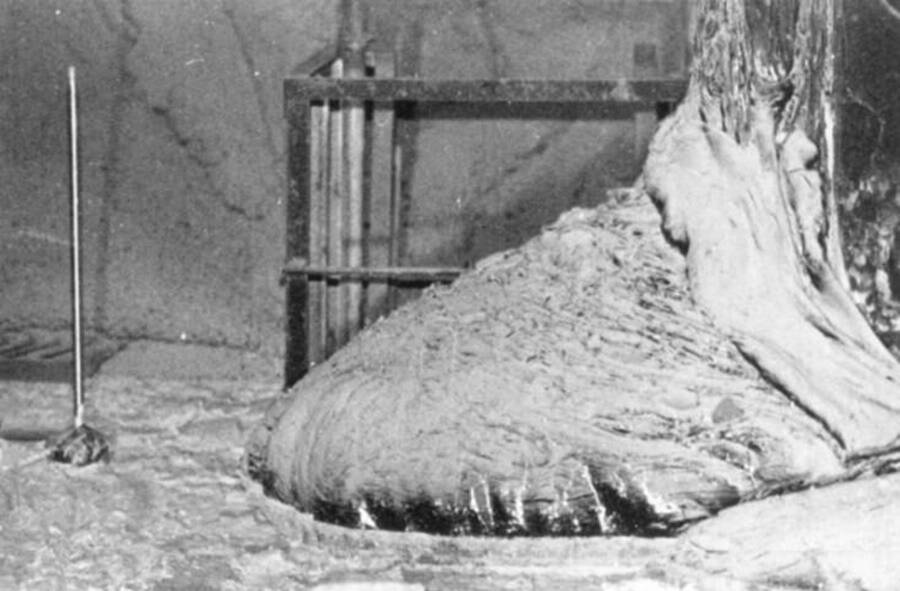 US Department of EnergyThe lava-like mass is a mixture of nuclear fuel, sand, concrete, and other materials through which it melted.

When reactor 4 overheated, the uranium fuel inside its core became molten. Then, steam blasted the reactor apart. Finally, heat, steam, and molten nuclear fuel combined to form a 100-ton flow of searing-hot chemicals that gushed out of the reactor and through the concrete floor to the basement of the facility where it eventually solidified. This lethal lava-like mixture became known as the Elephant’s Foot for its shape and texture.

The Elephant’s Foot is comprised of just a small percentage of nuclear fuel; the rest is a mixture of sand, melted concrete, and uranium. Its unique composition was named “corium” to denote where it began, in the core. It is also referred to as lava-like fuel-containing material (LFCM) which scientists continue to study today.

The bizarre structure was discovered months after the Chernobyl disaster and was reportedly still searing hot.

The Chernobyl incident remains one of the worst nuclear tragedies to date.

The several-foot-wide blob of chemicals emitted extreme levels of radiation, causing painful side effects and even death within a few seconds of exposure.

When it was first measured, the Elephant’s Foot released nearly 10,000 roentgens per hour. That meant that an hour’s exposure was comparable to that of four and a half million chest x-rays.

Despite the risk associated with examining the Elephant’s Foot, investigators — or liquidators as they were called — in the aftermath of Chernobyl managed to document and study it. 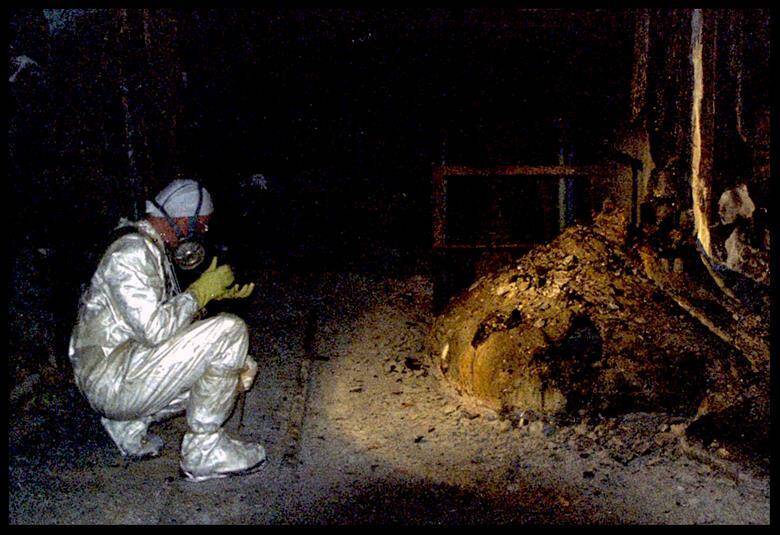 Universal History Archive/Universal Images Group/Getty ImagesThe unidentified worker in this photo likely experienced health problems, if not death, because of their proximity to the Elephant’s Foot.

The mass was relatively dense and could not be drilled, however, liquidators realized that it was not bullet proof when they shot it with an AKM rifle.

One team of liquidators built a crude wheeled camera to take photos of the Elephant’s Foot from a safe distance. But earlier photographs show workers taking photos at close range.

Artur Korneyev, a radiation specialist who took the photograph of the man beside the Elephant’s Foot above, was among them. Korneyev and his team were tasked with locating the fuel left inside the reactor and determining its levels of radiation.

The photograph above was taken 10 years after the incident, but Korneyev still suffered from cataracts and other illnesses following his exposure to the corium mass. 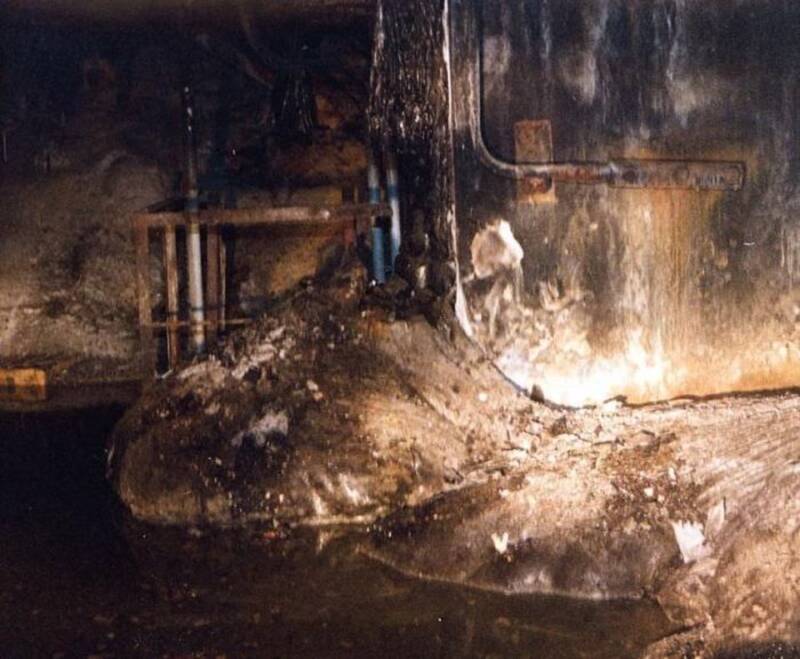 Wikimedia CommonsResearchers have recreated the Elephant’s Foot in a lab in an attempt to understand the materials that are created in a nuclear meltdown.

The Elephant’s Foot no longer emits as much radiation as it once did, but it still poses a threat to anyone within its vicinity.

In order to conduct further studies without risking their health, researchers are trying to replicate small amounts of the chemical composition of the Elephant’s Foot in the lab.

In 2020, a team at the University of Sheffield in the U.K. successfully developed a miniature of the Elephant’s Foot using depleted uranium, which is about 40 percent less radioactive than natural uranium and is commonly used to produce tank armor and bullets. 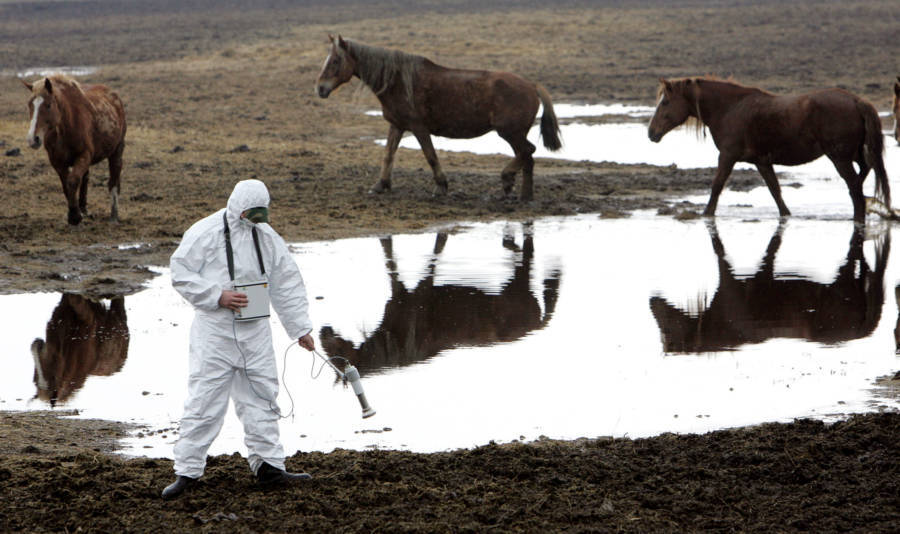 Viktor Drachev/AFP/Getty ImagesAn employee for the Belarussian radiation ecology reserve measures the level of radiation inside the Chernobyl exclusion zone.

The replica is a breakthrough for researchers who are trying to avoid creating such unintentional radioactive masses again.

However, researchers caution that because the replica is not an exact match, any studies based on it should be interpreted with a grain of salt. Andrei Shiryaev, a researcher from the Frumkin Institute of Physical Chemistry and Electrochemistry in Russia, likened the simulation to “doing real sport and playing videogames.”

“Of course, studies of simulant materials are important since they are way easier and allow lots of experiments,” he conceded. “However, one should be realistic about the meaning of studies of only the simulants.”

For now, scientists will continue to look for ways in which the disaster that the Elephant’s Foot represents can be avoided.

Now that you’ve learned about the highly radioactive mass at Chernobyl known as the Elephant’s Foot, check out how scientists are studying radiation-eating fungi at Chernobyl in order to harness its power. Then, read about how Russia launched its own TV show to rehabilitate the country’s image after the success of the HBO series Chernobyl.