Who Was Hitler’s Wife Eva Braun And How Did She Wield Power Behind The Scenes?

After Adolf Hitler's suicide alongside his brand new bride, Eva Braun, everyone wrote her off as a "dumb blonde." But experts now believe she was a mastermind behind Nazi propaganda. 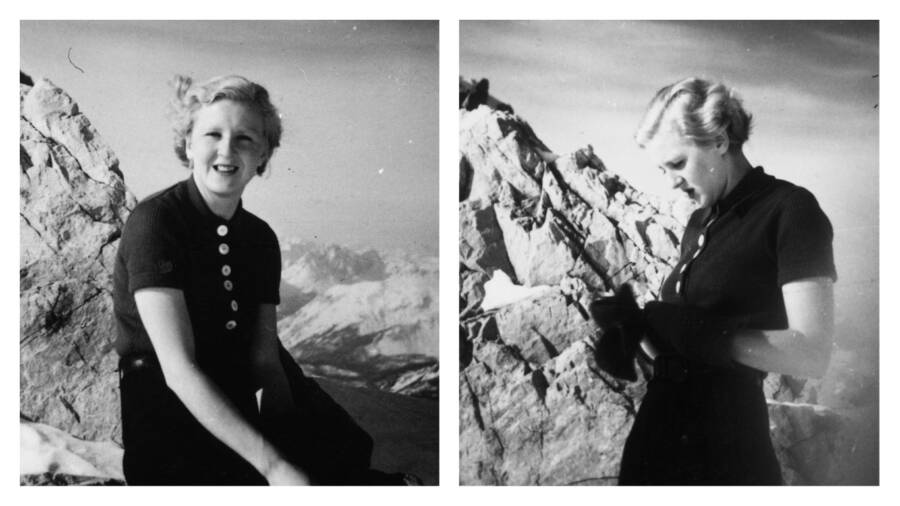 In 1935, Eva Braun wrote in her diary, “The weather is gorgeous, and I, the mistress of Germany’s and the world’s greatest man, have to sit at home and look at it through the window.”

Braun was a 23-year-old photography assistant with a secret: She was Adolf Hitler’s mistress. Over the next decade, Braun and Hitler had a tumultuous relationship that ultimately ended in their joint suicide.

Hitler likely saw Eva Braun as a reflection on himself. “There are two ways of judging a man’s character,” he apparently told his friend Ernst Hanfstaengl. “By the woman he marries and by the way he dies.” The dictator married Braun and died at her side – but who was Eva Braun?

After World War II, many wrote Braun off as a “dumb blonde” who played only a trivial role in history.

But in many ways, Braun was Hitler’s most loyal follower. “This woman came to me at a time when all others were leaving me,” Hitler told his military assistant. “You can’t believe what this meant to me.”

In 1929, Adolf Hitler walked into the photography studio belonging to Heinrich Hoffman, his personal photographer. Eva Braun, Hoffman’s photo assistant, ran out to buy beer and Bavarian meatloaf for the guest.

When she returned, a 17-year-old Braun spoke her first words to Hitler: “Guten Appetit.” Then she blushed.

Sixteen years later, the two would hide themselves away in a Berlin bunker where they got married — and then commit suicide the day after.

But in 1929, Braun was simply a blonde bombshell who caught the eye of the 40-year-old future Führer. 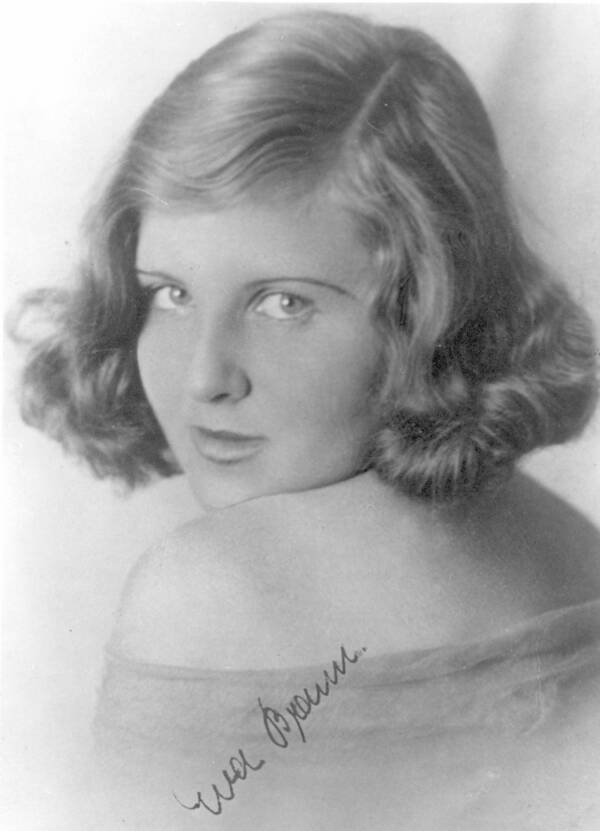 Braun came from a traditional Catholic family. Along with her two sisters, Braun grew up in Munich.

“Eva had pale blonde hair, cut short, blue eyes, and, although she had been educated in a Catholic convent, she had learnt feminine wiles,” Hoffman’s daughter Henriette recalled.

Even Hoffman’s husband, Baldur von Schirach, once called Eva “the most beautiful girl in Munich.”

Hoffman later described the scene as such: “She was just an attractive little thing, in whom, in spite of her inconsequential and feather-brained outlook – or perhaps just because of it – he found the type of relaxation and repose he sought.” 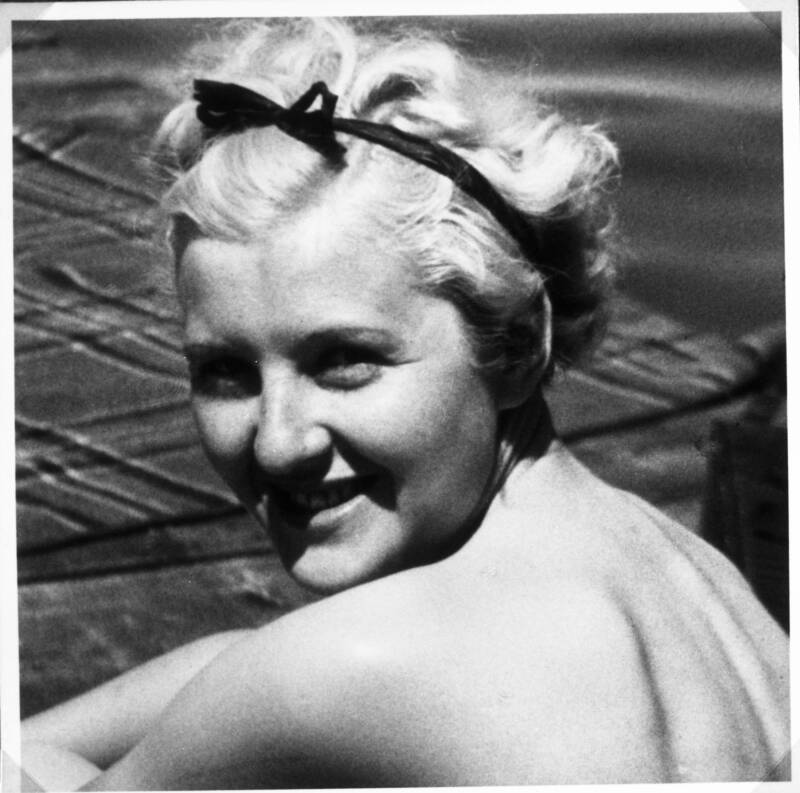 National ArchivesBraun enjoyed traveling with her family, especially in Italy.

At the time, Hoffman predicted Braun would never amount to more than a fling: “Never, in voice, look, or gesture, did [Hitler] behave in any way that suggested any deeper interest in her.”

As he rose to power, Adolf Hitler surrounded himself with women. “Women by the thousand abased themselves at Hitler’s feet,” explained British author David Pryce-Jones. “They tried to kiss his boots, and some of them succeeded, even to the point of swallowing the gravel on which he had trod.”

The Führer himself had strong feelings about romantic entanglements. “A highly intelligent man should always choose a primitive and stupid woman,” Hitler once declared.

For years, Braun was only one of many women Hitler dated.

But Braun wanted more. According to author Alan Bullock, Eva would ultimately become the mastermind in their relationship: “The initiative was all on Eva’s side: She told her friends that Hitler was in love with her and that she would make him marry her.” 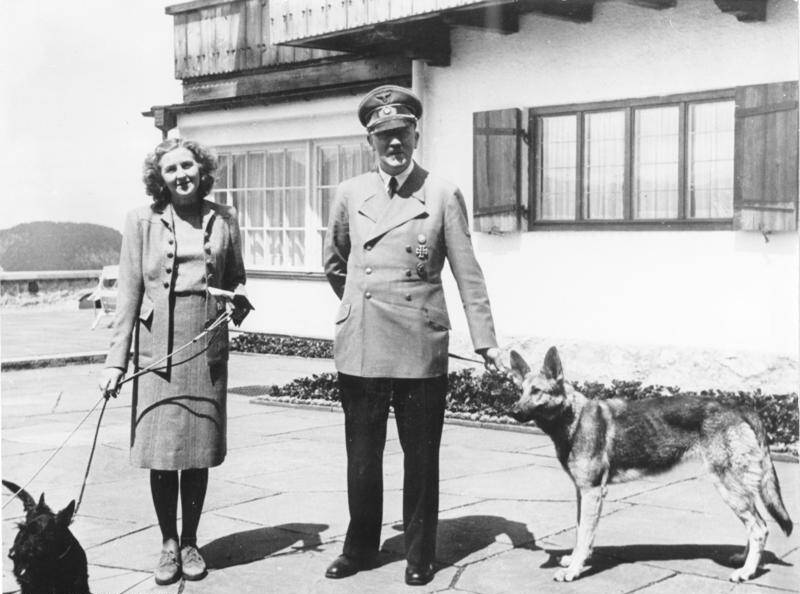 In 1935, Braun was tormented with the news that Hitler had chosen a new mistress. “He now has a substitute for me,” Braun wrote in her diary. “Her name is WALKURE, and she looks it, including her legs. But these are the shapes that appeal to him.”

Braun knew she couldn’t expect monogamy from Hitler. “I would never stand in his way,” she wrote, “if he would discover another romantic. Why should he worry about what happens to me?”

Still, Braun felt ignored by Hitler during their relationship. After her 23rd birthday, she lamented that he didn’t bring her a gift. “So now I bought myself some jewelry,” Braun wrote. “A necklace, earrings, and a ring to match for fifty marks… I hope he likes it. If not he may buy me something himself.”

Hitler was intensely private about his romantic relationships. He apparently destroyed every letter from Eva Braun and all of his other mistresses. He also refused to marry until the day before his death.

Instead, Hitler promoted the myth that he was married to his work, devoting his life to Germany. A family would be a distraction, Hitler concluded. 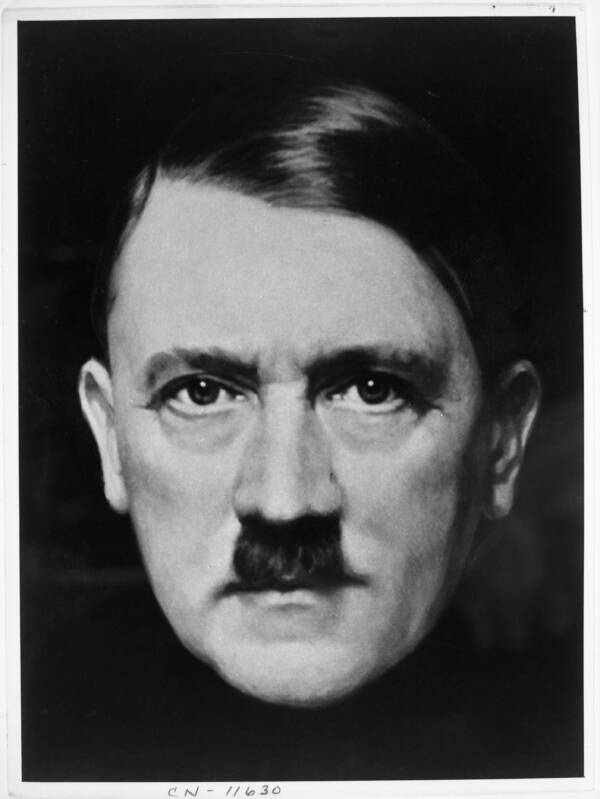 Even acknowledging a mistress would destroy Hitler’s image. “The existence of a mistress did not fit into the successfully cultivated ‘myth’ of the lonesome, godlike ‘führer’ who sacrificed his personal life for the cause of the German people,” explains German historian Heike B. Görtemaker.

“The bad side of marriage is that it creates rights,” Hitler once proclaimed. “In that case it’s far better to have a mistress. The burden is lightened, and everything is placed on the level of a gift.”

As a result, throughout the 1930s, Hitler kept Braun at arm’s length.

On one visit to Braun in February 1935, Hitler apparently suggested he would buy his mistress a house. “I don’t dare think of it,” Braun wrote in her diary. “It would be so wonderful… Dear God, please make it come true within a reasonable period of time.” 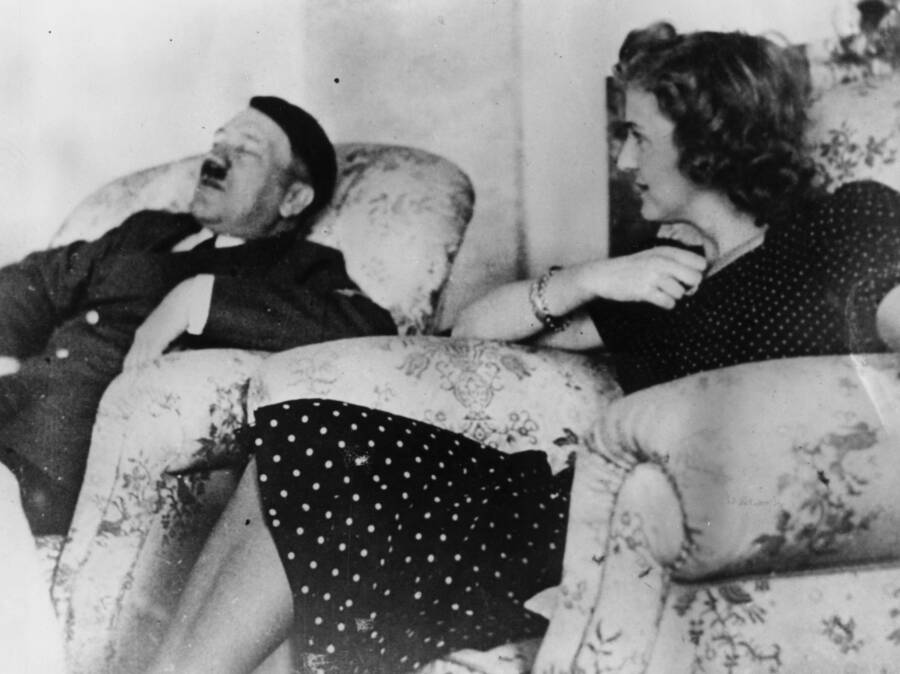 Keystone/Getty ImagesAdolf Hitler takes a nap during World War II, while Eva Braun watches over him.

But just weeks later, Braun had grown despondent. “I wish I had never seen him,” she wrote. “I am desperate. I am now going to buy more sleeping tablets, at least then I’ll be half dazed and won’t think about him so much.”

“When he says he loves me, he takes it about as seriously as his promises which he never keeps,” Braun lamented. “Why does he torture me so much instead of just putting an end to the whole thing?”

On May 28, 1935, Eva Braun waited for Hitler to respond to her most recent letter. “If I don’t get an answer by ten tonight,” she wrote, “I’ll take my twenty-five pills and lie down peacefully.”

“Dear God, please make it possible that I speak to him today; tomorrow will be too late,” Braun penned. “I have decided on thirty-five pills so as to make death certain this time.”

It wasn’t the first time Braun attempted suicide. In 1932, she tried to end her life with her father’s pistol.

But Braun’s attempt in 1935 was different. Hitler was in the midst of a political battle that could cost him his chancellorship. Just a few years earlier, it was reported that Hitler’s half-niece and lover Geli Raubal shot herself in his apartment. Another scandal could end Hitler’s career. 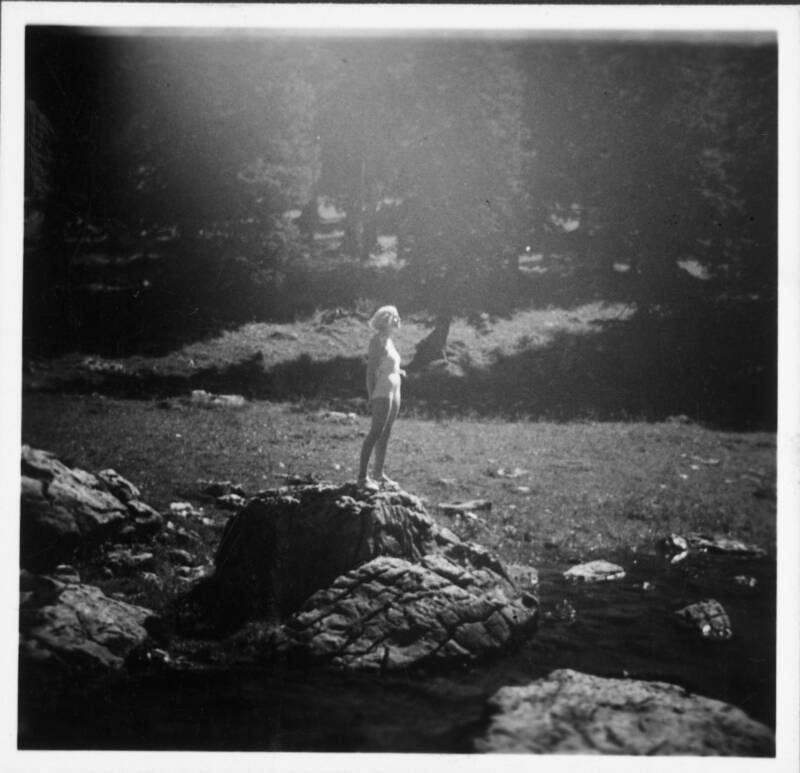 National ArchivesBraun standing in the sunlight in a photo from her private album.

Hitler’s secretary Christa Schroeder saw Braun’s suicide attempt as a ploy: “She pursued him cunningly with suicide attempts. And of course she succeeded, because as a politician Hitler couldn’t have survived a second suicide from someone close to him.”

After the suicide attempt, Braun and Hitler grew closer. She moved into the guest room at one of Hitler’s properties, and during the war she began living at the Berghof Chalet in the Bavarian Alps.

Although she was Hitler’s mistress for over a decade, Braun never joined the Nazi Party. But she supported Hitler’s policies and became one of the most important figures in the dictator’s inner circle. 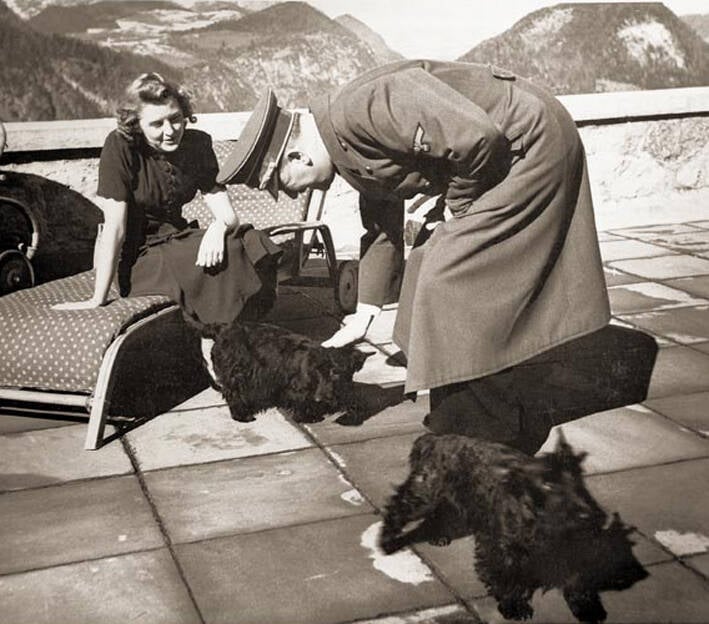 Bettmann/Getty ImagesBraun and Hitler, relaxed with their dogs in 1942.

In the late 1930s and 1940s, Braun began to control access to Hitler. Nazi leaders like Albert Speer and Joseph Goebbels sought Eva Braun out to strengthen their connection to him.

So Braun was more than just a shallow girl. “Within the hierarchy of Hitler’s inner circle, Eva Braun had a strong position,” argues Görtemaker.

How Eva Braun Ignored The War

During World War II, Braun lived at the Berghof Chalet. She spent her time swimming and skiing. While Hitler was off waging war, Braun spent her time reading cheap novels and endlessly grooming herself — sometimes changing her clothes seven times a day.

But Eva Braun also became a central figure in the Nazi propaganda efforts. 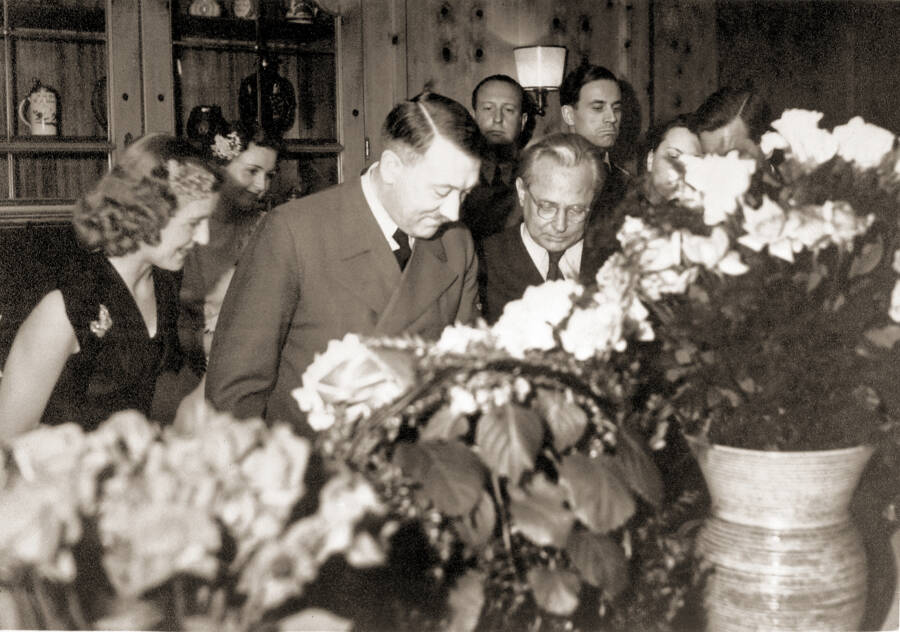 At Berghof, in the privacy of the mountain retreat, Braun played the role of Hitler’s wife without the marriage. To the outside world, her relationship with Hitler remained secret. Photographs of Braun were stamped “Publication Forbidden” to make sure their relationship remained private.

Yet behind the scenes, Braun became the Third Reich’s public relations expert. She filmed Hitler at Berghof, portraying the Führer as a caring leader who loved children. She snapped pictures of the dictator and sold them to Heinrich Hoffman, becoming a wealthy woman during these years. 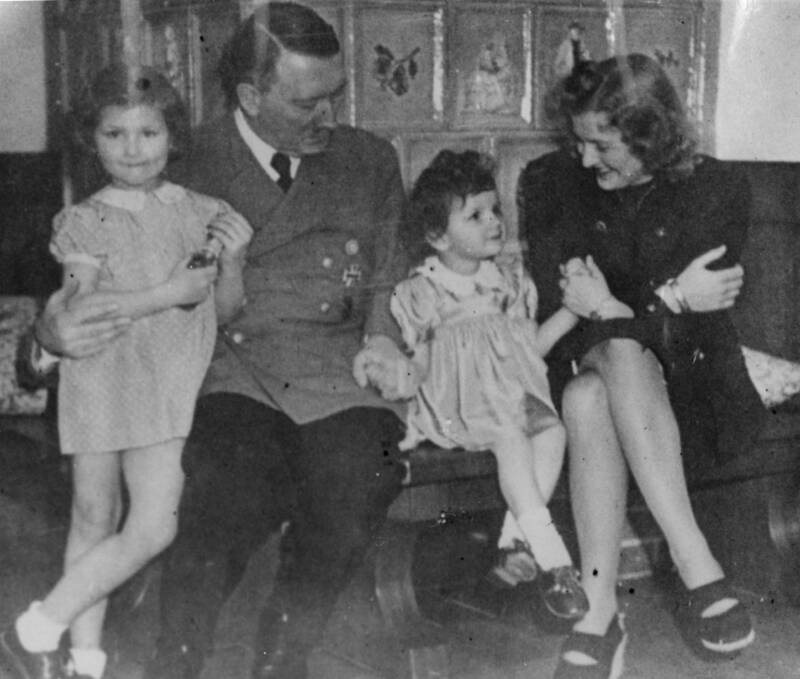 Eva draped herself in diamond jewelry and sat next to Hitler during meals. But still Hitler refused to marry her. Speer described her as an “unhappy woman, who was so deeply attached to Hitler.”

The Day After They Married, Braun And Hitler Commit Suicide

Their wedding took place in an underground bunker with a handful of Nazi loyalists. After the ceremony, the newlyweds toasted with champagne. Then Hitler left their wedding breakfast to write his last will and testament. 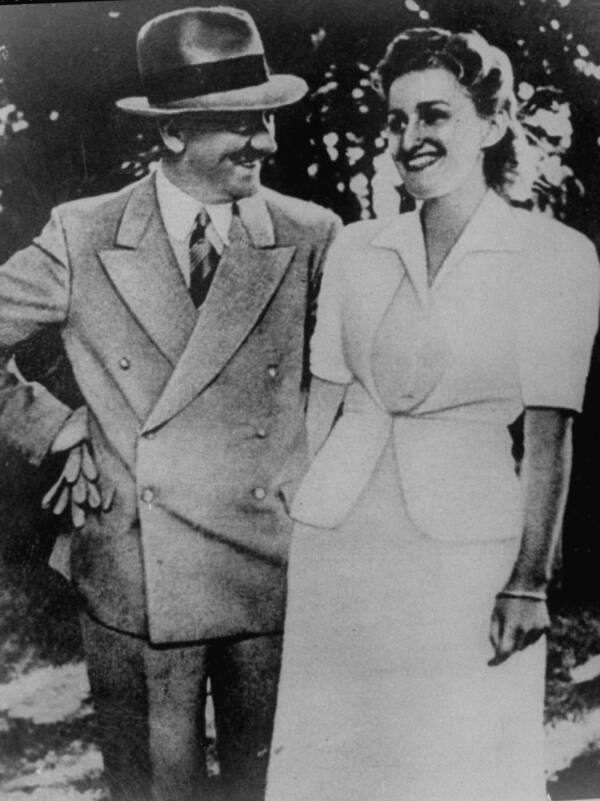 Hitler’s war was ending – and he had lost. To avoid the shame of capture, Hitler resolved to commit suicide. Eva Braun agreed to die with him.

Hitler decided to shoot himself. Braun, always conscious of her image, chose poison. Before offering a cyanide pill to his bride, Hitler fed one to his dog, Blondi, to make sure it would work.

On April 30, 1945, the newlyweds dined on spaghetti with tomato sauce. But Braun barely ate. Instead, she changed into “the Führer’s favorite dress, the black one with the roses at the neckline.” Then, the couple locked themselves into a private room.

A shot sounded. Hitler’s bodyguard, Rochus Misch, opened the door to find Hitler dead. “And I saw Eva with her knees drawn up lying next to him on the sofa,” he remembered.

Braun collected shoes and drank champagne during Germany’s war years. She changed outfits multiple times a day while waiting for Hitler to call. Braun’s cousin described her as “the unhappiest woman I ever met.” 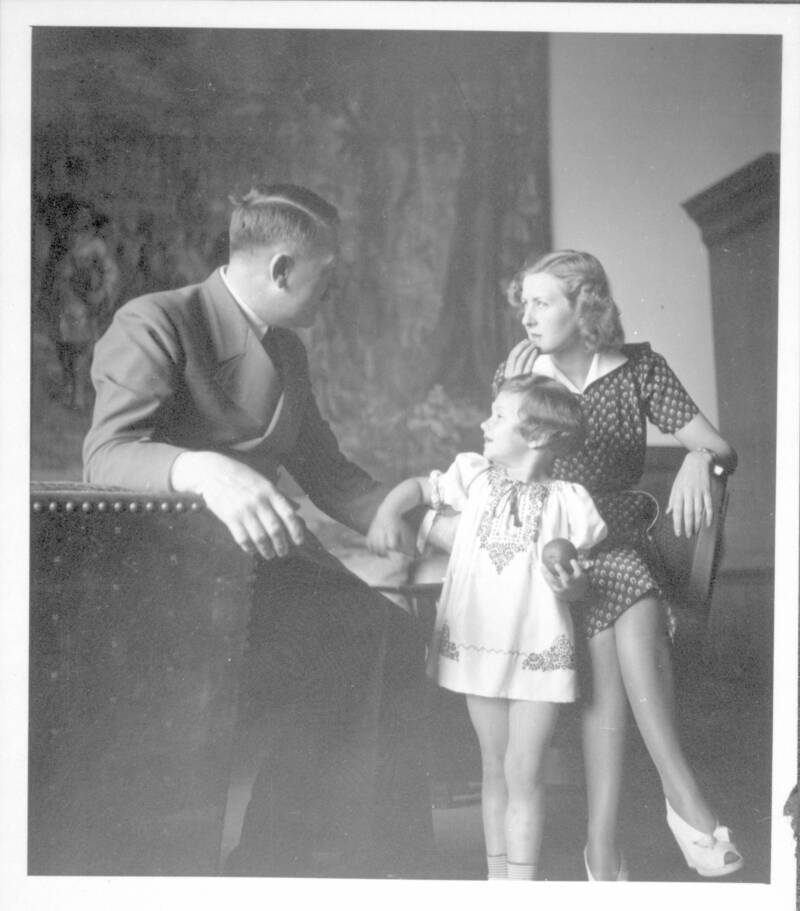 National ArchivesIn 1942, Hitler and Braun escaped the war at Berghof, relaxing with the daughter of one of Eva Braun’s friends.

To Braun, Hitler was Germany’s savior. But she apparently didn’t worry about his methods. Cloistered away at Berghof, Braun played the role of First Lady of the Third Reich, without a second thought for Hitler’s genocidal mania.

Was Braun a villain or a victim? It’s easy to see her as both. Yet her complicit agreement with the Nazi regime and her devotion to Hitler push Braun firmly into the villain category. As Albert Speer memorialized Braun: “Eva’s love for [Hitler], her loyalty, were absolute – as she proved unmistakably at the end.”

For more on Eva Braun’s world, read about the rumor of Hitler’s secret child and then check out photographs of Hitler’s underground bunker.