Inside The Bizarre True Story Of Oregon’s Exploding Whale

In November 1970, the town of Florence, Oregon decided to blow up an 8-ton whale carcass that had washed up on the beach. The results were truly explosive. 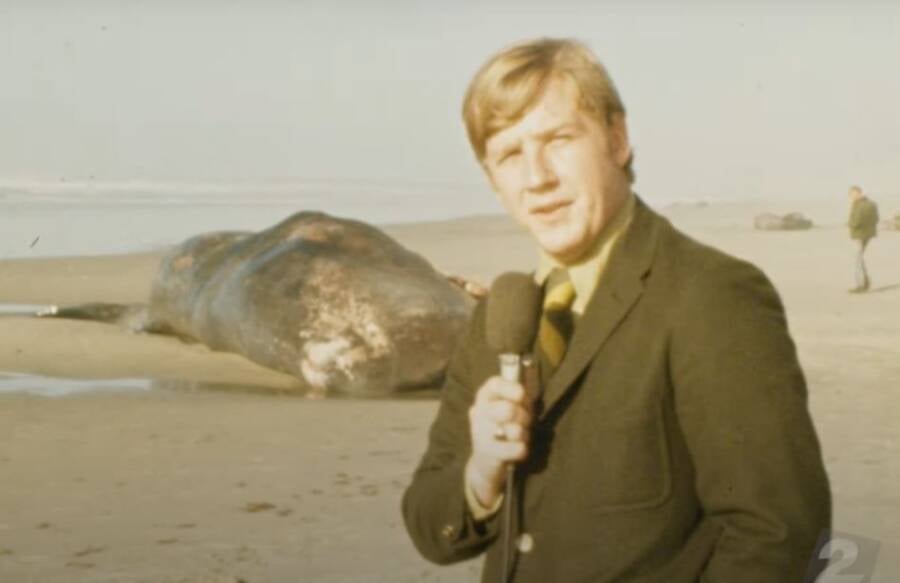 KATU/YouTubeReporter Paul Linnman stands in front of the carcass that’s about to be detonated in Oregon’s infamous exploding whale incident of 1970.

On November 12, 1970, residents of the small town of Florence, Oregon witnessed a rare sight as an exploding whale sent chunks of meat and blubber soaring 100 feet into the sky.

The 45-foot-long, eight-ton sperm whale carcass had washed up on the beach days earlier, and Oregon’s Department of Transportation had been tasked with cleaning up the foul-smelling behemoth. Officials feared people might start climbing it and could even fall into the whale’s carcass.

So, Assistant District Highway Engineer George Thornton made a historic call. His team would treat the whale like a boulder — and blow it up.

Luckily, the event was recorded in a TV segment so bizarre that in recent years it’s been called a hoax. But the people who were there know that the dead whale exploding was all too real — and it sent gigantic chunks of whale flesh hailing down on them and their cars alike.

Believe it or not, this all really happened. Here’s how.

The Exploding Whale Of 1970

Paul Linnman reporting for KATU on the 1970 Oregon whale explosion.

The giant stinking carcass on the Florence beach put Oregon authorities in a bizarre pickle. They feared burying the whale would be useless, as its rotting flesh and stench would be exposed soon after. Though it would have been possible to cut the carcass into pieces after relieving methane pressure with incisions, nobody was eager to do so.

So George Thornton proposed blowing up the carcass with a half a ton of dynamite. Thornton made sure to consult munitions experts from the U.S. Navy before forging ahead with his proposed solution.

After all, these were serious explosives used dangerously close to bystanders. Since Oregon beaches were under the DOT’s jurisdiction at the time, it was his call.

Technically, their preparations made sense. They gathered the right amount of explosives, and positioned them on the land side of the giant creature, hoping to blow the exploding dead whale outward into the ocean. 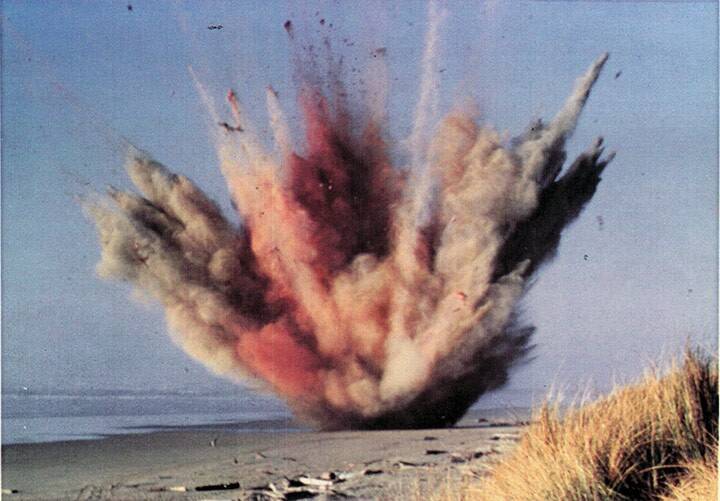 KATU/YouTubeHalf a ton of dynamite was used in the infamous exploding whale incident.

After detonation, they figured that seagulls and other scavengers would eat up any whale meat that wasn’t washed away by the tide. Thornton even ensured all onlookers were a quarter-mile away from the carcass — but had no idea how far whale chunks would fly following his signal.

On the other hand, reporter Paul Linnman was less thrilled when he got the assignment to cover the exploding whale. Frustrated at being handed this seemingly novice story, he initially rejected the task — then he found out half a ton of dynamite was involved.

“I was getting good assignments and so when they asked me to go to Florence to cover the disposal of a whale, I went, ‘whoa, wait a minute — I’m boy wonder here. I do bigger stories. Send somebody else,'” Linnman recalled. “Then they said they were going to use dynamite and I said, ‘Ok, let’s go.'”

“The blast blasted blubber beyond all believable bounds,” Linnman reported.

Blowing Up A Whale

Kelly Umenhofer was 14 years old at the time and remembers the day of the exploding whale incident vividly. He recalled overhearing the officials preparing the whale for demolition and running back to his father to share the news. 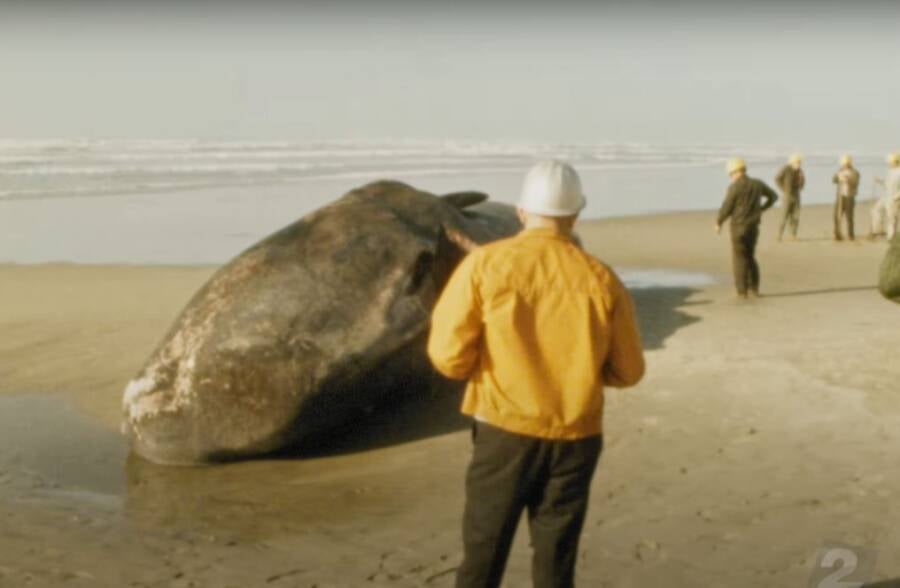 KATU/YouTubeAssistant District Highway Engineer George Thornton (pictured) was aggravated about the incident until his death in 2013.

Fortunately, no one was hurt by the explosion or the subsequent, unexpected debris. For those who were there, it was a surreal sight to behold.

“After they blew it up, everyone is watching in awe, and then 30 seconds later — blam blam blam — then everyone’s going, ‘There’s huge chunks of whale blubber getting thrown on us,'” said Umenhofer.

Those chunks weren’t as bite-sized as officials expected. Instead of bits fit for seagulls, chunks of whale flesh rained down, with at least one hefty enough to crush a car. 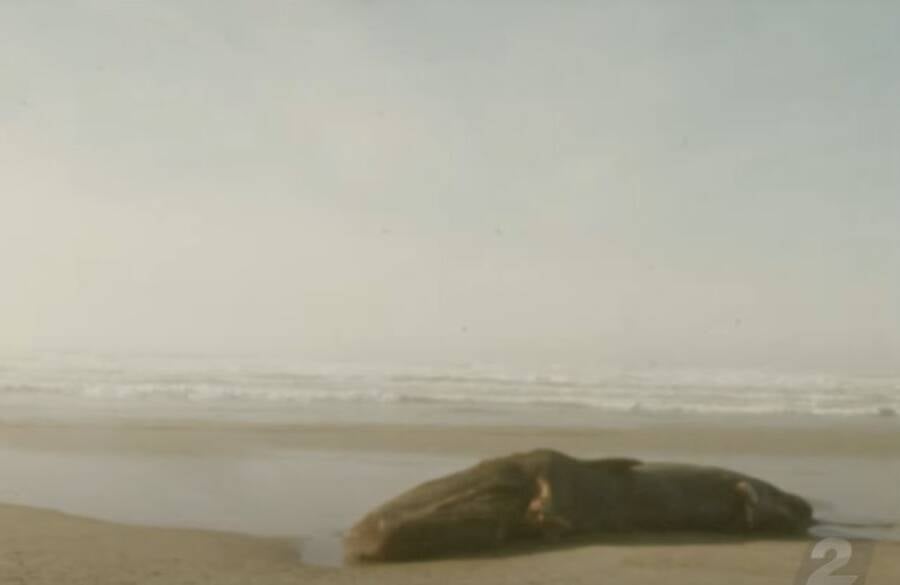 “The beach erupted in a 100-foot-high column of sand and whale,” reported Larry Bacon for The Register-Guard. “Chunks of the animal flew in every direction, and spectators began to scream and run for cover when they glimpsed large pieces soaring directly overhead.”

Unfortunately for Umenhofer, the one car destroyed in the aftermath of the exploding whale belonged to his father.

“As it started to come down, it went boom!” Umenhofer remembered. “It almost bent the car in a V, and my dad goes, ‘My car!’ My dad bought it from Old’s Dunham Cadillac, and their slogan at the time was come on in — and we’ll give you a whale of a deal.”

Fortunately for Umenhofer Sr., the State of Oregon footed the bill to replace his car. Ultimately, the disastrous incident was thoroughly educational for those who believed blowing up a whale in public was appropriate. 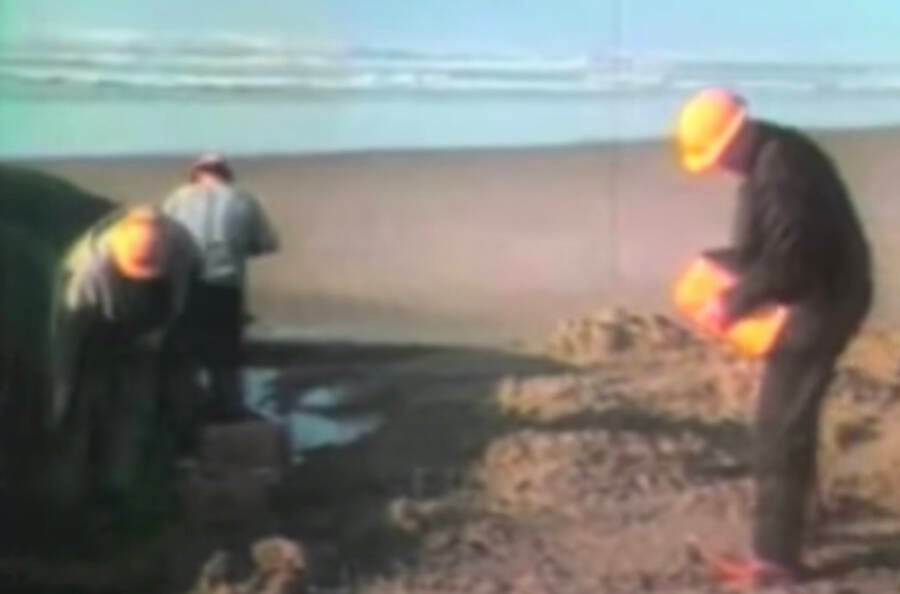 KATU/YouTubeThornton consulted with munitions experts from the U.S. Navy before blowing up a whale.

Memories Of The Dead Whale Exploding

For George Thornton, the exploding whale incident remained a regretful blemish until his death in 2013 at 84 years of age. While he told Linnman on that fateful day in 1970 that he was “confident that it’ll work,” the plan’s failure embarrassed him for the rest of his life. 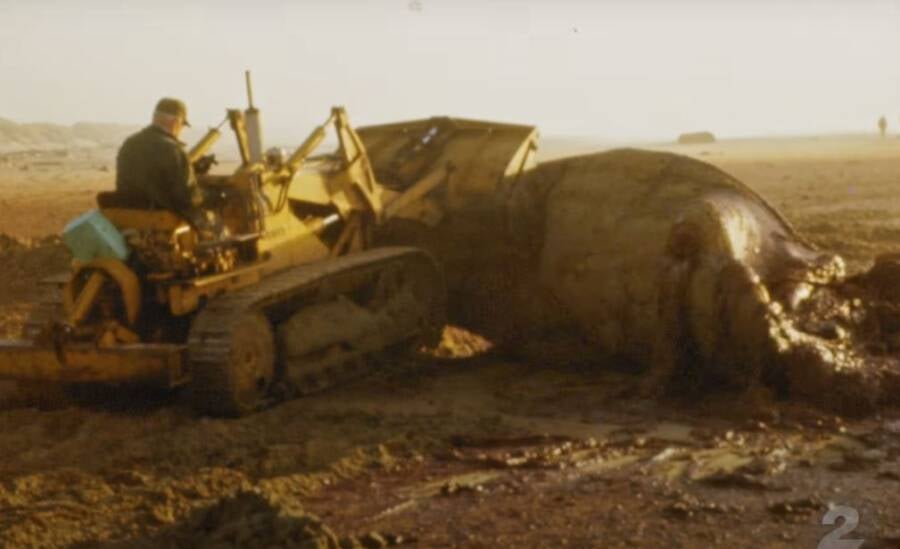 He purportedly refused to talk about it, and once explained that every time he brought it up, “it blew up in my face.” For Linnman, meanwhile, the segment he hesitated to produce became somewhat of a phenomenon. DOT public information officer Ed Shoaps believes Linnman’s footage is historic.

“I consider it the first story to go viral on the internet,” said Shoaps. “The story persists because it is interesting.”

To his point, the exploding whale footage has remained an object of fascination for decades. In the early 1990s, many who first discovered the segment believed it to be recent and angrily called Oregon officials to complain — unaware it was decades old. 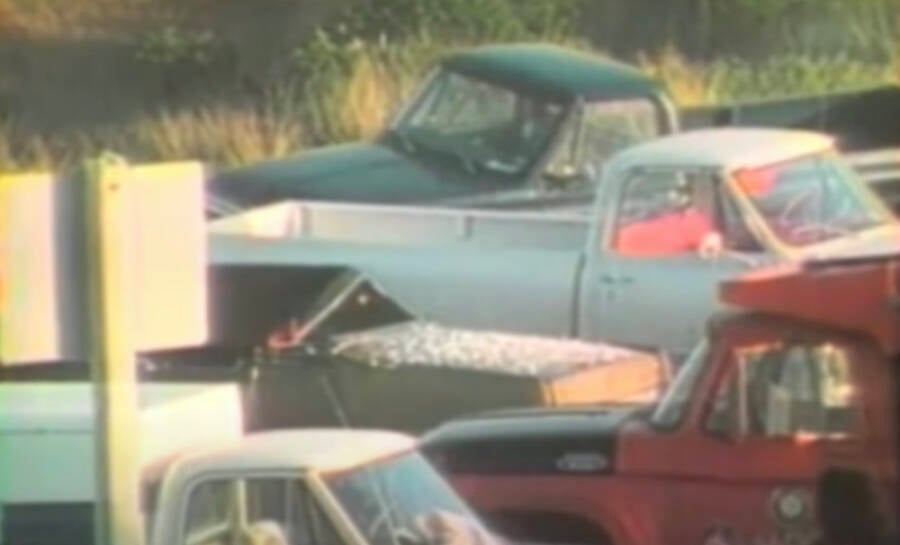 KATU/YouTubeThe one car demolished by blubber that day was purchased from a dealer whose slogan advertised a “whale of a deal.”

Explosions like this continue to this day, though the whales are first towed out to sea. Oregon State, meanwhile, has since implemented a policy to bury carcasses that can’t be easily removed. In July 2020 — half a century after the explosion — Florence residents voted to dedicate a park to the incident.

In a poll to determine the new park’s name, “Exploding Whale Memorial Park” garnered 439 out of 856 votes.

And while guidelines and perspectives have certainly changed over the years, Linnman remembers that day as if it were yesterday. “I can still conjure it up 40 years later,” Linnman said in 2010. “If I think about it, I can still smell that smell.”

After learning about the dead whale exploding on an Oregon beach, read about the 18 weirdest items to ever wash up on the beach. Then, learn about the humpback whale mysteriously discovered in the Amazon jungle.