A TikTok Artist Built A Sarcophagus Meant To Be Opened In 10,000 Years — And Put Flamin’ Hot Cheetos Inside 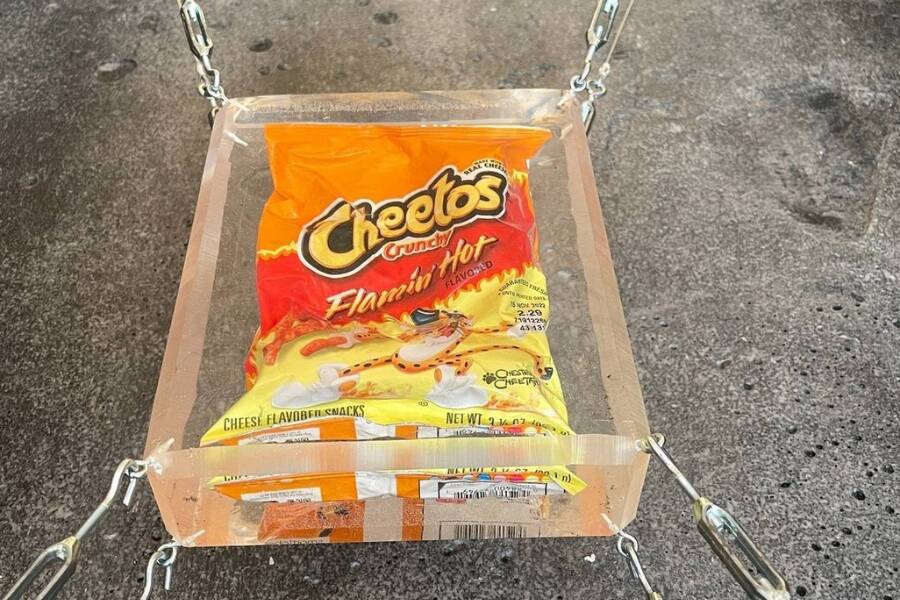 @sunday.nobodyThe snack-sized bag of Cheetos is sealed in resin, suspended in the center of a 3,000-pound sarcophagus, and buried with a marker saying it can’t be opened for 10,000 years.

Approximately 10,000 years ago, life was very different from how it is today. Humans still largely lived in hunter-gatherer tribes, the world had only recently come out of the Ice Age, and wooly mammoths still roamed the earth. Much of what we know of our prehistoric ancestors comes from DNA evidence and archaeological discoveries.

Modern humans, by contrast, have numerous ways to leave their historical mark on the world. We have written records of events, photographs, audio recordings, and films that can paint a very clear picture of what life is like. The biggest question now is, what will we leave behind for the humans of 10,000 years from now?

Well, according to a TikTok user by the name “sunday.nobody,” the answer is a sealed bag of Flamin’ Hot Cheetos.

According to Insider, the 28-year-old creator from Seattle has spent the past four months constructing an elaborate, 3,000-pound concrete sarcophagus, inside which there is only a single resin-sealed bag of Flamin’ Hot Cheetos.

“Twenty-one hundred pounds of concrete and a bunch of random bruises later,” he said, the process was complete. It took a month just for the sarcophagus to dry inside its molding before he was finally able to move on to the next step.

The next step, evidently, involved using his car to flip over the 900-pound headstone so that he could emboss the ingredients for Flamin’ Hot Cheetos on it in gold leaf. 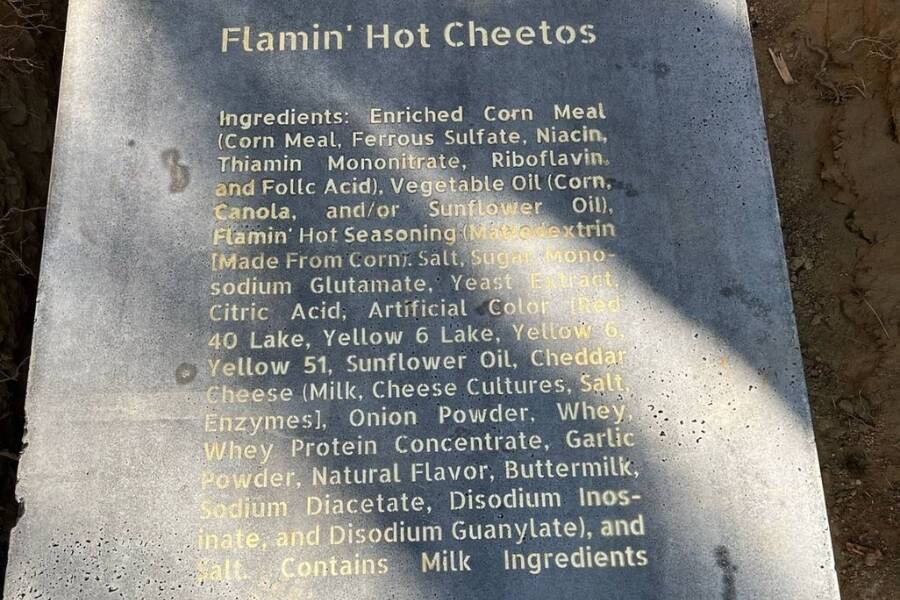 @sunday.nobodyAll the ingredients for Flamin’ Hot Cheetos, etched into the sarcophagus’ headstone.

He shared a short video of the process on TikTok, where it has garnered more than 12 million views.

The artist told Insider that for the past two years, he had been setting aside money from his day job as an animator to put into a savings account. But simply setting the money aside, he said, wasn’t making him happy.

Instead, he put that money into different tools and art supplies, “because there’s nothing else I’d really want to spend my money on. I don’t want clothes or a car or any of that stuff.”

As an artist, Sunday.nobody — who has asked media outlets not to use his real name — is fully aware that his projects aren’t necessarily sellable, and he prefers it that way.

Speaking with Rolling Stone, he said, “I try to keep my audience really small.” He embarks on projects that his friends would find funny, and then just does “the stuff that would make them laugh.”

“I have a Google Doc that’s really long, hundreds of little notes,” he said. “As soon as I think of a dumb idea, no matter how dumb it is, I force myself to write it down.” 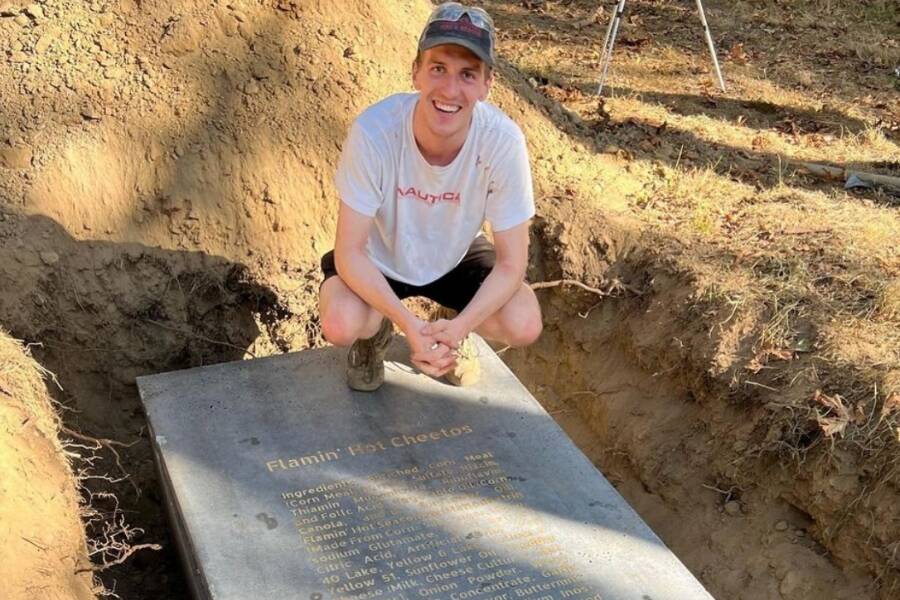 @sunday.nobody/Instagram@sunday.nobody is a “meme artist” whose previous projects include a “21st-century religious text” that is just a transcript of the film Shrek written by a robot.

“I kinda cheat a little bit by using the meme significance and ‘millennial’ significance of these objects,” Sunday.nobody said. “It allows people to connect with it, having a preexisting connection to these things.”

Sunday.nobody told Rolling Stone that he’s never done a sponsored post of any kind — and shunned the idea of trying to sell to people. But while the Cheetos burial was not in any way sponsored by Frito-Lay, a representative from Frito-Lay did however call the project “an honorable mission to preserve Flamin’ Hot Cheetos for future generations,” adding, “we are here for it.”

Sunday.nobody didn’t need a corporate sponsor for the project, anyway. He had a small team of friends help him with the construction and burial — and the land was provided by a couple who responded to his call on Instagram asking for a space to bury something that was “not a body.”

Even with the help, it took several hours of digging and the assistance of a tractor to dig a hole deep enough for the massive sarcophagus.

Once it was in the ground and covered in dirt, Sunday.nobody and his friends left a marker on top of the patch of land that reads, “Historical artifact buried below. Do not open for 10,000 years. Year buried 2022.”

Naturally, followers on TikTok have threatened to find the buried bag of Cheetos and unearth it, to which Sunday.nobody responded, “You’ve seen Pirates of the Caribbean? There’s a curse on those Cheetos, like the one on that pirate gold.”

Of course, much of the humor from Sunday.nobody’s project stems from the sheer ludicrousness of it. Flamin’ Hot Cheetos aren’t exactly hard to come by, but there isn’t necessarily a way to guarantee that they’ll be widely available in another 10,000 years. 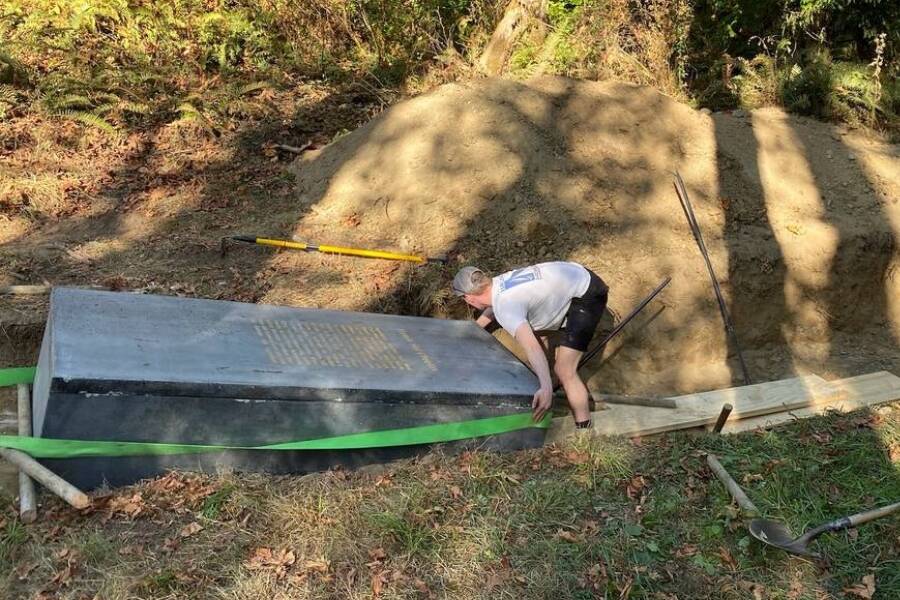 By that point, we really can’t even guarantee that humans will be the predominant species on Earth. What will future civilizations think when they unearth an egregiously sealed bag of cheesy snacks?

Were Flamin’ Hot Cheetos an important item to the humans of 2022? Were they worshiped as a religious icon? Did they lead to the end of society?

It is, in a way, similar to Douglas Adam’s Hitchhiker’s Guide to the Galaxy, in which it is unveiled that the answer to life, the universe, and everything is simply “42.” Millennia of waiting for such a disappointing answer is, in an ironic sense, funny.

Ultimately, the project has no real purpose, Sunday.nobody said, but “a project without a purpose or a point somehow has the most purity.”

After reading about this strange art piece, learn about the artist who sold an invisible sculpture in an attempt to “redefine” art. Then, see what was inside the 1993 time capsule that college students in Seattle opened.