The "Swamp Sasquatch" known as the Florida Skunk Ape is a 6'6", 450-pound hairy, smelly ape that roams the Everglades — or so believers say.

Three days before Christmas in the year 2000, a family in Florida awoke to a loud noise on their back deck. There was so much banging and pounding that it sounded like some overweight drunk was knocking over deck chairs, but with all that noise came something that couldn’t possibly be human: a low, deep grunting, and with it, a stench like something was rotting.

When they came out to the back window, they saw something they never expected to see. There on their deck was a great, huge, lumbering beast, covered in hair from head to toe. 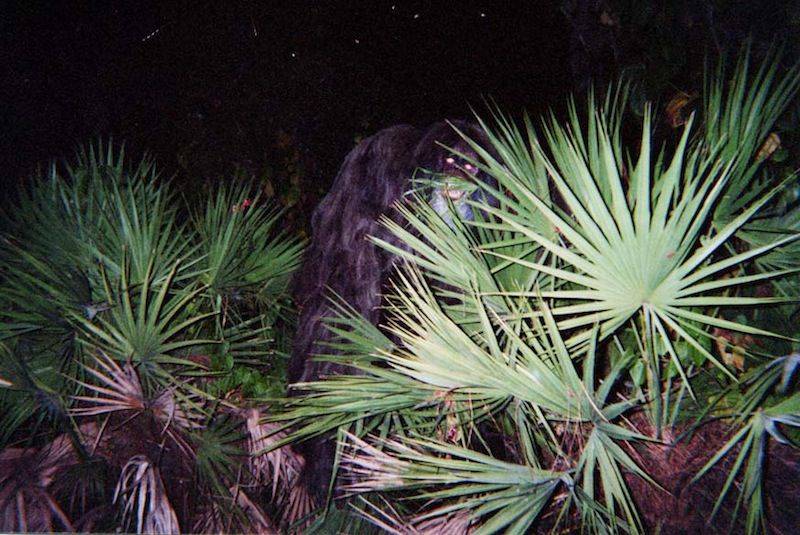 The family figured it was an escaped orangutan on the lam from the local zoo. But when the photo they took started making its rounds online, a handful of true believers in the paranormal had a different explanation altogether.

The monster on their deck, they believed, was none other than Florida’s own Bigfoot: the Skunk Ape. 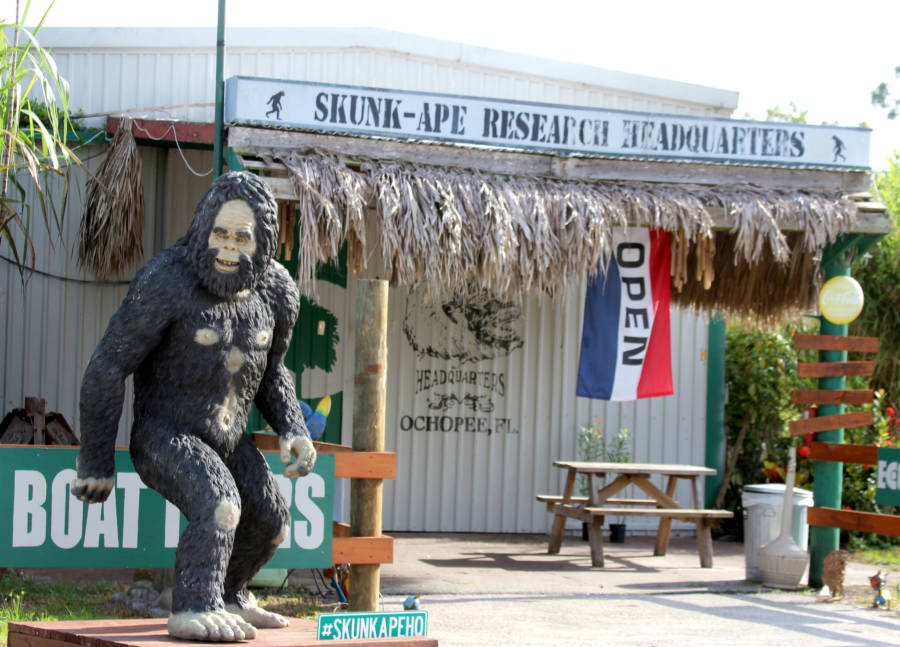 For at least one man, hunting down the Skunk Ape is a full-time job: Dave Shealy, the self-proclaimed “Jane Goodall of Skunk Apes.”

Shealy runs Skunk Ape Headquarters, a research facility focused on proving that these creatures are real. He says that he’s poured his life into proving that they exist ever since he spotted his first one at the tender age of ten:

“It was walking across the swamp, and my brother spotted it first. But I couldn’t see it over the grass—I wasn’t tall enough. My brother picked me up, and I saw it, about 100 yards away. We were just kids, but we’d heard about it, and knew for sure what we were looking at. It looked like a man, but completely covered with hair.”

In essence, the Skunk Ape isn’t too different from Bigfoot, other than a few unique charms. They roam exclusively through Florida’s Everglade forests, often in whole packs, and they’re said to be peaceful and kind.

What really sets them apart, though, is the smell – a stench Shealy describes as “kind of like a wet dog and a skunk mixed together.”

The earliest well-known Skunk Ape sighting happened in 1957 when a pair of hunters claimed that a gigantic, smelly ape invaded their camp in the Everglades. Their story picked up traction and, as it spread, the creature started to pick up its own unique name, inspired by its distinct smell.

Dozens of sightings followed. In 1973, a family claimed they saw a Skunk Ape chase their child off a tricycle. The next year, another family claimed that they hit one with their car – and they had hairs in the fender to prove it.

A whole tour bus full of people claimed they saw a Swamp Sasquatch in 1997. They described it as “a seven-foot, red-haired ape” running through the Everglades. There were 30 or 40 people in all, every one of them telling the same story.

And that same year, a woman saw a Skunk Ape jump in front of their car. “It was shaggy-looking and very tall, maybe six-and-a-half or seven feet tall,” she says. “The thing just jumped in front of my car.”

A Native Tradition In Florida 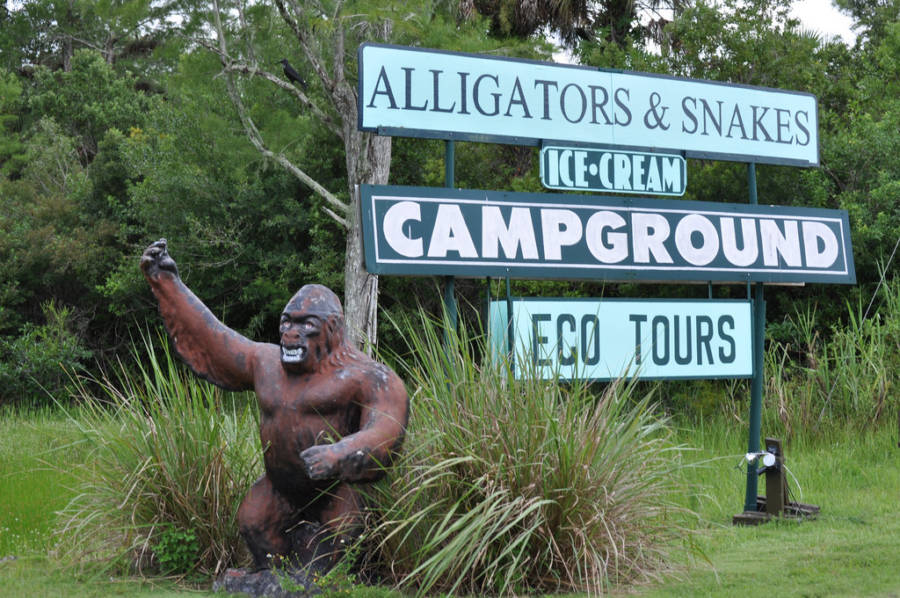 Lonny Paul/FlickrA statue of the Skunk Ape outside of an Everglades campground.

The stories of the Skunk Ape go back much further than the 20th century. The Muscogee and Seminole tribes that lived in the Everglade forest before European settlers arrived claim they’ve been seeing Skunk Apes in the woods for hundreds of years.

They called it “esti capcaki“, or the “tall man.” He is the protector of the woods, they say, and he keeps away those who would damage the forests. Even when you don’t see the Florida Skunk Ape, they believe, he watches you, forever vigilantly gazing over those who enter his domain and using his mystic powers to vanish into thin air.

The photograph taken by that family that supposedly saw a Swamp Sasquatch on their back deck in 2000 is by far the best-known image of the creature. But it’s far from the only one.

There are countless photos and videos allegedly depicting Skunk Apes on the internet, including one taken by Dave Shealy himself. Shealy, in fact, has a whole facility full of Skunk Ape evidence, including a cast of a four-toe footprint from the creature, which he claims was left right next to his hunting camp.

Footage allegedly depicting the Florida Skunk Ape that was recorded by Dave Shealy in 2000.

His video, though, is his ultimate proof. He filmed it in the year 2000 and claims that it shows the Skunk Ape wandering through the swamp, moving at speeds that would be impossible for any human being to achieve. 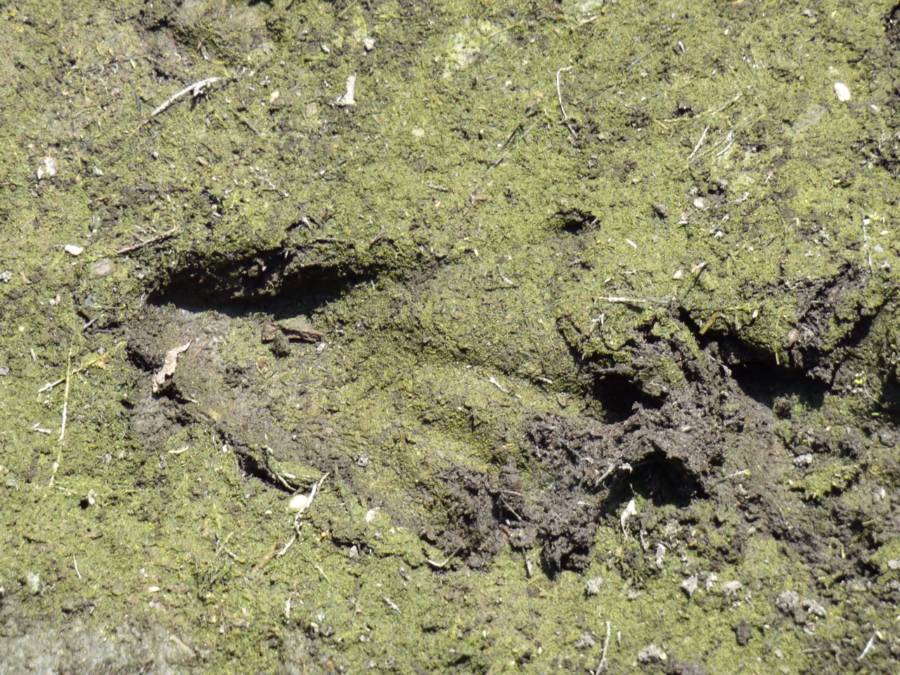 As far as Shealy’s concerned, his video proves the existence of the Skunk Ape beyond a shadow of a doubt. But it hasn’t fully convinced everybody. The Smithsonian, after seeing the video, said: “It’s extremely hard to watch this video and see anything but a guy in a gorilla suit.”

Still, for Shealy and the faithful, there’s no question that the Skunk Ape is real.

For most of the scientific community, however, there a few questions. The National Park Service has called Shealy’s Skunk Ape evidence “extremely weak,” while the Committee for Skeptical Inquiry has said: “It’s almost entirely eyewitness testimony, which is the most unreliable evidence you can have.”

Dave Shealy: The Center Of A Legend 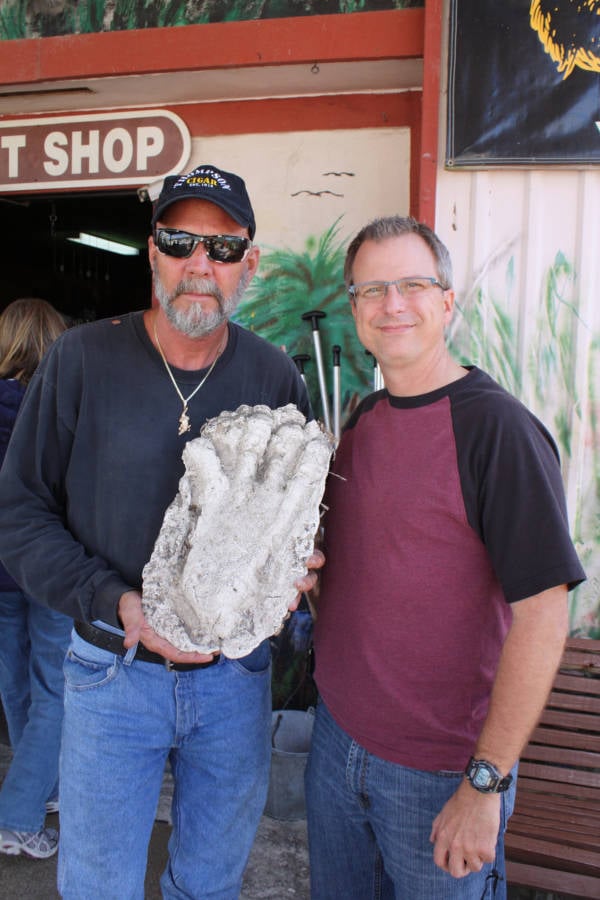 Shealy himself, though, doesn’t quite fit the bill of your usual conspiracy theorists. He openly jokes about some of the people who come to see him and the things they believe, like the belief that only those who have been abducted by aliens can see Sasquatch.

Nevertheless, Shealy does seem to be at the center of the whole Skunk Ape story. Several Skunk Ape hunters have cited him as a direct influence, and while some Native American tribes have claimed that the Skunk Ape is part of an older tradition, their stories are quite a bit different from the modern stories of big, smelly apes terrorizing people’s backyards.

So why is Shealy so obsessed with the Florida Skunk Ape? We may never know for sure, but perhaps he genuinely and truly believes that Skunk Apes are real, or perhaps – as many of the people who’ve interviewed him have very strongly implied – he’s just out to sell a few trinkets at his gift shop.

More than a few things Shealy has said seem to support the idea that he’s just having a laugh. When Atlas Obscura asked why he spent so much time looking for Skunk Apes, Shealy told them:

But in the end, it’s a matter faith. We’ll leave it to you to decide whether the whole thing’s a mass delusion, spurred on by one man out for a laugh, or whether there really are six-and-a-half-foot tall apes wandering through Florida, just waiting to be discovered.

After this look at the Florida Skunk Ape, learn more about the legendary Bigfoot and the other cryptids some insist roam the wilderness.