The frilled shark lives between 390 and 4,200 feet below the surface, making live specimens extremely rare to catch. 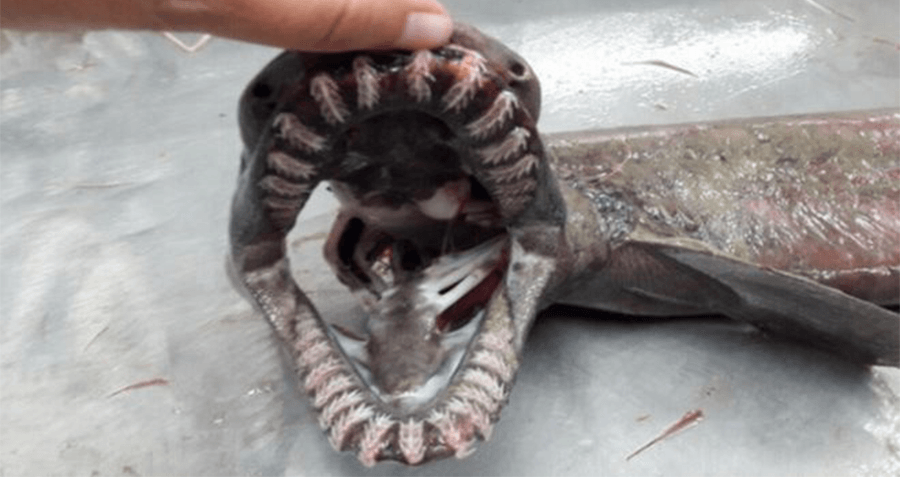 Researchers aboard a Portuguese trawler off the Algarve coast have caught a rare frilled shark, which scientists have dubbed a “living fossil.”

According to SIC Notícias, the researchers were working on a European Union project to “minimise unwanted catches in commercial fishing,” when the five-foot-long snake-like fish found its way into their nets.

The catch was a surprise for more than one reason.

The frilled shark, which scientists called a “living fossil,” has been around since the Cretaceous Period, which was around 65.5 million years ago. Even more shocking, they said, was the fact that it hasn’t evolved at all since then.

The fish also lives between 390 and 4,200 feet below the surface, making catching live specimens especially rare. Studies have attributed the lack of evolution to the lack of nutrients in its deep-sea habitat, and the fact that its diet hasn’t changed either. Since its start on earth, the frilled shark has eaten mostly cephalopods.

Frilled sharks have been caught in the past, but this catch marks the first one a live one has been caught in a long time. Most of the specimens don’t last long enough to get to research labs, resulting in little information being known about the species.

The catch is an important one for researchers, as it can help contribute to the limited knowledge they have on the shark.

According to Professor Margarida Castro of the University of the Algarve, the shark gets its name from the frilled arrangement of its teeth. Inside the fish’s mouth are neatly arranged rows of razor sharp teeth, designed to grab and trap squid. According to Mental Floss, the name could also come from the frilled appearance of the sharks gill slits.

The frilled shark is often called the “monster of the deep,” and according to Samuel Garman, the first scientist to study the shark, that’s a good name. It’s believed that the fish’s snake-like appearance and movements are what inspired old sailors’ tales of sea monsters.