Who Was George Lincoln Rockwell, The Founder Of The American Nazi Party?

The story of George Lincoln Rockwell, the man whose legacy of hate lives on to this day. 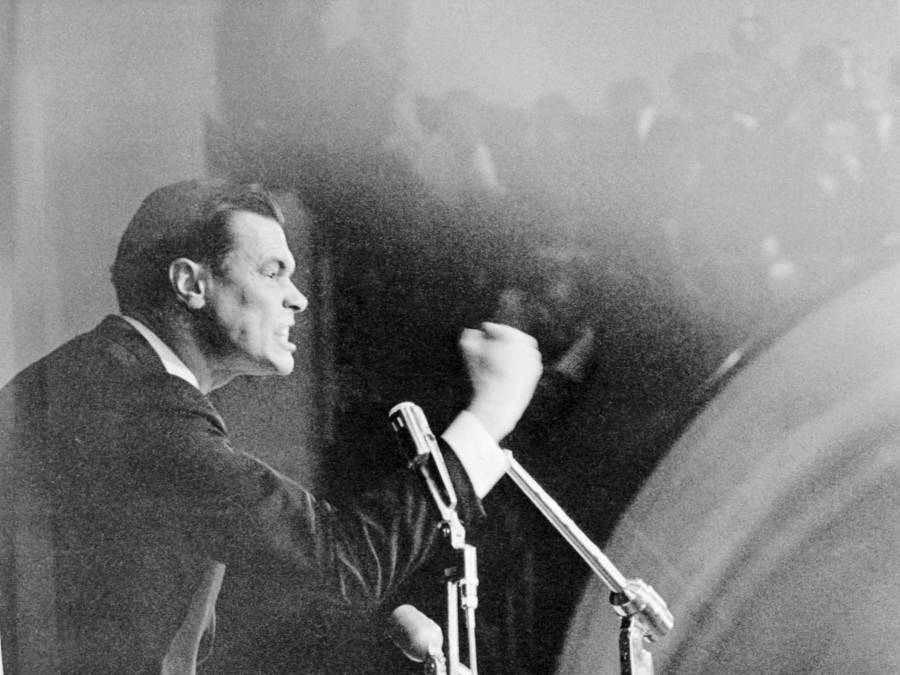 Bettmann / Contributor via Getty ImagesGeorge Lincoln Rockwell, leader of the American Nazi Party, shakes his fist during his speech at Drake University on February 13, 1967.

When future American Nazi Party founder George Lincoln Rockwell first heard that Senator Joseph McCarthy was embarking upon a witch hunt to ferret out suspected communism and homosexuality in the U.S. government during the 1950s “Red Scare,” he reacted differently than most.

“I began to pay attention, in my spare time, to what it was all about,” Rockwell later wrote in his 1961 book, This Time the World. “I read McCarthy speeches and pamphlets and found them factual, instead of the wild nonsense which the papers charged was his stock-in-trade. I became aware of a terrific slant in all the papers against Joe McCarthy, although I still couldn’t imagine why.”

McCarthy wasn’t the only 20th century demagogue under whose spell Rockwell would fall.

Little in George Lincoln Rockwell’s upbringing suggested that he’d fall for the teachings of Adolf Hitler and ultimately go on to found the American Nazi Party. His parents both worked as old-time vaudeville comics, and his father’s show business acquaintances included Fred Allen, Benny Goodman, Walter Winchell, Jack Benny and even Groucho Marx.

When Rockwell was six, however, his parents divorced and Rockwell split his time between his mother’s home in Atlantic City, New Jersey, and Boothbay Harbor, Maine, where his father lived.

In 1938, Rockwell made it into Brown University, where he began honing the viewpoints that would later inform those of the American Nazi Party. There he also met his first wife, debated his fellow sociology students about how people are not born equal, and drew cartoons for the campus humor magazine, dropping out less than two years later and joining the Navy.

He completed his pilot training in time to serve in World War II. Rockwell never flew in combat, but by the time the war ended, the Navy gave him command over an attack squadron at Pearl Harbor.

After the war ended, he tried his hand at many different careers — from studying art at the Pratt Institute in Brooklyn and winning a prestigious award to working as a freelance photographer — but nothing ever seemed to pan out. 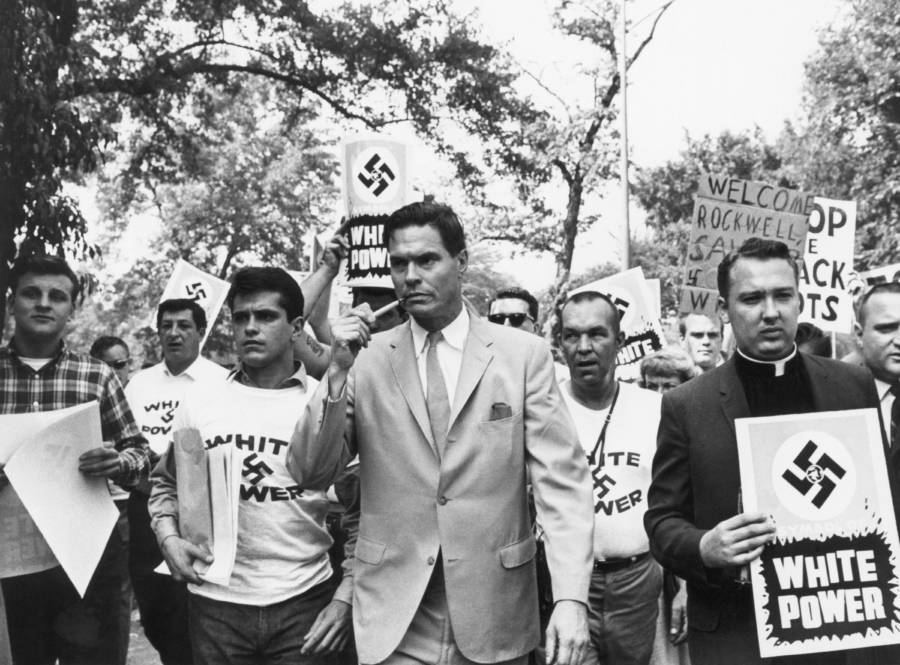 In 1950, when Rockwell was 32 years old, the Navy recalled him to active duty to serve in the Korean War. While he stayed at the naval base in San Diego for the entirety of the war, he did manage to meet a certain couple who gave him an anti-semantic pamphlet.

Rockwell actually first dismissed it as racist trash, but some fascination kept his interest until he read it cover-to-cover and back again.

This proved to be life-changing for Rockwell, and he soon began devouring anti-Semitic hate literature. When he found a copy of Mein Kampf in an old bookstore, the antisemitism and white nationalism that had taken root in his mind began to flourish.

“I was hypnotized, transfixed,” Rockwell told Playboy in 1966. “Within a year, I was an all-out Nazi, worshiping the greatest mind in two thousand years: Adolf Hitler.”

He would soon leave his wife and three daughters behind and move to Iceland for the Navy, which gave him command of a bomber squad in 1952. He remarried an Icelander before the year ended, finished his tour in 1954, and moved to D.C. to start a magazine aimed at United States servicemen’s wives.

It failed. Desperate for money, Rockwell packed his new wife and whatever belongings they had into a car-drawn trailer and hit the road as a traveling salesman. He failed at that, too. But from these failures came something far worse.