Who Was George Lincoln Rockwell, The Founder Of The American Nazi Party? 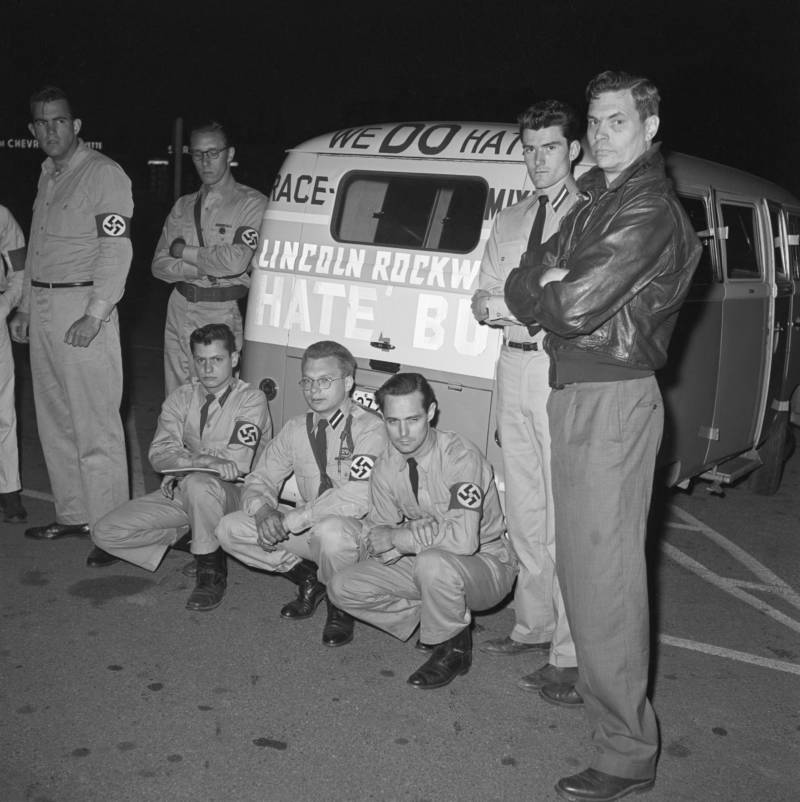 Bettmann / Contributor via Getty ImagesGeorge Lincoln Rockwell (right) and followers pose next to their Hate Bus — a Volkswagen they use to drive around the country and spread their message — in Seven Corners, Virginia, on May 23, 1961.

Between house calls, Rockwell managed to assemble a group of followers that agreed with his philosophy of ridding the country of “reds and blacks.” Armed with the donations given to them by wealthy, anonymous donors, mostly Southerners, the group solidified and formed the American Nazi Party in 1958 with George Lincoln Rockwell at the head as the group’s “Commander.”

Headquarters in place, the group set out to publicize their cause, holding rallies in places like New York City and the National Mall in Washington, D.C., always facing government pushback and sometimes even riots and arrests.

Rockwell drew attention to garner 212 votes as a write-in candidate for president in 1964, while also getting himself on the ballot for the 1965 gubernatorial election in Virginia, where he drew one percent of the vote.

When the Civil Rights Movement started, the American Nazi Party joined arm-in-arm with the Ku Klux Klan to counter the Freedom Riders and the March on Washington for Jobs and Freedom. But soon thereafter, there was a falling out.

Rockwell believed that the Klan was too archaic to be of any use in waging a modern-day race war in the 1960s. To this end, one of the first things he did was popularize the slogan “white power.” Rockwell would later use that slogan for the name of both the American Nazi Party’s newspaper and for his own book.

Despite the newspaper, the book, the rallies, and demonstrations, contemporary authorities only ever estimated Rockwell’s followers to number between 25 and 100. And when Rockwell himself finally met his end in 1967, the American Nazi Party took an even bigger hit. Much like their German counterparts, Rockwell’s Nazi party all but disintegrated without its core leader.

Rockwell was 49 years old when John Patler, a former member of the American Nazi Party, peppered him with pistol bullets and ended his life.

Patler, a captain in the American Nazi Party as well as the editor and cartoonist for the party magazine, Stormtrooper, became enraged after Rockwell kicked him out of the group for allegedly having “Bolshevik leanings.”

In reality, Patler — whose real name was Patsalos; he switched it to sound more like Hitler — had disagreed with Rockwell in a Nazi meeting about some key party policies and Rockwell excommunicated him for it.

Before that time, Patler and Rockwell had been quite close, at least as the former saw it. In Patler’s last known letter to Rockwell, he wrote, “I don’t think there are two people on earth who think and feel the same as we do… You are a very important part of my life. I need you as much as you need me. Without you there is no future.”

But five months after George Lincoln Rockwell kicked him out, Patler got a 7.63mm Broomhandle Mauser pistol, an iconic German model, perched on top of a building and shot Rockwell to death as he was leaving a laundromat. The bullets shattered through the windshield and Rockwell flopped out of the car, attempting to crawl to safety before the blood loss caught up with him.

After his death, George Lincoln Rockwell’s deputy commander, Matt Koehl, took over the party. He eventually renamed the organization the New Order, reflecting the group’s turn to neo-Nazi mysticism, in 1983 and moved the party headquarters to Wisconsin.

Since then, the actual party has retained a low profile, but its spiritual successors — a myriad of groups espousing anti-Semitism, white nationalism and other such hateful ideologies — now flourish online.

Today, of course, hate groups can recruit followers and disseminate false information anonymously online, at zero social cost to themselves.

That doesn’t mean that George Lincoln Rockwell’s legacy doesn’t live on offline as well. For example, when David Duke, a former one-term Republican Louisiana State Representative and Imperial Wizard of the Ku Klux Klan, learned of Rockwell’s death, he reportedly said, “the greatest American who ever lived has been shot down and killed.”

Duke himself made headlines in 2015 and 2016 after endorsing the presidential candidacy of Donald Trump, whose camp disavowed the endorsement. Nevertheless, Trump’s own actual politics aside, his candidacy and eventual election once again brought many white nationalist groups out of the shadows and into the mainstream media, reaffirming that the ideologies that George Lincoln Rockwell helped pioneer in America are still alive and well.

Intrigued by this look at George Lincoln Rockwell? Next, find out how American eugenics ideas and programs informed Nazi beliefs and practices. Then, discover how IBM helped the Nazis carry out the Holocaust.