In 1944 the Allies used a "Ghost Army" of inflatable tanks and personnel carriers to fool German recon missions. 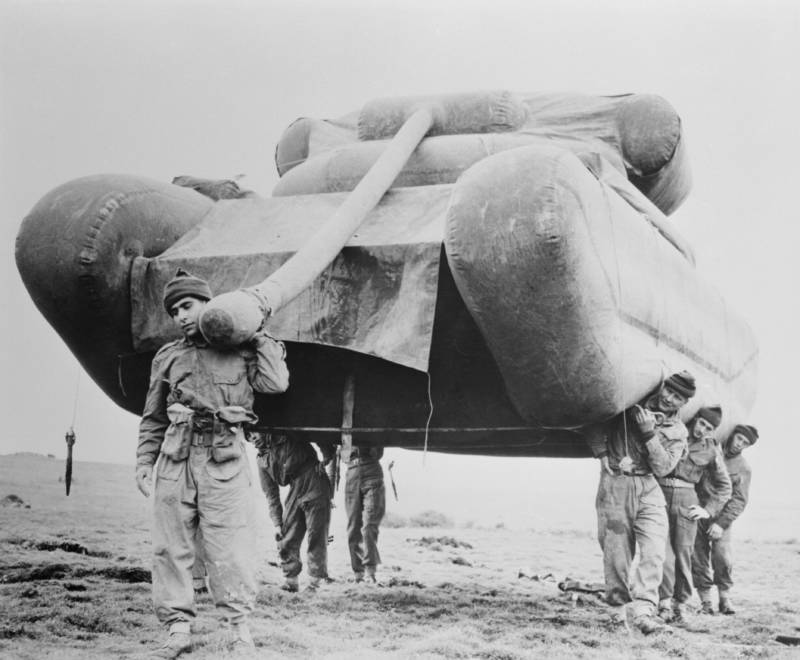 A handful of British tommies on maneuvers at Salisbury Plain hoist an enormous tank on their shoulders and move it to another part of the “battleground.” A Herculean feat? Well, not exactly: The tank is only inflated rubber, one of the several dummy weapons skillfully deployed to baffle the enemy. Some 12,000 men and 4,000 vehicles (real ones) of Britain’s territorial army, roughly equivalent to the United States’ National Guard, took part in the maneuvers.

The success of the Allied invasion of Normandy during World War II came thanks in large part to a fighting force that didn’t even exist. It was called the Ghost Army, and it convinced the Germans that the forthcoming invasion wasn’t going to take place at Normandy.

The D-Day landings of June 6, 1944 comprised one of the most challenging operations in history. The Nazis were after all occupying most of Western Europe and weren’t going to let the Allies gain a foothold without paying a heavy price. 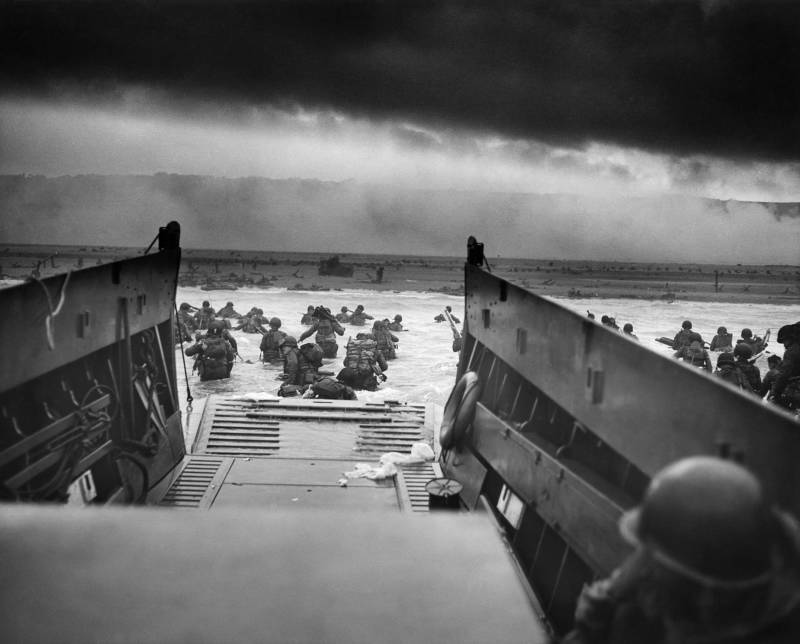 Dubbed Operation Overlord, the invasion of Normandy required a massive level of coordination between more than 1 million troops drawn from the military forces of five different nations. An amphibious operation on this scale had never been attempted before. The Allies knew that success would require a previously unimagined level of ingenuity, courage, and perhaps most importantly, deception.

Adolf Hitler had long expected a sea-borne invasion from England and dispatched one of his best generals, Erwin Rommel, to prepare the defense against it. Rommel set his men to constructing gun emplacements, bunkers, anti-tank obstacles, and more than a million booby-trapped stakes to prevent glider landings that his troops took to calling “Rommel’s asparagus.” These preparations to crush the landings at the beaches threatened to turn the operation into a disaster for the Allies.

Luckily, while the Germans knew the landings were coming, they didn’t know where. And Allied intelligence services intended to make sure it stayed that way. Obviously, there was no way to hide the preparations for the landings. The Germans were bound to notice more than 1 million men marshaling across the English Channel.

So, rather than try to hide the troops, the Allies launched an operation to convince the Germans that they were attacking 200 miles north at Calais instead of Normandy. To do so, they needed to move a significant invasion force to the area across the Channel from Calais. But pulling an entire invasion force from the main operation just to trick the Germans would be a serious threat to its overall success.

Instead, they were going to create one out of thin air. 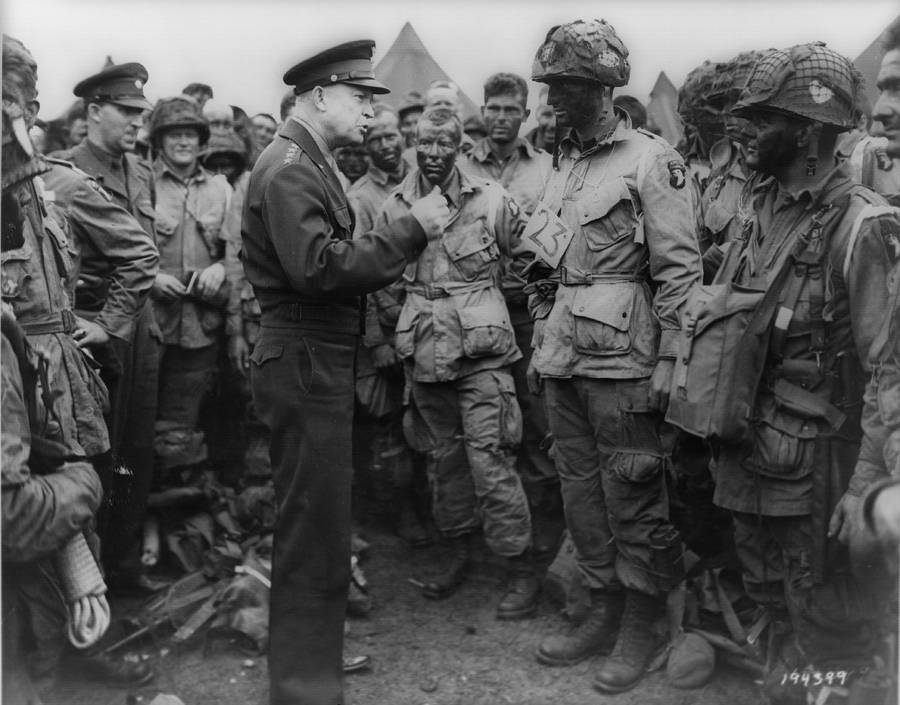 Shortly before D-Day, the Germans began to receive intelligence about a massive force being deployed in southeast England, just miles across the Channel from Calais. Observers began to pick up military radio transmissions. Meanwhile, reconnaissance planes began to return with pictures of tank battalions and military supply trucks gathering in the fields. And German spies soon identified this force as the “First United States Army Group,” led by legendary general George Patton.

But what the Germans were witnessing wasn’t the preparations for an invasion. It was the largest deception operation in military history. The transmissions they were picking up were carefully orchestrated displays by Allied operatives, the tanks they were noticing in reconnaissance photos were inflatable, and their spies were double agents.

But this “Ghost Army” was a real unit. Officially, it was named the 23rd Headquarters Special Troops, organized as part of Operation Quicksilver. Quicksilver was part of a broader deception plan, Operation Bodyguard, that employed thousands of intelligence operatives, artists, and advertising experts and gave them one direction: keep the Germans’ attention away from Normandy.

The men of the Ghost Army soon developed a number of tricks that were stunningly effective at doing just that. Their bread and butter was something they called creating “atmosphere,” a catch-all term that meant simulating large troop movements with only around 1,000 men. 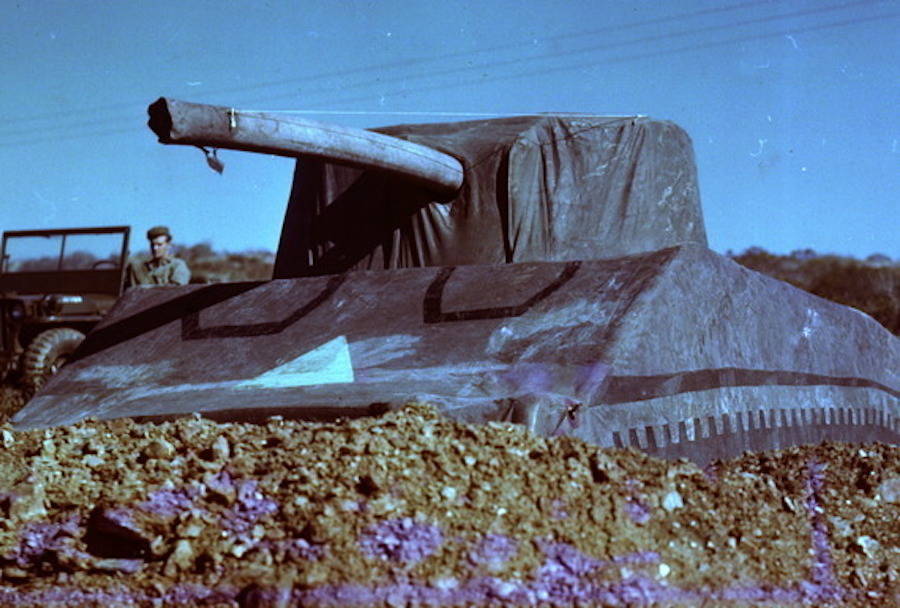 Using their artistic skills, the Ghost Army’s 603rd Camouflage Engineers created hundreds of dummy tanks, planes, landing craft, and artillery pieces. These were extremely convincing at long range, but a closer inspection would reveal that most were made of rubber, wood, and a bit of creative painting.

And that wasn’t all the 23rd had to show the Germans. The Ghost Army combined this dummy equipment with some of their other tricks, like creating fake airfields, motor pools, and troop tents complete with laundry hanging off of clotheslines. The 23rd could move this fake equipment around the country in a matter of hours, effectively summoning entire divisions of 30,000 men out of nowhere.

Obviously, an army camp with no men in it would seem unnaturally quiet. Realizing this, the 23rd organized a “sonic deception” division. This division recorded sounds from US army bases and blasted them from special speakers mounted on half-tracks. These speakers were powerful enough that they could project the simulated movement of tanks, trucks, and men from over 15 miles away.

Of course, what is a Ghost Army without soldiers? And the 23rd had an answer to this question as well. Members of the division frequently walked around nearby towns wearing the identifying patches of other units. Any enemy spies who saw these soldiers and took note of their patches would think that dozens of different divisions were moving through the area. 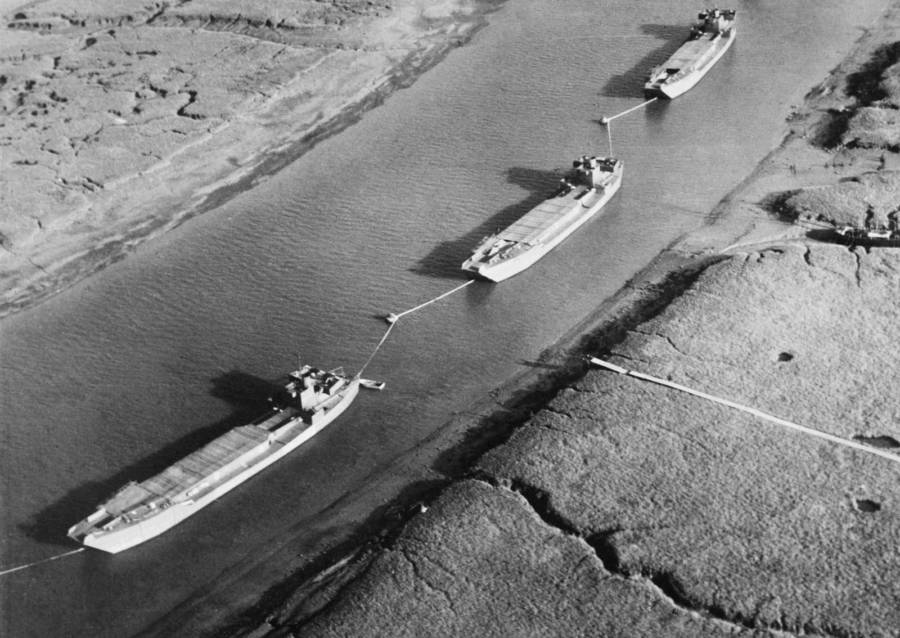 Altogether, this gave off the rather convincing impression that a massive invasion force was assembling in South West England. Patton, who was nominally in charge of this force, played his role as well. He spent weeks tirelessly shuttling between positions and delivering profanity-filled speeches to the troops, creating the impression that he was preparing to lead them into battle.

The German intelligence units reported Patton’s force to their superiors, reinforcing their belief that the real invasion would come at Calais.

The deception was such a success that even after the landings began, the Germans held their reserve divisions in Calais. They were convinced that the landings at Normandy were meant to draw their attention from the real invasion by Patton’s First Army Group. Even with the distraction, the Normandy landings were hard-fought. And those reserve divisions might have been enough to tip the balance against the Allies.

Operation Fortitude might have ultimately saved the D-Day operations from disaster. And after the invasion, the Ghost Army continued to tour the front, tricking the Axis powers time and again into diverting troops away from where they were needed most. Ultimately, the brilliant illusions helped win the war and saved the lives of thousands of troops.

After reading about Operation Quicksilver and the Allies ghost army, view these stunning color images of World War II. Then, read about how “Ghost Soldiers” helped the Allies win the war.