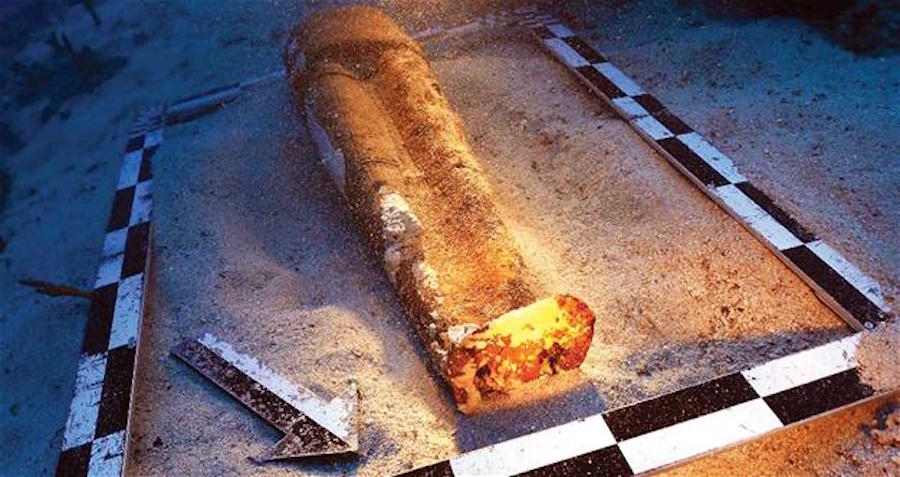 Turkish researchers have found the lower half of a 2,700-year-old ceramic sculpture of a Cypriot goddess lying deep in the Aegean Sea.

Researchers from the Dokuz Eylül University (DEU) Marine Science and Technology Institute state that the statue, discovered 141 feet below the surface, dates back to the archaic period, one of the earliest periods of Mediterranean culture (800 BC–480 BC).

Although the researchers found only the lower half of the sculpture, they’ve deemed it to be the largest ever discovered in the history of Turkish underwater archaeology. In addition to the statue itself, ceramic dinner plates and amphoras (ancient Greek jars with handles and a narrow neck), were scattered around the sculpture across an area of about 3,000 square feet.

Associate Professor Harun Özdaş, the deputy director at the institute’s Aegean Research and Application Center (EBAMER) and the head of the excavations, said that he believes that these discoveries could provide insight into a crucial period of Mediterranean history, telling Hurriyet Daily News:

“We found such a big terra-cotta sculpture for the first time on the coasts of [Turkey]. Current research shows that the sea was the most important means of communication among Mediterranean civilizations in the ancient ages. In addition to the research so far, the current ones made with the use of technological tools and methods show us that not only products but also opinions and philosophy were exchanged between the civilizations. Mediterranean civilizations progressed throughout ages by leaving traces on the sea. Now, using these traces, we study the civilizations that lived on the coast of [Turkey].”

However, it’s lucky that researchers were able to make these discoveries in the first place. Piles of sand covered the ceramic sculpture, hiding the statue for months despite the fact that researchers first excavated the area in November.

Now, according to Özdaş, the search is on to find both the top half of the goddess as well as any other treasures waiting to be uncovered at the bottom of the Aegean.