Inside The Life Of Calamity Jane, The Wild West’s Most Notorious Frontierswoman

The life of Calamity Jane may be more fiction than fact, but her story is enthralling either way.

In the hyper-masculine world of the Wild West, Calamity Jane could shoot, ride, and drink with the toughest cowboys of her day.

Growing Up On The Frontier

From the mix of tall tales and exaggerations that make up the life of Calamity Jane, facts are like the nuggets of gold in the west — rare. She herself published an autobiography in 1896 that most historians peg as trumped-up fiction, and most accounts of her life weave together legend and truth.

Still, there are a few parts of Calamity’s life that are mostly certain.

Calamity Jane was born Martha Jane Canary (sometimes written as “Cannary”) in 1856 — though she claimed she was born in 1852 — near Princeton, Missouri, right on the Iowa border. It was nine years before the outbreak of the Civil War. Her father, Robert, was a farmer. Her mother, Charlotte, was by some accounts an illiterate prostitute whose husband tried to reform her.

In her book The Autobiography of Calamity Jane, Calamity claims to have been the oldest of five siblings, two brothers and three sisters, spending the better part of her Missouri childhood riding horses. 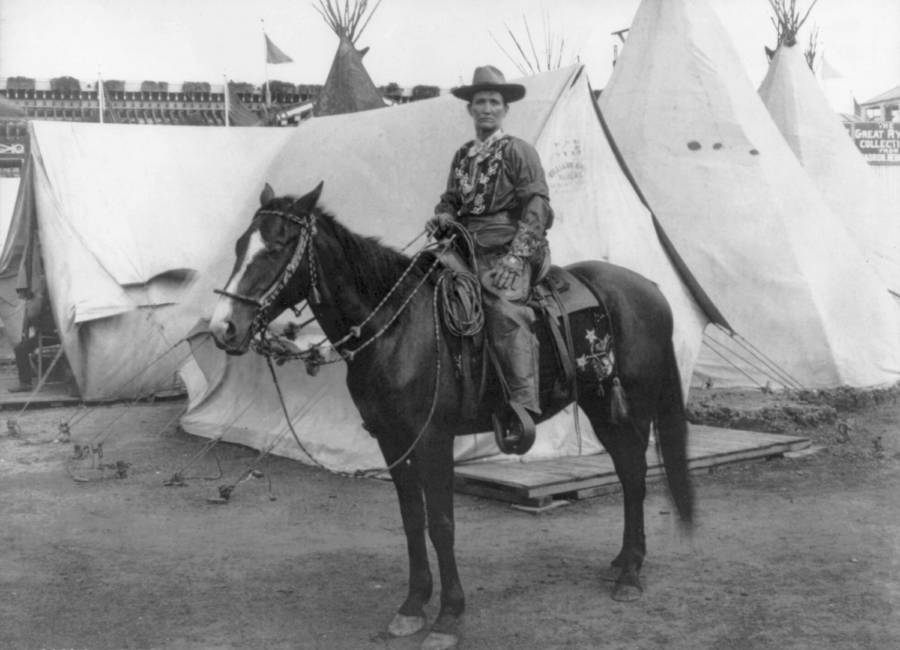 C.D. Arnold/Library of CongressMartha Jane Canary, better known as Calamity Jane, at the Pan-American Exposition in Buffalo, New York in 1901.

In the early 1860s, Canary’s family headed to Montana for gold. Her mother died in Blackfoot, Montana, possibly of pneumonia, and her father died soon after taking his children to Salt Lake City. It’s not clear what happened to her siblings, but by the time she was around 15 Canary was on her own.

She went to Piedmont, Wyoming, about 75 miles northeast of Salt Lake, where she worked at a boarding house and danced with soldiers at night. Though she later claimed to have spent her teens riding “many dangerous missions” in the American Indian Wars in Arizona — “I was considered the most reckless and daring rider and one of the best shots in the western country,” her autobiography reads — she most likely worked as a laundress, dancer, and prostitute along the Wyoming railroad. 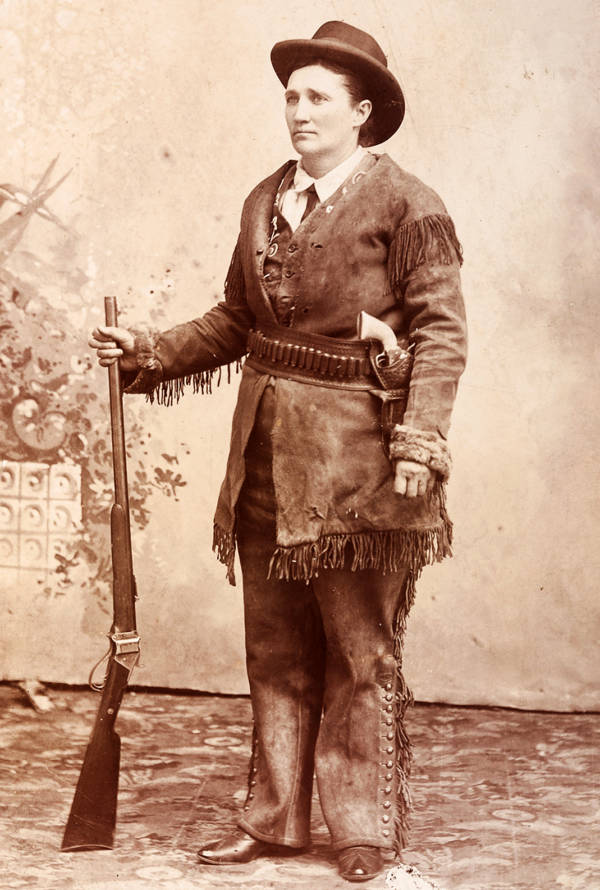 Wikimedia CommonsCalamity Jane refused to dress like women of the day.

How did Martha Jane Canary go from an orphaned prostitute to one of the most famous women in the Wild West? In Wyoming, she began to develop the identity that would make her famous as Calamity Jane.

Canary knew how to shoot, she liked to dress as a man (or perhaps more accurately, she refused to dress like women of the era), and, like men, she chewed tobacco and drank a lot of alcohol. That set her apart from her cohorts; she was reportedly one of the first white women to enter the Black Hills of South Dakota.

“The first place that attracted her attention,” according to one train captain who saw her there when she was 20 years old, “was a saloon, where she was soon made blind as a bat from looking through the bottom of a glass.”

Canary quickly gained notoriety in 1876 Deadwood, South Dakota, where she rubbed shoulders with the likes of Wild Bill Hickok. Her personality caught the attention of dime novel writer Edward Wheeler, who worked Calamity Jane into his popular stories as a Wild West heroine.

But how did Canary become Calamity Jane? The origin of the “Calamity Jane” moniker is, as with the rest of her life, unknown for certain. But there are a few of theories.

In the first, Martha Jane rescued a man from his horse during a raid by Native Americans. Shot by the Indians, Martha Jane pulled him onto her own steed. He said to her: “I name you Calamity Jane, the heroine of the plains.” In another version, it’s said that to offend Martha Jane was to “court calamity.”

Another is a bit simpler: Jane was a popular nickname for women in the Wild West (Lewis and Clark called Sacagawea “Jane”), and her life had been such a calamity.

In any case, the nickname stuck. 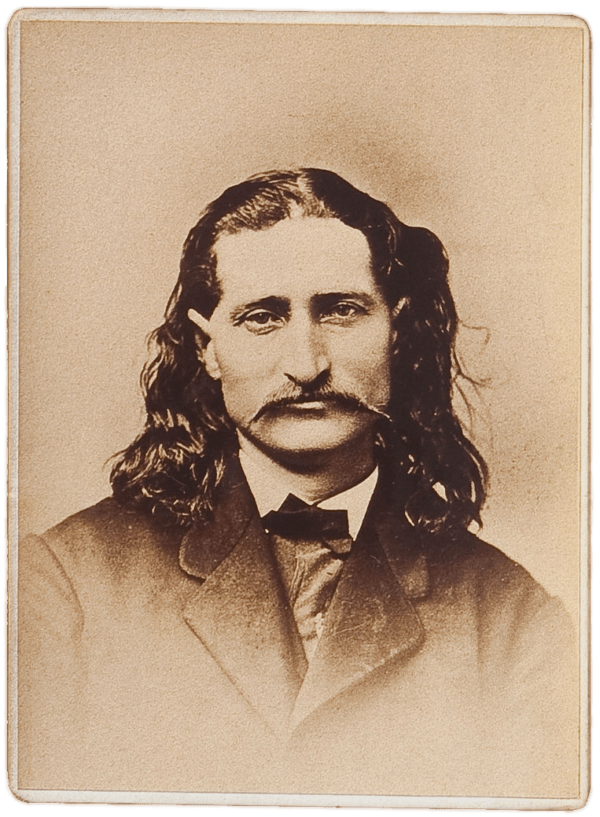 A big element of Calamity Jane’s reputation today – and part of the reason she became famous in her own time — was her purported romance with American folk hero James Butler “Wild Bill” Hickok.

In her 1896 autobiography, she calls Hickok her “friend,” and by 1902 she told the press he was her “affianced husband.” In 1941, a 68-year-old woman named Jean McCormick went on the CBS radio program We the People to announce that she was long-lost daughter of Calamity Jane and Wild Bill Hickok, and she supposedly had a trove of handwritten letters from Calamity – and a marriage certificate between Calamity and Hickok — to prove it.

The real story? They may have been casual friends — they were both in Deadwood in 1876 — but in all likelihood Hickok and Calamity were never lovers.

In fact, Calamity only knew Hickok for six weeks before his murder at the Nuttal & Mann Salon in Deadwood. (Killed during a poker game, Bill held two aces and an eight, now called the “dead man’s hand.”) The marriage certificate and album of purported letters from Calamity to her daughter Jean were very likely made up by McCormick as a last-ditch effort to get some money and a few minutes of fame in the last years of her life.

Calamity also claimed to have married Clinton Burke in El Paso, Texas in 1885, and to have remained there until 1889. But news reports show she wasn’t even in Texas at that time.

More likely was that she married a man named Bill Steers in Wyoming, with whom she had two children: a boy who died in infancy, and a girl who lived into the 1960s.

Acts Of Bravery And Kindness 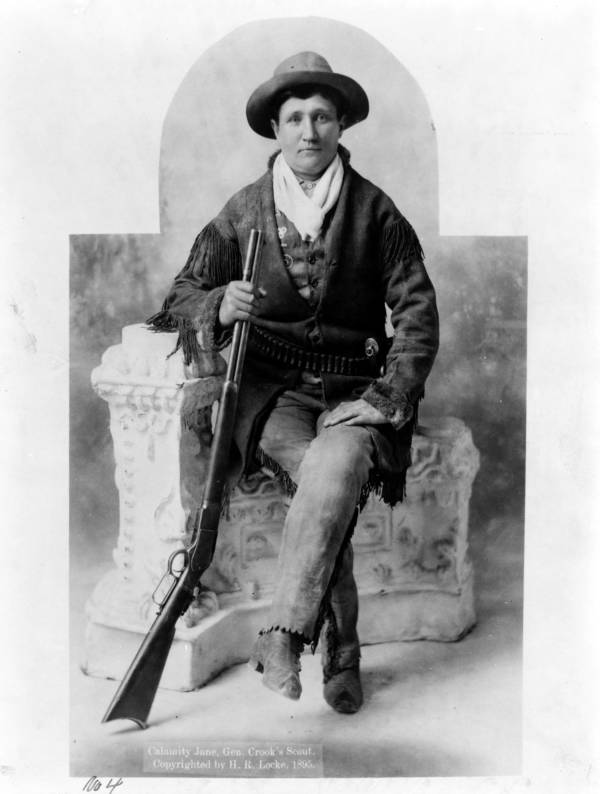 Wikimedia CommonsCalamity Jane has a tough reputation, but during her life she was known for her acts of kindness and bravery

Although the moniker of “Calamity Jane” evokes an image of a gunslinging, tobacco-spitting outlaw, much of Calamity’s reputation came from her bravery and good heart. Upon her return to Deadwood in 1895, after a 16-year absence, the Black Hills Daily Times wrote:

“She has always been known for her friendliness, generosity and happy cordial manner. It didn’t matter to her whether a person was rich or poor, white or black, or what their circumstances were, Calamity Jane was just the same to all. Her purse was always open to help a hungry fellow, and she was one of the first to proffer her help in cases of sickness, accidents or any distress.”

One man described her as “the last person to hold the head of and administer consolation to the troubled gambler or erstwhile bad man who was about to depart into the new country.” 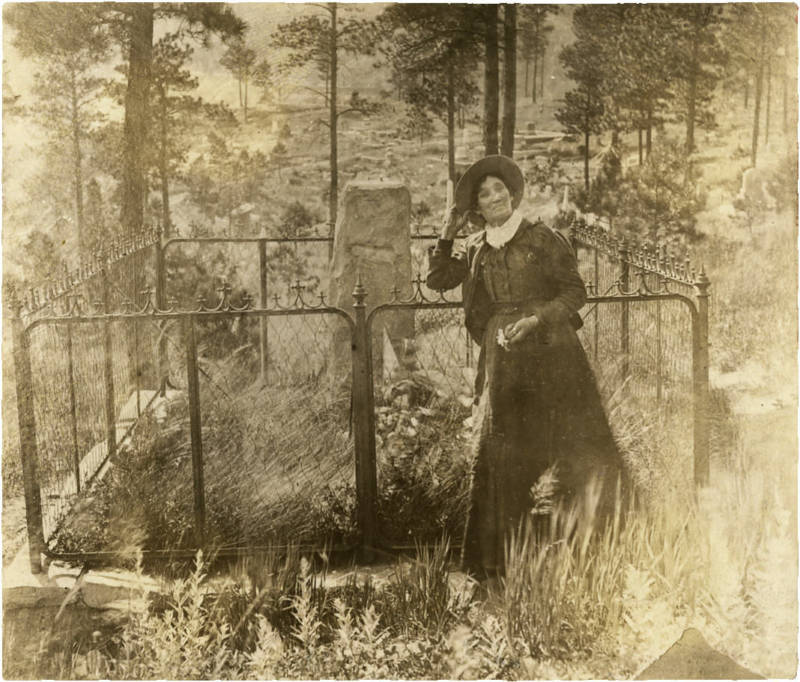 Wikimedia CommonsCalamity Jane poses at Wild Bill’s grave. She would later be buried next to him

“[Calamity Jane] was the Courtney Love of her day: A talented pioneer in a man’s world, she was a chronic substance abuser prone to outrageous behavior and forever linked in the public mind to a dead man whose fame overshadowed her own.”

With the success of Wheeler’s Calamity Jane stories, Calamity supported herself by banking on her notoriety and selling photos of herself for extra cash. After publishing her 1896 autobiography — which Calamity, likely illiterate, recited to a scribe — she appeared in dime museum shows and rodeos, from Minneapolis to Buffalo, New York.

In 1903 she died near Deadwood of “inflammation of the bowels,” likely caused by alcoholism. She was only in her late 40s, but years of drinking made her look much older.

Calamity was buried next to Wild Bill Hickok. Why? The reasoning varies from the romantic (Calamity Jane died with his name on her lips) to the vengeful (his friends thought it’d be a funny prank). It could also be because she swore she married Hickok, even though every piece of evidence points to the contrary.

With so much misinformation surrounding the life of Calamity Jane, her persona has easily taken on a variety of forms in popular fiction. In the 1953 film Calamity Jane, Doris Day provided a G-rated, ted, light-hearted portrayal of the tough Calamity Jane — singing, dancing, and engaging in cheerful mischief.

In the TV series Deadwood, on the other hand, Calamity Jane, portrayed by Robin Weigert, is a tough, hard-drinking frontierswoman who can keep up with the boys.

Her life’s story, which Calamity herself happily confused with fiction, may never be fully known.

Next, learn more about Calamity Jane’s maybe-lover, “Wild Bill” Hickok and the men he claimed to kill. Then, check out these 48 turn-of-the-century photographs of the American frontier.