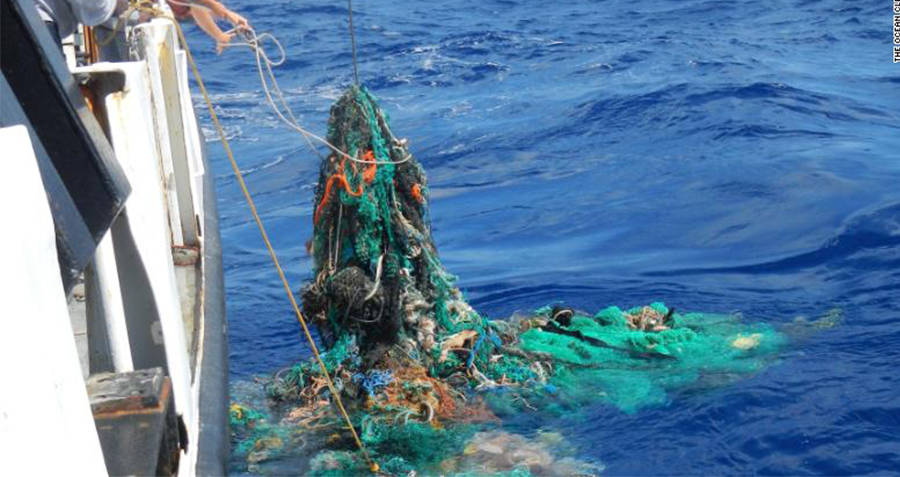 CNNScientists pull ghost nets from the Pacific Ocean near the garbage patch.

In 1997, oceanographer Charles Moore was sailing between Southern California and Hawaii when he came across a horrifying sight.

“I was confronted, as far as the eye could see, with the sight of plastic,” he said. “In the week it took to cross the subtropical high, no matter what time of day I looked, plastic debris was floating everywhere: bottles, bottle caps, wrappers, fragments.”

That mass of plastic quickly became known as the Great Pacific Garbage Patch, and in the 21 years since it’s been discovered, it’s grown to almost three times the size of France. For scale, France covers just over 200,000 square miles, meaning that the garbage patch is over 600,000 square miles wide.

The new findings mean that the garbage pile is 16 times larger than scientists previously thought.

Most of the mass is made up of discarded fishing nets, known as “ghost nets,” which either get left behind or torn from fishing boats, but they’re not responsible for all of the 80,000 tons of trash. Scientists believe that around 20 percent of the mass is left over from the 2011 Japanese tsunami or other tropical storms.

The most recent study of the mass was conducted by an international team of scientists working with The Ocean Cleanup Foundation, six universities, and an aerial surveyor company. Two aircraft were deployed to conduct surveys of the area, while 30 vessels sailed across the debris field collecting research.

Over the span of their research, the group collected 1.2 million samples of plastic, scanned 300 kilometers of ocean surface, and used sensors to collect 3D scans of the garbage.

“We were surprised by the amount of large plastic objects we encountered,” Chief Scientist Julia Reisser said in a statement. “We used to think most of the debris consists of small fragments, but this new analysis shines a new light on the scope of the debris.”

Research scientist Britta Hardesty, who was not involved in this particular study but has researched ocean trash in the past feels that nets are only a fraction of the problem.

“It’s not fair to just blame it on the fishermen or the top 20 countries for mismanaging waste,” she said. “Instead we need to look at the true value and cost of plastics, and factor in the costs of livelihood and tourism.”

Next, check out the garbage avalanche that killed 17 people in Mozambique. Then, read about Sweden’s proposal to end our garbage problem.