How The Gulf Of Tonkin Incident Sparked The Vietnam War

In August 1964, the U.S. entered the Vietnam War based on reports of an unprovoked attack in the Gulf of Tonkin — which the president knew were false.

In August 1964, the American destroyer USS Maddox was stationed in the Gulf of Tonkin off the coast of North Vietnam. That month, this ship was involved in two events collectively referred to as the Gulf of Tonkin incident, which changed the course of modern history in ways that reverberate to this day.

On August 2, it was attacked by North Vietnamese torpedo boats. And then, two days later, on August 4, the Johnson administration claimed that it had been attacked again. After the second attack, the U.S. Congress passed the Gulf of Tonkin Resolution almost unanimously, allowing the federal government to “take all necessary measures” to protect U.S. forces in Vietnam.

It was tantamount to a declaration of war, but it was based on a lie.

After decades of public skepticism and government secrecy, the truth finally came out: In the early 2000s, nearly 200 documents were declassified and released by the National Security Agency (NSA).

They showed that there was no attack on August 4. U.S. officials had distorted the truth about the Gulf of Tonkin incident for their own gains — and perhaps for Johnson’s own political prospects.

This lie jumpstarted a war that would claim 58,220 American and more than 3 million Vietnamese lives. This is the true story of the Gulf of Tonkin incident.

Rising Tensions Before The Gulf Of Tonkin Incident 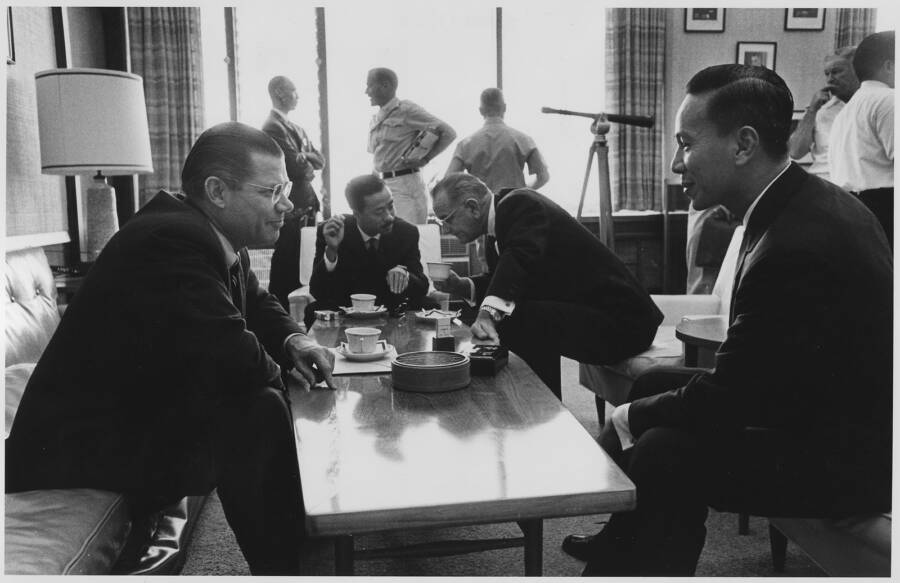 After the assassination of President John F. Kennedy, President Lyndon B. Johnson and Secretary of Defense Robert McNamara slowly increased military pressure on the coast of North Vietnam, aiding the South in offensive strikes and intelligence-gathering.

In 1964, South Vietnam began conducting a series of attacks and missions along the North Vietnamese coasts, backed by the United States. This plan, known as Operations Plan (OPLAN) 34A, was conceived and overseen by the U.S. Department of Defense and the CIA, but was carried out using South Vietnamese forces.

After a series of unsuccessful missions, OPLAN 34A shifted its focus from the land to the sea, attacking the North’s coastal infrastructure and defense from the water. 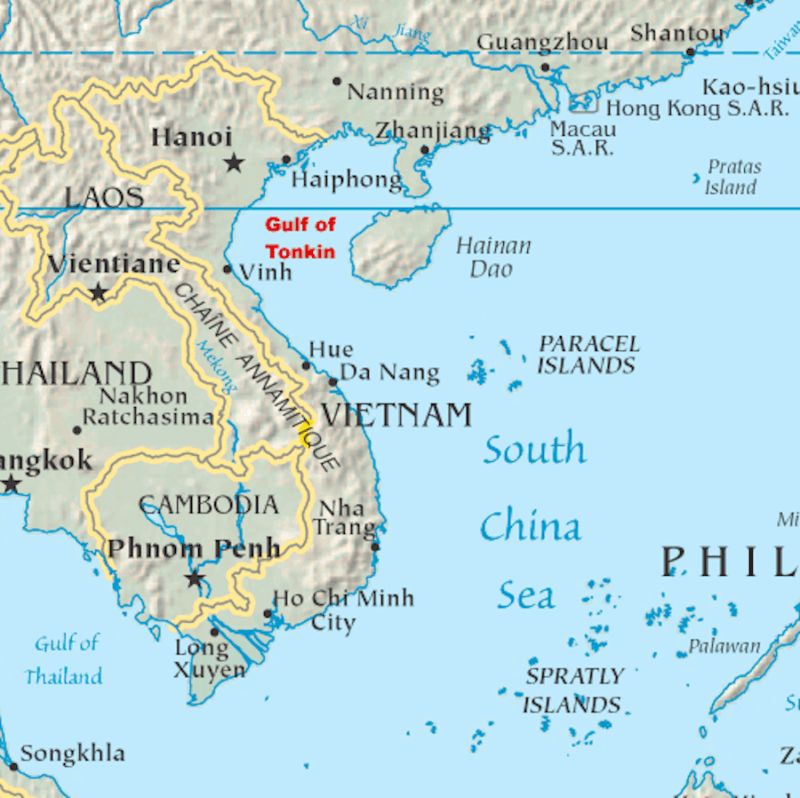 Wikimedia CommonsA map of the Gulf of Tonkin, where the supposed attacks took place on Aug. 4, 1964.

By 1964, the pressure on these waters had reached a boil, and North Vietnamese forces were not about to stand still against these operations.

By the end of July, they were tracking the USS Maddox, which was stationed in international waters just a few miles outside of Hòn Mê Island in the Gulf of Tonkin. The U.S. Navy destroyer didn’t attack the North Vietnamese directly, but it did gather intelligence in sync with South Vietnamese attacks on the North.

The First Attack In The Gulf Of Tonkin 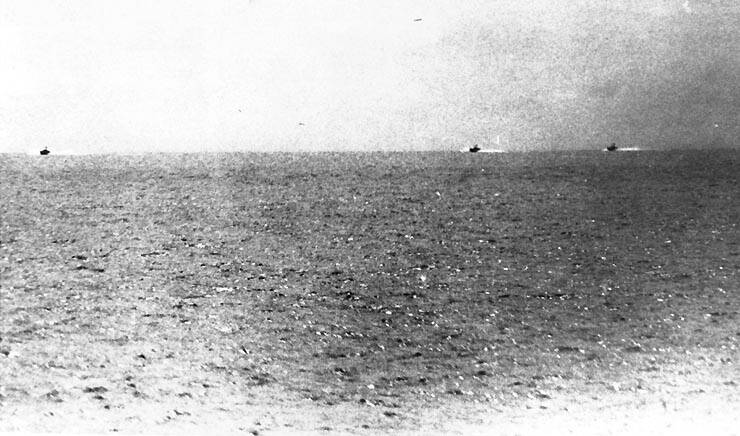 At the end of July 1964, the USS Maddox was sent to patrol the waters off the North Vietnamese coastline in the Gulf of Tonkin. It had been ordered to “locate and identify all coastal radar transmitters, note all navigation aids along the DVR’s [Democratic Republic of Vietnam’s] coastline, and monitor the Vietnamese junk fleet for a possible connection to DRV/Viet Cong maritime supply and infiltration routes.”

At the same time it gathered this intelligence, the South Vietnamese navy conducted strikes on multiple North Vietnamese islands.

And while the Maddox remained in international waters, three North Vietnamese patrol boats began tracking the destroyer in early August.

Captain John Herrick intercepted communications from these North Vietnamese forces that suggested they were preparing for an attack, so he retreated from the area. Within 24 hours, though, the Maddox resumed its normal patrolling routine.

On August 2, Capt. Herrick sent a flash message to the U.S. saying he had “received info indicating possible hostile action.” He had spotted three North Vietnamese torpedo boats coming his way, and once again began to retreat. 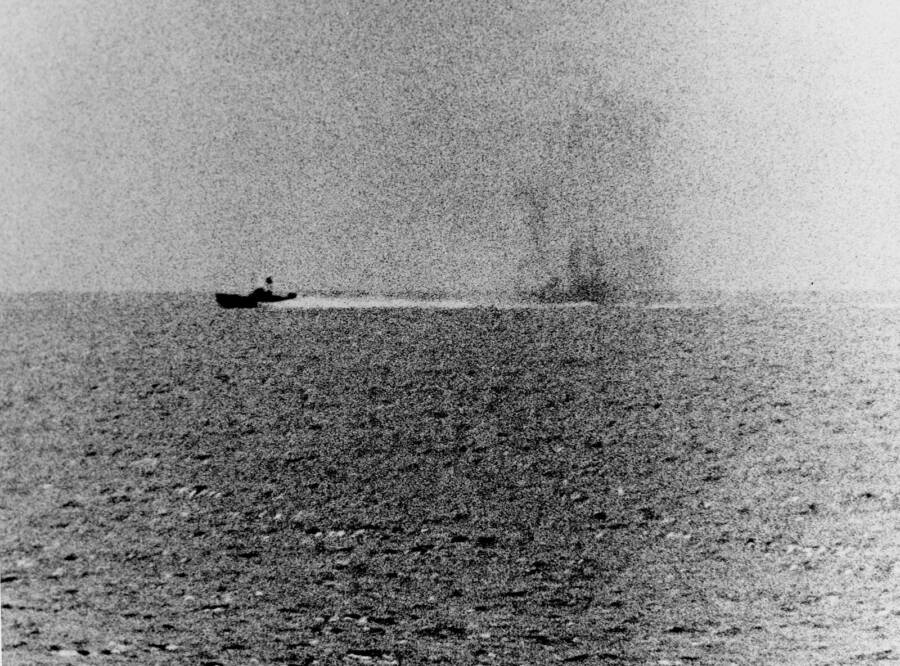 U.S. Navy Naval History and Heritage CommandThe North Vietnamese torpedo boats under fire, as photographed on board the USS Maddox.

The destroyer was ordered to fire warning shots if the enemy vessels closed within 10,000 yards. The torpedo boats sped up, and the warning shots were fired.

After these first shots, the North Vietnamese forces made their attack. Captain Herrick radioed that the USS Maddox was under attack, and U.S. officials ordered nearby aircraft from the USS Ticonderoga to fly in as backup. As the enemy vessels launched their torpedoes, U.S. forces attacked them from above and below, severely damaging the boats.

The USS Maddox evaded the torpedo attack, suffering only slight damage, and sailed off to safer waters. 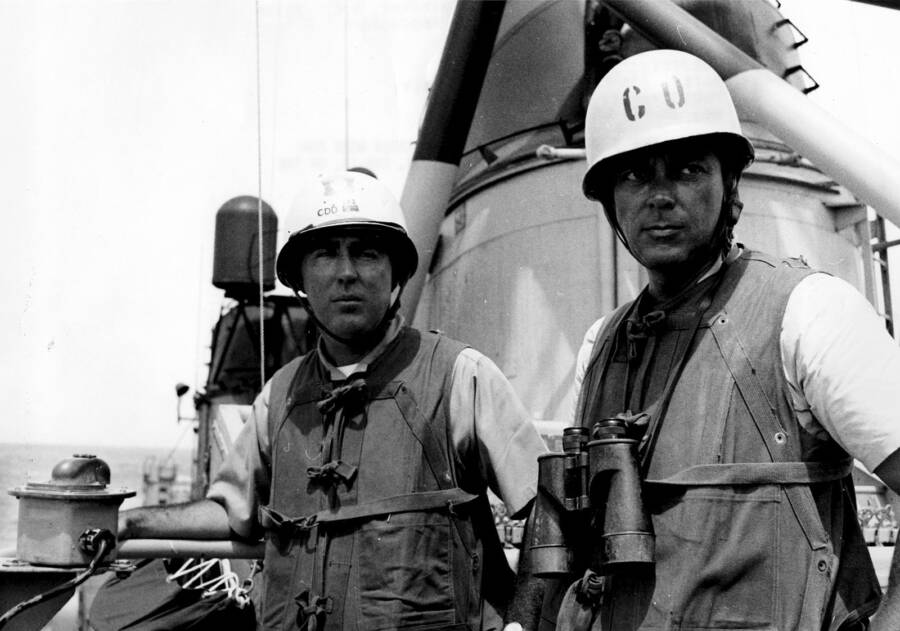 The next day, the USS Maddox once again resumed its normal patrol, this time alongside another U.S. Navy destroyer, the USS Turner Joy.

The two destroyers stayed miles away from the coastlines in the Gulf of Tonkin. Still, U.S. intelligence reportedly intercepted messages indicating that the North Vietnamese forces were planning offensive operations on the Tonkin Gulf.

Although August 4 was a stormy day, Captain Herrick ordered the two destroyers further out to sea in order to give them more space in the case of an attack.

The U.S. vessels were now more than 100 miles away from the North Vietnamese coastline when their trackers started to light up. The Maddox reported seeing multiple unidentified vessels on their sonars coming at them from different directions. They’d disappear, only to reappear seconds or minutes later in a completely different location.

Afraid of attackers, Captain Herrick sent flash messages to U.S. officials while desperately trying to move the ships out of harm’s way. But every time he hightailed it out of one area, another blip on the sonar would appear. 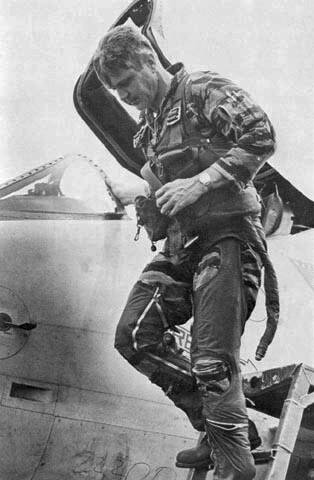 U.S. NavyCommander James Bond Stockdale exiting his aircraft. Stockdale was always adamant that no attack ever occurred on August 4.

The pilots from the Ticonderoga aircraft responded, flying overhead the destroyers for an hour and a half. However, with this bird’s eye view, something wasn’t adding up.

As Commander James Stockdale, one of the pilots at the Gulf of Tonkin incident, later said, “I had the best seat in the house to watch that event, and our destroyers were just shooting at phantom targets — there were no PT boats there…nothing there but black water and American firepower.”

What the Maddox operators were probably hearing was the ship’s propellers reflecting off its rudder during sharp turns. And the sonars were probably just catching the tops of big waves.

As the battle continued, Captain Herrick too began to have doubts about these attacks. He soon realized that the vessels they were tracking on the Maddox may have actually been the result of poor equipment performance and inexperienced sonar operators. In fact, the Turner Joy had not detected any torpedoes during the entire event.

During the early hours of the morning of August 5, Herrick sent a message to Honolulu that said, “Review of action makes many reported contacts and torpedoes fired appear doubtful. Freak weather effects on radar and overeager sonarmen may have accounted for many reports. No actual visual sighting by Maddox. Suggest complete evaluation before any further action taken.”

The Aftermath Of The Gulf Of Tonkin Incident In The U.S.

Despite the captain’s efforts to correct the errors of his original messages during the Gulf of Tonkin incident, U.S. officials took the idea of unprovoked attacks and ran with it.

Shortly after the attack was reported, President Johnson made his decision to retaliate. He immediately appeared in front of the United States with a televised speech.

“As President and Commander in Chief,” he said, “it is my duty to the American people to report that renewed hostile actions against United States ships on the high seas in the Gulf of Tonkin have today required me to order the military forces of the United States to take action in reply.”

“The initial attack on the destroyer Maddox, on August 2, was repeated today by a number of hostile vessels attacking two U.S. destroyers with torpedoes.”

Mere hours after the speech, Commander Stockdale was ordered to launch an airstrike against the North Vietnamese forces as retaliation for their supposed attacks the evening before. 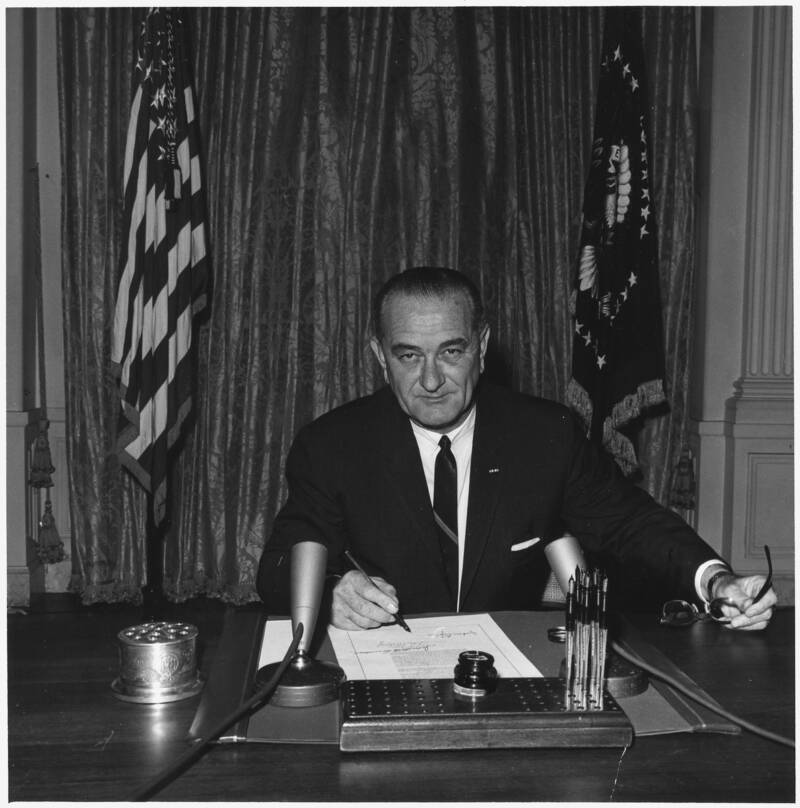 Stockdale later said, “We were about to launch a war under false pretenses, in the face of the on-scene military commander’s advice to the contrary.”

Despite this, he led a strike of 18 aircraft against an oil storage facility located just inland of where the alleged Gulf of Tonkin incident had occurred. This U.S. retaliation marked the nation’s first overt military action against the North Vietnamese.

Two days later, on August 7, Congress approved the Gulf of Tonkin Resolution, which gave the president authority to increase U.S. involvement in the war between North and South Vietnam. President Johnson signed this into law three days later, privately remarking that the resolution “was like Grandma’s nightshirt. It covers everything.”

The floodgates had opened. America had entered in the Vietnam War.

The Truth Comes Out 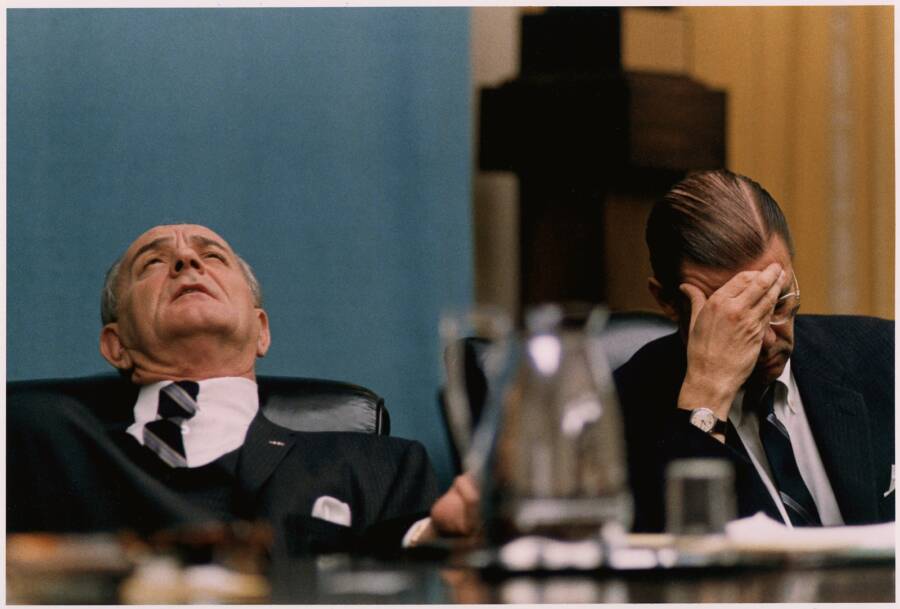 Recently released tapes and documents reveal the truth — and lies — of the Gulf of Tonkin incident and its resolution.

Some people suspected the deception all along. In 1967, former naval officer John White, who had spoken to the men involved in the alleged attack on August 4, 1964, wrote a letter stating, “I maintain that President Johnson, Secretary McNamara and the Joint Chiefs of Staff gave false information to Congress in their report about U.S. destroyers being attacked in the Gulf of Tonkin.”

But the government itself wouldn’t confirm White’s suspicions for decades.

One of the most important documents that was released to the public in 2005 is a study by NSA historian Robert J. Hanyok. He conducted an analysis of the records from the nights of the attacks and concluded that while there was indeed an attack on August 2, nothing malicious happened on August 4.

Additionally, he concluded that many pieces of evidence were carefully picked to distort the truth. For example, some of the signals intercepted during those August evenings were falsified, while others were altered to show different time receipts.

However, President Johnson and Secretary of Defense McNamara treated these original, purposefully distorted reports as crucial evidence during their arguments for retaliation, ignoring the majority of reports that concluded that no attack had occurred.

As Hanyok put it, “The overwhelming body of reports, if used, would have told the story that no attack occurred.”

L. Paul Epley/National ArchivesTwo soldiers next to a fallen man during the Vietnam War.

Although the Johnson administration knew that the Gulf of Tonkin incident was, in fact, no incident at all, they still made the executive decision to distort the events in their favor.

Johnson won the 1964 election by a landslide, winning a greater share of the popular vote than any presidential candidate had since 1820. By mid-1965, his approval rating was 70 percent (though it fell precipitously once the war dragged on longer than expected).

After learning about the Gulf of Tonkin incident, check out these photos from the anti-Vietnam War movement. Then read these 27 Vietnam War facts that will change the way you think about American history.