Meet Ham The Chimp, The NASA Astronaut And First Chimpanzee In Space

In 1961, Ham made history when he became the first chimp to survive spaceflight. Though he returned to Earth as a celebrity, his training was controversial. 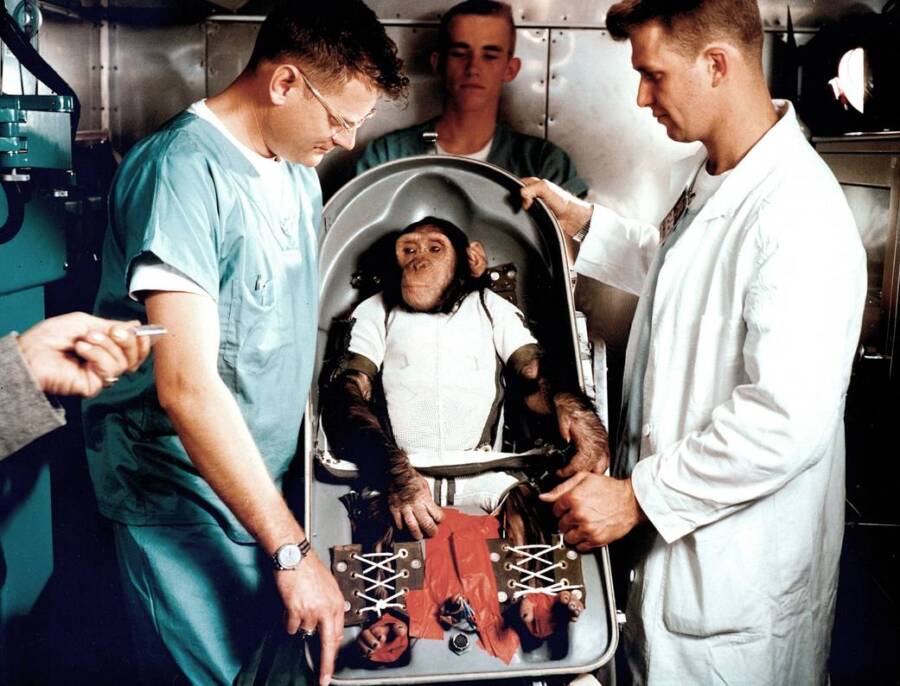 NASAHam in his capsule with handler Edward Dittmer.

Ham the chimp made history as the first chimp in space on Jan. 31, 1961. Project Mercury, NASA’s first human spaceflight program, hoped to send a man into Earth’s orbit and safely return him. With Ham’s help, it did just over three months later.

The space race between the United States and Soviet Union had been heating up since the late 1950s. The Soviets had already sent dogs into orbit, proving that mammals could survive in space.

But NASA wanted to show that humans could perform tasks in zero gravity, and the astrochimp project was born.

Although Ham’s space flight only lasted 16 and a half minutes, the data it provided NASA engineers proved invaluable to the future of space flight. And it made Ham the chimp one of the most famous apes to ever live.

“Number 65” Is Captured And Trained By NASA

Ham the chimp was born in July 1957 in French Cameroon. He was two years old when animal trappers caught him in the wild and sold him to the Rare Bird Farm in Miami, Florida. 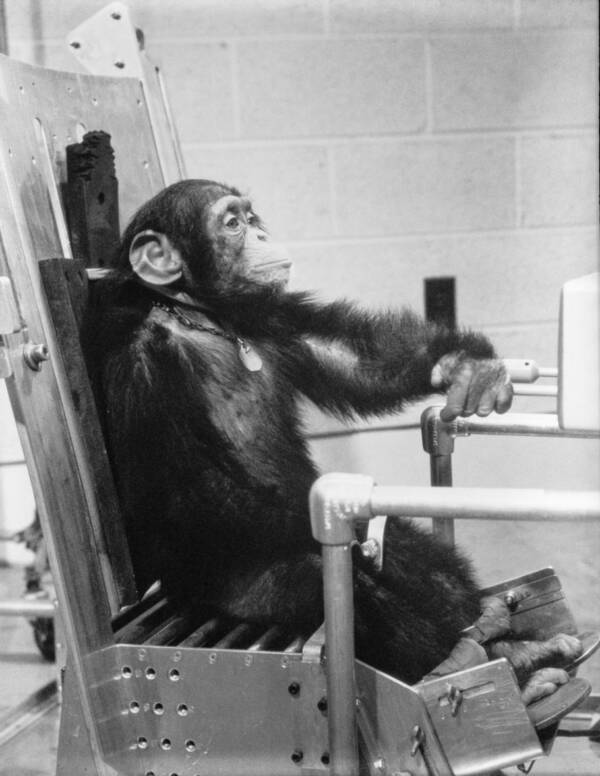 NASAHam during training with NASA in 1960.

The U.S. Air Force purchased him and 39 other candidates to prepare for the mission at Holloman Air Force Base in Alamogordo, New Mexico. NASA scientists put every chimpanzee through a series of tests and ultimately selected Ham for his mental acuity.

In public, NASA simply called him “Number 65,” for fear that the press would latch onto a cute name should the mission not go as planned. The name Ham, after the Holloman Aerospace Medical Center where he was housed, wasn’t given until after he had returned safely to Earth.

“He was wonderful,” his handler Edward Dittmer said. “He performed so well and was a remarkably easy chimp to handle. I’d hold him and he was just like a little kid.”

Using a controversial process called avoidance conditioning, NASA trained Ham to perform simple tasks under pressure to see if it was safe to have an astronaut control the spacecraft.

He would receive an electric shock to the soles of his feet if he failed to pull a lever within five seconds of seeing a flashing blue light. Another test had him choose which shape in a series of three didn’t match the others. Once in orbit, he would have to do the same.

The First Chimp In Space

On Jan. 31, 1961, Ham the chimp was fitted with sensors monitoring his vitals and strapped into a chair called the “biopack” from which he would perform his tasks, monitored by computers on the ground. 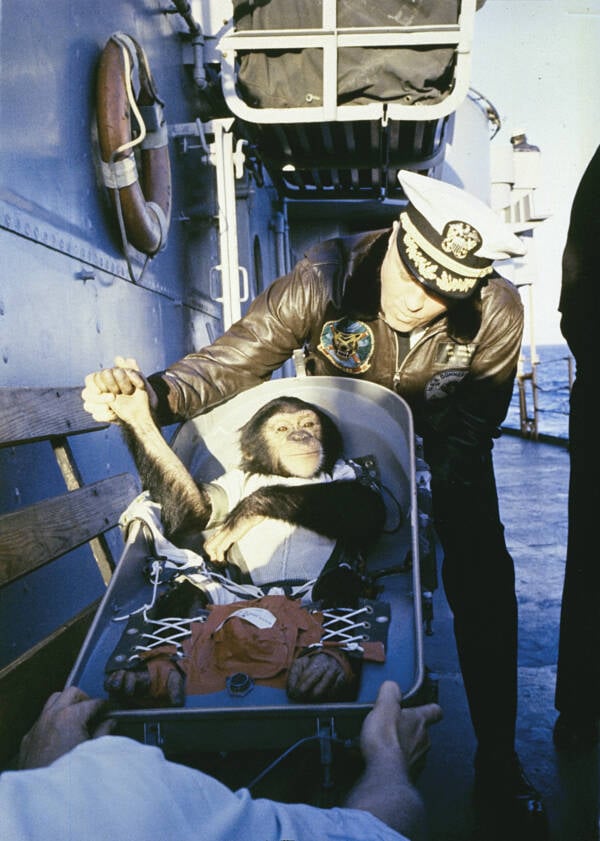 NASAHam on the USS Donner after being rescued.

When the Mercury-Redstone 2 launched into suborbital flight, it did so at 5,857 miles per hour and reached an altitude of 157 miles above Earth. This was over 1,400 miles-per-hour faster and 42 miles higher than NASA had planned due to air pressure loss in the capsule caused by a crack.

Fortunately, Ham’s suit protected him, and scientists confirmed that a mammal could function in space. Ham’s performance was only a fraction of a second slower than it was on Earth. In 16 minutes and 39 seconds, the flight was over. He had spent six and a half minutes in total weightlessness.

But the crack had caused more problems, and Ham landed 132 miles from where he was supposed to in the Atlantic Ocean. The USS Donner, which was stationed to retrieve him, needed hours to reroute to the new landing spot. Meanwhile, water came in through the crack and reached dangerous levels before the ship arrived to ferry him to safety.

Though Ham appeared to smile in photos capturing his rescue, primatologist Jane Goodall said it was a sign of fear. “I have never seen such terror on a chimp’s face,” she told The Guardian. Ham even vehemently refused to get back in the chair for a post-mission photo op.

Ham The Chimp Is Buried In New Mexico

Following his landing, Ham achieved pop culture celebrity, appearing on the cover of LIFE magazine and even in a movie with Evel Knievel. His test flight gave NASA the data needed to successfully make Alan Shepherd Jr. the first American man in space on May 5, 1961. 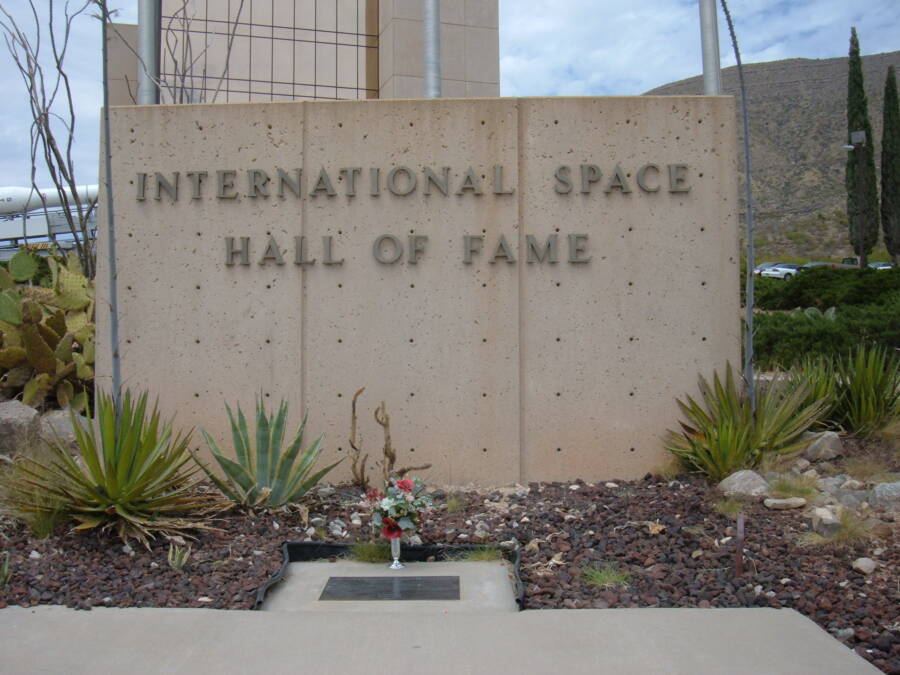 Wikimedia CommonsHam, the first chimp in space, is buried at the International Space Hall of Fame.

Ham was transferred to the National Zoo in Washington, D.C. in 1963 and spent 17 years in solitude. He then spent three years at the North Carolina Zoo in the company of other chimps before dying on Jan. 19, 1983 at age 25, young for a chimpanzee. The Smithsonian Institution hoped to put his body on display before public outrage forced them to reconsider.

“Talk about death without dignity,” wrote The Washington Post. “Talk about dreadful precedents — it should be enough to make any space veteran more than a little nervous about how he is going to be treated in the posthumous by and by.”

After an autopsy, Ham’s skeleton was removed and is today kept in the National Museum of Health and Medicine in Maryland. The rest of his remains were buried at the International Space Hall of Fame in Alamogordo, New Mexico — where it all began.

“Alan Shepard was a hero, no doubt about that,” Ralph Morse, who photographed Ham for LIFE, said. “But whenever people call Shepard the first American in space, I like to remind them of a chimpanzee who beat him to it.”

After learning about Ham the chimp, read the incredible stories of the other first animals in space. Then take a look at 44 vintage NASA photos that define the Space Age.