In 2013, a synthetic stimulant called flakka emerged in Florida — and wreaked havoc on users with its horrific side effects. 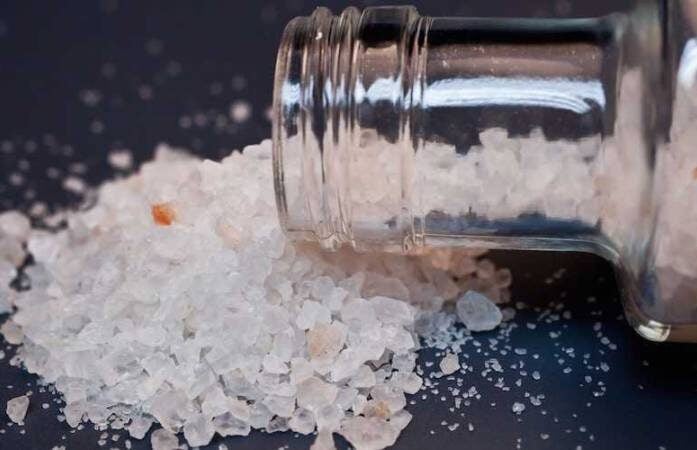 Drug Enforcement AdministrationThe effects of flakka are so gruesome that the U.S. put a ban on 116 different Chinese substances used to make it.

It started in Jupiter, South Florida, on Aug. 15, 2016. That evening, 19-year-old college sophomore Austin Harrouff was dining with his family at a restaurant.

The trouble began when Harrouff abruptly walked out of the restaurant. His parents soon found him at his mother’s house, attempting to drink cooking oil. They then dragged him back to the restaurant, but it wasn’t long before he walked out again. The consequences would be far worse this time.

After leaving the restaurant at approximately 9 p.m., Harrouff walked three-and-a-half miles north toward his father’s house in the neighboring town of Tequesta. At about 10 p.m., just before reaching the house, Harrouff happened upon the home of middle-aged couple John Stevens and Michelle Mishcon sitting out in their garage.

The Stevens’ neighbor, Jeff Fisher, called 911 after going over to investigate the commotion in the darkness. He believed that he had been stabbed — and all he could really tell the operator at the time was, “There is a girl laying on the ground. He beat her up. I ran over there. I’m bleeding profusely here at the moment.” 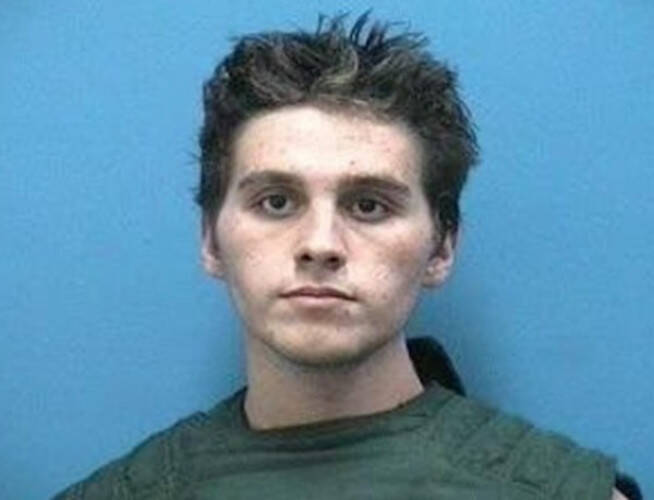 By the time the police reached the scene at about 11 p.m., they found Stevens and Mishcon stabbed to death and Harrouff aggressively gnawing at the former’s face.

But that night, Harrouff himself suggested the underlying factor most quickly assumed to be the root of this “random” attack. “Test me,” Harrouff told officers at the scene. “You won’t find any drugs.”

Authorities took samples of Harrouff’s hair, DNA, and blood, and sent them to the F.B.I. for drug testing. But media outlet after media outlet immediately suspected that the culprit was a drug called flakka. 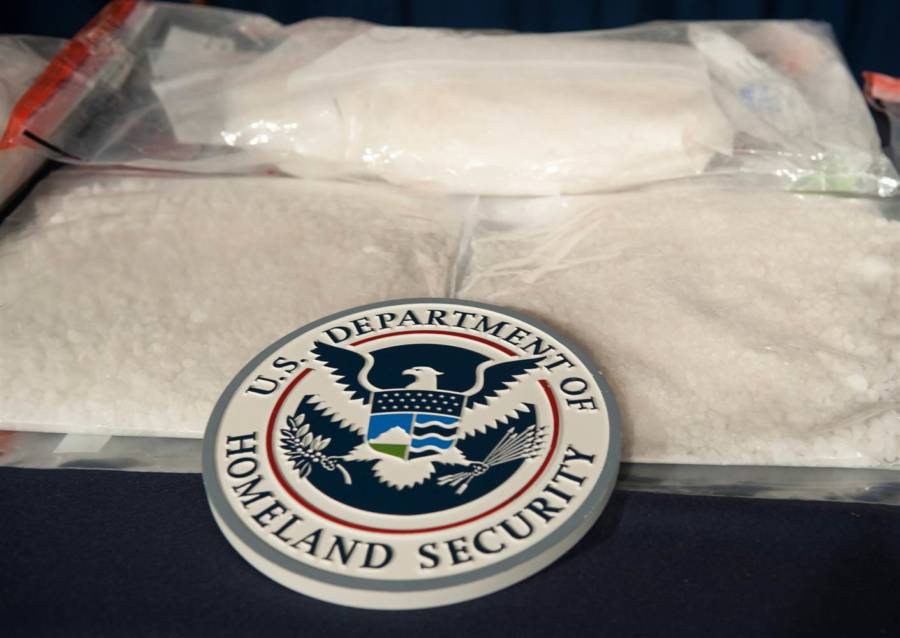 U.S. Department of Homeland SecurityBecause the effects of flakka are so potent, between September 2014 and December 2015, 63 people died from overdoses.

Flakka seemed to make its media debut in Florida in 2016, but it perhaps reached its apex with the case of Austin Harrouff.

But what, exactly, is flakka and why has it made headlines?

Like “bath salts” — the other grisly crime-inducing drug that saw a sharp rise in popularity a few years ago — the flakka drug is technically known as alpha-pyrrolidinopentiophenone (alpha-PVP), a type of synthetic cathinone.

This dangerous class of drugs gets its kick from manmade compounds chemically related to cathinone, a derivative of the khat shrub. For thousands of years, people have chewed the shrub’s leaves for their psychoactive effects in the plant’s native North Africa and Saudi Arabia. 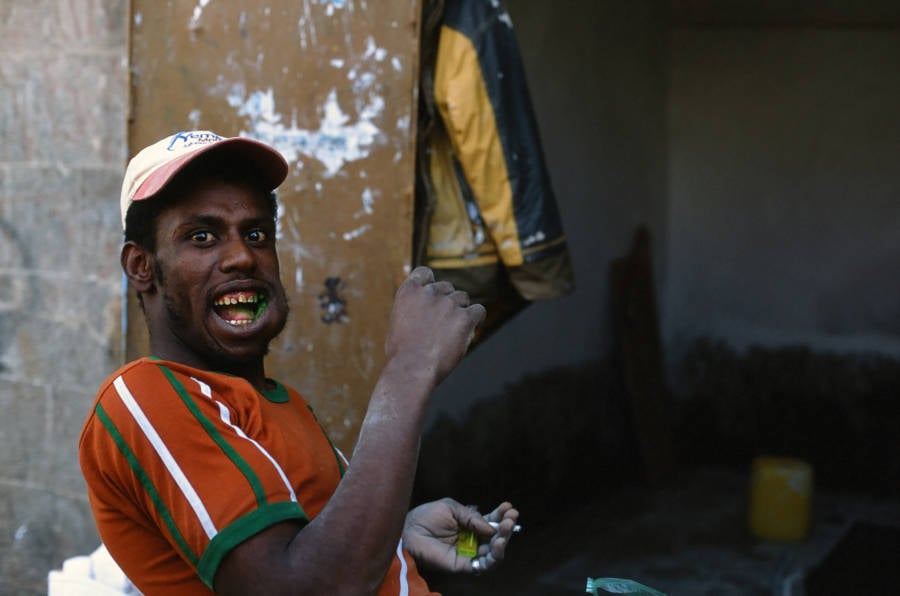 While it’s both relatively little-known and almost universally illegal in the West, khat has long been and still is openly and legally used in its native region.

There, authorities like the World Health Organization estimate that each day, more than 10 million people take advantage of the “state of euphoria and elation with feelings of increased alertness and arousal” that the drug causes.

The synthetic compounds based on khat are much more recent. First invented in the 1960s, these compounds contort that euphoria and arousal into something far darker. And all of flakka’s devastating delirium and aggression start with a simple white or pink crystal.

According to the National Institute on Drug Abuse, these foul-smelling crystals can be eaten, snorted, injected, or vaporized, the latter of which is the most dangerous method as it sends the drug directly into the bloodstream at unparalleled speeds.

No matter the method used, what’s perhaps most worrisome about the flakka drug is its extraordinarily small price tag: between $3 and $5 per dose. This has helped make the flakka drug popular, especially among the young and the poor, and especially after “bath salts” were widely banned in 2011 and many users thus needed a replacement.

What Are The Effects Of Flakka? 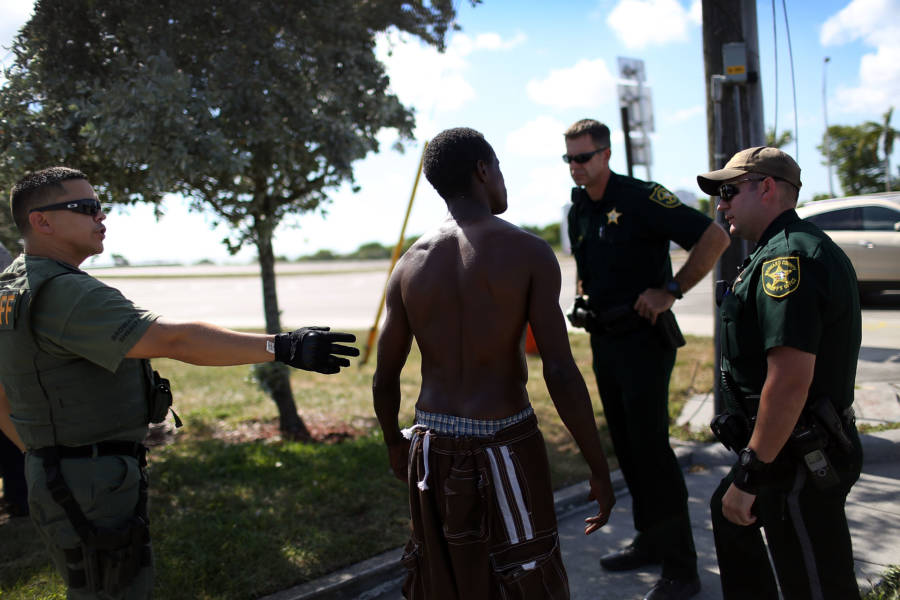 Joe Raedle/Getty ImagesBroward Sheriff’s Office deputies deal with a man who was suspected of being under the influence of flakka on June 17, 2015 in Pompano Beach, Florida.

“They come in hot, crazy, insane, out of their mind and then on top of that, fast heart rate and high blood pressure,” El Sanadi continued. “I would say of all the drugs I’ve seen — cocaine, amphetamines, heroin, Oxycontin — this is the absolute worst.”

Likewise, that same NBC News report reads, “A single dose smoked, swallowed or snorted can give a user a potent but fleeting rush — or turn them into a paranoid zombie with superhuman strength.” 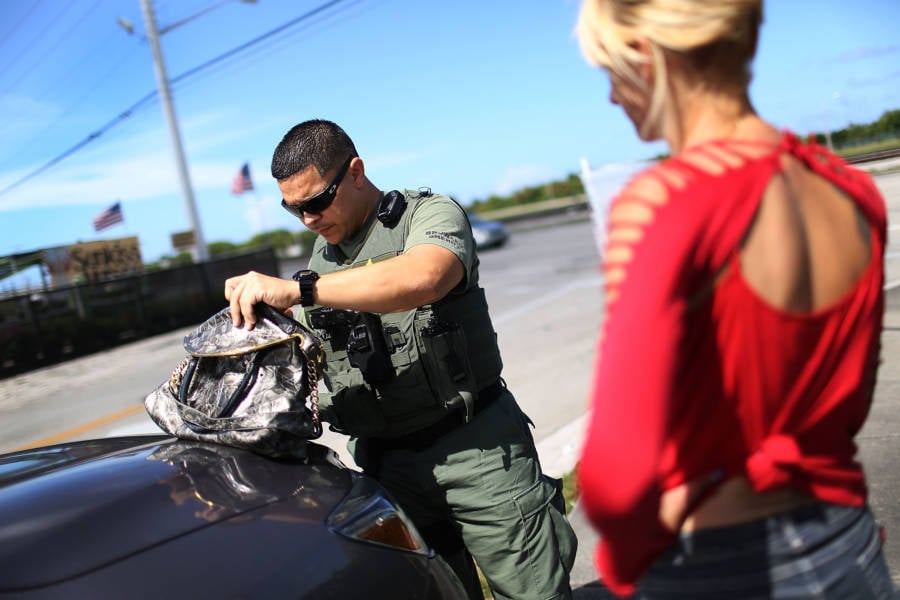 Joe Raedle/Getty ImagesA Broward sheriff checks a woman’s purse to see if she is carrying flakka on June 17, 2015 in Deerfield Beach, Florida.

According to the National Institute on Drug Abuse, flakka and other synthetic cathinones affect the body in a manner that is similar to cocaine but about ten times more powerful.

Thus, there are cases as violent as Austin Harrouff, and sometimes as unhinged as a 37-year-old Floridian identified only as Stephanie. NBC News reported that upon her very first experience with the flakka drug, she hallucinated that she was being chased. She then ripped off her clothes and jumped three stories off a bridge and into the water below.

“I just remember being in the water and feeling like I could breathe underwater,” she said. “I remember having seizures and having just continued paranoia and feeling like people were chasing me and following me and talking about me. And I still suffer from nightmares and have to take medication for that.”

But nightmares and medication might be the least of a user’s worries. The flakka drug is highly addictive, and with repeated use comes the risk of devastating longer-term consequences including depression, insomnia, paranoia, kidney failure, heart failure, and death.

And some of the more appalling flakka incidents are just as tragic as all those physiological and psychological effects suggest.

What Are Flakka Users Capable Of? 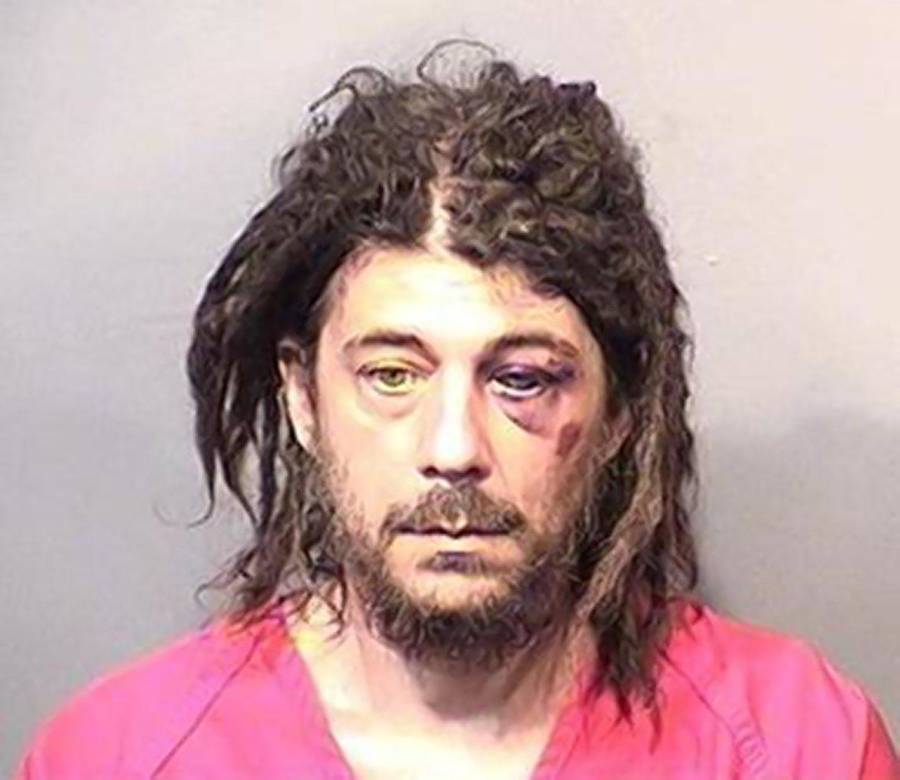 Brevard County SheriffKenneth Crowder attempted to have sex with a tree while under the effects of flakka.

The case of Austin Harrouff is almost certainly the most tragic of all the flakka drug stories, yet it’s hardly the most bizarre. Over the past several years, dozens of cases have made headlines and helped make the flakka drug as feared as it is today.

There was the January 2015 case of Leroy Strothers, who stripped naked and brought a gun to the roof of a south Florida apartment building where he proclaimed that someone was trying to kill him before finally being subdued.

The following month, a man named James West attempted to kick in the hurricane-proof glass doors of the Fort Lauderdale Police Department headquarters because he feared that 25 cars were chasing him down the road. The next month, another man impaled himself on the spiked fence of that very same police building. 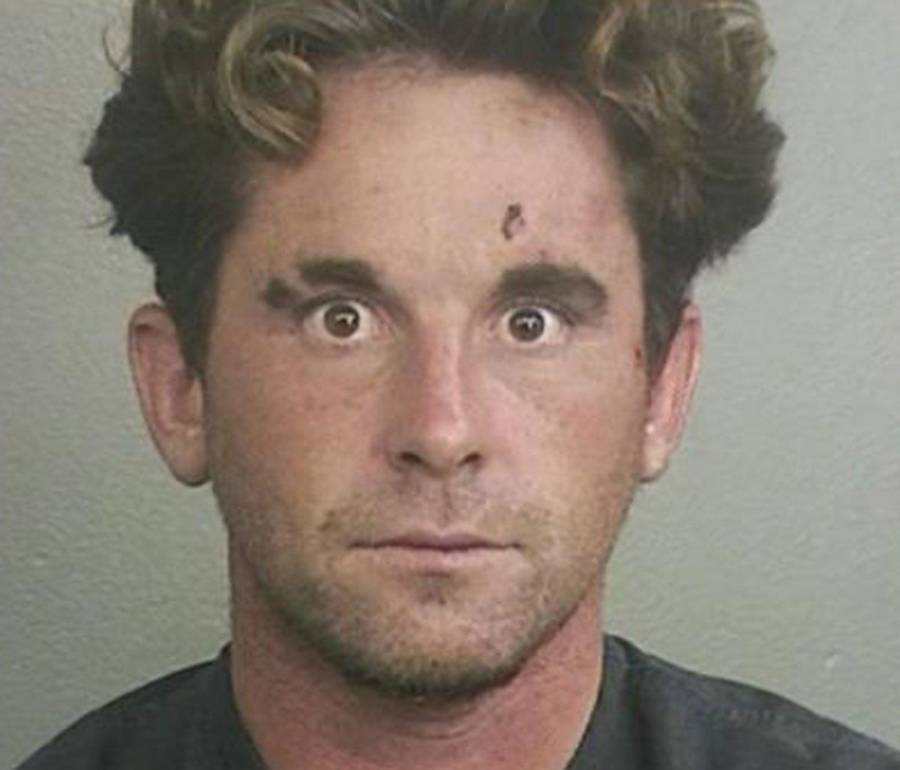 Fort Lauderdale PoliceMatthew Kenny, who ran naked through a central Florida town due to the effects of flakka.

A month after that, a man named Matthew Kenny ran naked across a major highway in south Florida in the hopes that a car would hit him so that his imaginary pursuers would stop chasing him.

That same month, in April 2015, Kenneth Crowder ran naked through a central Florida town and attempted to have sex with a tree before attacking the officers who had come to subdue him, at which point he declared himself both God and Thor.

Finally, in May, a nude 17-year-old girl jumped through the window of a stranger’s home and then, covered in her own blood, approached officers while repeatedly yelling, “I am God,” and “I am Satan.”

And that was just the first wave of cases that put flakka on the national radar. Since then, both authorities and the media have labeled the flakka problem an “epidemic.”

But just how bad is this problem?

What’s The Future Of The Drug? 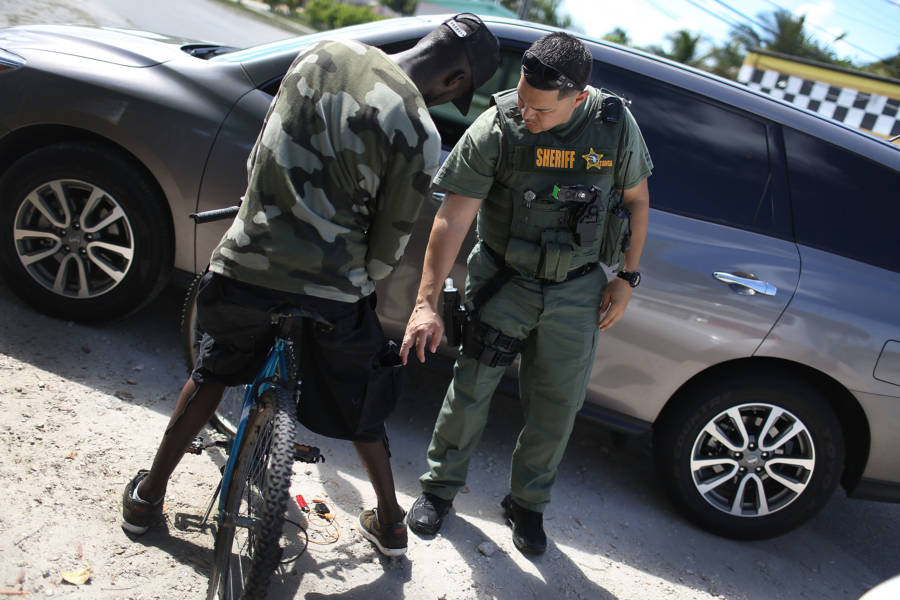 Joe Raedle/Getty ImagesA Broward sheriff stops a man to see if he is carrying flakka on June 17, 2015 in Deerfield Beach, Florida.

The flakka “epidemic” — in as much as it is one — is not a national one. Florida, particularly southeastern Florida, has seen the vast majority of cases.

According to NBC News, “Floridians say it’s the worst drug crisis they have seen since the crack-cocaine epidemic of the 1980s.”

“At the height of the flakka craze, you were almost praying for crack cocaine to come back,” Don Maines, a drug treatment counselor with the Broward County sheriff’s office told The Washington Post. And the numbers make it easy to see why.

In Broward County alone, the number of flakka samples authorities tested in connection with crimes or deaths went from seven in 2013 to 576 in 2014 and to more than 900 in 2015, according to NBC. Dr. Nabil El Sanadi likewise told NBC that his facility saw 25 to 30 flakka patients a day in late 2015.

Along with a few cases reported in Ohio, Texas, Kentucky, Tennessee, Illinois, and several others, in the U.S. flakka saw a whopping 780 percent increase in cases between 2012 and 2014.

However, the total number of 2014 cases nationwide was still “only” 670. Luckily, Broward County hospital admissions for flakka went from 306 in October to 54 in December, and stayed down, with no flakka-related deaths occurring over the first third of 2016.

As of 2019, the drug had caused several deaths across Ohio and Utah, and 1 percent of American teens admitted they had tried it. 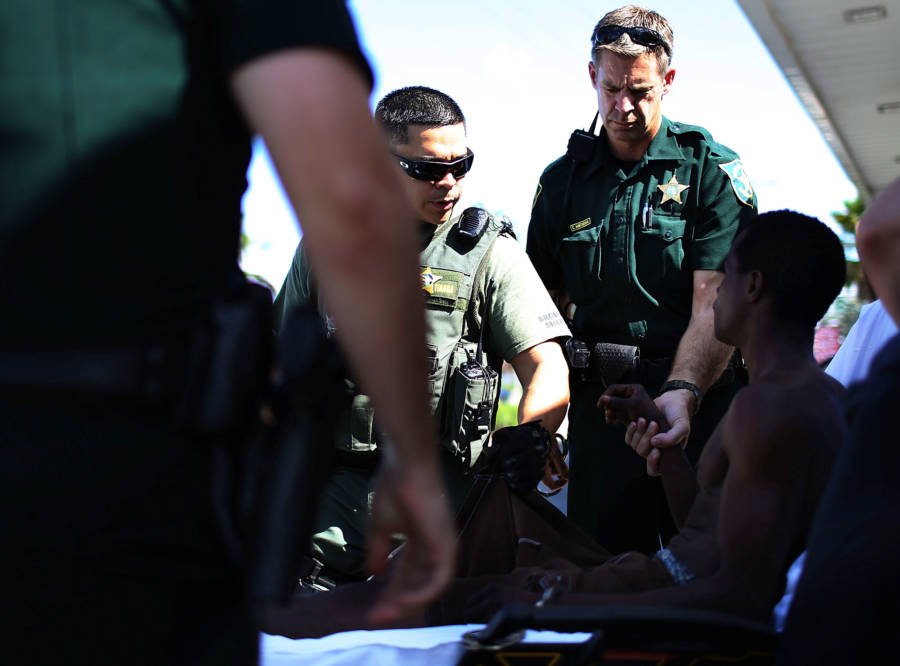 Joe Raedle/Getty ImagesBroward Sheriff’s Office deputies help Broward County Fire Rescue prepare to transport a person suspected of being under the influence of flakka on June 17, 2015 in Pompano Beach, Florida.

Many attribute the fall in flakka deaths to a ban that the United States Drug Enforcement Administration put on it in March 2014. Though dealers could still get reliable, cheap flakka from China, the country promptly banned 116 synthetic substances including the flakka drug following immense pressure from the U.S.

Just like that, it seemed the effects of the flakka epidemic had swiftly ended.

But it may be tough to keep the drug at bay for long because it’s also extraordinarily profitable. As Robert Hutchinson, acting special agent in charge of Homeland Security Investigations in Miami, told NBC News in late 2015, the drug can be purchased overseas for $1,000 to $2,000 a kilogram by dealers who can then break it up into doses and ultimately make $40,000 to $50,000.

Moreover, even if some enterprising American dealers don’t find another overseas flakka source, another drug will soon take its place.

“Illegality may not matter in the long run,” Rolling Stone wrote in conversation with Dr. Indra Cidambi, an addiction expert at the Center for Network Therapy. “Drug producers will alter the chemical structure of flakka ever so slightly to circumvent the law. It’s how MDMA — or Molly — led to bath salts.”

“You wait for a couple of weeks and then you get something else,” added Cidambi.

But whether or not the flakka epidemic is indeed over, the damage, in every sense, is done.

After this look at the effects of the flakka drug, discover the horrors of krokodil, the Russian zombie drug. Then, discover devil’s breath, the Colombian powder more terrifying than cocaine.