On Sept. 10, 1977, Tunisian immigrant Hamida Djandoubi became the last victim of a guillotine execution in French history — 38 years after Eugen Weidmann's riotous beheading made him the final guillotine victim killed in public. 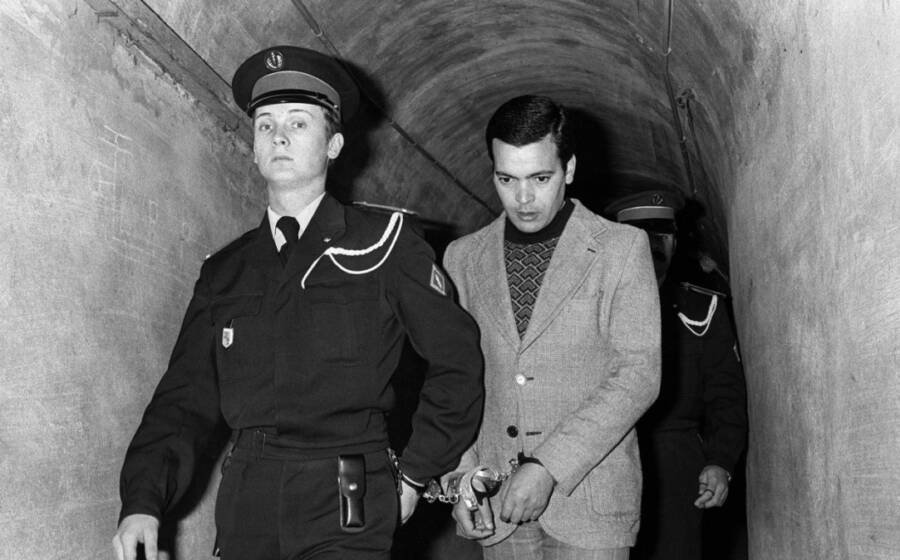 GERARD FOUET/AFP via Getty ImagesOn Feb. 24, 1977, Hamida Djandoubi arrives at his trial via a tunnel connecting the courtroom to the Aix-en-Provence prison.

When you think of a guillotine execution, you probably think of Marie Antoinette or King Louis XVI. After all, public beheadings were all the rage in France back in the 1700s when they served as an effective way to both execute someone and make a public statement.

Furthermore, public beheadings were a popular form of entertainment. But what’s likely surprising is that this was true all the way into the 20th century.

France’s last guillotine execution in public came as recently as 1939, when serial killer Eugen Weidmann was beheaded in front of a crowd of hundreds. However, the onlookers grew so riotous that France decided to ban all public beheadings henceforth.

However, that didn’t stop the country from using the guillotine behind closed doors. In fact, the beheading of Hamida Djandoubi marked the last guillotine execution in French history — and it was carried out on Sept. 10, 1977. That’s a whole five months after the first Star Wars movie debuted in theaters, and around the same time that kids around America were waiting to get their hands on a brand new Atari gaming system.

Discover the grisly stories of France’s final guillotine execution and the bloody spectacle 40 years earlier that forced the country to stop beheading people in public.

Hamida Djandoubi was a Tunisian immigrant to France who was found guilty of the kidnapping, torture, and murder of his girlfriend, French citizen Élisabeth Bousquet. After he was sentenced to death in February 1977, he appealed twice — but to no avail.

Unable to change his fate, he was executed at 4:40 a.m. on Sept. 10 in the courtyard of the Baumettes Prison in Marseille. Once the blade fell, he became the victim of the final guillotine execution in French history.

By the time of the execution, both public and government support for beheadings and capital punishment in general had been dwindling. And the macabre details of Hamida Djandoubi’s death only made things worse.

According to reports that eventually became public, a doctor present at the execution testified that Djandoubi remained responsive for about 30 seconds after decapitation. Within four years, capital punishment in France was no more.

Though Hamida Djandoubi’s execution was highly publicized, he was executed behind closed doors — and that’s because of laws imposed following the 1939 beheading of another man named Eugen Weidmann.

The Riotous Beheading Of Eugen Weidmann 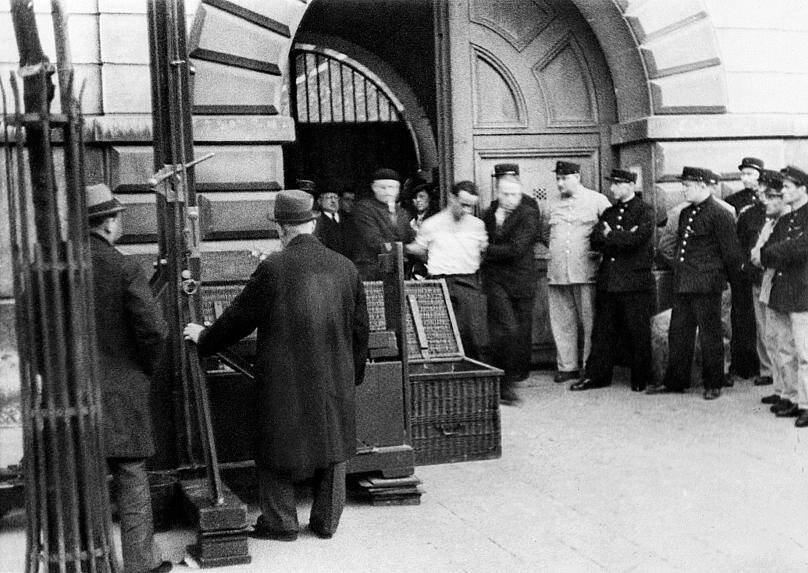 STF/AFP via Getty ImagesEugen Weidmann is marched to the guillotine in Versailles on June 17, 1939. His beheading marked the last guillotine execution in public in French history.

The beheading of Eugen Weidmann on June 17, 1939 was France’s last guillotine execution performed in public — and with good reason.

Eugen Weidmann was a German convict who moved to France in the early 1930s looking for a way to get rich quick. Along with two of his friends, Weidmann rented a villa in Saint-Cloud, Paris. There, the three men would kidnap rich tourists and steal their money and valuables before ultimately murdering them.

In early 1939, Weidmann was arrested along with his companions. The two other men were either acquitted of the charges or sentenced to prison time, but Weidmann was not so lucky. He was given the maximum sentence and ordered to be executed via guillotine in full view of the public outside the prison in Versailles.

However, the execution sparked mass chaos and the “hysterical behavior” exhibited by the hundreds of onlookers caused French president Albert Lebrun to immediately declare that all future executions be held out of public view.

The crowd was reportedly anything but sober and reserved, with some spectators said to have used their handkerchiefs to soak up some of the victim’s blood as a souvenir.

According to actor Christopher Lee, coincidentally in attendance with a journalist friend of his, a “powerful wave of howling and shrieking” broke out before the execution. Then, he remembered, “I turned my head, but I heard” and onlookers soon “rushed to the corpse” and some “did not hesitate to soak handkerchiefs and scarves in the blood spread on the pavement, as a souvenir.”

Wanting to end spectacles like these and not wanting news of such events to spread overseas, President Lebrun put a stop to public beheadings once and for all. 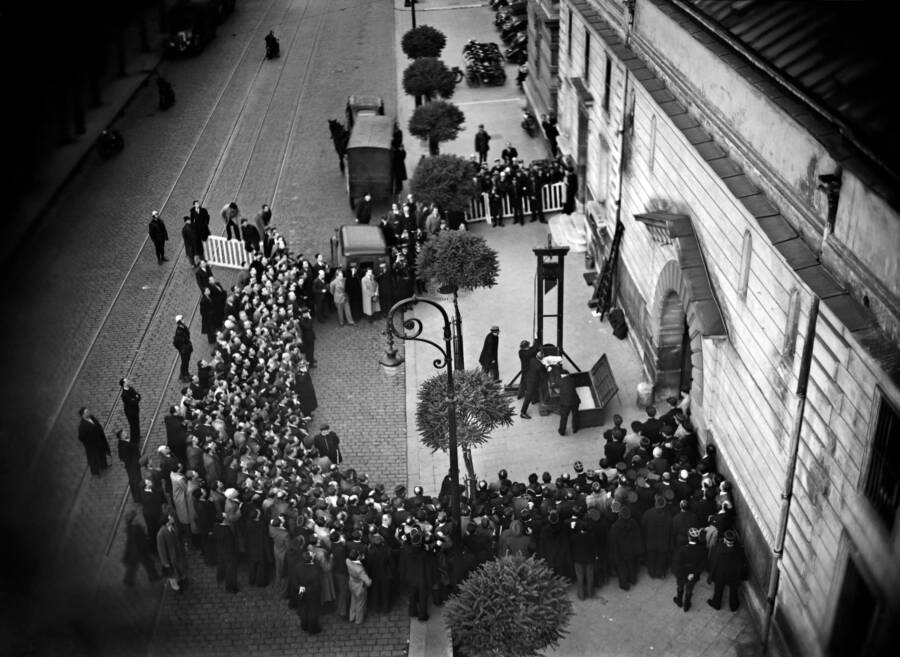 STF/AFP via Getty ImagesOn June 17, 1939, outside the Saint-Pierre prison in Versailles, crowds gather to watch the beheading of Eugen Weidmann, the victim of the last guillotine execution performed in public in the history of France.

And while Eugen Wiedmann’s beheading was the final guillotine execution performed in public, the method was still used behind closed doors for another four decades. Finally, with the 1977 death of Hamida Djandoubi, the centuries-old tradition of beheading criminals with a giant falling blade was brought to an end.

After this article about Hamida Djandoubi, Eugen Weidmann, and France’s last guillotine execution, read about Charles Henri Sanson, the royal executioner of 18th-century France. Then, learn all about the grisly death of Marie Antoinette.