What’s The Happiest Country In The World? The Answer Might Surprise You

You’ll read and share plenty of stories claiming to have uncovered the happiest country in the world (or state in the U.S., and so on). By now, there’s a veritable cottage industry of such stories. But in the last few years, during which these stories became commonplace, one study stands out in terms of authority: the World Happiness Report.

Produced annually since 2012 by the United Nations’ Sustainable Development Solutions Network, the report uses a multifaceted polling system to create an overall happiness score (on a scale of 0 to 10) for each country (see more on the methodology below).

Whatever you make of its methods and its validity, the World Happiness Report is most likely the best of its kind in determining the happiest country in the world — and much, much more. We’ve combed through the most recent report to answer all the big questions you may have about happiness around the world…

So What’s The Happiest Country In The World?

The top 20 happiest countries in the world, accompanied by their 0 to 10 happiness score. Image Source: World Happiness Report 2016

The top ten happiest are the same as they were last year, but in a slightly different order. This year, Denmark has taken the top spot.

What’s so great about Denmark?

Like all the other countries near the top of the list, Denmark doesn’t rank especially high on any single factor, but instead simply puts in a strong showing across all of the main six factors that were considered: GDP per capita, social support, healthy life expectancy, freedom to make life choices, generosity, minimal perceived corruption.

The United States, once again, ranks just outside the top ten, at number 13, two spots higher than last year (more on that below).

What’s The Unhappiest Country In The World?

The top 20 unhappiest countries in the world, accompanied by their 0 to 10 happiness score. Image Source: World Happiness Report 2016

It’s highly likely that most of us, sadly, know very little about these countries offhand. What’s just as sad is that we likely do know enough about these countries to not be surprised that they rank at the bottom. Certainly, we can intuitively understand why the war-ravaged Middle East and sub-Saharan Africa would rank so low.

In fact, most of your regional assumptions about happiness are probably correct…

What Are The Happiest And Unhappiest Regions? 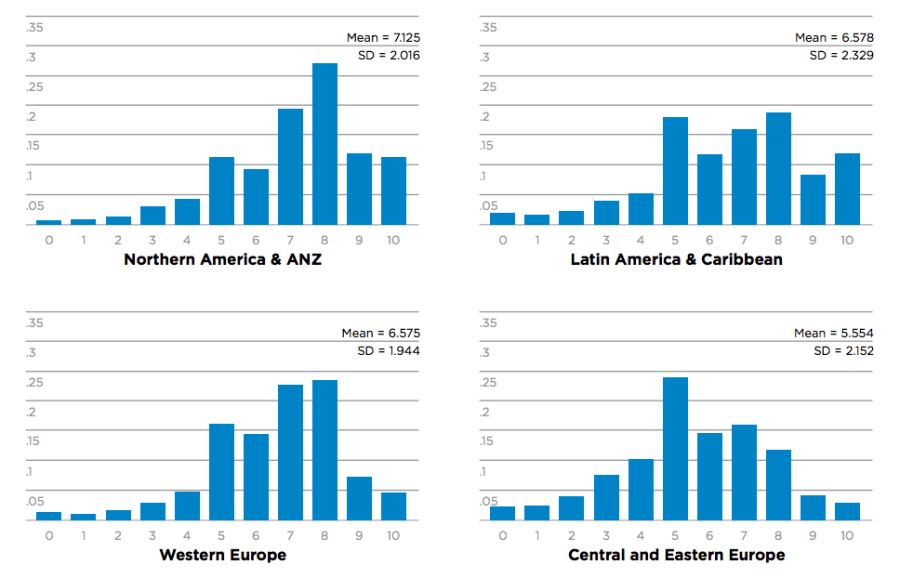 The world’s four happiest regions, based on the distribution of happiness scores (0 to 10). Image Source: World Happiness Report 2016

Based on even the most cursory knowledge of standards of living, few will be surprised that North America and most of Europe account for much of the world’s happiest regions. However, the presence of Latin America and the Caribbean might not be such a given, considering that, especially in recent years, the region is home to eight of the ten most murderous countries on Earth. 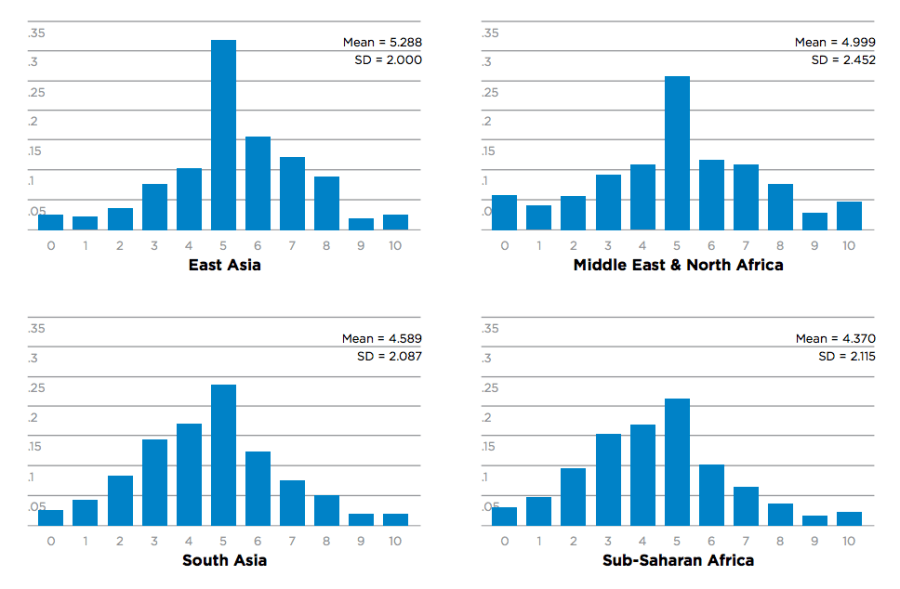 The world’s four unhappiest regions, based on the distribution of happiness scores (0 to 10). Image Source: World Happiness Report 2016

As above, it’s sadly no surprise that the Middle East and Africa rank so low. Of course, South Asia’s presence near the bottom might have something to do with the region’s mind-boggling population density, which goes hand in hand with its extreme poverty and income gap. And these are precisely the factors that are making much of the world less happy than it once was…

Which Countries’ Happiness Levels Have Changed The Most In Recent Years? 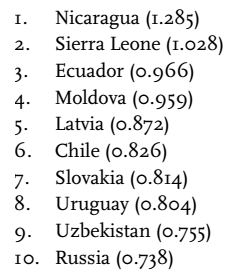 The top ten countries in terms of change in happiness level, accompanied by the change in the country’s overall happiness score. Image Source: World Happiness Report 2016

At the very least, perhaps we can take it as an encouraging sign that the three countries whose happiness levels have increased most in recent years are all from regions (Latin America and sub-Saharan Africa) that are, according to the report, deeply troubled (see above).

Elsewhere, while the United States ranked higher in happiness compared to other countries this year, its actual happiness score decreased from last year, a trend that’s been at work for about a decade now. In fact, since 2005, the United States’ decrease in happiness level is dramatic enough to place it in the bottom third of all countries surveyed, at number 93 out of 126 (with number 1 having the most change for the better and number 126 having the most change for the worse).

Coming in at number 126, with the biggest drop in happiness, is Greece. Given its financial problems and the stress placed on the country by the migrant crisis, this result is not at all surprising.

Is The Gap Between The Happiest And The Unhappiest People Widening?

The amount of increase or decrease in the gap between a given region’s happiest and unhappiest people when comparing 2005-2011 to 2012-2015. Image Source: World Happiness Report 2016

When you compare the last three years to the seven that came before, the gap between the happiest people and the unhappiest people in a given region is widening — by quite a bit. In fact, Latin America is the only region whose happiness gap isn’t widening. And, once again, Africa and the Middle East are suffering the most.

It hardly takes any leap at all to suppose that the widening happiness gap goes hand in hand with the widening income gap — which countless authorities, including the World Economic Forum, identify as the single biggest problem the world is facing today. But, that aside, the big picture isn’t as grim as you might think…

How Happy Is The World Overall? 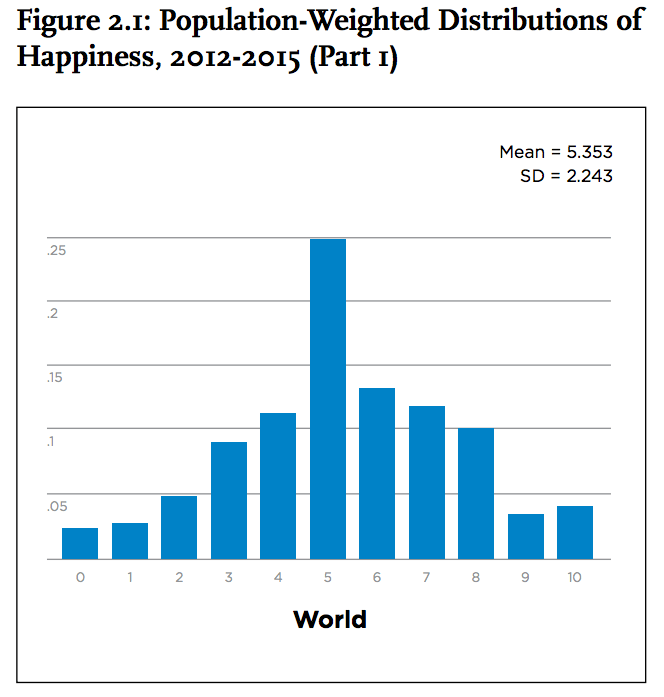 The amount of people by happiness score across the entire world. Image Source: World Happiness Report 2016

Many of us dive into studies like the World Happiness Report looking for bad news, confirmation that the world is going to hell. And whether it is or it isn’t — which isn’t something any report can definitively decide — the most big-picture result we can pull from the 2016 report is that the world appears to be more happy than not.

How Can We Be Happier?

What often gets lost with a report like this is the reason why it was done in the first place. We want to simply know the happiest country in the world — or the unhappiest — but it’s not as easy to think about how exactly we can make the world happier.

That may strike you as the mother of all open-ended questions, but the World Happiness Report does a fairly good job of teasing out happiness’ key factors and providing theories and goals for sustainable development that aims to increase happiness.

According to the report, the key issues we need to address appear to be, once again, income inequality, and the lack of secular ethics (according to the report: “a new ethics which incorporates the best values to be found in all religions, but which is equally convincing to people with no religious faith at all”). What the above graph (admittedly very limited in its sample size) hints at is a sea change that’s been at work for a few centuries now, even if we didn’t realize it.

In short, since the Enlightenment, organized religion has been slowly dying. But at the same time, an organized system of secular ethics hasn’t stepped in to the same degree that religious ethics have been phasing out. There’s obviously far more to unpack, in terms of this issue, and the report as a whole, which is available to read in full here.

After learning about the happiest country in the world, check out 25 maps that make sense of the world and maps that explain America.