Meet The Harpy Eagle, The Amazonian Raptor Named After A Greek Myth

With a 6.5-foot wingspan and talons the size of a bear's claw, the harpy eagle is a predator of epic proportions. But sadly, this majestic bird is now at risk of disappearing for good.

The harpy eagle is, perhaps, one of the most intimidating birds in the world. With its retractable feather crown and razor-sharp talons larger than bear claws, these “flying velociraptors” are easily one of the largest species of eagle in the world.

But in spite of their size and strength, their population has come under siege as the deforestation of the Amazon demolishes their habitat.

Now, scientists are implementing extraordinary tactics to save where the harpy eagle lives.

The Harpy Eagle Is A Killer Raptor 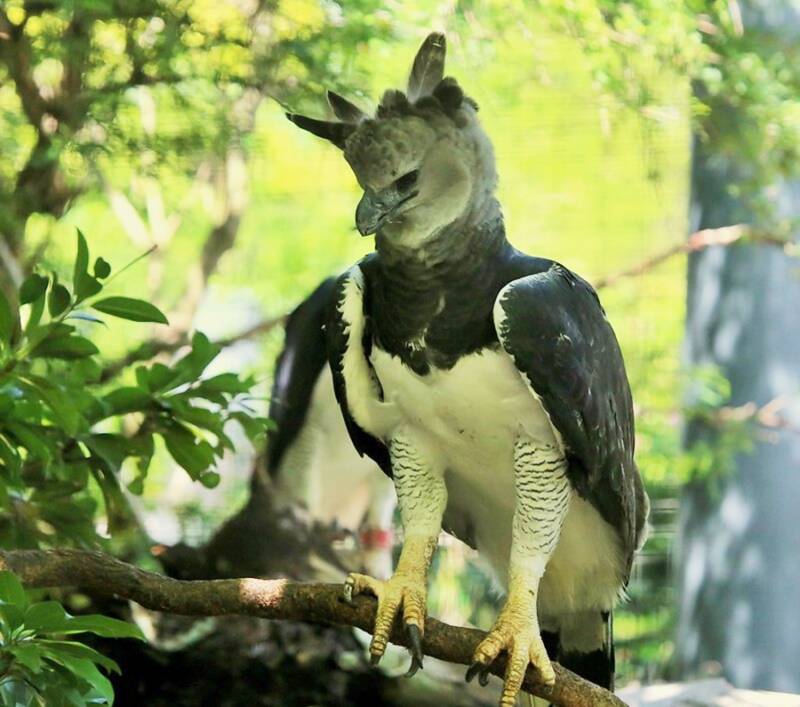 cuatrok77/FlickrThe harpy eagle is among the largest eagle species in the world.

The harpy eagle, or Harpia harpyja, is easily recognized by the mighty feather crowns they wear that rise whenever the bird is alarmed, making them look like scarier, larger versions of owls.

But make no mistake: these birds are categorized as raptors, meaning they are birds of prey with the ability to devour small animals that are comparable in size.

The sight of a harpy eagle in full defensive mode is such a frightening visual that it earned its name from the harpies of Greek mythology, which are terrifying hybrid beasts with the body of a bird and the face of a man. The first to describe the species was the famed Swedish botanist Carl Linnaeus, who dubbed the bird Vultur harpyja in his 1758 book Systema Naturae. 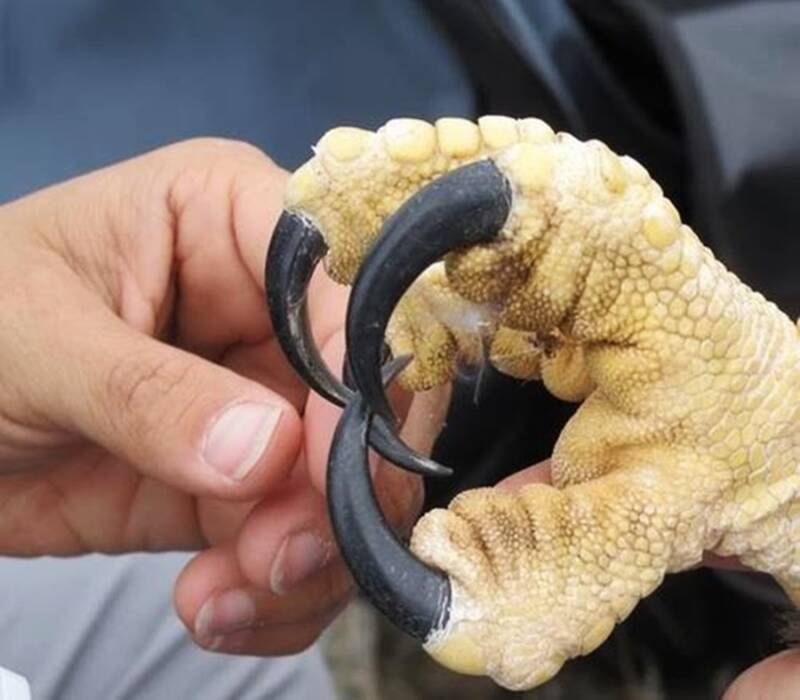 rulenumberone2/FlickrIts talons are larger than the claws of a grizzly bear.

Their original habitat stretches across Latin America, between Mexico and northern Argentina, where they typically nest among the treetops of the forest. The species is considered the Panamanian national bird.

Besides its black, grey, and white colors, a distinct feature of the harpy eagle is its size. They are among the largest eagle species found anywhere in the world. The females, like most eagle species, are much larger than the males and average between 13 to 20 pounds. The males, meanwhile, max out at around 12 pounds. 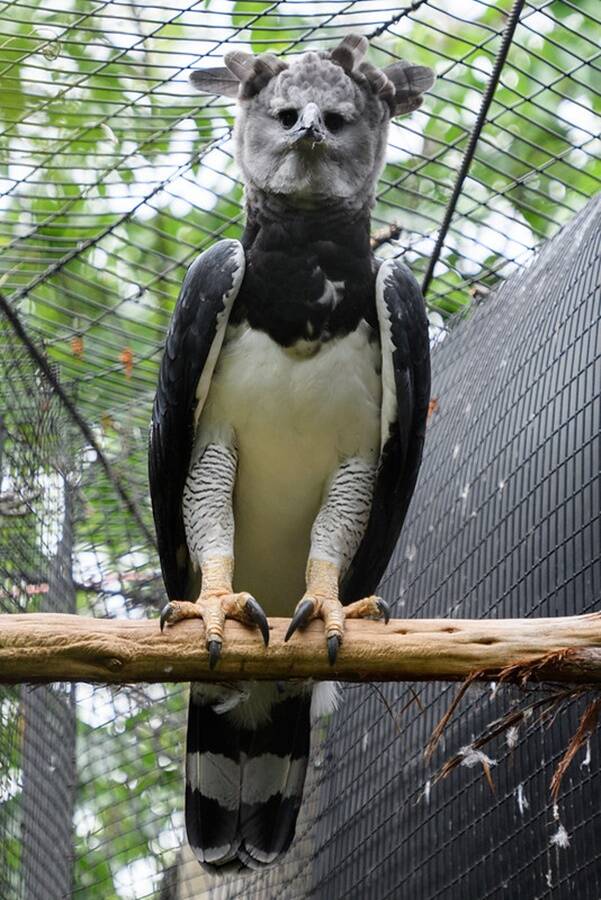 Eric Kilby/FlickrThese birds are strong yet agile predators, making them “flying velociraptors,” as one expert put it.

Their wingspan can reach up to 6.5 feet. While they’re shorter than other species their size, their impressive wingspan allows them to maneuver expertly up to 50 miles per hour amid the forest brush. They prefer to fly at mid-level instead of high above the treetops like many of their eagle cousins do. Their claws measure five inches in length, making them the largest eagle talons of any species.

By comparison, the harpy eagle is larger than the martial eagle, the largest bird of prey in Africa. But they are still no match in terms of body length and wingspan against the Steller’s sea eagle, which has a wingspan that reaches more than eight feet.

Harpy eagles are silent hunters so they rarely vocalize, choosing instead to ambush their prey. They like to prey on small mammals. The bigger females are even known to hunt down sloths and monkeys, weighty meals they can easily pick up off the ground or from the trees due to their impressive strength and agility.

Captive Breeding Efforts To Save The Species 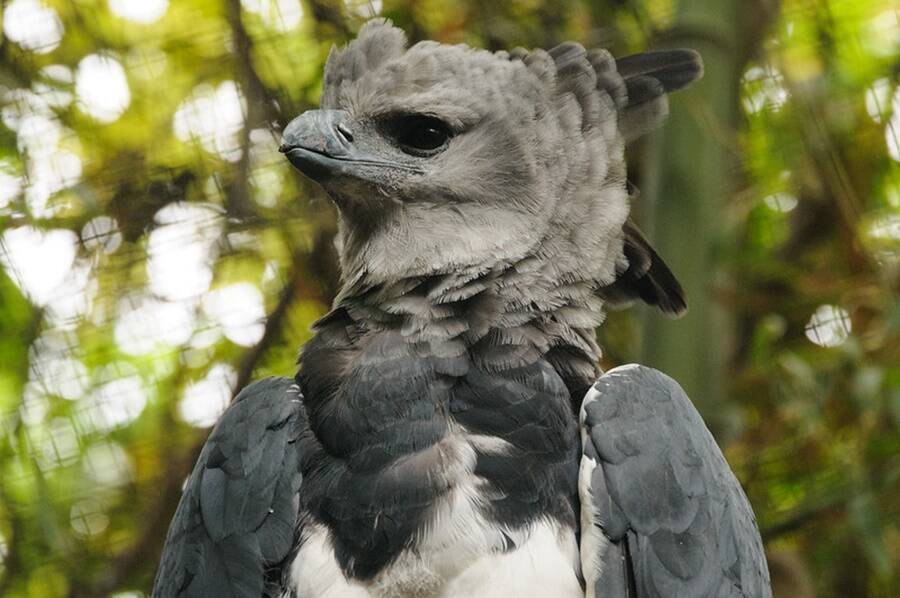 Eric Kilby/FlickrHarpy eagles are monogamous partners and slow breeders, laying a clutch of eggs every two to three years.

Harpy eagles are monogamous and are known to mate for life. They are slow breeders, and the females lay a couple of eggs at a time every two to three years.

Of the two eggs, only the first offspring to hatch usually survives until adulthood. This is because the first hatchling is showered with attention, leaving the other egg abandoned and unattended. Baby harpies are born all white and gain their dark coloring as they mature. 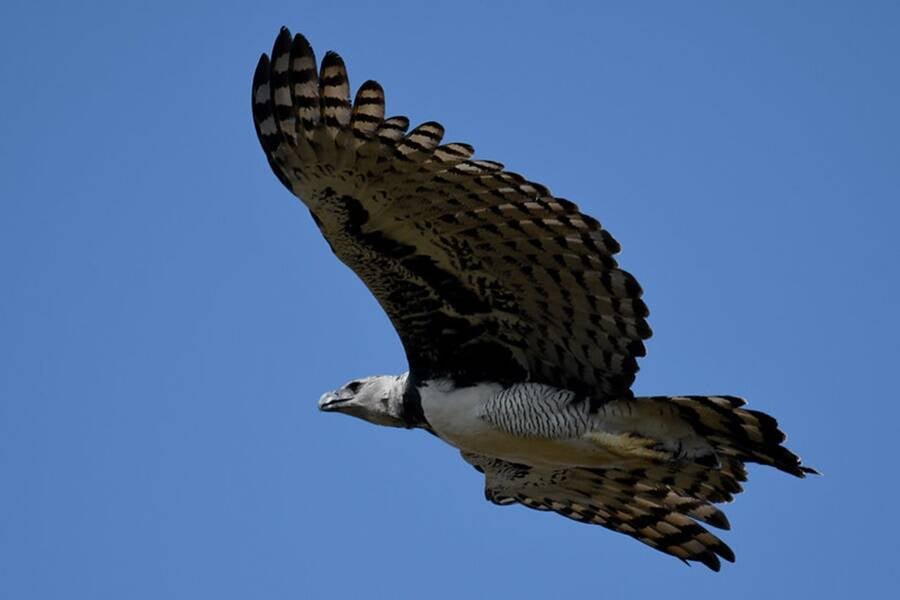 Brian Henderson/FlickrHarpy eagles don’t soar above the trees as their agility allows them to fly through the thick brush of the rainforest in search of unsuspecting prey.

Despite this, harpy eagle parents are quite dedicated to their offspring. The hatchling will hang around the nest for a year before they are finally ready to fly out on their own. Even after they’ve left the nest, though, a young harpy will fly back to its “home tree” every so often in the years after.

Looking at these massive birds, it’s hard to imagine how scientists would be able to breed them in captivity. But efforts have proven somewhat successful and — given their declining population — has become an important endeavor to preserve the survival of their species.

Harpy eagles are apex predators which means their well-being greatly affects their ecosystem.

In 1940, the first harpy eagles were shown in captivity at the San Diego Zoo. Nearly 50 years later, the zoo began breeding the harpies in captivity. A captive-bred male from Tierpark Berlin in Germany was transferred to the San Diego Zoo and paired with a female brought in from a zoo in Colombia.

The pair’s first chick was born in 1992 but died soon thereafter. But their second chick, a male born two years later, made history as the first harpy eaglet to be successfully bred and raised in captivity in North America.

Baby harpies have been born in captivity as recently as May 2020, when a harpy eaglet was born at the Bela Vista Biological Refuge in Brazil. It was the 50th harpy eaglet born at the facility, making it the largest reproduction center for harpy eagles in the world.

Why The Harpy Eagle Is In Danger Today 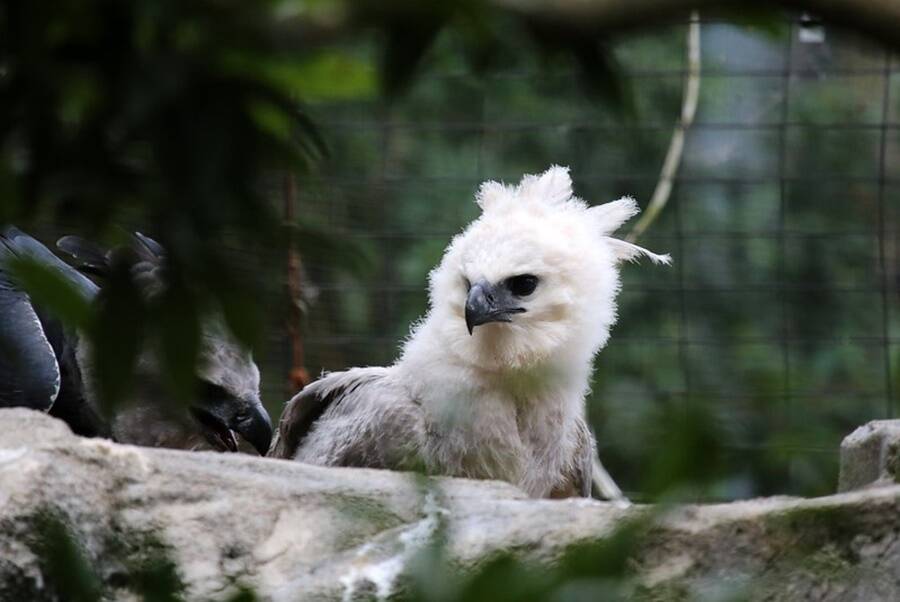 cuatrok77/FlickrYounger harpies are marked by their white feathers which turn grey and black as they mature.

As fearsome predators of the South American rainforest, harpy eagles may seem invincible. But in reality, the future of these majestic hunters is in jeopardy.

According to the Union for Conservation of Nature’s Red List of Threatened Species, which keeps track of animal species around the globe, the harpy eagle is categorized as a “near threatened” species.

This becomes even more concerning given that harpy eagles are apex predators, so their well-being greatly impacts the ecosystem they live in. Their tendency to prey on local monkeys, for example, keeps the primate population under control, which helps ensure the protection of the forest’s bird species since the monkeys prey on bird eggs.

With intensified deforestation happening throughout the bird’s known habitats all over South America, its total population has likely declined significantly. 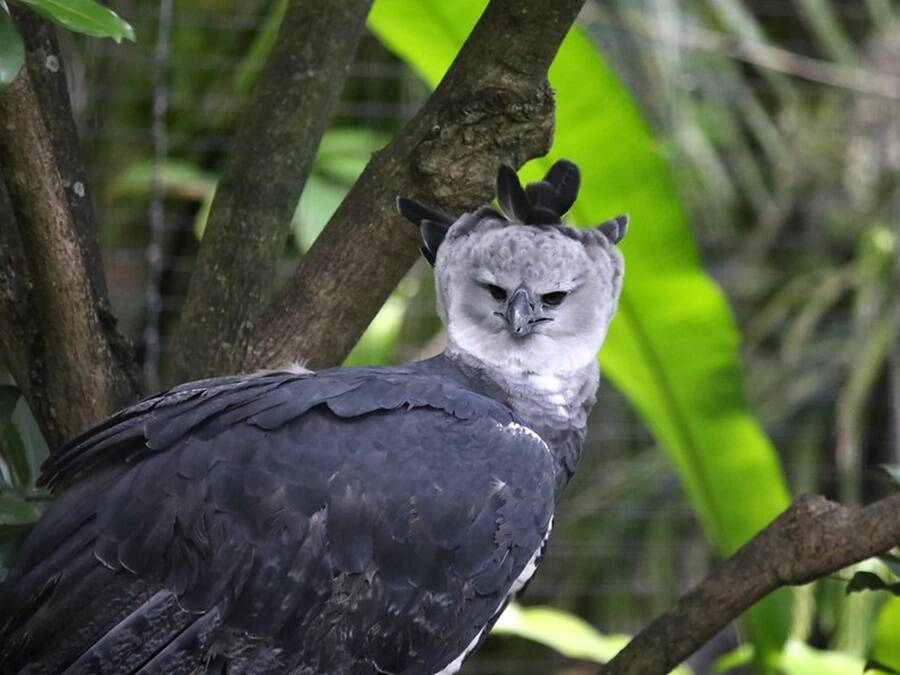 cuatrok77/FlickrThe harpy eagle derives its name from the half-bird hybrid creatures of Greek mythology — and given its legendary wingspan, it’s no wonder.

Roughly 93 percent of the harpy eagle’s habitat now exists within the Amazon. With 45 acres of the rainforest razed by private companies with beneficial ties to the Brazilian government, the situation isn’t looking good for these birds.

Furthermore, harpy eagles are not migratory birds. Because they stick to one territory during their lifetime, the health of where the harpy eagle lives is even more crucial as they cannot adapt to a different environment.

The species is categorized as ‘near threatened’ because where the harpy eagle lives is being diminished due to rampant deforestation.

Nonprofit conservation organizations like the Peregrine Fund have done important work to identify sites where the harpy eagle is known to still live. This is important so that conservation workers can setup perimeters of land inhabited by the bird that needs to be protected.

Other efforts by local biologists like Everton Miranda include launching educational campaigns about the species and collaborating with organizations like the Brazil Nut Collector Association. The association has helped researchers to identify harpy eagle nests while collecting their nut products in the forest.

These conservation efforts, combined with ongoing breeding programs, appear promising. But there is still much work to be done to make sure that the harpy eagle is kept safe. Even a terrifying predator straight out of Greek mythology deserves a shot at survival.

Now that you’ve learned about this massive raptor of Greek myth and where the harpy eagle lives, read about Haast’s eagle, New Zealand’s giant bird that went extinct 600 years ago. Then, meet the kakapo, the funny-looking and flightless “owl parrot” of New Zealand.