The Ancient City Of Hasankeyf Has Hosted 20 Cultures Over 11,000 Years, But Now It May Be Destroyed

Though Hasankeyf has more than 200 precious archaeological sites in its vicinity, the Turkish government wants to flood it in order to build a dam as part of an ambitious energy project.

The Byzantines, the Assyrians, the Romans, and the Mongols, are just some of the cultures to have left a substantial mark in modern-day Turkey’s ancient city of Hasankeyf. In total, some 20 cultures through each human epoch have chosen the city as a temporary settlement.

For this, Hasankeyf is considered an incredibly significant historical site. But a large dam project that was launched by the government in recent decades threatens to destroy the city’s archaeological treasures and displace tens of thousands of living residents. 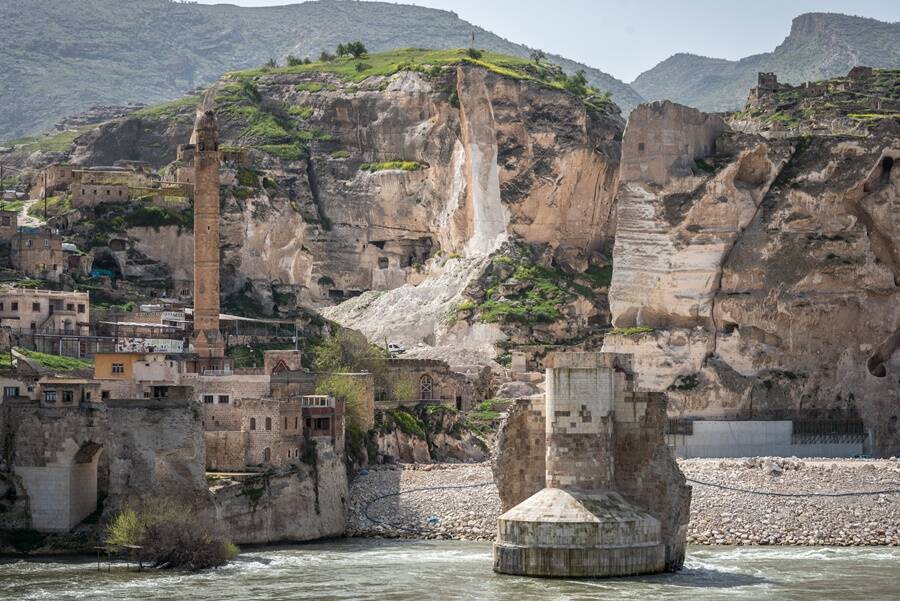 Diego Cupolo/NurPhoto via Getty ImagesHasankeyf was a hub of commerce along the Silk Road.

Looking at the city’s cave dwellings, carved precariously into limestone cliffsides, and its myriad (some 300) archaeological monuments, it’s no wonder why Hasankeyf has been deemed a historical treasure. Researchers estimate that Hasankeyf’s origins date back at least 11,000 years which makes it one of the earliest sedentary settlements in southeast Anatolia.

Hasankeyf sits on the left bank of the Tigris river and has seen the change of hands many times during the course of its storied past. Its earliest Neolithic settlers would have first stablished those cave homes, which the ancient Assyrians later called the Castrum Kefa or “castle of the rock” when they came to settle in the city.

Then around 300 A.D., a Roman fortress was built in the city, likely under orders from Constantine the Great. The fortress allowed the Romans to patrol their border with Persia and monitor the transport of goods.

At some point in the fifth century, Hasankeyf became the Byzantine bishopric of Cephe before it was conquered in 640 A.D. by the Arabs. They called it Hisn Kayfa, or “rock fortress” and established it as the Islamic medieval capital during this period. 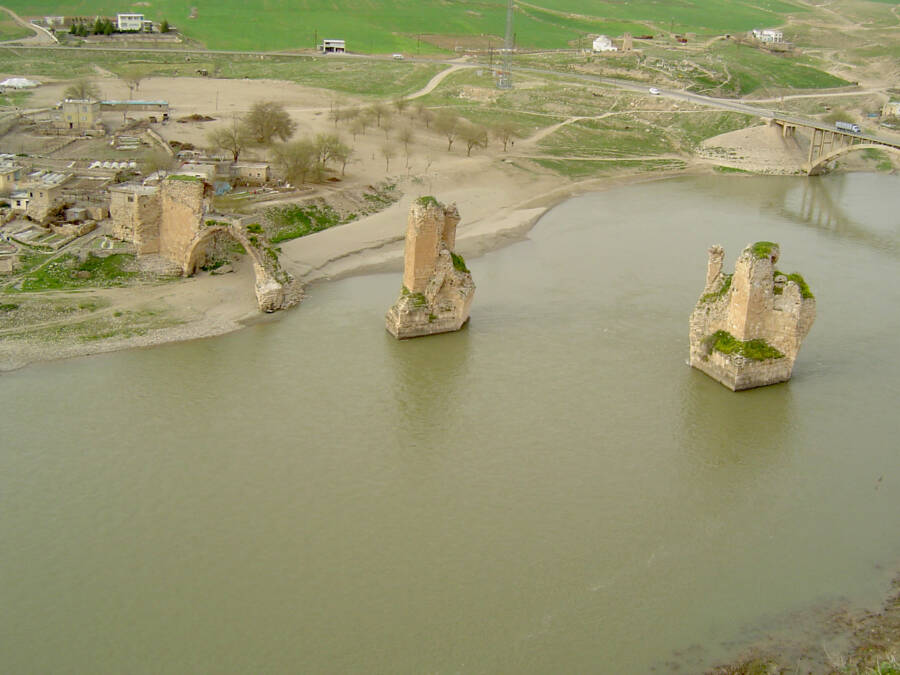 Wikimedia CommonsThe remains of a bridge built in the 12th century by the ancient Artukids that crossed the Tigris.

The Turkmen Artukid and Kurdish Ayyubid Islamic dynasties were next to move into the settlement. The Artukids built a bridge across the Tigris which was described by earlier travelers as “the grandest in all of Anatolia,” sometime between 1147 and 1172.

Hasankeyf was next ruled by the Mongols by 1260. Due to its desirable location right on the banks of the Tigris river, Hasankeyf morphed into an important hub of commerce and trade as part of the Silk Road during the early Middle Ages. By 1515, the city of Hasankeyf was absorbed into the Ottoman Empire.

All in all, an estimated 20 cultures have passed through Hasankeyf and left their cultural mark in some way, making it a living, evolving, museum of human history.

Modern Life In An Ancient City 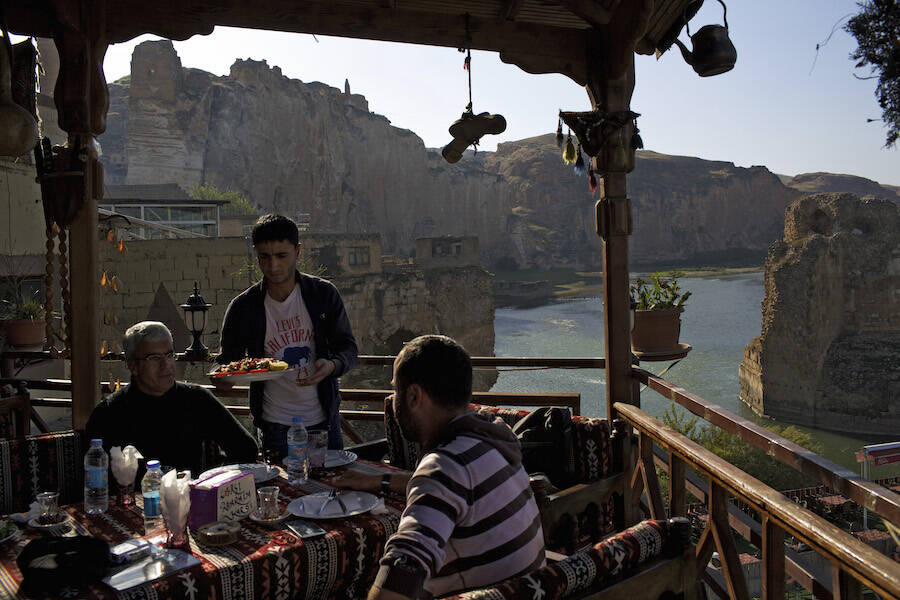 Hasankeyf has consequently become a mecca for researchers and historians who work to unearth the past. There are at least 300 individual and ongoing archaeological excavation sites in Hasankeyf to date.

Among the ancient city’s impressively preserved skyline are the ruins of the palace of the Artukid kings which dates back to the 12th Century.

There is also the El Rizk Mosque that was built in 1409 by the Ayyubid Sultan Suleiman with its ornately decorated minaret, and the ancient Tomb of Zeynel Bey which was constructed in the 15th Century and is recognized by its red brick body and turquoise tiles. 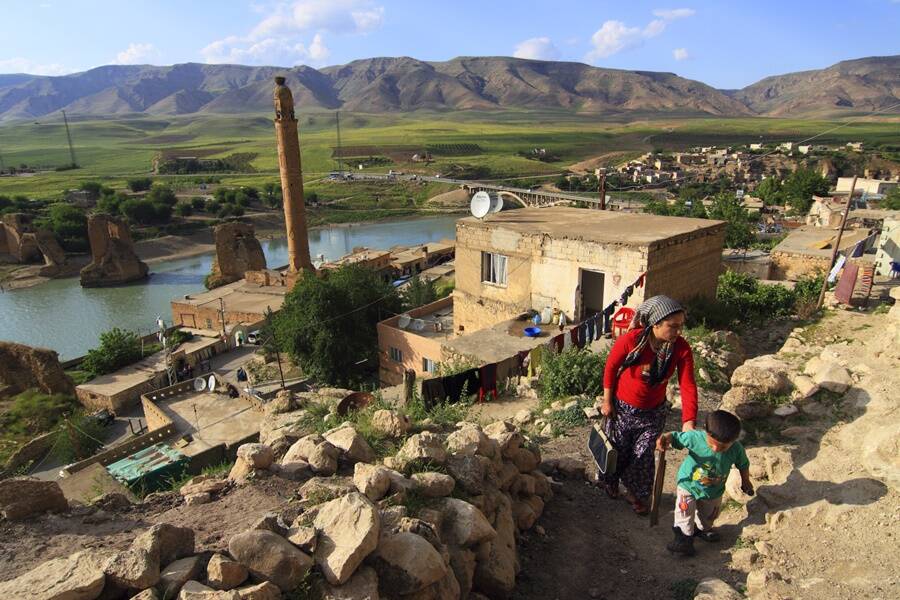 myLoupe/Universal Images Group via Getty ImagesDespite the proposed Ilsu dam that will undoubtedly flood the villages, Hasankeyf is still home to thousands of residents, most of them Kurdish families.

Miraculously, the giant tower fortress built by the Romans and the city’s Artukid bridge has also survived, even if only pieces.

If you visit the ancient city of Hasankeyf today, you will find a town that is steeped in rich history yet still very much alive. The carved-out cave dwellings along its limestone cliffs are mostly empty and used for storage, but a few families still live in some of them. There are an estimated 2,500 residents in Hasankeyf across 199 settlements.

Villagers are mostly Kurdish and some are Arab. Residents make a living from the modest tourism Hasankeyf’s rich history attracts by selling traditional southeastern Turkish fare and beverages right by the rock caves or along the Tigris river. There are also some quaint stalls in the old city market which offer rugs, clothing, and other goods.

An Archaeological Treasure Under Threat

Despite Hasankeyf’s history and the thousands of villagers who still live there, the ancient city could be destroyed.

In 2006, the Turkish government began work on a massive reservoir that would sit on the Tigris river. The Ilusi dam, as it has become known, would drown 80 percent of Hasankeyf in water, including the area’s unique rock caves and ancient monuments. 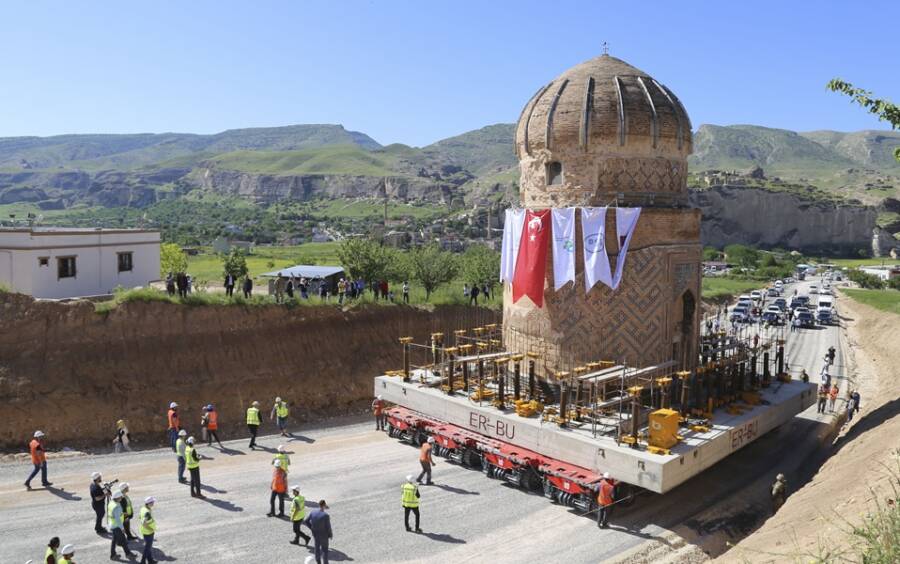 What’s more, the manmade dam, built at 453 feet, is expected to displace the 3,000 residents living in the Hasankeyf area, though some observers estimate a significantly higher number of people to be affected. The government did construct a new town for the displaced citizens to move into, though many are unhappy to leave as, in some cases, their families have lived in the ancient city for 300 years.

The hydroelectric Ilisu Dam is part of the government’s decades-long infrastructure plan to develop its severely underserved southeastern region in what is known as the Southeastern Anatolia Project or Guneydogu Anadolu Projesi, otherwise shortened to GAP.

“About 200 different sites will be affected by the Ilisu Dam,” Zeynep Ahunbay, a professor of architectural history at Istanbul Technical University, said of the energy project. “But Hasankeyf is the most visible and representative of all, due to its picturesque location and rich architectural content. It is one of the best-preserved medieval sites in Turkey.”

Pushback from researchers, many of whom are in the middle of excavation projects at Hasankeyf, environmental advocates, residents, and even local Turkish officials have spurred enough criticism that the project has faced road bumps in its financing. 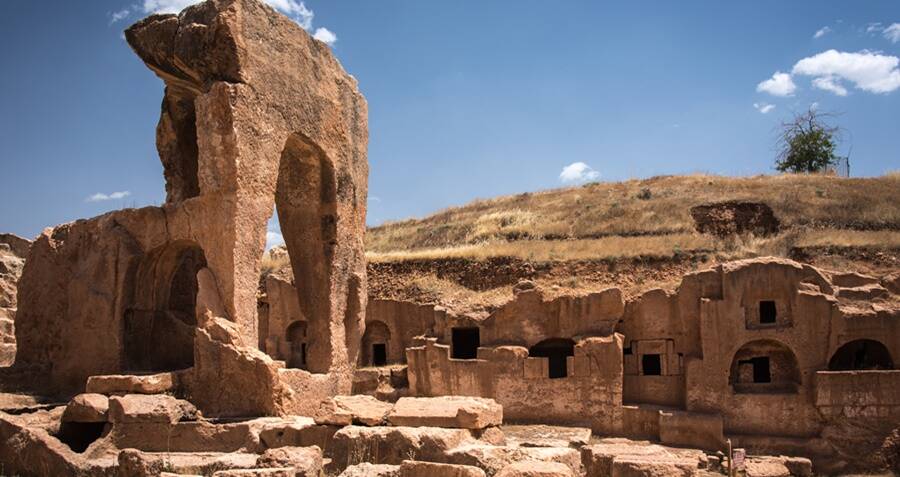 In late 2008, European members of the Ilisu Dam consortium froze the project’s financing for six months because it fell short of the World Bank’s standards for environmental and cultural protection.

Since then, funding for the project has lagged but the Turkish government has made it clear that it plans to carry out the controversial project to completion anyway, even if it means having to fund it themselves.

The Turkish government has posited that the Ilusi dam will be a major boon for the region. The Hydra Electric Power Plant that it will power should generate 4,200 gigawatts of electricity annually, improve irrigation for surrounding agriculture, spark new business and employment opportunities, and push more economic growth for the local communities.

But opponents of the dam argue that most of that electricity would merely generate power for the industrial centers located in the country’s western parts while the people most affected in the communities surrounding Hasankeyf wouldn’t benefit much from it after all.

Archaeologists are also skeptical of the government’s plan to preserve Hasankeyf’s archaeological wealth. To this end, Turkey has begun moving some of the 300 historical monuments in the area to a new location a mile north of the city, which the government plans to transform into an open-air cultural park.

“It is totally impractical and technically impossible,” said Ercan Ayboga, a hydrologist at Bauhaus University in Germany and spokesperson for the Initiative to Keep Hasankeyf Alive, which has campaigned for the ancient city’s preservation. 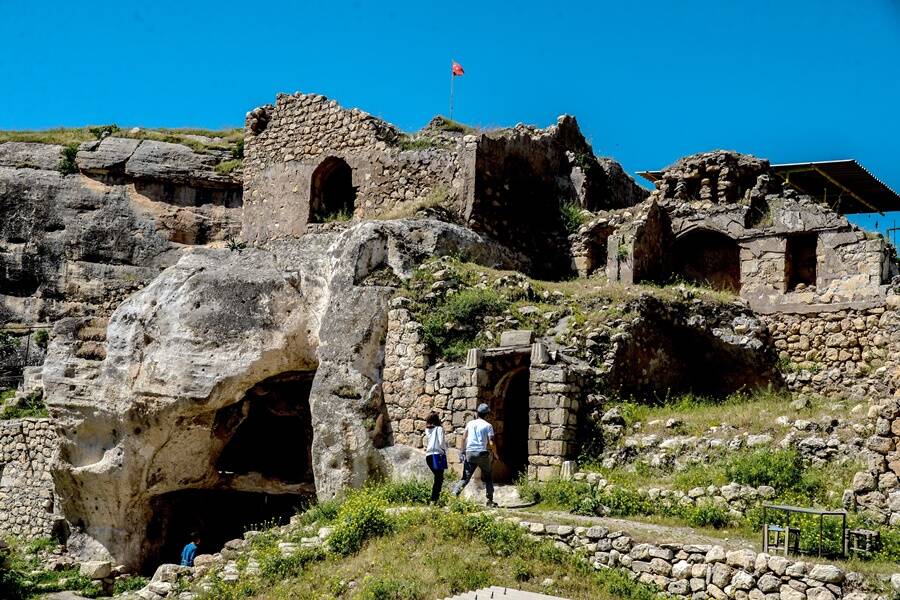 Ilya Akengin/AFP/Getty ImagesHasankeyf’s stunning historical monuments still draw tourists though not enough to sustain a robust economy for the area.

Ayboga explained that many of the monuments at Hasankeyf are made from ashlar masonry which are uniform stone blocks that have been sculpted to fit together. If they were taken apart, they could not be easily reassembled and the cultural monuments would likely lose their original details.

“The dam will bring only destruction for us,” Ayboga added.

Moreover, construction of the dam and the resulting reservoir along the Tigris poses geopolitical concerns for its neighboring countries downstream. Indeed, just last year Turkish efforts to begin filling the Ilusi dam with water were forced to cease after Iraq had complained that the dam was affecting the country’s already dire water shortage.

In a desperate attempt to stop the project altogether, activists have collected thousands of signatures to pressure the government to seek UNESCO protected status for Hasankeyf, and have also made an appeal at the European Court of Human Rights. Alas, these efforts have proven futile so far.

As of now, local authorities have said all roads leading to the old settlement will be blocked beginning on October 8, and ban any entry.

The Turkish government is continuing work on the Ilusi dam which is expected to raise water levels in the city by 200 feet, leaving the future of Hasankeyf under threat.

Next, take a look at 15 astounding photos taken inside the lost underground city of Derinkuyu. Then, read the story of how archaeologists found evidence of a lost city in rural Kansas.