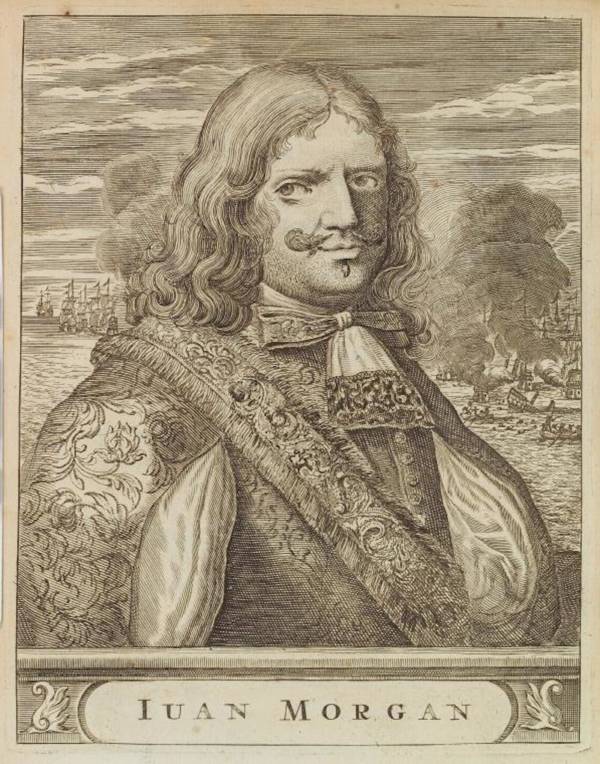 When we think of pirates, we imagine people like Henry Morgan. In fact, the man is so closely linked with piracy that a popular brand of rum is even named after him. And if you were looking for an example of a successful career as a pirate, you couldn’t do much better than Captain Morgan. After all, most pirates ended their swashbuckling days with a few amputated limbs and a short trip to the gallows.

But Morgan was different. He was such a successful pirate that he ended his career as a lieutenant governor.

Morgan was born in Wales sometime around 1635. We know very little about his early life, but we know that he found his way to the Caribbean in the early 1650s. There’s no definite answer for how he got there, but he may have been a soldier in an English expedition against the Spanish forces in the area.

No matter how he got there, Morgan arrived in the Caribbean at the perfect time to begin a career as a pirate. Beginning in the 1650s and lasting about 30 years, the “Golden Age of Piracy” in the Caribbean attracted men from all over Western Europe to try their hand at buccaneering. And Morgan was no exception.

By the 1660s, Morgan had found a place in a fleet of privateers led by Captain Christopher Myng. Together, Myng and Morgan cut a swath of bloody terror across the Spanish Caribbean. In 1663, they sacked Santiago de Cuba, carting away the city’s valuables.

Flush with booty, they then amassed a fleet of 14 ships and 1,400 men and sacked the heavily fortified city of Campeche in the Yucatan Peninsula. 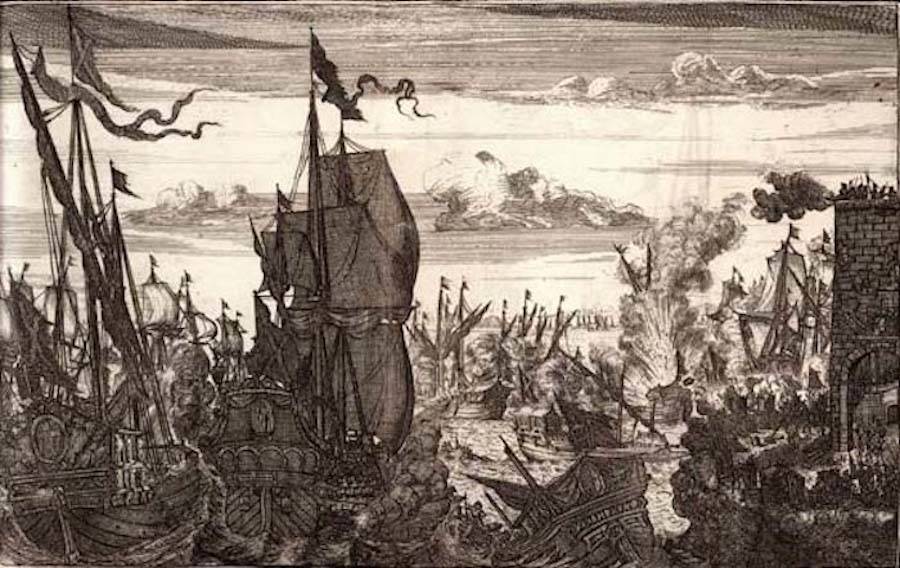 By 1665, these raids had made Henry Morgan enough cash to purchase a plantation in Jamaica. Now owning a ship as well, Morgan then decided to strike out on his own. In 1667, Governor of Jamaica Sir Thomas Modyford issued Morgan a letter of marque, authorizing him to attack Spanish shipping. The next year, Morgan was promoted to admiral and given a fleet of ten ships.

Morgan’s letter of marque gave him permission to attack Spanish ships, but not Spanish cities. Any attacks on land would be an act of piracy. But like any buccaneer worth his salt, Morgan knew that was where the money was. And like most privateers in the Caribbean, he didn’t spend much time worrying about the distinction between what was and wasn’t technically piracy.

Henry Morgan attacked a number of Spanish cities in the Caribbean then reported to the governor that they had been organizing attacks on Jamaica. This probably wasn’t true, but it did provide a nice legal cover for the attacks.

However, the loot from these raids wasn’t as impressive as Morgan hoped. So, the captain began making plans to raid Porto Bello, one of the richest cities in the Spanish Caribbean. 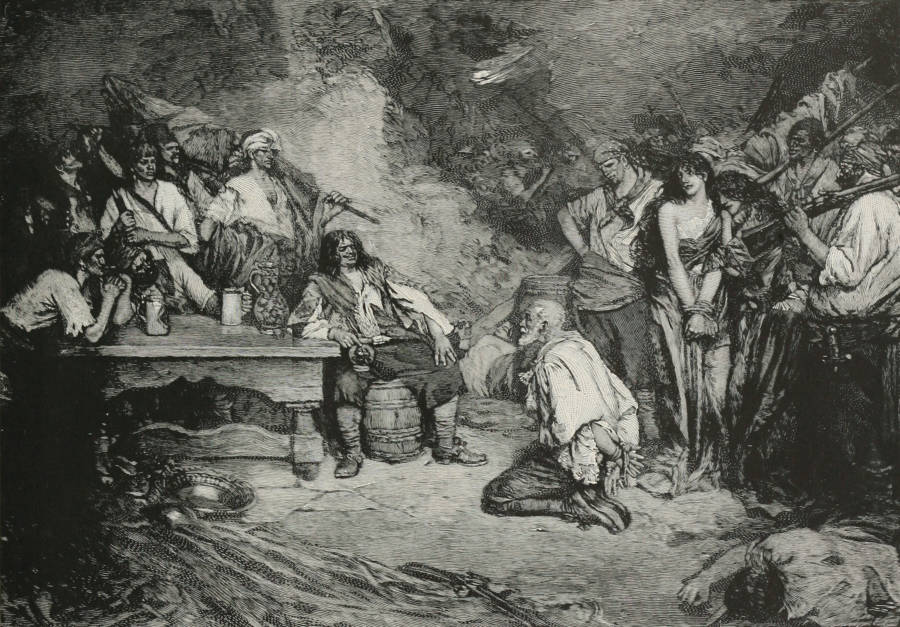 Because the city was wealthy, it was heavily defended. Two castles overlooked the harbor with another in the center of town, all bristling with cannons. Even with a fleet, the odds of taking the city were slim. But rather than order a full-on attack, Morgan anchored outside the city in the early hours of the morning.

Then, his men snuck ashore in canoes and captured the castles before anyone inside the city even knew what was happening.

With the loss of just 18 men, Morgan had captured one of the greatest fortresses in the Caribbean. After repelling a Spanish counterattack of 800 men. Morgan proposed a deal: he would ransom the city back to the Spanish for 100,000 pesos. Out of options, the Spanish agreed.

Morgan sailed back to Jamaica with more money than Jamaica made in a year from all of its plantations combined. And despite the fact that the raid was completely illegal, he was hailed as a national hero in Britain. Meanwhile, Sir Thomas Modyford officially denounced Morgan’s actions. But the 10% cut of the profit that Morgan offered him had a pacifying effect.

Morgan spent the next two years attacking Spanish colonies and fleets near Venezuela. And in 1670, he began organizing an attack on Panama City. By then, the Spanish had received word of Morgan’s plan. They began organizing a defense of the city, with the governor declaring that he would burn the city to the ground before he saw it fall into Morgan’s hands. 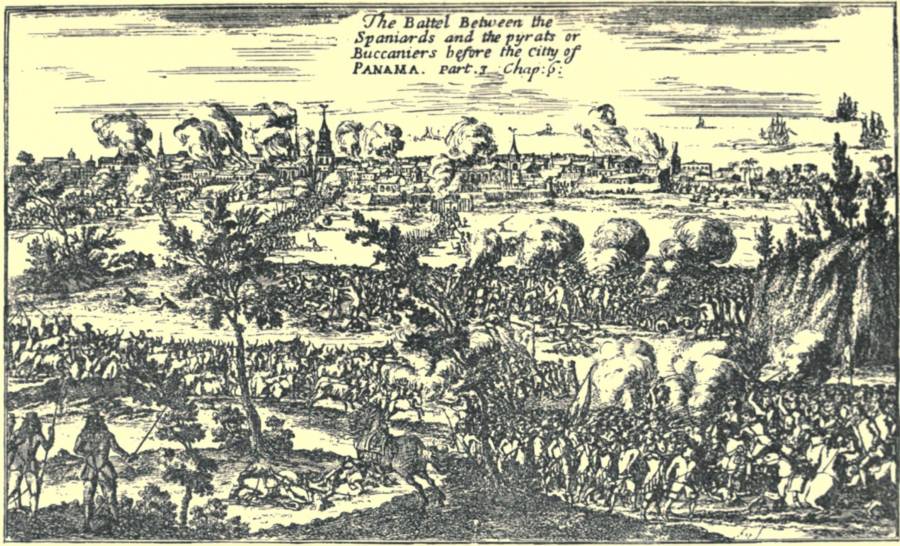 After a trek through the jungle and fighting off a number of Spanish ambushes, the pirates met a Spanish army of 1,600 men outside the walls of Panama City. Morgan routed the Spanish, killing 400 of them and losing only 15 men in the process. There was now nothing stopping him from looting one of the richest cities in the Spanish colonies.

But true to his word, the governor ordered the city’s powder stores to be set alight. Massive explosions rippled across the city, setting it ablaze. The fire burned for two days and destroyed most of the city’s wealth.

Morgan managed to pull around 300,000 pesos worth of booty from the ruins, but with a large army demanding payment, the money didn’t go far. Meanwhile, events in Europe were bringing an end to the age of piracy and putting Morgan’s reputation as a hero to the test.

Though Morgan didn’t know it, the Spanish and the English had signed a peace treaty a few weeks before the attack on Panama. And Morgan’s raid on the city risked restarting the war. To reassure the Spanish, King Charles II ordered Morgan and Sir Modyford arrested and brought to London. 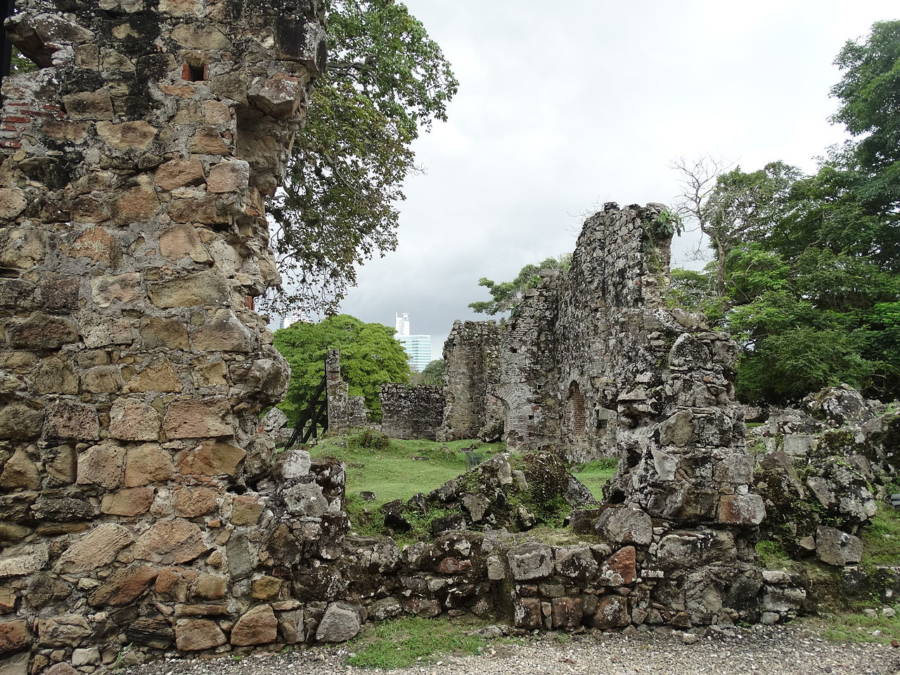 Luckily for Henry Morgan, his exploits against the Spanish had made him a legend among the common people of Britain. Rather than risk their wrath, King Charles II released Morgan, knighted him, and even sent him back to Jamaica as deputy to the new governor.

But life as a politician didn’t suit Morgan and he began drinking heavily. Allegations – mostly true – that he was investing in pirating expeditions led to him being sacked from his position. Still an assemblyman in the colony and one of Jamaica’s richest men, Morgan spent the rest of his days drinking and gambling.

He finally died of complications from alcoholism, which makes him an interesting choice as the official mascot for an alcoholic beverage company.

Captain Henry Morgan was given a state funeral and an amnesty declared so that pirates from around the Caribbean could pay their respects to the legendary pirate.

Next, learn about the Chinese prostitute who became one of the most successful pirates in history. Then, see who the real Most Interesting Man in the World is.