Appreciate Your Bikini: A Brief History Of Women’s Swimwear

Be it bathing machines, the swimsuit police or the full-on dresses that Victorians wore to the beach, the history of women's swimwear will blow your mind. 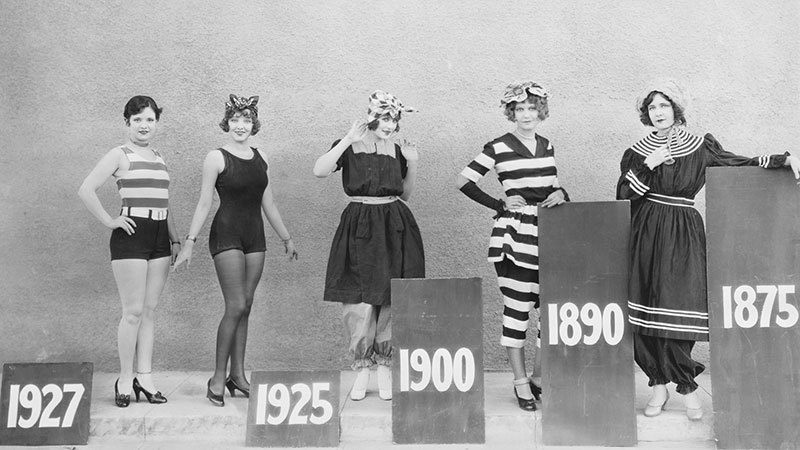 As the summer heat hits full blast, people everywhere are flocking to the water. While the tendency to hit the waves when the going gets hot is not unique to a given time or people, what we wear (or don’t!) certainly is. From full-on dresses to itsy-bitsy bikinis–plus weird contraptions called bathing machines–you’ll love this history of women’s swimwear.

The history of women’s swimwear begins with a simple outfit known as the birthday suit. All jokes aside, up until the 19th-century people frequently bathed nude. And while women were known to cover themselves with clothing that resembles our modern-day bikini, the outfits weren’t for swimming.

In fact, swimsuits were invented in the mid-1800s. Their creation came out of necessity; recent improvements in railroad systems and other transportation methods had finally made swimming and going to the beach a recreational activity. 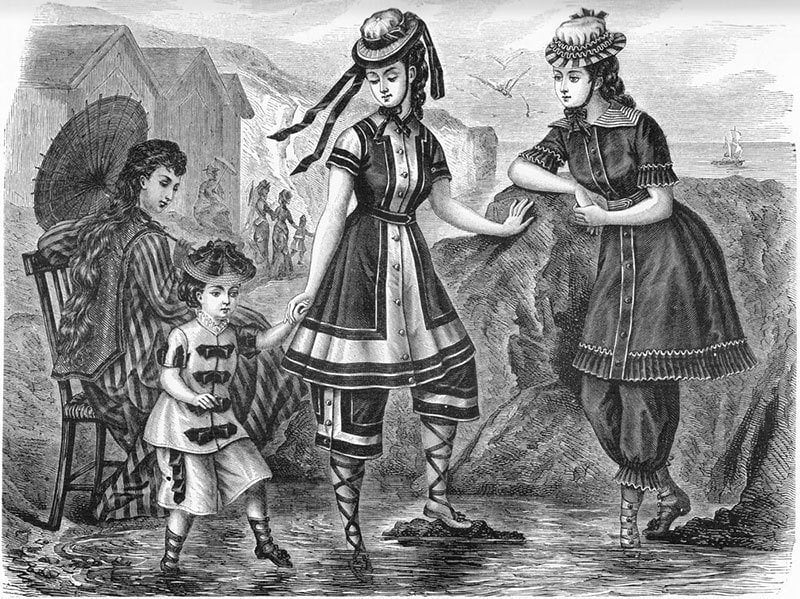 If you saw a picture of swimsuit-clad women in the second half of the 19th century, you’d have a hard time recognizing their outfits as swimwear. The times called for swimsuits that more closely resembled a belted dress over long bloomers (aka baggy pants). While they weren’t aesthetically appealing, the swimwear fulfilled its primary purpose: to conceal a woman’s body. 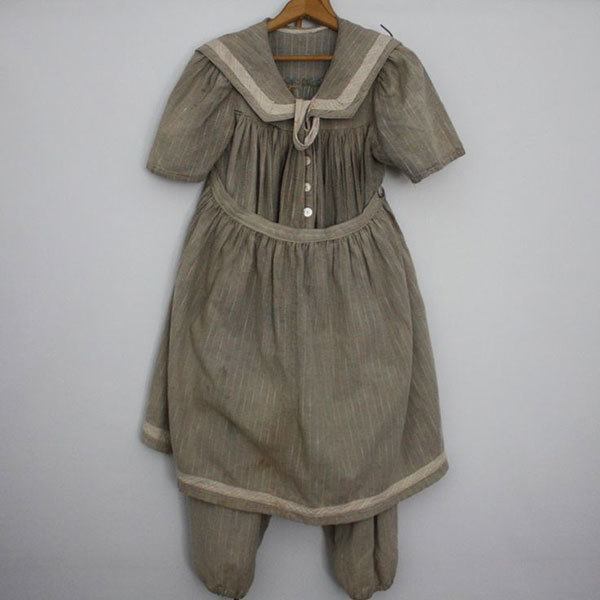 An example of swimwear from the late 1800s. Source: Pinterest

Back in those days, women were compelled to conceal their bodies so as to be “modest.” For that reason, the top portion of the swimsuit hung low like a dress to hide the woman’s figure. These suits were made from heavy flannel fabric that was both opaque and sturdy enough to not rise with the water. At some sites, 19th-century women also had the luxury of using a bathing machine. These small, wheeled structures were dragged into shallow waters so a Victorian lady could prance around the ocean in complete privacy. 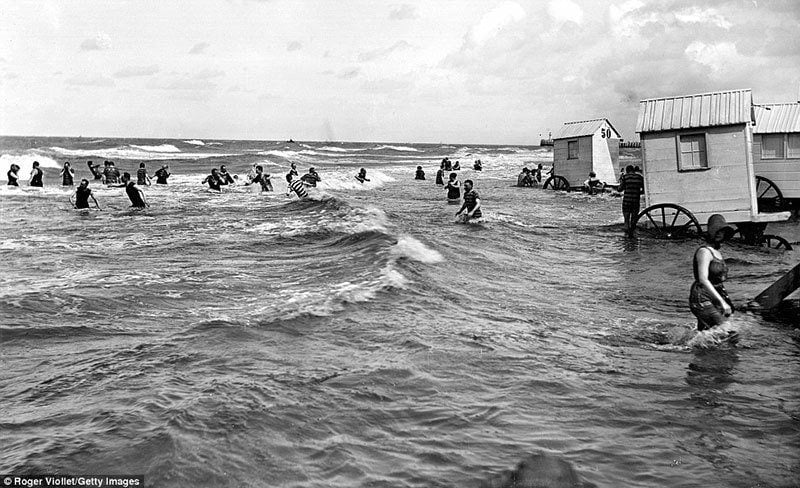 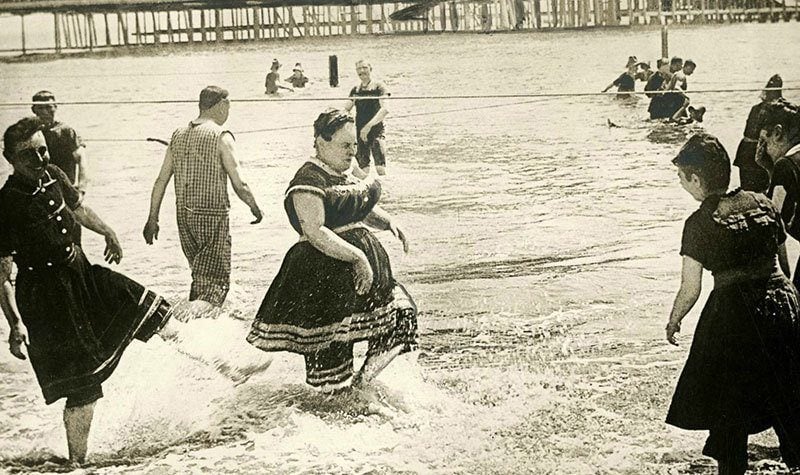 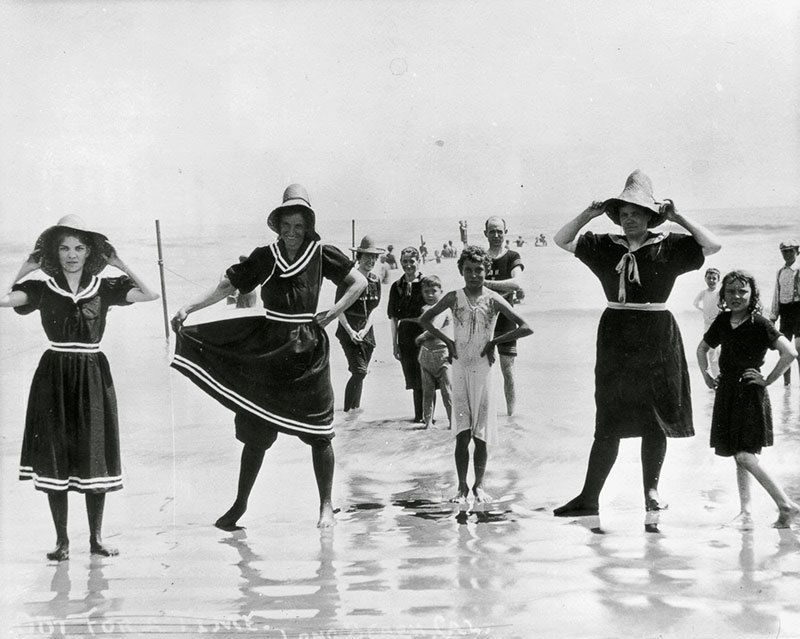 Only at the turn of the century, when swimming became an intercollegiate and Olympic sport, did people realize that the current swimwear lineup had been designed without functionality in mind. As the sport grew, swimsuits became more streamlined and less heavy, paving the way for styles to come. At this point in the history of women’s swimwear, women often accessorized with soft bathing slippers that provided added protection against rough shores. 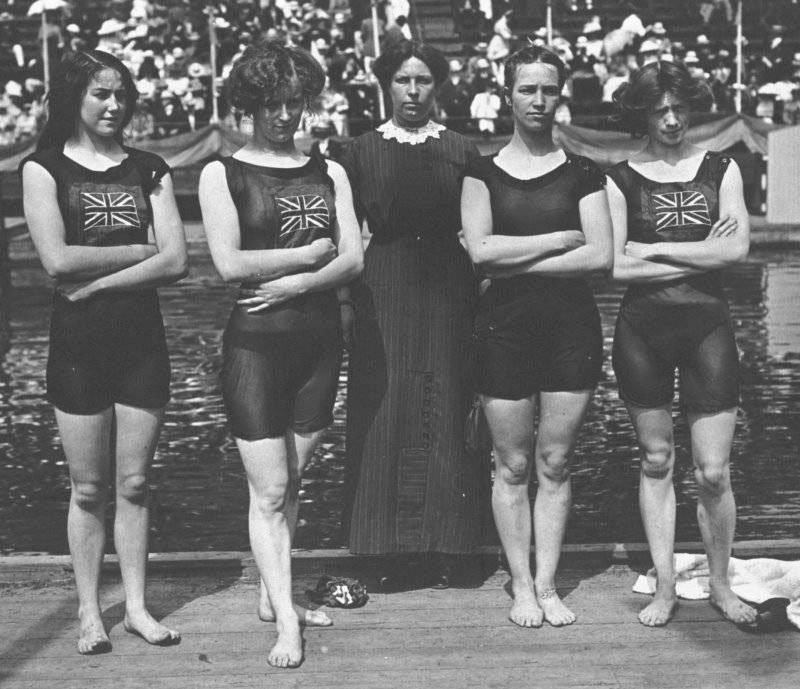 The British Women’s Swim Team at the 1912 Olympics. 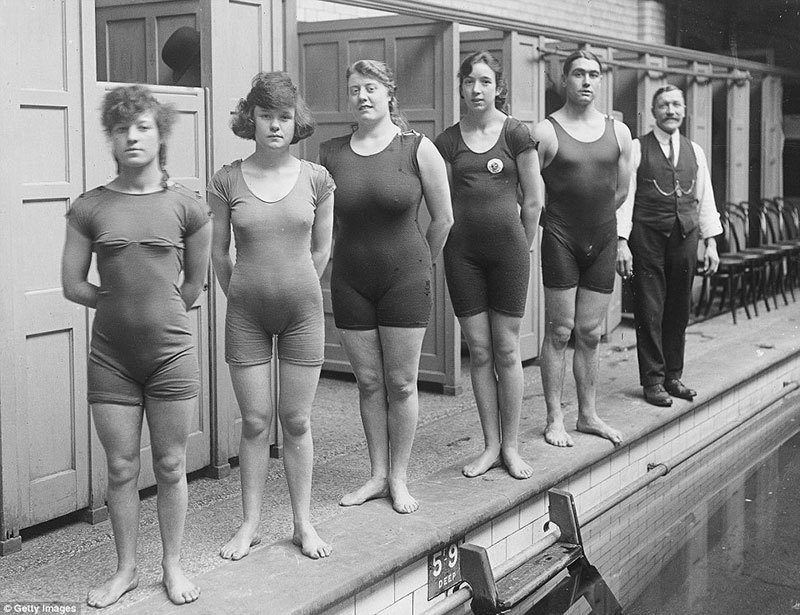 By 1910, women’s swimwear was less restrictive and heavy. Women exposed their arms, hemlines crept up to the mid-thigh and designers used less fabric to conceal a girl’s figure. As the 1920s rolled around, the swimsuits got smaller, and the demand for them grew larger. Hollywood and Vogue both popularized the idea of swimwear being sexy and glam, a trend that would persist in the decades to come. 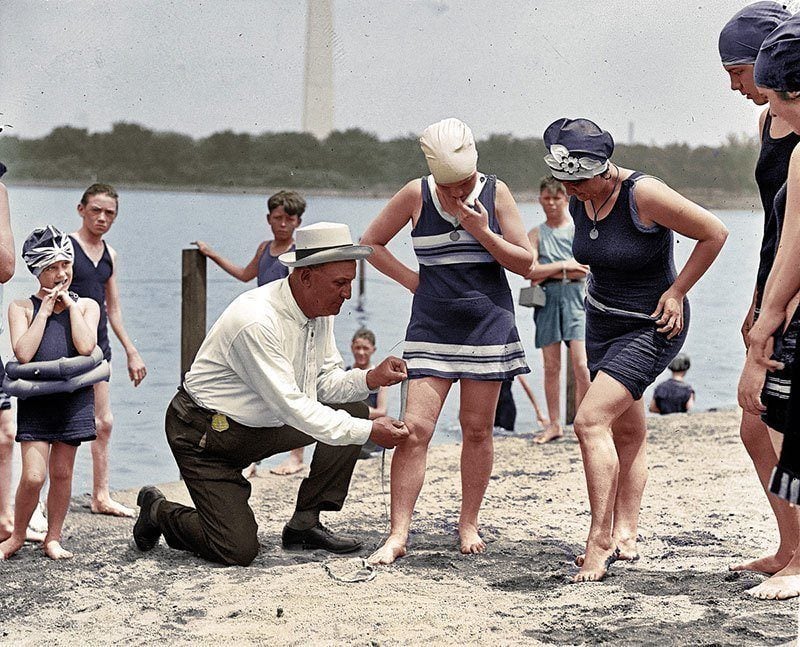 When this picture was taken in 1922, women were subjected to “swimsuit police” who literally measured the length of their swimwear. Source: Huffington Post 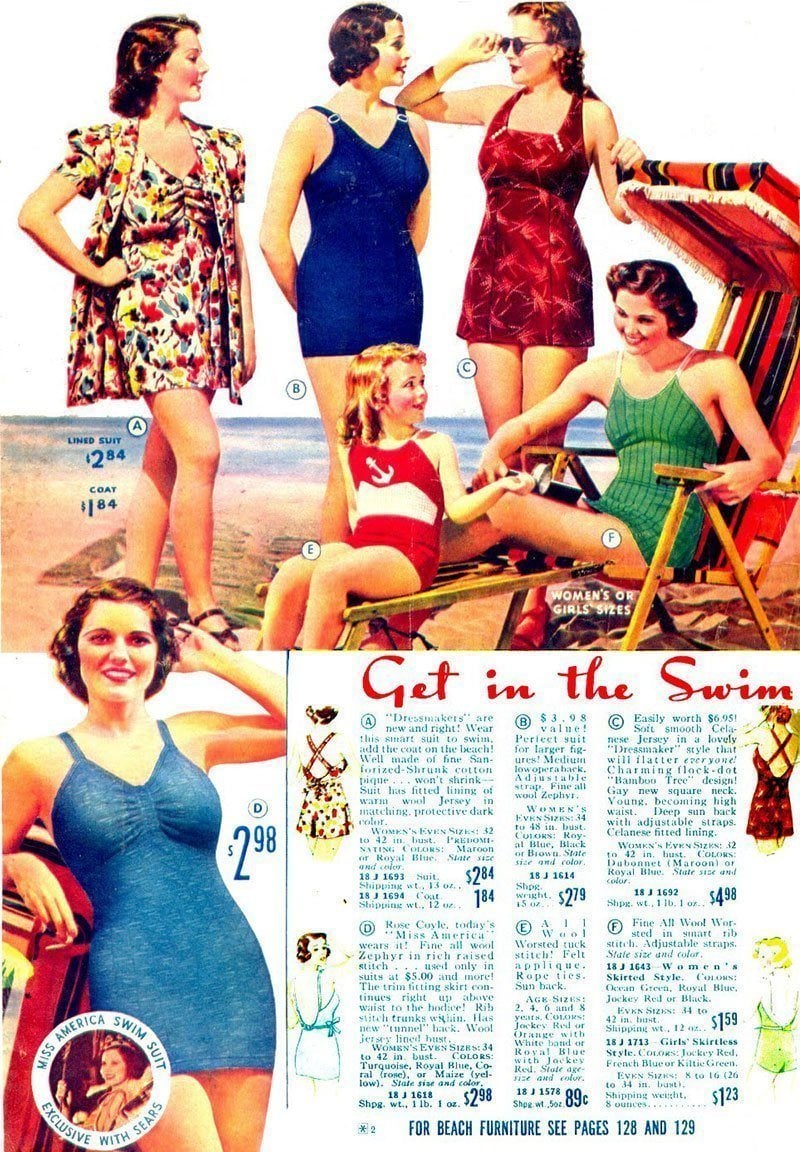 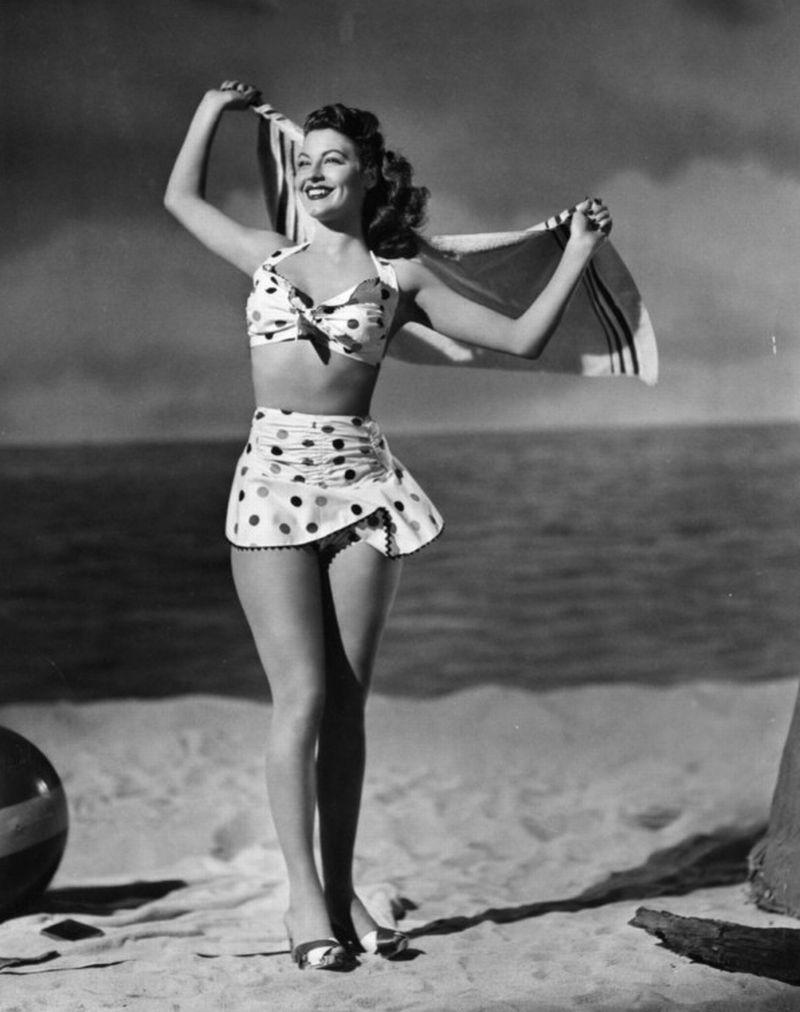 While two-piece suits were common in the years leading up to World War II, they usually covered a woman’s navel and left only a bit of midriff visible. In 1946, French designer Louis Reard introduced the world to the first modern bikini, featuring significantly less fabric than its predecessors.

Its name has roots in the war: Reard was inspired to name his two-piece after a newsworthy US atomic test with the name Bikini Atoll. The new design was so risqué that the designer had to hire Micheline Bernardini, a Parisian showgirl, to model it. 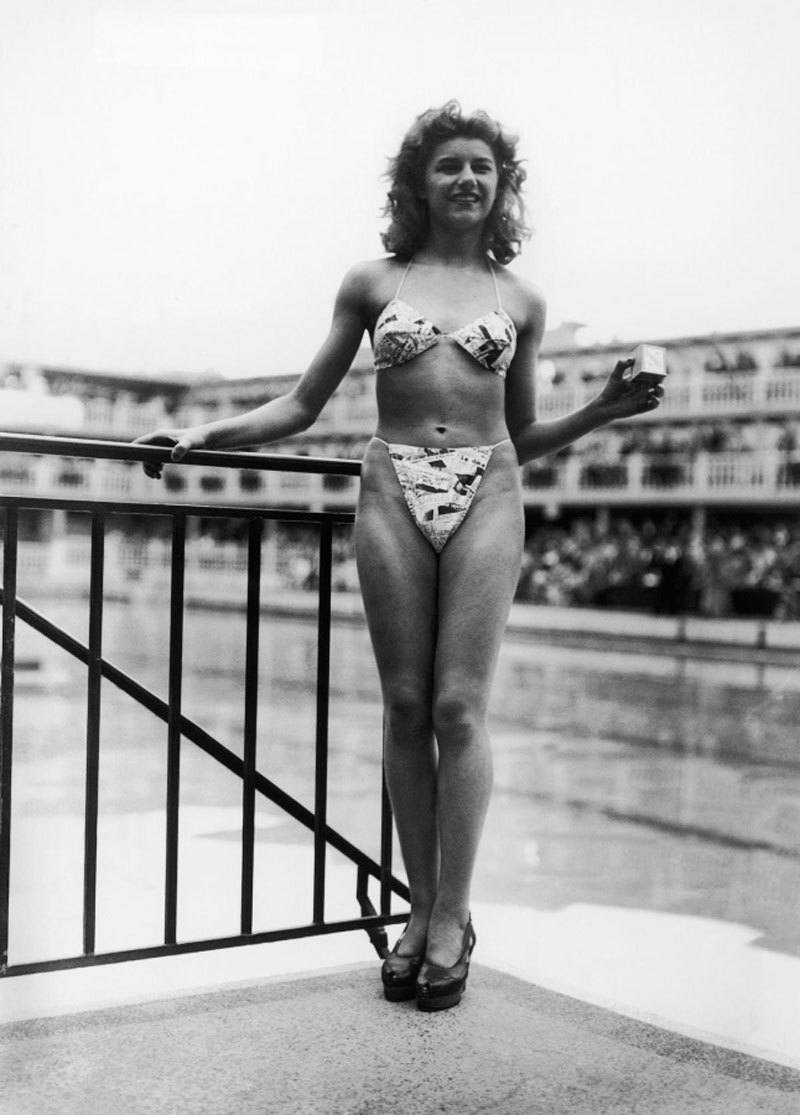 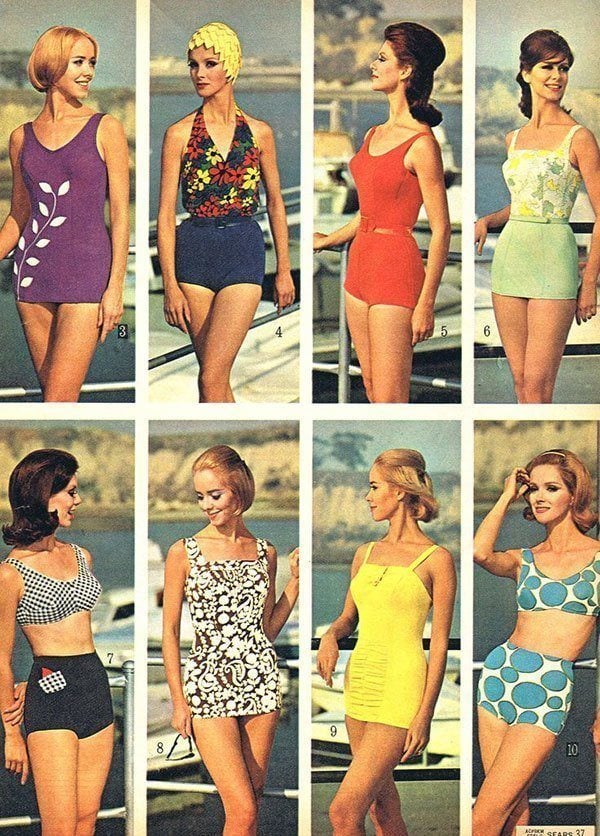 While changes to future generations of swimwear were mostly aesthetic in nature, a few iconic swim styles stood out and captivated the country. Take, for instance the red one-piece that stars like Pamela Anderson and Carmen Electra donned for Baywatch.

As women’s swimwear has expanded to include a variety of styles, so too has it introduced new, accompanying industries. One of which is swimsuit photography, which got its start in the middle of the 20th century and has since catapulted into popularity. And while we may not always appreciate the “openness” that modern swimwear has introduced, at least the bathing machine is history. 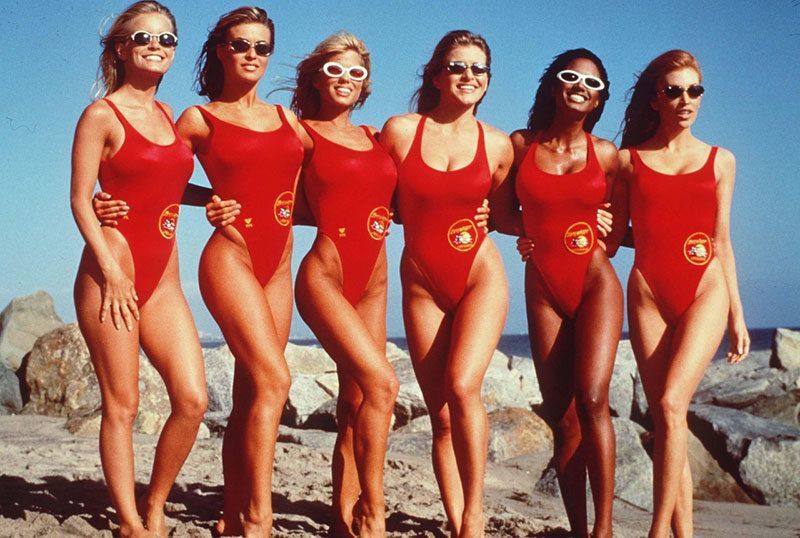 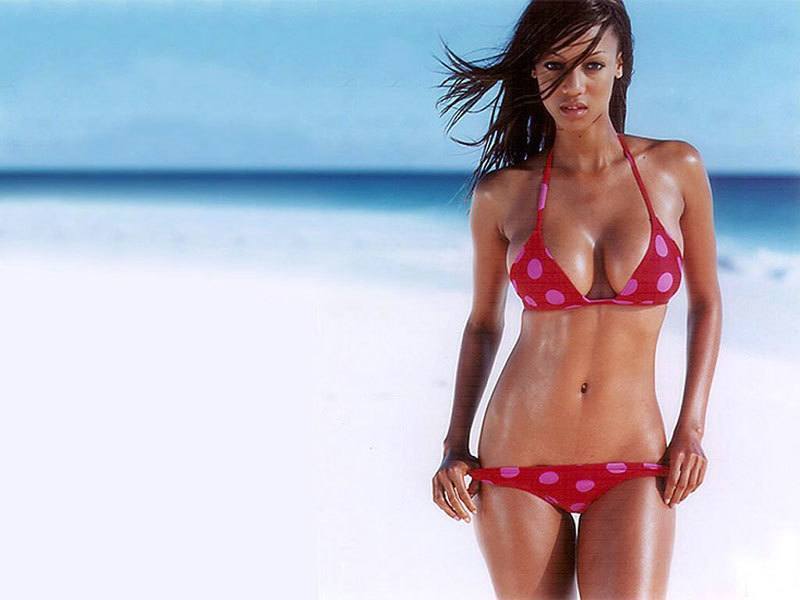 Tyra Banks was one of the most iconic swimsuit models around the turn of the 21st century.