In May 1845, the HMS Terror set off in search for the elusive Northwest Passage. It wasn't seen again for 175 years. 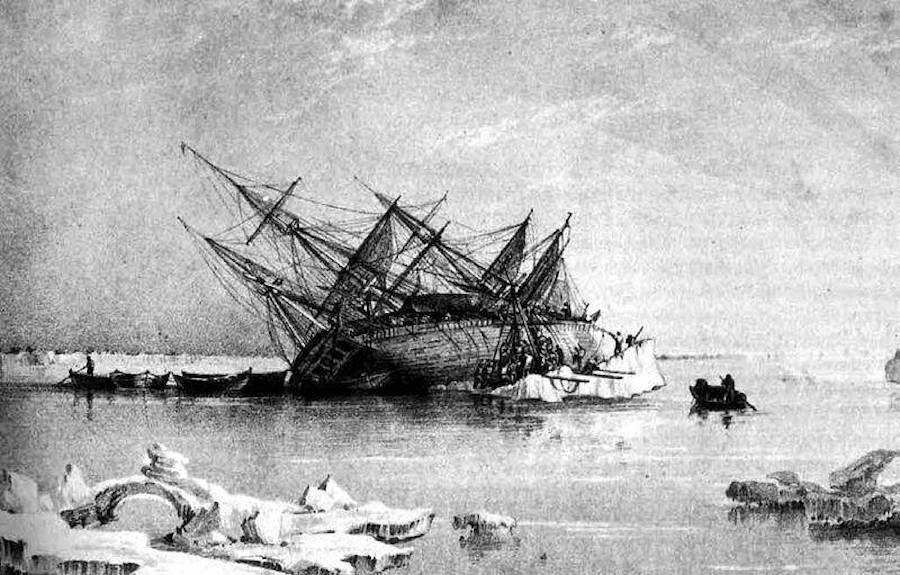 In 1845, seasoned naval commander Sir John Franklin set out to find the Northwest Passage aboard two ships, the HMS Terror and HMS Erebus. The Terror, in particular, was quite an impressive ship. She was initially built as a bomb vessel and participated in multiple skirmishes in the War of 1812.

When it came time to guide Sir Franklin on his venture north, both ships were substantially reinforced with iron plating capable of crushing through the Arctic ice. But despite their hardiness, both the Terror and Erebus disappeared with the crew of the Franklin expedition shortly after setting sail.

It would be another 170 years before anyone saw Erebus and Terror again, but this time, they were at the bottom of an Arctic bay. Historians have since attempted to piece together their final days — and they include a grueling mixture of lead poisoning, starvation, and cannibalization, before mysteriously becoming shipwrecked.

The Terror Embarks On The Franklin Expedition 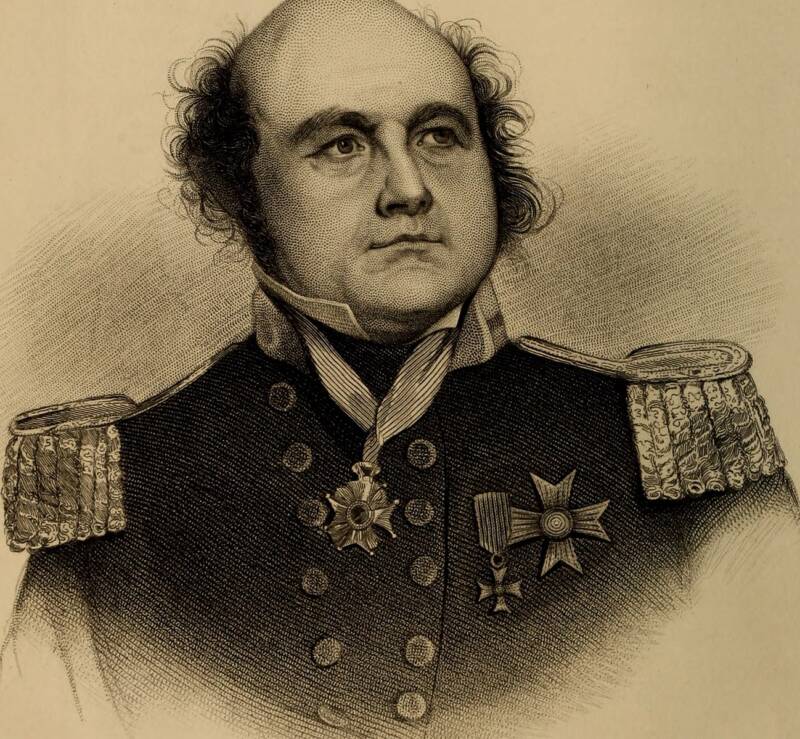 Wikimedia CommonsBefore embarking on the expedition that bore his name, Sir John Franklin was knighted and selected to be the lieutenant governor of Tasmania.

In May 1845, accomplished Arctic explorer Sir John Franklin was selected by the English Royal Navy to locate the lucrative Northwest Passage. All the world’s major powers had long searched for the trade route, which was a shortcut to Asia through the Arctic.

This would not be Terror‘s first Arctic expedition. She ventured to the Arctic first in 1836 and then to the Antarctic in 1843. Even before this, Terror had garnered an impressive resume. Launched in 1813, Terror famously saw action in the War of 1812 and even participated in the battle that inspired Francis Scott Key to write the poem that eventually became “The Star-Spangled Banner.”

By all accounts, Terror was prepared to brave Franklin’s expedition and both she and her sister ship, Erebus, were consequently equipped with robust, iron-layered hulls and steam engines. These were among the most scientific equipment available at the time.

Both ships were also stocked with three years’ worth of food. Together they carried 134 men, though five were discharged within the first three months of the venture. The Terror and Erebus together carried 32,000 pounds of preserved meat, 1,000 pounds of raisins, and 580 gallons of pickles.

The ships made two stops in Scotland’s Orkney Islands and then in Greenland before they set course for Arctic Canada.

The very last time anyone saw either the HMS Terror or its sister ship was in July 1845 when two whaling vessels spotted them cross from Greenland to Canada’s Baffin Island.

The next time the Terror was seen was at the bottom of an Arctic bay.

The Final Days Aboard Erebus And Terror 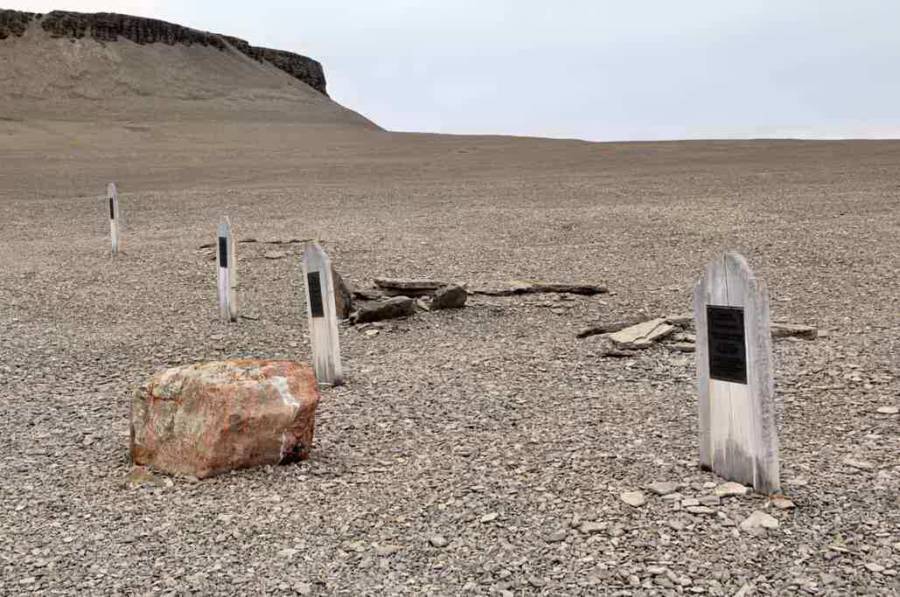 What happened after the HMS Terror set its course for Baffin Island remains largely a mystery, but most researchers would agree that both ships became trapped in the ice off King William Island on Sept. 12, 1846, and a desperate crew disembarked to find help.

According to an 1848 letter found under a cairn in Canada’s Victoria Point in 1859, the ships had already been locked in ice for more than a year and a half. The letter was written by a man named Francis Crozier who had taken command of the Terror after Franklin perished.

He stated that 24 men were already dead, including Franklin, and that all the survivors planned to walk to a remote fur-trading outpost hundreds of miles away. None of them completed the treacherous journey. 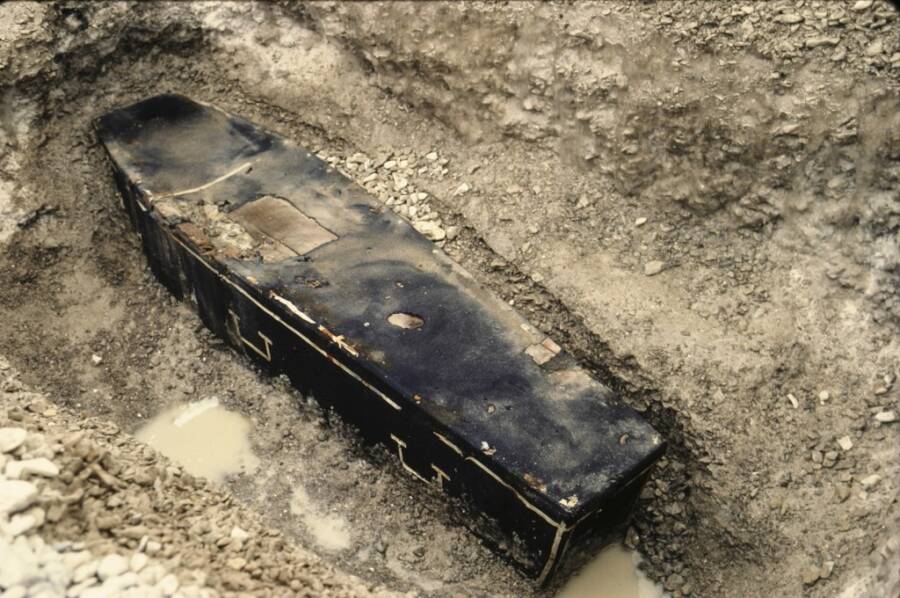 Brian SpenceleyThis is the coffin of John Hartnell, one of three sailors found buried on Beechey Island. His shipmates made fake handles for his coffin out of tape.

Meanwhile, the British Royal Navy had dispatched dozens of search parties soon after the ships disappeared, but it would be another 170 years before anyone found the Terror and its sister ship.

But in 1850, American and British search parties were stunned to find three unmarked graves on an uninhabited bit of land named Beechey Island. They were dated 1846.

An even bigger discovery was made four years later when Scottish explorer John Rae met a group of Inuits in Pelly Bay who had some of the belongings of the Franklin crew. 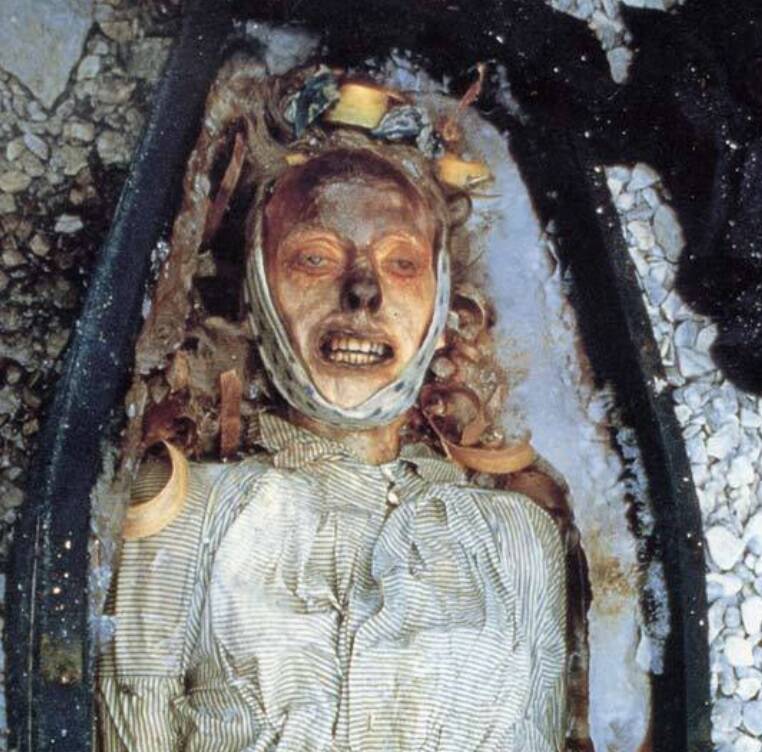 The Inuits explained that there were piles of human bones scattered around the area. Many of these skeletal remains were cracked in half which suggested that Franklin’s men likely resorted to cannibalism before they froze to death.

Then, in the 1980s and 1990s, researchers discovered knife marks on additional skeletal remains that were found on King William Island. This all but confirmed that after disembarking the Terror, a starving crew murdered and dismembered their peers before eating them and extracting their bone marrow.

In 1984, anthropologist Owen Beattie exhumed one of the bodies buried on Beechey Island and found a pristinely preserved member of the expedition named John Torrington. According to letters from the crew, the 20-year-old died on Jan. 1, 1846, and was buried in five feet of permafrost. 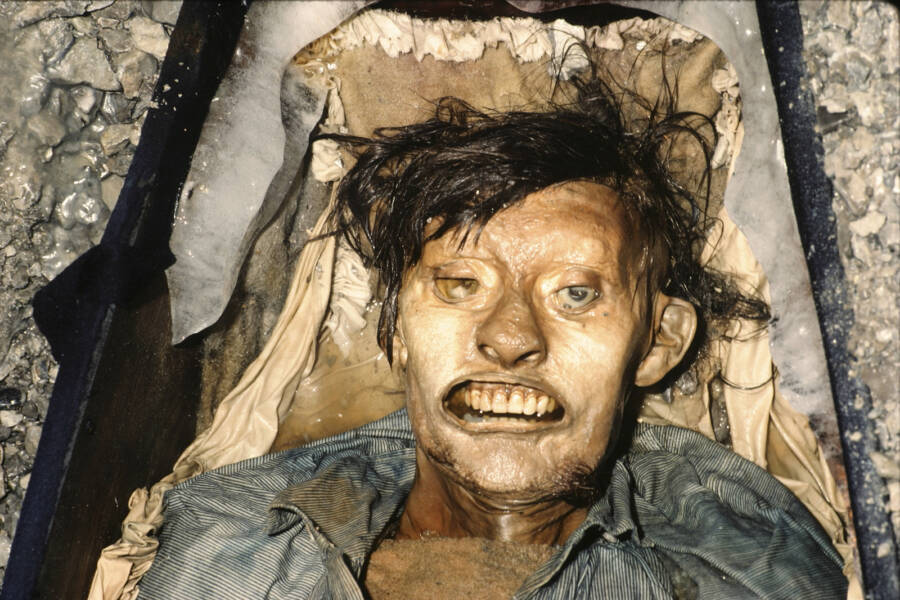 Brian SpenceleyPictured is the frozen mummy of John Hartnell who was exhumed from Beechey Island in 1986. He was the photographer, Brian Spencely’s, maternal great-great uncle.

Torrington was lucky, nothing in his autopsy report suggested that he was one of the crew members to fall victim to cannibalism. His milky-blue eyes were still open when he was found. Experts also found that his body was kept warm after he died, likely by a crew still capable enough to conduct a proper burial.

Torrington’s 88-pound body suggested that he was malnourished before he died and he contained deadly levels of lead. Because of this, researchers began to believe that the crew’s food supply had been poorly canned and likely poisoned all 129 of Franklin’s remaining men with lead on some level.

The three corpses found on Beechey Island remain buried there to this day. 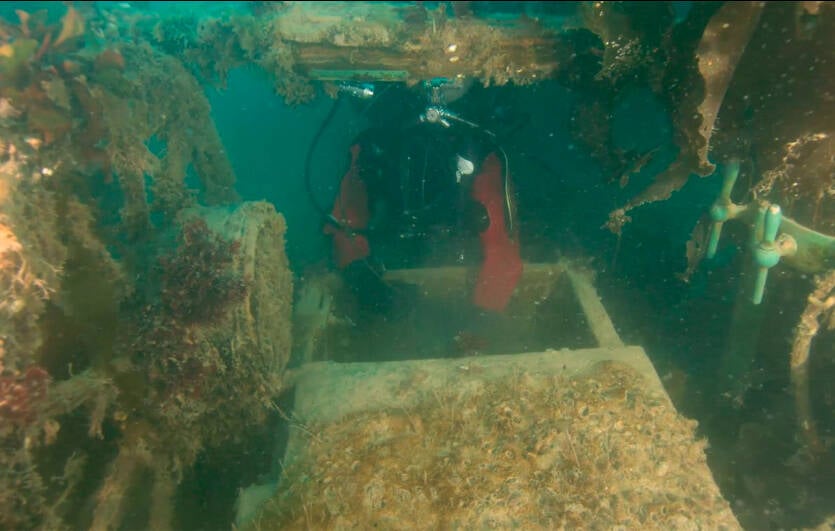 In 2019, Parks Canada archaeologists sent underwater drones to explore the ship — and made a startling discovery.

“The ship is amazingly intact,” said lead archaeologist Ryan Harris. “You look at it and find it hard to believe this is a 170-year-old shipwreck. You just don’t see this kind of thing very often.

Why the ships separated and then sank remains a mystery today. “There’s no obvious reason for Terror to have sunk,” said Harris. “It wasn’t crushed by ice, and there’s no breach in the hull. Yet it appears to have sunk swiftly and suddenly and settled gently to the bottom. What happened?”

With the help of local Inuits, the Parks Canada team was able to conduct seven dives in 2019 to create a 3D map of the Terror. The crew sent remote-operated drones into the ship through the main hatchway, the crew cabin skylights, the officers’ mess hall, and the captain’s stateroom.

“We were able to explore 20 cabins and compartments, going from room to room,” said Harris. “The doors were all eerily wide open.”

Parks Canada, Underwater Archaeology TeamFound in the officers’ mess hall, these glass bottles have remained in pristine condition for 174 years.

The bowels of the HMS Terror appear frozen in time after nearly two centuries in the dark depths of the Arctic archipelago. Plates and glasses are still shelved. Beds and desks are in position. Scientific instruments remain in their proper cases.

The team also found “blankets of sediment” on the ship and all its contents. According to Harris, that sediment along with cold water and darkness created “a near-perfect anaerobic environment that’s ideal for preserving delicate organics such as textiles or paper.”

Indeed, the drones filmed countless journals, charts, and photographs that could all potentially be salvaged. 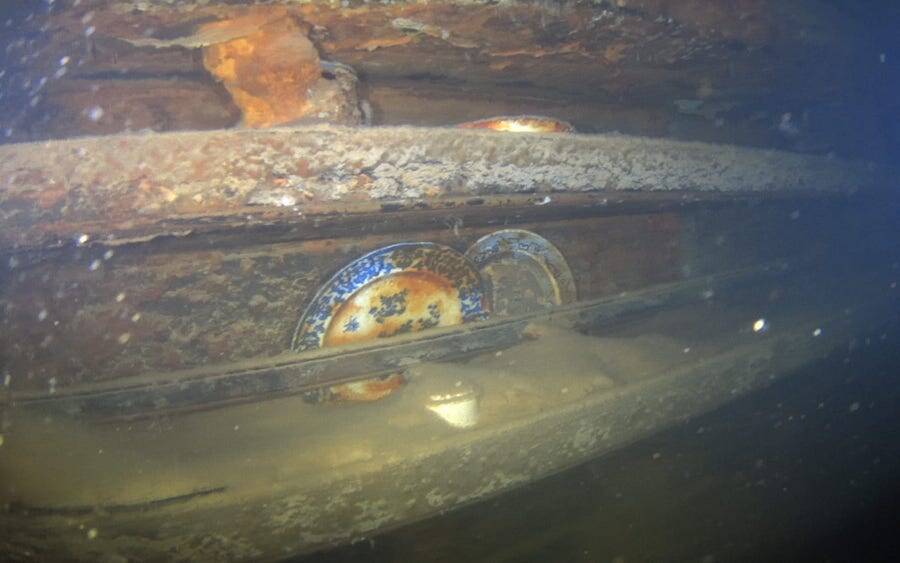 Parks CanadaCutlery, journals, and scientific instruments found inside the HMS Terror all seem to be perfectly intact after nearly two centuries underwater.

“There is a very high probability of finding clothing or documents, some of them possibly even still legible. Rolled or folded charts in the captain’s map cupboard, for example, could well have survived.”

As if peering into the mysterious wreck of the Terror wasn’t eerie enough, the team noticed that the only closed door on the whole ship was the captain’s room.

“I’d love to know what’s in there,” mused Harris. “One way or another, I feel confident we’ll get to the bottom of the story.”

After this look at the HMS Terror in its watery grave, check out five more intriguing shipwrecks. Then, take a look at 11 sunken ships found around the world.