Biblical Shrine In Israel Found To Have Hosted Rituals Involving Cannabis In The 8th Century B.C.

The cannabis was mixed with animal dung to make it burn more slowly at a lower temperature. 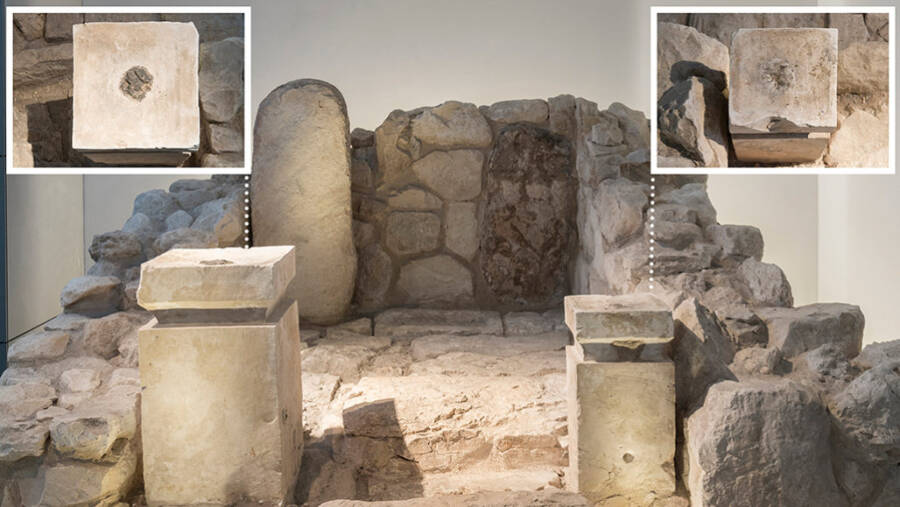 Israel MuseumThe shrine at Arad, as rebuilt in the Israel Museum in Jerusalem. The upper squares show the cannabis and frankincense residues.

The oldest known instance of ritualistic cannabis burning has been discovered on a limestone altar in Israel’s Tel Arad shrine. According to Science News, the cannabis was mixed with animal dung to burn at lower temperatures, while the frankincense found on another altar helped with the stench.

Excavations in the 1960s already revealed the ruins of two fortresses, ostracas (stones with inscriptions), and the shrine dedicated to Yahweh — but only modern analysis could help in identifying the residue atop each altar. These stood at the entrance of a cella, or small room containing cult objects.

Researchers believe this is where religious rites were held, and previous analysis of pottery items found at the site suggests the shrine saw regular use between 760 B.C. to 715 B.C. Published in the Journal of the Institute of Archaeology of Tel Aviv University, the study is nothing short of historic.

“This is the first time that cannabis has been identified in the Ancient Near East,” said lead author Eran Arie from the Israel Museum in Jerusalem. “Its use in the shrine must have played a central role in the cultic rituals performed there.” 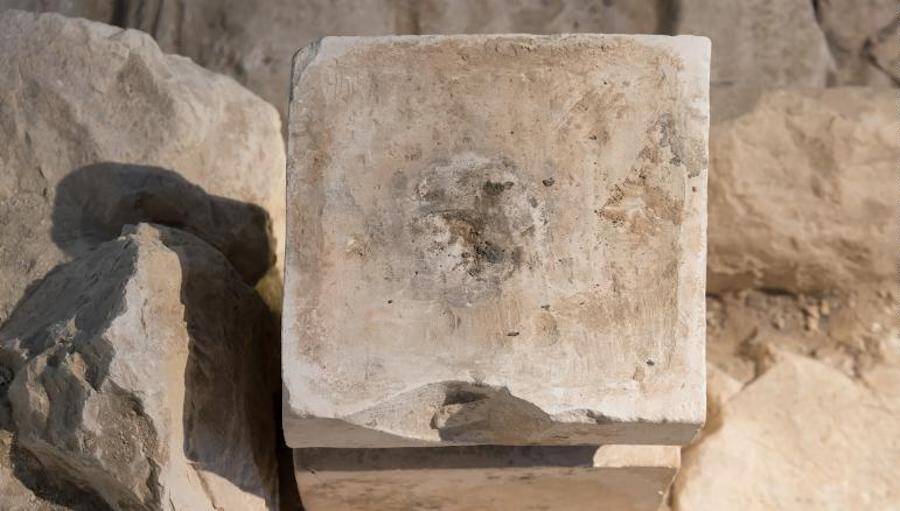 Israel MuseumThe cannabis was mixed with animal dung to burn at a lower temperature, thus slower, presumably to last for the duration of the religious rite.

According to CNN, it was late archaeologist Yohanan Aharoni who initiated excavations in 1962. For the next five years, his work on behalf of the Institute of Archaeology of the Hebrew University of Jerusalem uncovered items still being investigated over half a century later.

The two fortresses dated to the ninth and sixth centuries B.C. and served to guard the Judahite kingdom’s southern border. The shrine was constructed in the 10th century B.C., not unlike the First Temple of Jerusalem — and built upon the east-west axis in a potentially ritualistic act, itself.

Located in the northwestern corner of the fortresses, the shrine is 42 feet across and 62 feet deep. It holds four distinct areas, including an open courtyard cordoned off with fences and a storage area, a main hall, and a small cella west of the main hall.

Perhaps most significant is that the shrine dates to a period when Judah was largely an assortment of rural settlements. The cella, which contained all items required in the religious rites, was considered the heart of the shrine — and thus aptly termed the “Holy of Holies.” 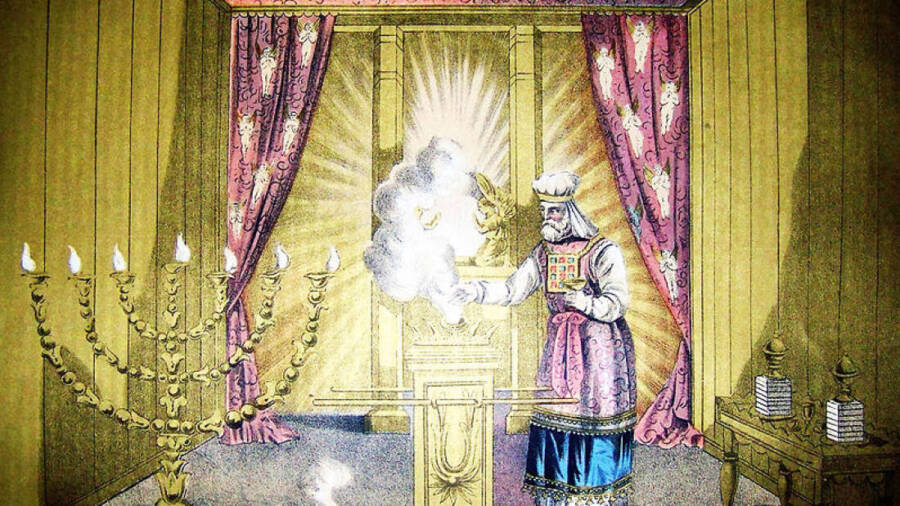 Public DomainThe “Holy of Holies” shrine as depicted in the 1890 Holman Bible.

It’s unclear why the shrine was buried. Its hiding could be ritualistic or perhaps to protect it from the occupying Assyrians of the time. One thing definitely seemed clear to Arie once the stairs, floor, and furniture of the shrine were moved from exhibits to galleries over the 2000s.

“This was the point I realized for the first time the real incense was really left there,” he said.

Chemical analysis of the dark residue discovered on the altars in the 1960s was either inconclusive or undisclosed until now. Arie realized around two years ago that modern techniques could shed invaluable light on the Biblical mystery. For him, the results were shocking.

“We know from all around the Ancient Near East and around the world that many cultures used hallucinogenic materials and ingredients in order to get into some kind of religious ecstasy,” he said. “We never thought about Judah taking part in these cultic practices.”

“The fact that we found cannabis in an official cult place of Judah says something new about the cult of Judah.”

The residues were identified with help from bioarchaeologist Dvory Namdar of Israel’s Agricultural Research Organization in Bet-Dagan. The smaller altar was found to have been used for cannabis mixed with animal dung, while the larger one held the frankincense. 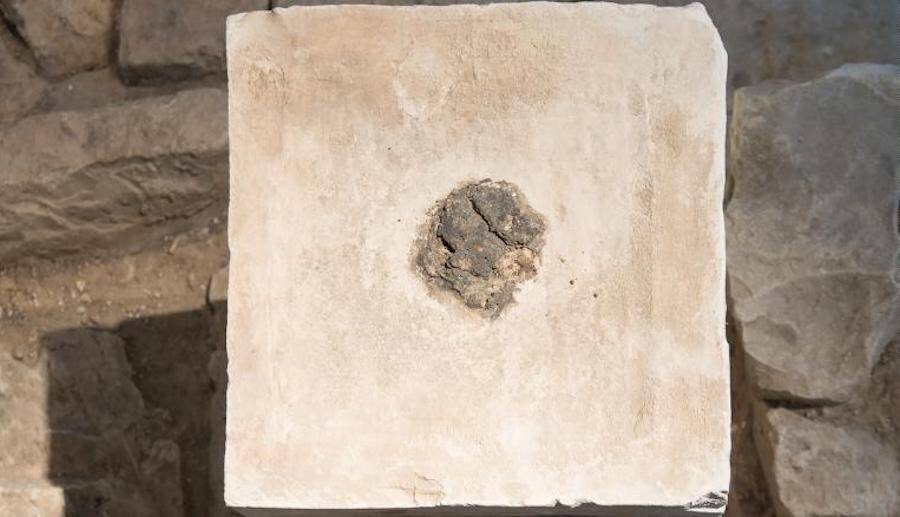 Israel MuseumFrankincense has been described in historic records as having been as valuable as gold or precious gems. Thus, using it regularly at Tel Arad was likely of extreme importance.

The Biblical cannabis contained enough tetrahydrocannabinol (THC) to have been psychoactive, with only inhalation of the fumes necessary to feel its effects. According to IFL Science, the value of frankincense as reflected in the Bible was regularly equated with that of gold or precious gems.

The dry tree resin was found to have been mixed with animal fats, which allowed it to burn at higher temperatures. Both frankincense and myrrh, another form of tree resin, have been well-documented in Biblical and historical texts before, as a result of trade through southern Arabia.

“But cannabis is completely new for understanding incense burning in this region, and in Judah in particular,” said Arie.

While it remains unknown how cannabis arrived in Tel Arad, archaeobotanist Robert Spengler of Germany’s Max Planck Institute for the Science of Human History believes early Silk Road trade routes from central and eastern Asia did the trick.

For Shimon Gibson of the University of North Carolina at Charlotte, this fascinating research has opened brand new doors of perception. This is, after all, the first direct evidence that frankincense and cannabis were burned on Iron Age altars in the Middle East – with countless other sites resembling them.

“It’s interesting to think of the priests officiating at these altars getting high,” he pondered.

After learning about the oldest known instance of ritualistic cannabis use being discovered at Israel’s Tel Arad shrine, read about study that found chemotherapy is more effective when used alongside cannabis. Then, learn about psilocybin mushrooms potentially holding the key to treating PTSD and depression.