Embolism, Overdose, Or Suicide: Inside The Mysterious Death Of Frida Kahlo

On July 13, 1954, Frida Kahlo died at 47 at her home in Mexico, but suspicious details have some convinced that her death was a covered-up suicide.

She’s been dead for decades but you’ve probably seen her around: on dishware, tote bags, and even socks. Frida Kahlo’s personal style and distinct artwork have made her one of the most recognizable artists of the 20th century.

Kahlo’s art deftly blended her personal reflections and her deepest insecurities with a vivid and surreal imagination. Although she created a distinguished body of work, the celebrated Mexican artist died young on July 13, 1954, at the age of 47.

Frida Kahlo’s cause of death was officially listed as pulmonary embolism, but no autopsy was performed — and some suspect she died from an overdose. As with many famous figures, conspiracy theories around Frida Kahlo’s death quickly accumulated, fascinating the public almost as much as her life.

Here is the true story behind the death of Frida Kahlo. 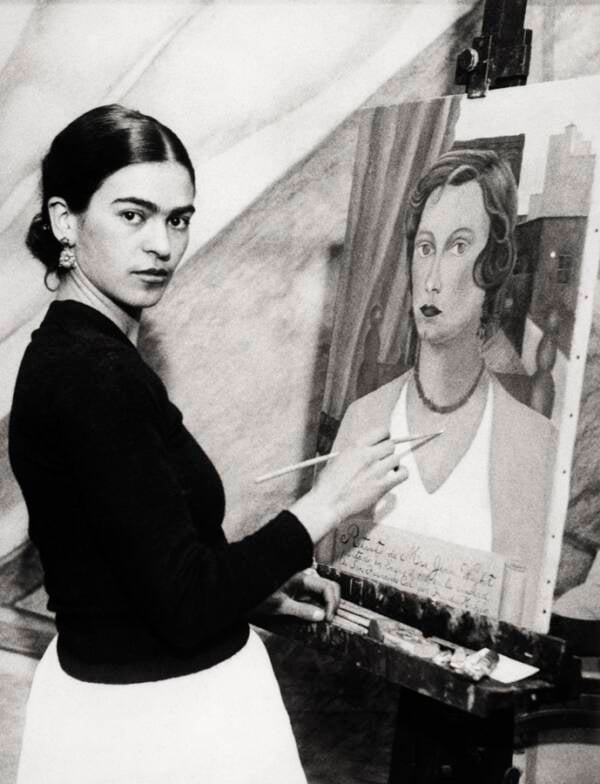 Getty ImagesA young Frida Kahlo as she paints one of her earliest pieces.

Frida Kahlo was born as Magdalena Carmen Frieda Kahlo y Calderón on July 6, 1907. She had a comfortable upbringing in Mexico as the third of four daughters.

Her mother, Matilde Calderón, was a devout Catholic of mixed Indigenous and Spanish heritage. Her father, Guillermo Kahlo, was a German immigrant. Frida Kahlo shared an incredibly close bond with her father who readily encouraged her creativity — including her penchant for photography and gender-bending fashion.

At six, Frida Kahlo was diagnosed with polio. The disease withered her right leg and stunted her right foot, but she still enjoyed a fairly active life through sports, until a terrible accident that occurred when she was 18.

A bus collided with a streetcar and Kahlo was impaled by a steel handrail during the crash. The rail went straight through her body near her hip resulting in horrendous physical injuries. Her spine and pelvis were shattered.

In her grueling recovery, she was unable to sit up straight for months and was required to wear a stabilizing corset made out of hard plaster.

Although she was eventually able to walk again, the severe injuries Kahlo sustained impacted her for the rest of her life. The physical and emotional toll of the accident heavily influenced her art.

Other influences in Kahlo’s work include her mother’s native background — evident in the Indigenous elements infused within her paintings — and her turbulent marriage with Diego Rivera, the famed Mexican muralist who was 20 years her senior. 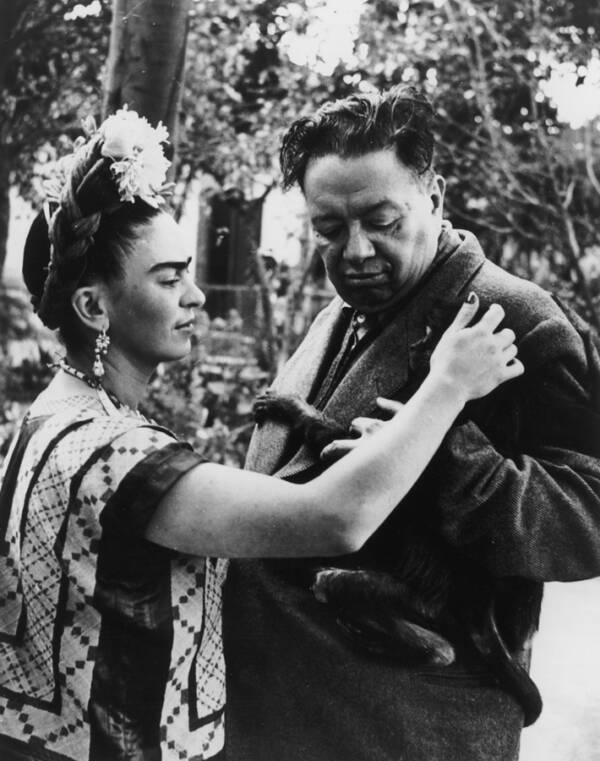 Their famous relationship was strained by their strong personalities, rampant infidelities, and issues of infertility — possibly a result of Kahlo’s extreme injuries. During their marriage, Kahlo had affairs with Leon Trotsky, Josephine Baker, and Georgia O’Keefe.

The couple met in 1928 and were married the next year. Though the two divorced in 1939, they reconciled and remarried in 1940 and remained together until Frida Kahlo’s death.

During her life, Kahlo produced an estimated 200 paintings using her distinct style of natural surrealism. Among her most esteemed works are The Two Fridas (1939), Self-Portrait With Thorn Necklace and Hummingbird (1940), and Broken Column (1944), all of which are self-portraits.

“The only reason I go on living is to paint and to love,” she once said. Despite her fragile health, Kahlo produced incredible artwork and continued her involvement in political causes up until her death.

How Did Frida Kahlo Die? 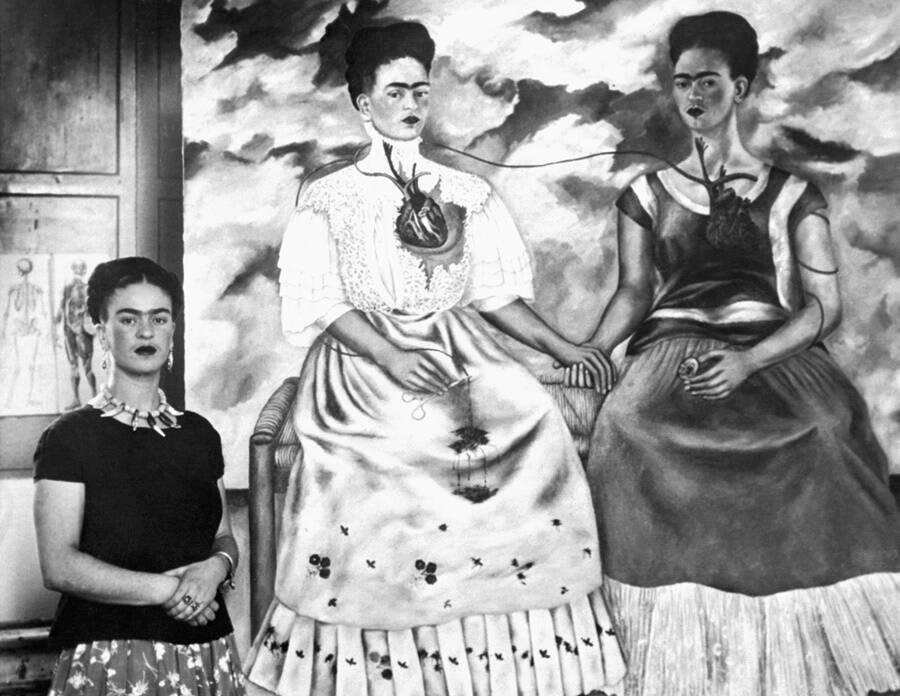 Getty Images“I don’t paint dreams or nightmares, I paint my own reality,” Kahlo said of her unique surrealist style.

In 1953, Kahlo’s leg was amputated from the knee down due to complications from one of her countless surgeries. Her health worsened as she aged — and Kahlo’s heavy use of pain medication and drinking habits didn’t help.

Kahlo’s health declined rapidly during her last days. Hints of her fading vitality are reflected in her final painting Self-Portrait Inside a Sunflower (1954) which lacks the meticulous brushstrokes that typically distinguish her work.

Yet Kahlo remained active up until the end. A few days before her death, Kahlo mustered the strength to attend a rally in her wheelchair to protest the CIA-backed coup d’état against the democratically-elected Guatemalan President Jacobo Árbenz. Shortly after the rally, on July 13, 1954, Kahlo died at the age of 47.

How did Frida Kahlo die? Although a pulmonary embolism was listed as the official cause of Frida Kahlo’s death, suspicions remain. The lack of a proper autopsy and a rushed cremation created intense skepticism surrounding her true cause of death.

Some suspect the artist actually died of a suicide from overdosing. The suicide theory is further fueled by a diary entry she wrote in which she confessed frustration over her deteriorating health, punctuated with a drawing of a black angel. The entry was dated a few days before her death:

“They amputated my leg six months ago, they have given me centuries of torture and at moments I almost lost my reason. I keep on waiting to kill myself. I hope the exit is joyful and I hope never to come back.”

Those who believe that suicide was the cause of Frida Kahlo’s death point to the fact that Kahlo, known for her immense zest for life, was struggling at the end.

“She was unable to paint as before…she was not able to hold her paintbrush steady enough or long enough to finish it. So she destroyed her own creation, and with it she took her own life,” wrote playwright Odalys Nanin.

The mystery of the cause of Kahlo’s death inspired Nanin — who, as a queer Mexican artist, feels a kinship with Kahlo — to write the play Frida: Stroke of Passion which premiered in February 2020. Nanin’s show centers around Kahlo’s eccentric life and the uncertainty of her death.

“I explored her pain, fears, and lovers, her fervor for Diego Rivera and her paintings. But most of all I revealed the cover-up behind her death,” Nanin wrote of the play.

Still, such theories remain only suspicions.

How Her Artistic Legacy Lives On 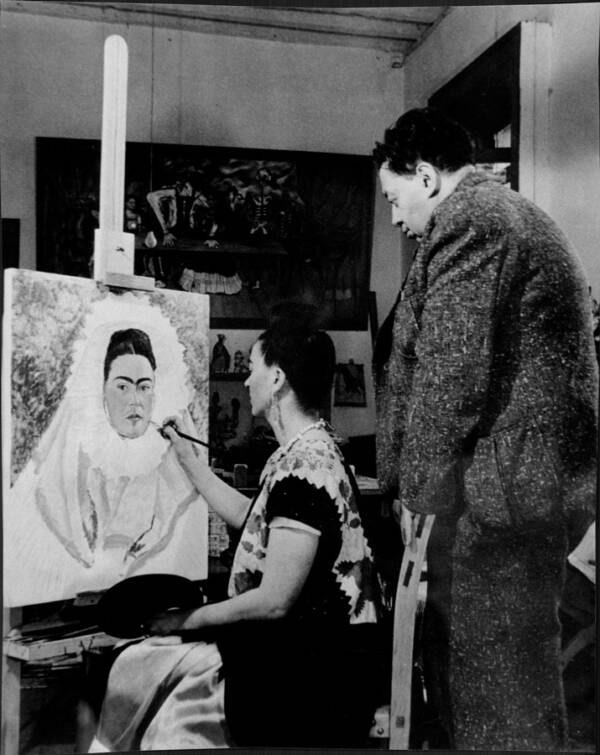 Dan Brinzac/New York Post Archives /(c) NYP Holdings, Inc. via Getty Images“I recommend her to you, not as a husband but as an enthusiastic admirer of her work, acid and tender, hard as steel and delicate and fine as a butterfly’s wing,” Diego Rivera once wrote to a friend.

Frida Kahlo’s bold surrealism conveyed her deepest insecurities — including her inability to conceive a child, the paralyzing pain from her disability, and her queerness — and was considered groundbreaking work. Perhaps this is why her work continues to resonate after her mysterious death. 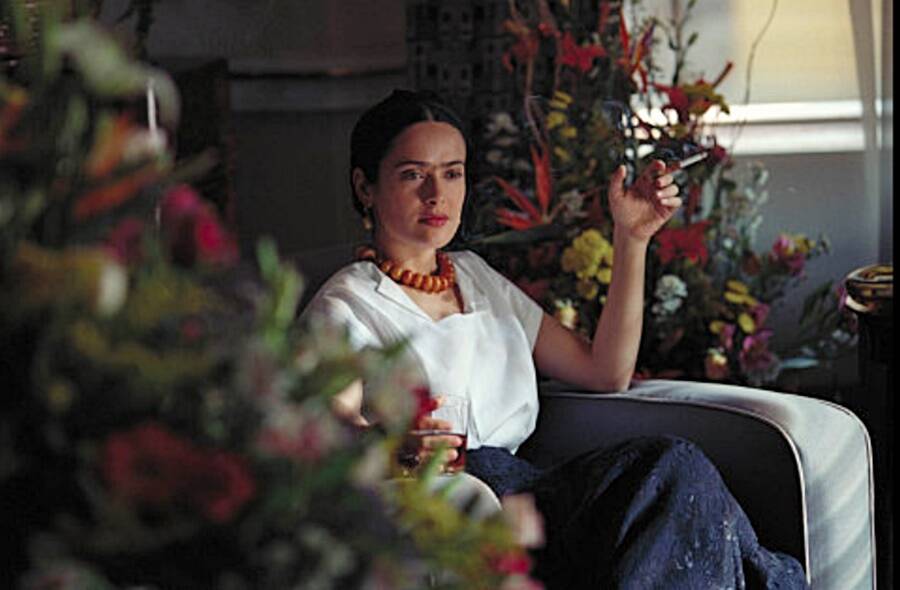 IMDBThe 2002 film Frida starring Salma Hayek is just one of the many ways the artist’s life and work have been immortalized.

The adoration Frida Kahlo’s work receives today is something that many artists deeply desire themselves. But when does adoration turn into commodification?

The obsession around Kahlo’s image has spawned discussions around the artist’s legacy which some argue has been spun into an egregious form of capitalism — a system that Kahlo opposed during her life.

How Frida Kahlo died remains a mystery. But it’s clear that while alive, she created an impressive body of work, so uniquely her own, that will never be forgotten.

Next, hear Frida Kahlo’s voice in what is believed to be the only known audio recording of her speaking. Then, learn how artist Artemisia Gentileschi avenged her rape through painting.