How Did Genghis Khan Die? Why The Mongol Leader’s Death Remains Mysterious Today

When Genghis Khan died in 1227, rumors spread that he perished heroically in battle or was castrated by a princess, but modern researchers believe that the Mongol conqueror’s death was far more mundane.

Genghis Khan’s death has been the subject of scholarly debate for nearly 800 years. The story of his brutal reign as the founder of the Mongol Empire is well documented. His death, however, remains largely mysterious. To this day, historians are still asking: how did Genghis Khan die?

Scholars generally agree that Genghis Khan died in his mid-60s in August 1227, according to a 14th-century text known as The History Of Yuan.

The document stated that he died eight days after feeling ill, but experts are still unsure what sickness exactly killed him. Some believed typhoid was the culprit, while others believed he succumbed to battle-related injuries, like an infected arrow wound or a deadly fall from his horse. Others professed that a princess he held captive had fatally castrated him. 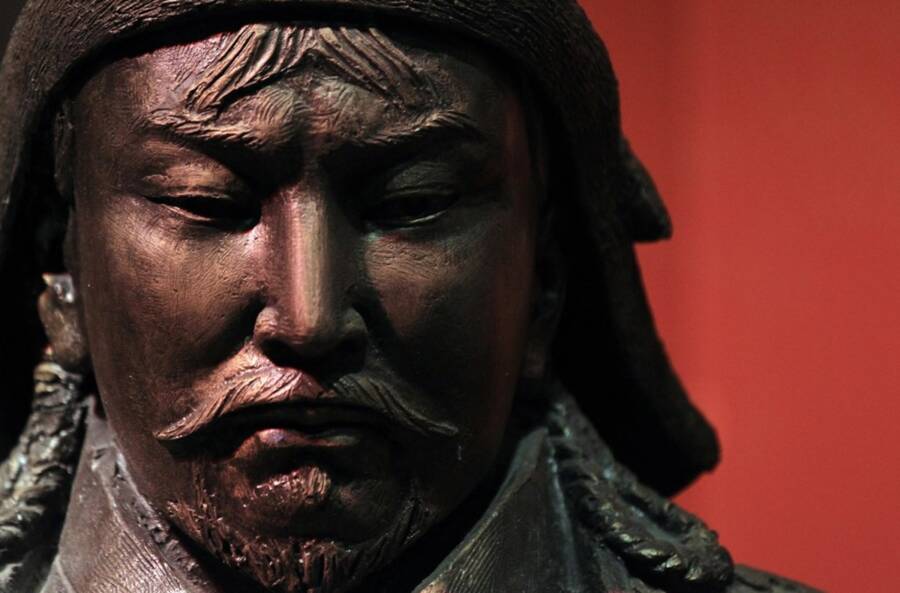 However, new research has suggested that all these explanations for Genghis Khan’s death were mere legend — and intentionally spread by Khan’s cronies.

So how did history’s greatest conqueror actually die? 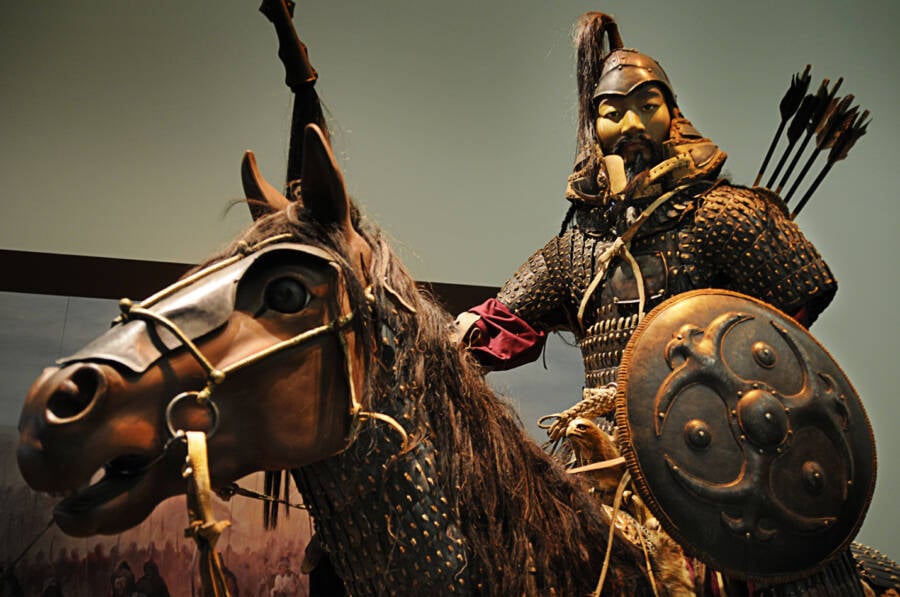 The name Genghis Khan, or Chinggis Khan, is world-famous, but the notorious Mongolian ruler was actually named Temujin. Born around 1162 in Mongolia, he was christened in honor of a Tatar chieftain that his father had captured.

He was also descended from Khabul Khan, who had briefly united Mongolia against China in the early 1100s, and showed similar potential.

Genghis Khan was born with a blood clot in his hand, which regional folklore implied was a sign of future leadership. It was at the age of nine when his father Yesukhei was killed by the Tatars, that Khan was forced to step into his shoes.

In order to do so, however, he was forced to kill his half-brother.

Khan’s legacy of uniting regional tribes to create a consolidated and powerful Mongolia began with his marriage to Borte, a woman of the Konkirat tribe and with whom he fathered four sons.

His legacy as a man whose DNA can be found in one in 200 men today, meanwhile, began with the Mongolian customs of polygamy. As Khan’s power grew larger, so did his harem.

He also eliminated any competition. After temporary enslavement by the Taichi’uts at 20, he grew an army of 20,000 men by uniting with numerous clansmen to destroy the Tatar army for good. He ordered that every male taller than three feet be murdered, and then he boiled their chiefs alive. 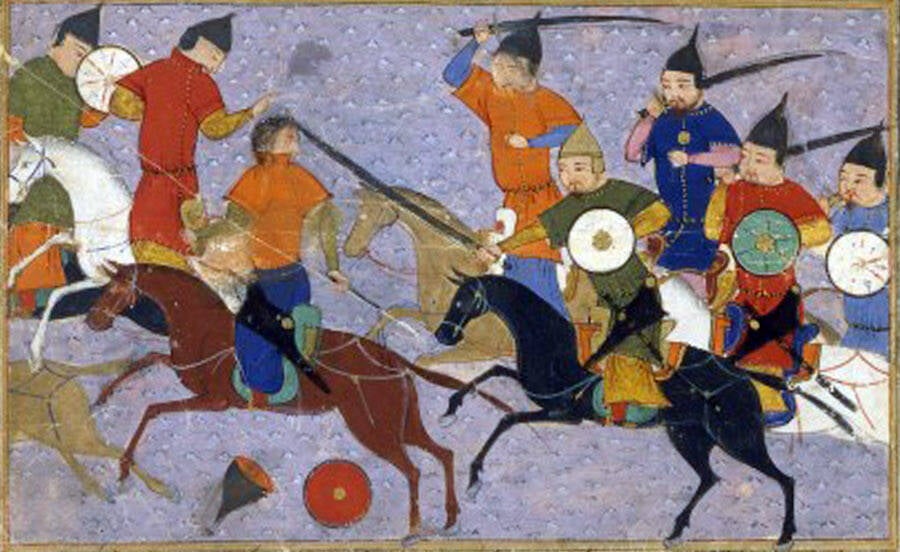 Genghis Khan not only employed spies across Northeast Asia, but he also used flag and smoke signals to coordinate ambushes and ordered his men to carry a bow with arrows, shields, daggers, and lassos. By 1206, his 80,000-man army controlled eastern and central Mongolia.

His cavalrymen learned how to ride horses without using their hands, which allowed them to use lances with hooks to pull people off their horses and throw javelins while galloping.

Upon defeating all rival Mongol tribes around 1207, Khan was officially crowned Genghis Khan, or “universal ruler” — and supreme god of his people.

But with a booming population, the food supply turned scarce. By 1209, Khan thus turned his attention to China and its bountiful rice fields.

How Did Genghis Khan Die? 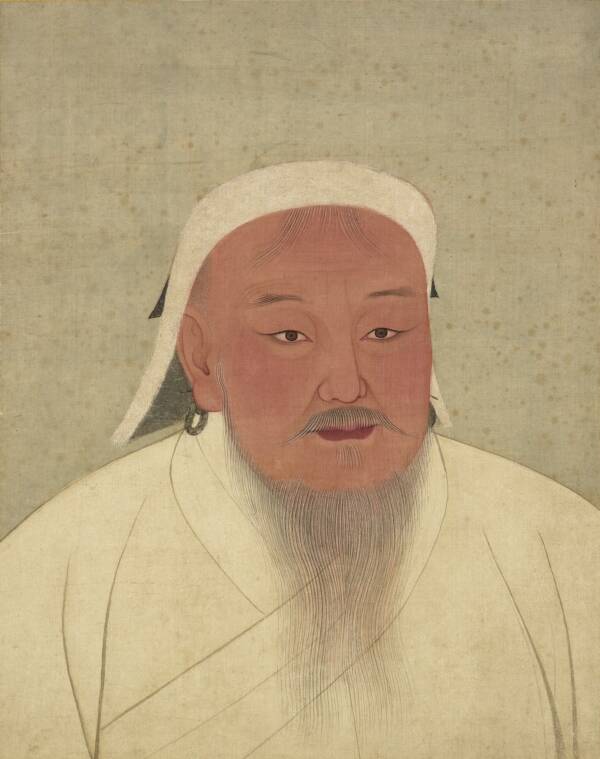 Wikimedia CommonsGenghis Khan died in his mid-60s of what historians now think was bubonic plague.

Genghis Khan conquered the empire in northwestern China known as Western Xia rather swiftly which was followed by his takeover of the Jin dynasty. But his battle for their rice fields proved more difficult and took nearly 20 years to win.

In 1219, he had become desperate to tackle the Khwarizm Dynasty in the Middle East. Its leader had killed one of his diplomats and sent back the decapitated head. When Khan demanded that the conquered Western Xia and Jin Dynasty help him defeat the Khwarzim, they refused — and formed a coalition against him instead.

Genghis Khan forged ahead without them and launched a ruthless three-prong attack with 200,000 men against the Middle Eastern dynasty. He piled the skulls of men, women, and children on mounds in every city he destroyed. After defeating them in 1221, however, he turned his full attention to the Western Xians who had defied him.

He then fell ill during this time and, according to experts from Flinders University in Adelaide, he hid his impending death from his empire so that they wouldn’t lose faith in their campaign against Western Xia.

As such, tales of dying in battle or by infection were spread. 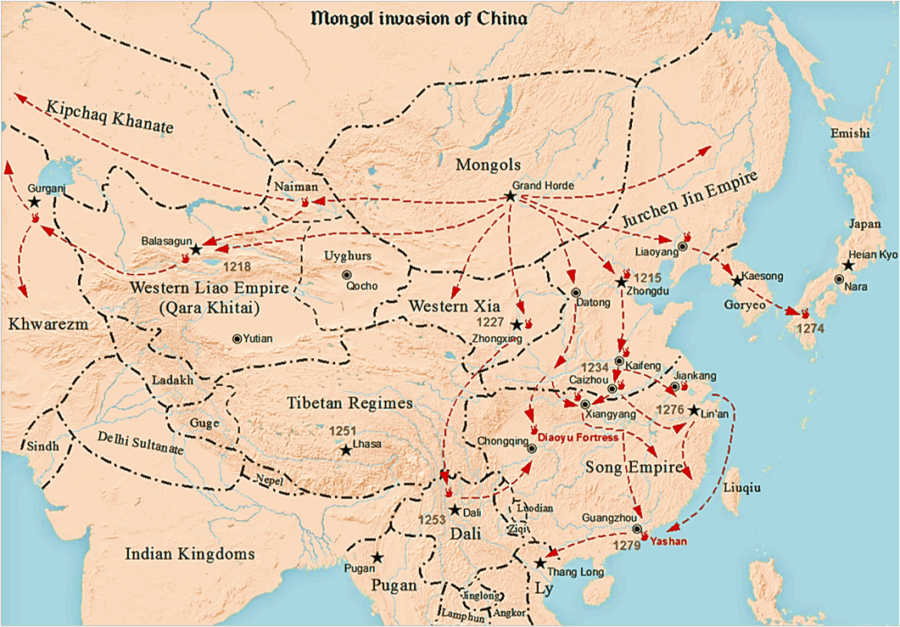 Wikimedia CommonsA dated map of the Mongol invasion of China.

“All these legends were most likely created at a later stage and failed to take into account — or even willingly ignored — an accepted historical fact,” a study published in the International Journal of Infectious Diseases said.

“Namely that Khan’s family and followers were instructed to keep Khan’s death as their most hidden secret, since it happened at the wrong time when the Mongols were at the vital stage of their desired conquest of Western Xia, the empire against which they had been fighting for over 20 years.”

The researchers turned to The History of Yuan to explore Genghis Khan’s death from a more evidence-based perspective. Though legends of the warrior dying from an arrow infection or being castrated and dying of blood loss had filled the air for centuries, this historical record contained more accurate data. 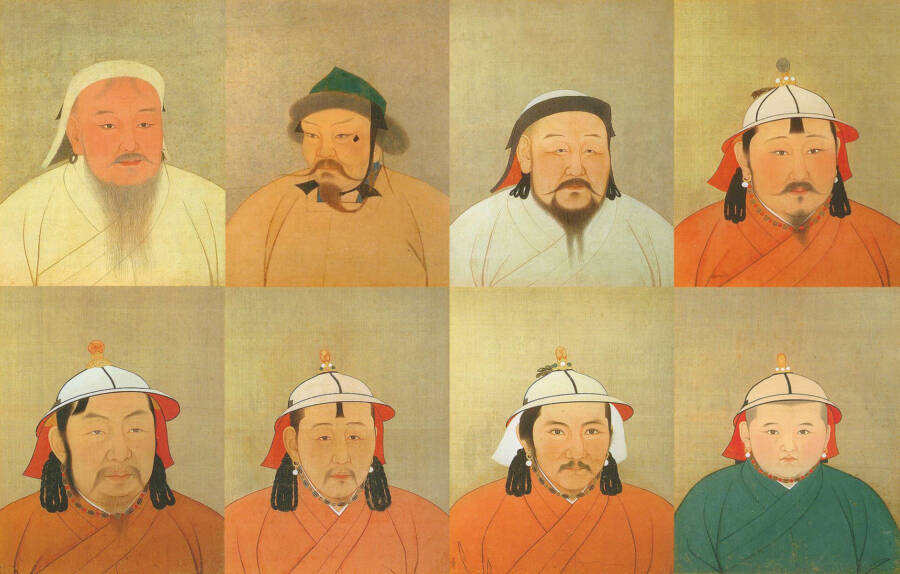 The document read that Genghis Khan fell ill on Aug. 18, 1227, and suffered from a fever until he died on August 25. Previous theories thus posited Genghis Khan died of typhoid, but The History of Yuan showed no evidence of any associated symptoms such as vomiting or stomach pain.

“Given the general circumstances of the disease gripping his army as early as 1226, suggest a more reasonable conclusion and retrospective diagnosis, that of plague, a most ancient, history-changing and still present disease,” the study argued.

The researchers added that The History Of Yuan‘s “vague terminology used to describe the king’s symptoms and the duration of the illness make it more reasonable to opt for bubonic plague.” Remarkably, it took nearly a millennium to arrive at this particular diagnosis.

And while the mystery behind how Genghis Khan died might be solved, the location of his final resting place remains unknown. 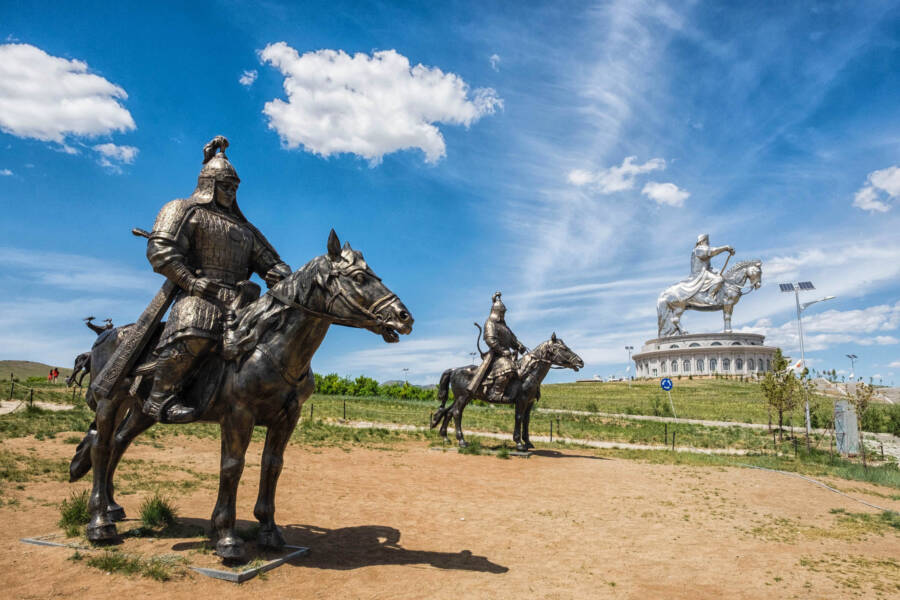 When Genghis Khan died, the Mongol Empire spanned from modern-day North Korea to Eastern Europe, and from central Russia to Iran. Genghis Khan died in his mid-60s and had left his empire in the hands of successive descendants who reigned until its disintegration in the 14th century.

Folklore maintains that Genghis Khan demanded any remaining Western Xia be killed. During his funeral procession to the Mongol capital of Karakorum, his men butchered anyone who dared track their convoy. Whether or not that happened, his tomb has never been found.

Some believe that Khan’s men followed local customs of the Eurasian Steppe and buried Khan in a tomb as deep as 65.6 feet. If true, those customs would have left his grave unmarked — save for a stone marker surely lost over time.

Genghis Khan’s legacy is one of a ruthless warrior who dominated unimaginable amounts of territory. He slaughtered about 40 million people and reduced the population of Earth by 11 percent. While unproven, it’s suggested he was buried on the Mongolian mountain of Burkhan Khaldun — though no “x” marks the spot.

After learning about Genghis Kahn’s death, read about the Russian “city drowned in blood” by the Mongols. Then, learn about Genghis Khan’s grandson Kublai Khan.