In 1859, San Francisco businessman Joshua Norton declared himself Emperor Norton of The United States. And it worked... sort of.

While we might think that Kanye West takes the cake when it comes to ego size and delusions of grandeur, Joshua Abraham Norton’s story gives Kanye a run for his money.

Norton was a much celebrated and possibly insane citizen of San Francisco who proclaimed himself Emperor of the United States in 1859. Not long after, he decided Mexico needed his help as well, so he added “Protector of Mexico” to his already made-up title. 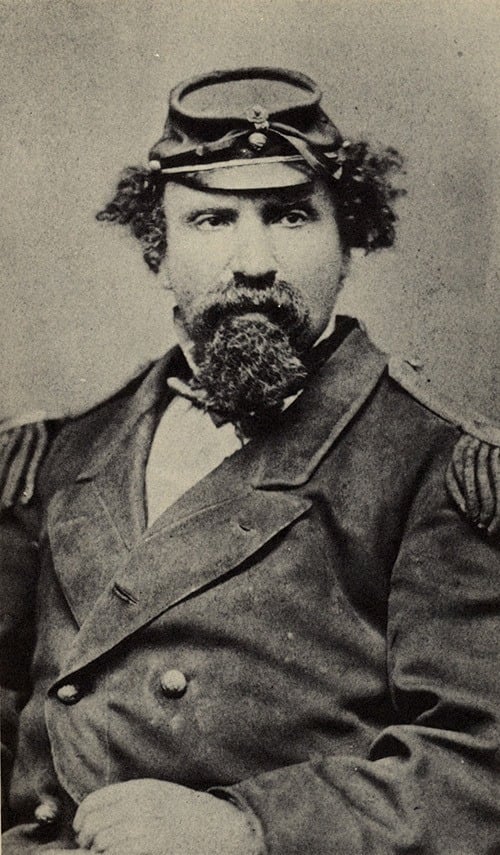 His self-righteousness could be seen in his attire, his decrees, and his statements on American society, particularly its practice in democracy. Born in England around 1819, Joshua Norton spent the majority of his childhood years in South Africa, which was a Dutch colony at the time. His imperialistic tendencies were no doubt cultivated in his childhood and they returned when he needed the ego boost the most.

Lured by the Gold Rush, he immigrated to San Francisco after receiving $40,000 inheritance from his father’s estate. He made a living as a businessman for a while, until he made a poor investment in Peruvian rice. He attempted to sue his rice dealer in order to void his contract and the case was sent to the California Supreme Court, which ruled against him. Ashamed and bankrupt, Norton ran away in self-imposed exile. 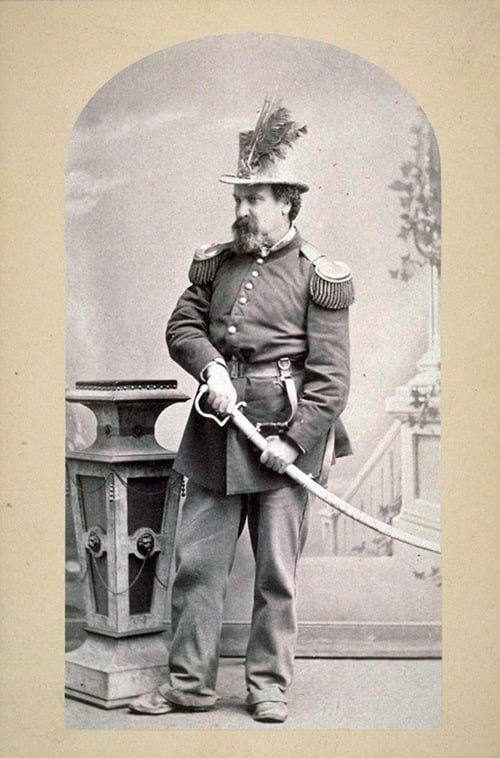 After some time, Norton returned to San Francisco with a chip on his shoulder. Always a fan of the British Empire and residing in the land of opportunity got him thinking, and he eventually declared himself Emperor Norton I. He then sent “official” notices to newspapers informing the people of their new Emperor. Initially, the news agencies got a pretty big laugh out of Norton, but he kept at it for 21 years and soon became a local legend. 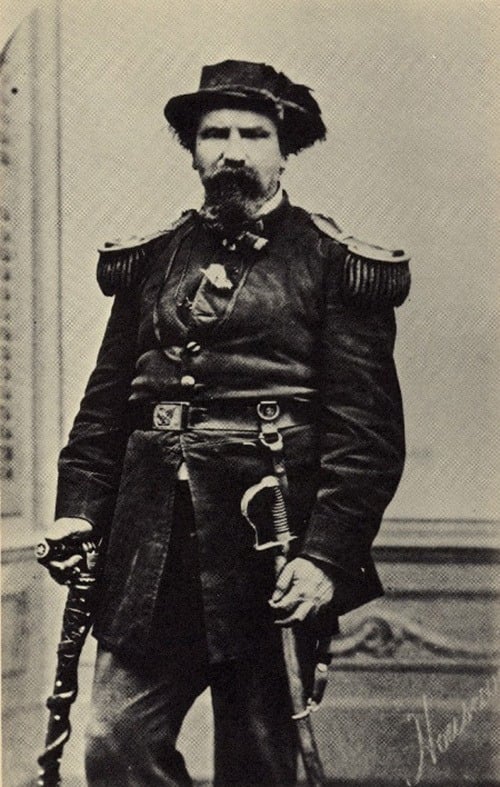 Some of that may have been due to his choice of attire. Norton dressed in a fancy blue uniform with gold epaulets given to him by the United States Army at Presidio, though he would later claim that Queen Victoria gave it to him. He topped this outfit with a beaver hat decorated with a peacock feather. Often, he carried a cane or an umbrella to mark his royal posture. 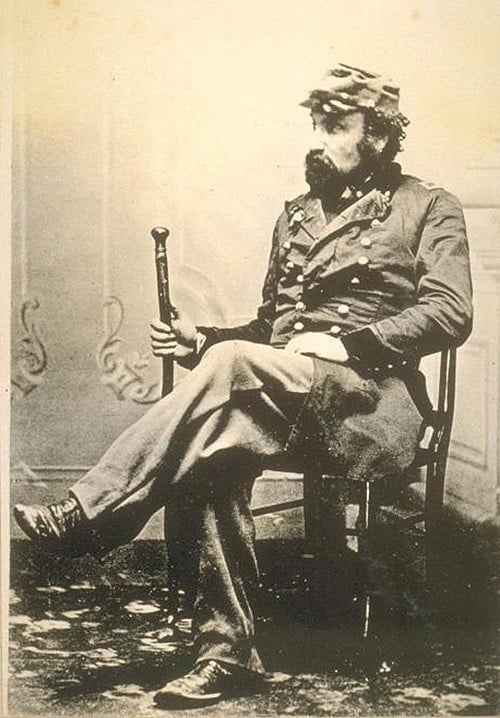 Norton issued many formal decrees while he was “in office.” He abolished the United States Congress on the grounds that “fraud and corruption prevent a fair and proper expression of the public voice…” He later summoned the Army to depose the U.S. Congress.

Obviously, the Army ignored those orders and continue to do so to this day. Emperor Norton also abolished the Democratic and Republican parties and mandated that people treat San Francisco with respect or pay a fine. While some of his decrees were absolutely ludicrous, he did have moments of clarity in which he expressed opinions and gave governing instruction that was intelligent and ahead of his time.

He expressly forbade any conflict between religions and their sects, pushing for peace and tolerance instead. He broke up an attempted attack against Chinese workers. He also published instructions on forming a League of Nations and fought for the construction of a tunnel or suspension bridge connecting Oakland to San Francisco. Unlike so many of his other decrees and edicts, this one actually came true when construction on the Bay Bridge began in 1933. 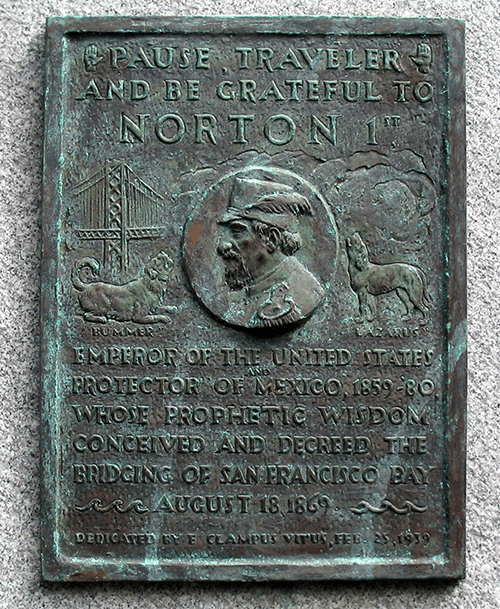 This plaque commemorates Norton’s role in the history of the Bay Bridge.

Joshua Norton was loved and honored by the people of San Francisco. He ate in the city’s finest restaurants for free, sometimes with two dogs by his side, Bummer and Lazarus. Though he did not own the dogs, cartoonist Edward Jump connected them in his work and the legend stuck. 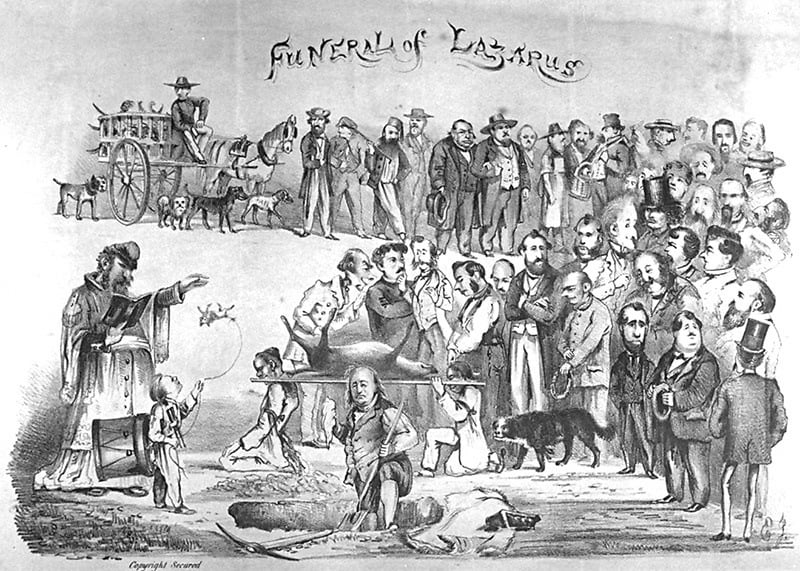 When Lazarus died, the city was deeply saddened and was eulogized in the newspaper.

In 1867, a police officer arrested Emperor Norton in an attempt to have him institutionalized. The police chief, who issued a formal apology, immediately released Norton, and stated, “he had shed no blood; robbed no one; and despoiled no country; which is more than can be said of his fellows in that line.” Following his release, Norton issued an Imperial pardon to the police officer that had arrested him. From that day on, police officers in San Francisco saluted Norton as he passed by. 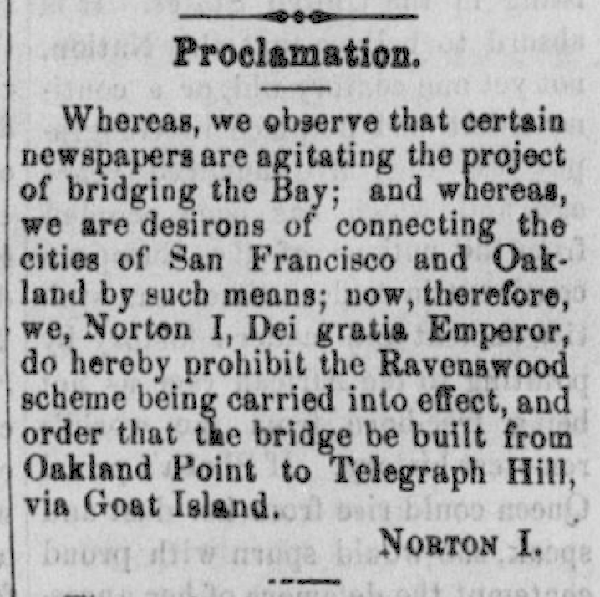 The Vallejo Chronicler claimed that Norton once told an acquaintance that he was actually of French royalty, a member of the Bourbon family who fled following the French Revolution. Emperor Norton was convinced his parents, John and Sarah Norton, gave him his Jewish name of Joshua to protect him from assassins. Others were convinced that he was just drinking bourbon. 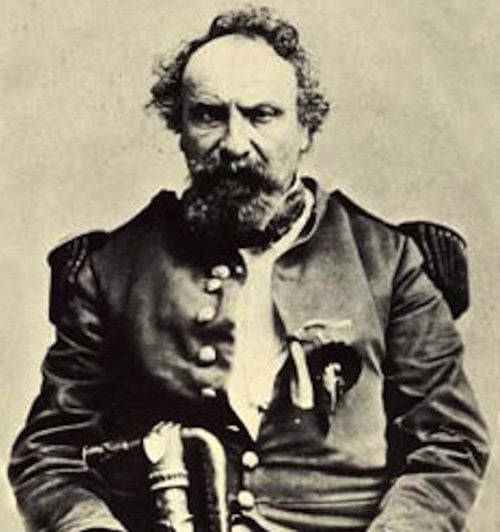 On January 8, 1880, Norton collapsed in the street while en route to a lecture at the California Academy of Sciences. Amid rumors of hidden wealth, he actually died penniless.

Among the few items found in his room at a boarding house were his collection of canes, various hats, a fake telegram supposedly from Emperor Alexander II of Russia congratulating him on his marriage to Queen Victoria, and an 1828 French franc. His poverty would have prevented a grand funeral, if the Pacific Club, a businessmen’s association, had not set up a funeral fund to give Emperor Norton the distinguished burial he deserved.

Norton was buried in the Masonic Cemetery at the expense of the city; 10,000 people attended. In 1934 his remains were transferred to a lovely plot at Woodlawn Cemetery in Colma. 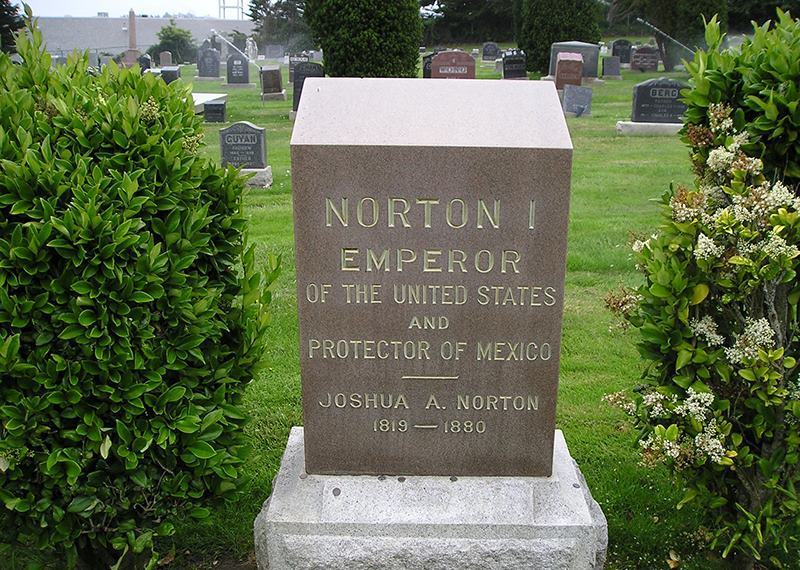 His tombstone reads “Norton I, Emperor of the United States and Protector of Mexico.” Emperor Norton would eventually be turned into a gay icon when drag queen and early gay activist Jose Sarria proclaimed himself Empress and “The Widow Norton.” Norton is also named as a Saint in the Principia Discordia, the primary text of the Discordian religion.

After this look at Emperor Norton, read up on some other of the greatest folk heroes in American history, including Annie Edson Taylor.