The True Story Of Blackbeard, The Fearsome Pirate Who Ruled The 18th-Century Caribbean

Calling himself "Blackbeard," English pirate Edward Teach terrorized the Caribbean between 1716 and 1718 until he was ultimately beheaded in battle. 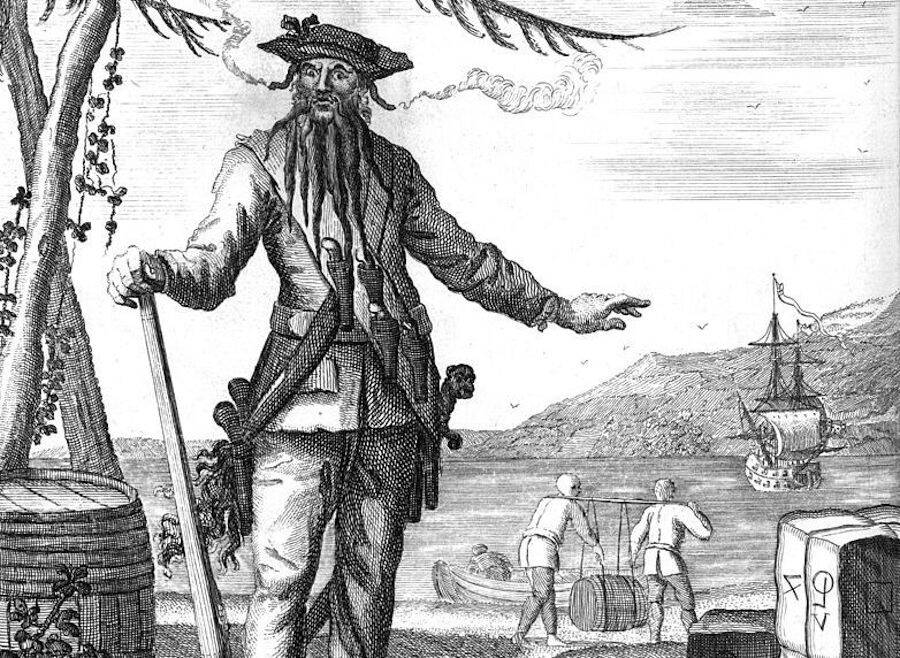 In the early 1700s, it took only one word to strike fear into the hearts of men on the high seas: Blackbeard. The notorious pirate, whose real name was Edward Teach, had a ruthless reputation. Nothing good ever happened when his ship Queen Anne’s Revenge appeared on the horizon.

Though Blackbeard only terrorized the high seas for about two years, his legacy has endured for centuries. The pirate’s name has been featured in countless books, movies, and TV shows. His massive scores in the Caribbean remain the stuff of legend. And yet, few know the real story of Blackbeard.

So who was this fearsome pirate? And what led to his death in 1718?

The Early Life Of Edward Teach 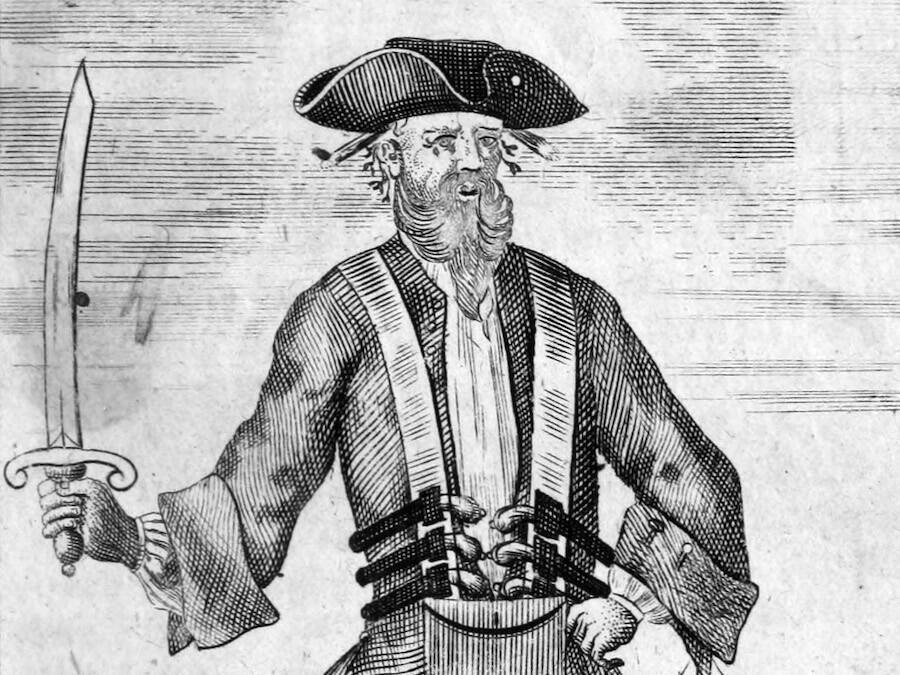 Little is known about Edward Teach — even his name, which has also been spelled Thatch, Thach, Tack, and Theach.

But according to records, Teach was likely born around 1680. And in A General History of the Pyrates by Captain Charles Johnson, Blackbeard is described as “a Bristol Man born,” implying that he was from England.

However, other sources suggest that Blackbeard could have been born in Jamaica, North Carolina, or Philadelphia.

In fact, one maritime historian and genealogist named Baylus Brooks believes that he’s found documents that prove Blackbeard lived in Jamaica. Brooks started to poke around Ancestry.com and found out that a family named Thache was living in Spanish Town, Jamaica in 1700.

Significantly, an English visitor to Jamaica once even described meeting Blackbeard’s family in Spanish Town in 1739.

Brooks suspects that Edward Teach was born in Bristol, but was then brought to Jamaica at a young age. Many Europeans flocked to the Caribbean island in hopes of making it rich in the sugar industry.

So how did Edward Teach — or Thache — become a pirate? Scholars suspect that Teach initially pursued a vocation in the Royal Navy. He likely served in Queen Anne’s War (also called the War of Spanish Succession).

But after a fleet of Spanish ships sank off the coast of Florida in 1715 — leaving their holds full of treasure up for grabs — Teach realized that he could get rich quickly by simply plundering all of the silver left behind.

Before long, he developed a fearsome reputation as a pirate.

Blackbeard’s Life As A Pirate 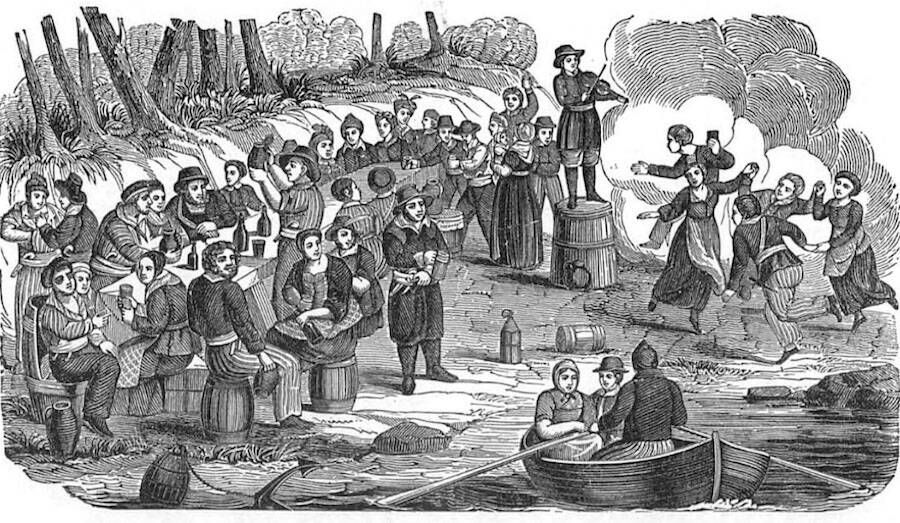 Wikimedia CommonsA depiction of Blackbeard’s crew celebrating with another pirate crew on the coast of Carolina.

At first, Edward Teach served under the command of another pirate named Benjamin Hornigold. And Teach apparently impressed his “mentor,” because Hornigold rewarded him with his own ship in 1717.

Teach promptly renamed the ship Queen Anne’s Revenge, stocked it with 300 men and 40 guns, and set about building his fearsome reputation.

To intimidate other ships, Blackbeard hoisted an original flag, which depicted a heart dripping blood and a skeleton holding an hourglass and sphere.

He also cultivated his own image by arming himself with multiple weapons and making sure he looked as terrifying as possible. In A General History of the Pyrates, Johnson describes Blackbeard as wild-looking and dangerous. 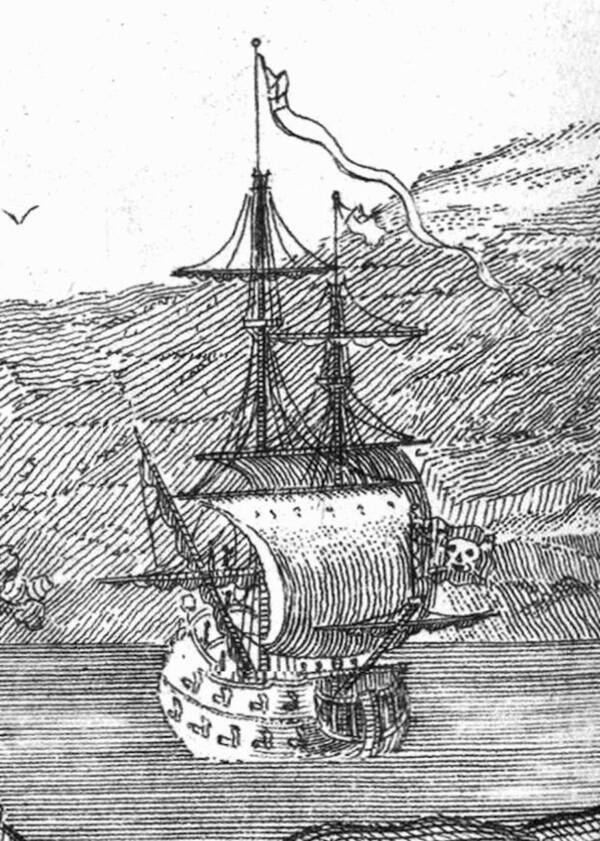 “In Time of Action, he wore a Sling over his Shoulders, with three brace of Pistols, hanging in Holsters like Bandaliers,” Johnson wrote.

“[Blackbeard] stuck lighted Matches under his Hat, which appearing on each Side of his Face, his Eyes naturally looking fierce and wild made him altogether such a Figure, that Imagination cannot form an Idea of a Fury, from Hell, to look more frightful.”

He reportedly wed 14 times, drank mixtures of rum and gunpowder, and had an unpredictable temper that could explode at any given moment. Blackbeard once even allegedly shot his first mate because “if he didn’t shoot one or two [crewmen] now and then, they’d forget who he was.”

For about two years, Blackbeard and his crew plundered every ship they came across near the West Indies and Colonial America. They stole valuables, food, liquor, and even books. The Queen Anne’s Revenge once even blocked the port of Charleston, South Carolina.

But despite Blackbeard’s bloodthirsty reputation, there’s no evidence that he actually killed anyone during his crime spree. He preferred to rule by fear alone — and that was apparently enough to rattle colonists living in America. In 1718, the lieutenant governor of Virginia, Alexander Spotswood, decided that he needed to put an end to Blackbeard’s plundering ways for good.

How Did Blackbeard Die? 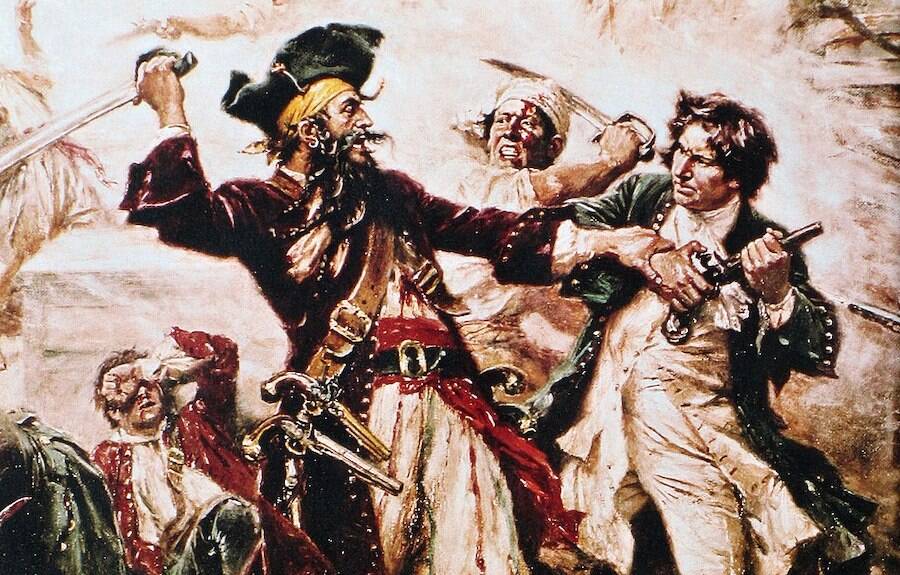 By late 1718, Blackbeard had begun to slow down. He’d scuttled Queen Anne’s Revenge in Beaufort Inlet, North Carolina — perhaps to cut down his crew — and traveled to Ocracoke Island on a sloop called Adventure.

Blackbeard didn’t know it yet, but a British naval lieutenant named Robert Maynard was hot on his tail. Spotswood had enlisted Maynard to take care of Blackbeard — and Maynard was determined to finish the job.

On November 21, 1718, Maynard and some other men in the British Royal Navy crept along the shallows of Pamlico Sound. Maynard eventually spotted Blackbeard’s ship and lay in wait. The next morning — after Blackbeard’s crew spent the night drinking — Maynard launched his attack.

At first, it seemed like Blackbeard might have the advantage. Maynard’s two ships, the Jane and the Ranger, quickly ran aground in the shallow water. And Blackbeard and the Adventure tried to flee, shooting as they went.

When Maynard pulled up beside him, he said that he’d take Blackbeard “dead or alive.” In response, Blackbeard called for a glass of wine. 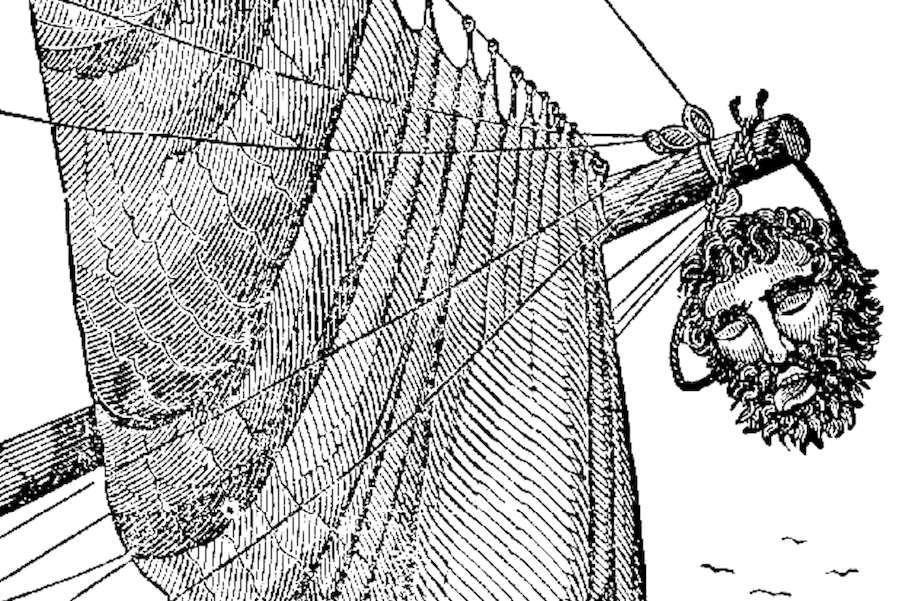 Wikimedia CommonsA depiction of Blackbeard’s decapitated head. The story of how Blackbeard died remains chilling to this day.

“At our first salutation,” Maynard later wrote, the pirate “drank damnation to me and my men, whom he styled sniveling puppies, saying, he would neither give nor take quarter.” Then, the fight truly began.

It was instantly clear that Blackbeard had superior firepower. But Maynard had a sharper wit. As the Adventure pulled alongside the Jane — the commander, second-in-command, and third-in-command on the Ranger had already been killed — Maynard ordered his men below deck.

There, he waited. And when Blackbeard took the bait and boarded the Jane with his men, thinking he won the battle, Maynard charged.

“Maynard and Teach themselves two begun the fight with their swords,” the Boston News-Letter later described. At one point, one of Maynard’s men, a Scottish highlander, leaped to Maynard’s defense. He cut Blackbeard’s face, then prepared to strike again. As the News-Letter said:

“With that he gave [Blackbeard] a second stroke, which cut off his head, laying it flat on his shoulder.”

The notorious Blackbeard, aka Edward Teach, was dead. And according to reports, the moments leading up to Blackbeard’s death were truly gruesome. Based on his wounds, the pirate had been shot at least five times and stabbed at least 20 times before he was ultimately decapitated.

The Legacy Of A Legendary Pirate 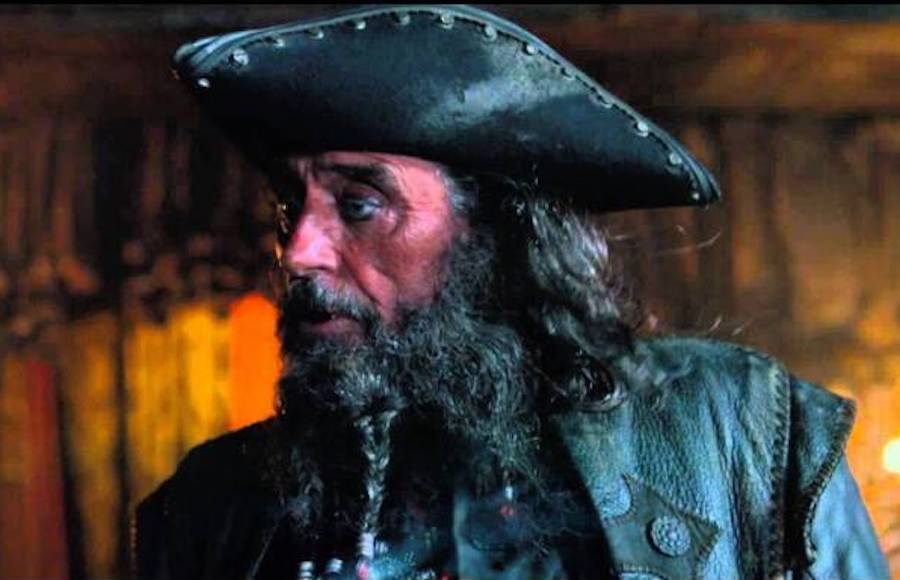 YouTubeBlackbeard as portrayed in the Disney film Pirates of the Caribbean: On Stranger Tides.

The legend of Blackbeard started shortly after his death. After Maynard’s men threw his corpse into the water, some claimed that his headless body swam around the ship seven times before it finally sank.

Apparently undisturbed by how Blackbeard died, Maynard’s crew sailed home with the pirate’s head stuck on the bowsprit of their ship. Some say that his skull was later adorned with silver and used as a punch bowl.

Even though Edward Teach’s piracy lasted only two years, he left an oversized reputation in his wake. The 1952 film Blackbeard the Pirate brought his story to new audiences in the 20th century, and the 2011 movie Pirates of the Caribbean: On Stranger Tides also featured the notorious pirate.

And his legacy isn’t limited to fiction. Back in 2008, Forbes estimated that Blackbeard had amassed a fortune of $12.5 million throughout his lifetime — which would be over $15 million in today’s dollars. While some believe that any loot that Blackbeard stole was uncovered shortly after his death, others maintain that his real treasure has yet to be found.

Ever since Blackbeard’s shipwreck of Queen Anne’s Revenge was finally discovered off the coast of North Carolina in 1996, archaeologists and treasure hunters have flocked to the site in hopes of finding the fortune.

In the years since, experts have unearthed hundreds of historic objects from this 18th-century ship, including cannons, bladed weapons, and restraining devices. But so far, no treasure has been found, except for less than an ounce of gold dust. Still, many believe the real treasure is still out there — and only time will tell if it’s ever uncovered.

Today, the pirate’s legend is so grand that it can be difficult to see the man — Edward Teach — behind his notoriety. But historians like Brooks are hopeful that more and more information about Teach could appear.

As Brooks puts it: “The real story of Blackbeard has gone untold for centuries.”

After learning the true story of Blackbeard, read about Anne Bonny, the fierce female pirate of the Caribbean. Then, take a look at Bartholomew Roberts, the most successful pirate of all time.