The Story Of Anne Bonny, The Sword-Wielding Pirate Who Ruled The Caribbean

One of the only female pirates in recorded history, Anne Bonny became a legendary marauder in the Caribbean during the 18th century. 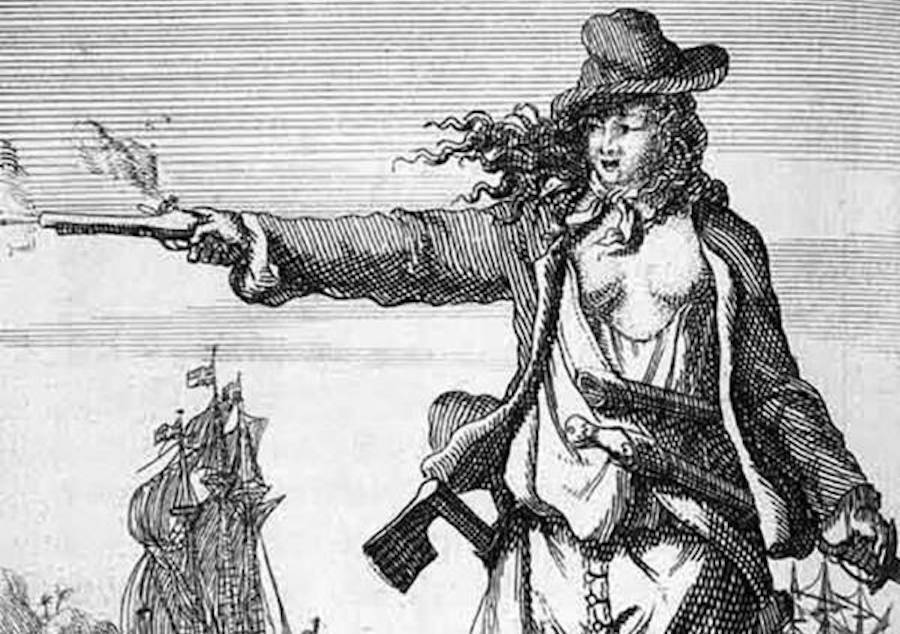 Library of CongressAfter Anne Bonny was arrested for piracy in 1720, her exploits at sea became the stuff of legend.

Women weren’t supposed to be pirates. In fact, many pirate ships that roamed the Caribbean during the 18th century had a very clear and specific rule: “No Boy or Woman [was] to be allowed amongst them.” But Anne Bonny was never one to follow the rules.

One of the few female pirates in history, Bonny was known for her striking red hair and green eyes, her quick, violent temper, and her friendship with Mary Read, another “lady pirate” who ended up on her ship by pure chance.

When their crew was attacked in 1720, Anne Bonny and Mary Read fought back while most of their male comrades cowered in fear. Some of them were far too drunk to even pick up their weapons. This led Bonny to scream, “Dogs! If instead of these weaklings I only had some women with me.”

This is the story of Anne Bonny — the fierce female pirate of the Caribbean. 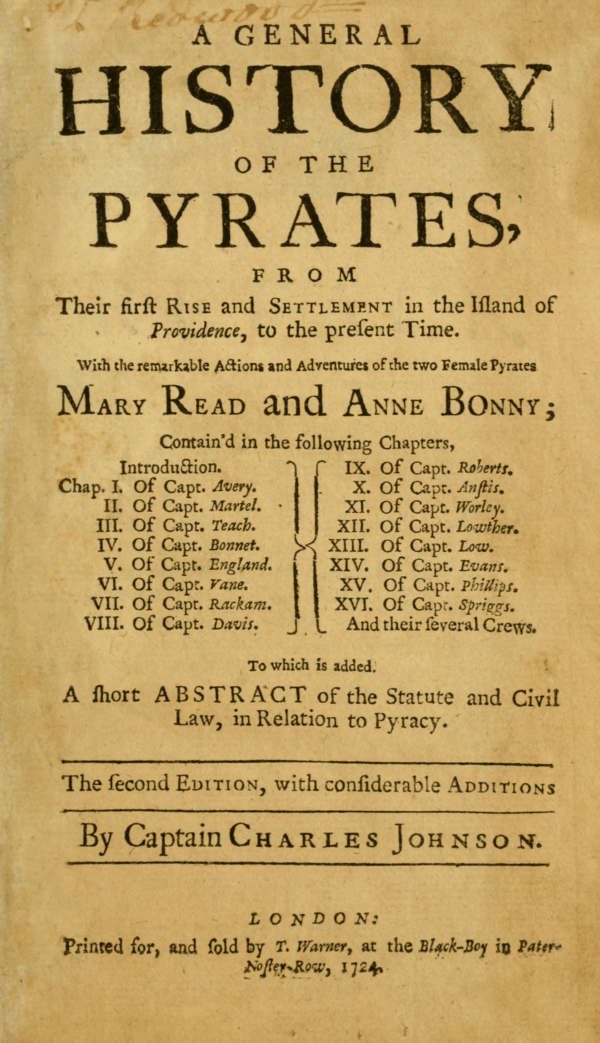 Public DomainAnne Bonny’s story was included in Captain Charles Johnson’s A General History of the Pyrates.

Anne Bonny was born around 1697 or 1698, near Cork, Ireland. From her first breath, Bonny defied convention. She was the child of William Cormac, a married attorney, and his maid, Mary Brennan.

Cormac, fond of the child but hoping to keep his marriage intact, dressed Bonny as a boy and kept her hair cut short. He introduced Bonny as “Andy.” To outsiders, he claimed that the “boy” was simply training to be his clerk.

But before long, the real truth came out. Fleeing the scandal, Cormac brought his mistress and his daughter across the Atlantic Ocean. They settled in today’s Charleston, South Carolina. Although Cormac thrived — eventually earning enough to buy a plantation — Mary Brennan was not so lucky. She died of typhoid fever in 1711.

Following her mother’s death, Anne Bonny’s “fierce and courageous temper” began to emerge. At one point, she allegedly stabbed a servant girl with a kitchen knife after an argument — and some accounts claim she killed her. Bonny also beat a man who tried to rape her to the point that he was near death. Johnson notes that Bonny’s attacker “lay ill of it a considerable time.”

Bonny also began to live a wild lifestyle, spending her nights in taverns and sleeping with drunks. Her father didn’t like her behavior, but he still thought that she could find a proper husband. Instead, Bonny picked a poor sailor named James Bonny and married him in 1718. Johnson described James Bonny as a man “who belonged to the Sea, and was not worth a Groat.”

Her father promptly disowned her. Undeterred by his disapproval, Bonny left the area for New Providence (now Nassau) in the Bahamas with her new husband. Fatefully, they were headed for a part of the world that was known at the time as the “Republic of Pirates.”

The Making Of A Fearsome Pirate 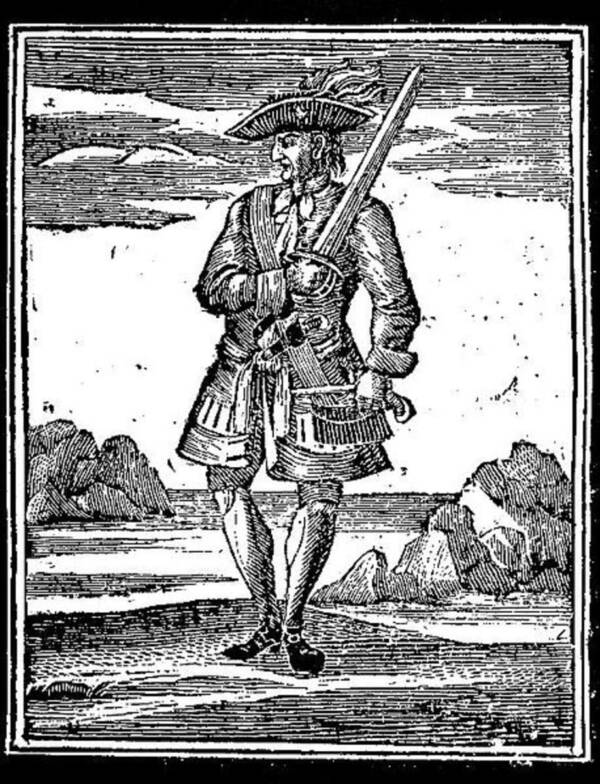 Anne Bonny quickly grew bored of married life. She and her new husband became disillusioned with each other. He thought that she would come with her father’s money. And Bonny thought that he would be a rule-breaker, like her. Instead, James Bonny had become a “snitch” for a living. He helped track down pirates and collected a bounty for doing so.

Johnson described Bonny as “not altogether so reserved in point of Chastity.” And it wasn’t long before her eye wandered. Her gaze landed upon a pirate captain named John “Calico Jack” Rackam. “She consented to elope from [Bonny],” Johnson wrote. “And go to Sea with Rackam in Men’s Cloaths.”

At the time, it was highly unusual for women to be pirates. One notable exception is the 16th-century pirate Grace O’Malley, who, like Bonny, was Irish. But most male pirates shuddered at the idea of letting women aboard, since they were thought to bring bad luck.

Rackam’s crew was not immune to this line of thinking. At one point, one of the pirates made the mistake of voicing his opinions about Bonny’s presence on the ship. As the story goes, she challenged him to hand-to-hand combat, stabbed him in the heart, and tossed his body overboard.

From then on, Anne Bonny was accepted as a member of the crew. Most of the time, in her capacity as Rackam’s lover, she wore women’s clothing. But Bonny dressed like a man whenever the ship went on the attack. She wore trousers and a tunic, armed with a sword at her hip and a pistol in her hand. 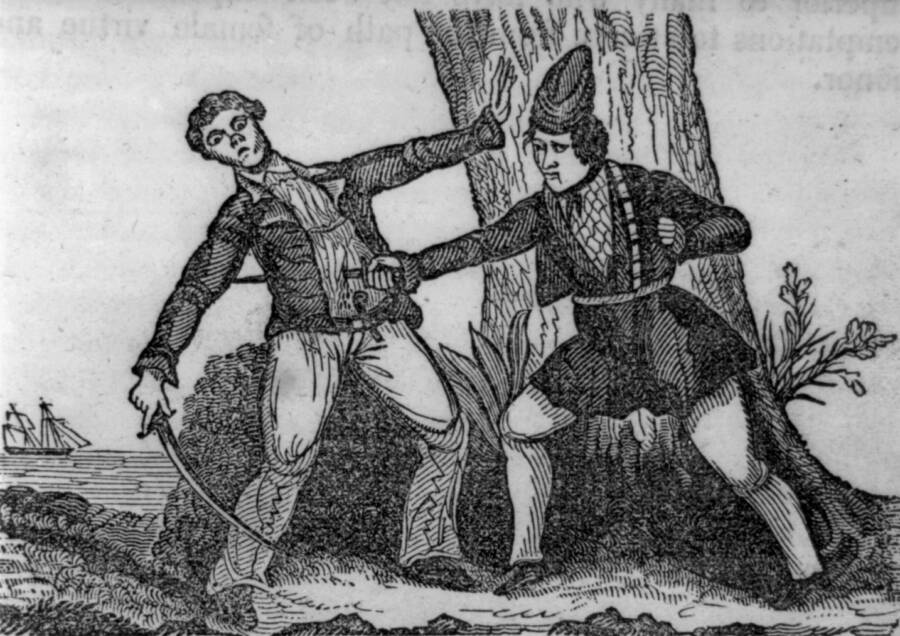 Library of CongressMary Read, depicted stabbing a foe in 1842.

Strange things can happen at sea. When Rackam conquered a ship in the West Indies, he followed the pirate code of conduct and invited his surviving foes to join his ship. No one knew it yet, but Rackam was about to add a second woman to his crew — Mary Read, who was dressed as a man.

Anne Bonny was intrigued by the new crew member. Johnson wrote that Bonny “took a particular liking” to Read, whom she perceived as a “handsome young Fellow.” For reasons “best known to herself,” Bonny revealed herself to Read as a woman. “To the great Disappointment of Anne Bonny,” Johnson said, “[Read] let her know that she was a Woman also.”

It’s possible that Bonny’s disappointment did not last long. Some accounts suggest that Anne Bonny and Mary Read became lovers on their voyage.

What seems clear is that, in Read, Bonny had found an equal — and someone she could relate to. Read, like Bonny, had a very strange childhood. She was also considered an “illegitimate” child. And on top of that, Read was also dressed as a boy and given a boy’s name — “Mark.”

But most importantly, Read was also fearless. In one anecdote, Johnson describes how Read — then in love with a gentle, male member of the crew — fought in a duel so that her lover won’t get hurt.

As Bonny and Read grew closer, Rackam became increasingly resentful. He believed that Mary Read was a man — a rival. “Furiously jealous,” Rackam threatened to cut Read’s throat. “Therefore,” Johnson wrote, “to quiet him, [Bonny] let him into the Secret also.”

Possibly, Rackam joined “the Secret” in more ways than one. Some accounts suggest that Read, Bonny, and Rackam formed a pirate’s ménage à trois.

Capture On The High Seas 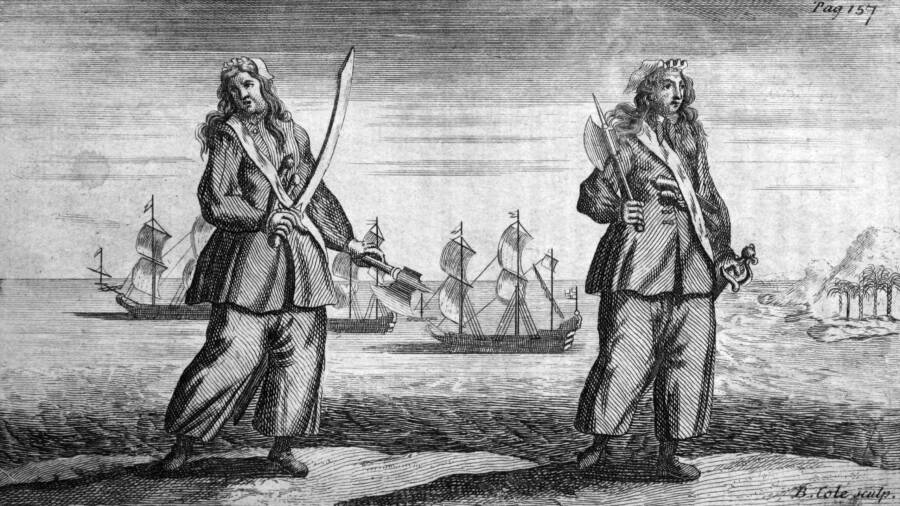 The Mariners’ Museum Research Library and ArchivesAnne Bonny and Mary Read, depicted in 1829.

Throughout the fall of 1720, Rackam and his crew raided seven fishing boats and two sloops — taking captives and collecting plunder.

Unsurprisingly, authorities took notice. On September 5, 1720, a proclamation in the Boston Gazette described Rackam and his crew as “Pirates and Enemies to the Crown of Great Britain.”

Anne Bonny and Mary Read had developed a reputation as well. After they raided a sloop, its captain remembered them as such: “profligate, cursing and swearing much, and very ready and willing to do anything on board.”

A one-time captive of Rackam’s crew described how Bonny and Read “had a machete and pistol in their hands, and cursed and swore at the men.” The September 5th proclamation had likewise identified “two Women, by name Ann Fulford alias Bonny, & Mary Read” as pirates.

That night, the crew was celebrating their string of good luck when Bonny and Read noticed a sloop fast on the approach. They shouted a warning. But the crew was too drunk to ready themselves for battle. Some of them had passed out, and others sought refuge below deck. As the sloop began its attack, Bonny and Read were among the few sailors left to fight back.

“If there’s a man among ye, ye’ll come up and fight like the man ye are to be!” Read cried as the ship became overwhelmed. When no one came to her aid, she fired a shot below deck — killing one of her crewmen. 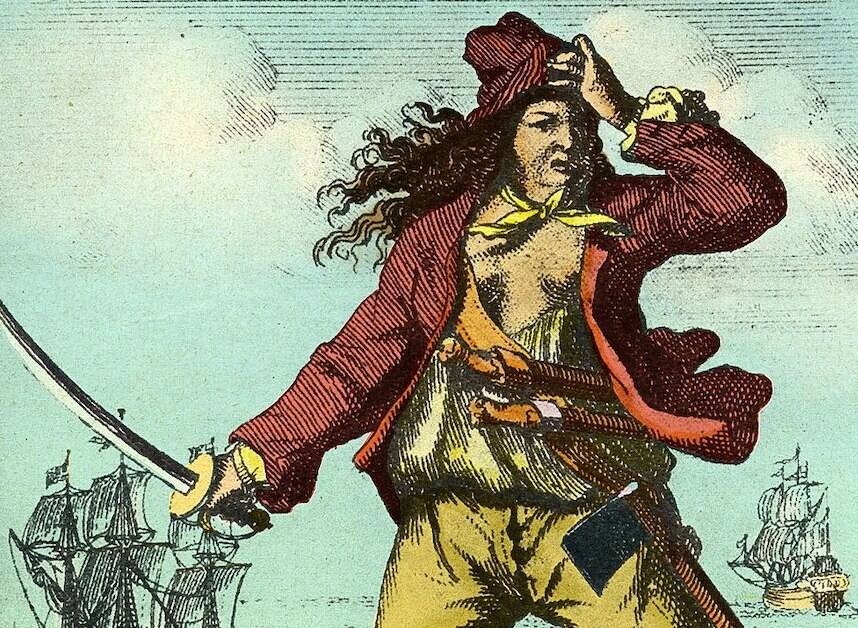 Wikimedia CommonsA contemporary engraving of Mary Read, who was known for her fearlessness in battle.

It was no use. Read, Bonny, Rackam, and the rest were arrested and taken to Jamaica, where they stood trial. The pirates were soon sentenced to death.

Facing the hangman, Rackam made one final request. He wanted to see Anne Bonny before he died. Bonny agreed to see her former lover and captain — but she brought him no words of warmth. Meeting Rackam in his cell, she told him that “she was sorry to see him there, but if he had fought like a Man, he need not have been hang’d like a Dog.”

Both Bonny and Read escaped the hangman’s noose by pleading pregnancy. Upon examination, their conditions were confirmed. They were sent to adjoining cells, to await the births of their children.

Mary Read died in jail on April 28, 1721. However, no one is entirely sure what happened to Anne Bonny.

It’s possible that she died in prison, like Read. But some other sources suggest that her father’s good reputation helped free her from prison. These accounts suggest that she returned to South Carolina, got married again, and had several children.

“What is become of her since,” Johnson wrote. “We cannot tell; only this we know, that she was not executed.” 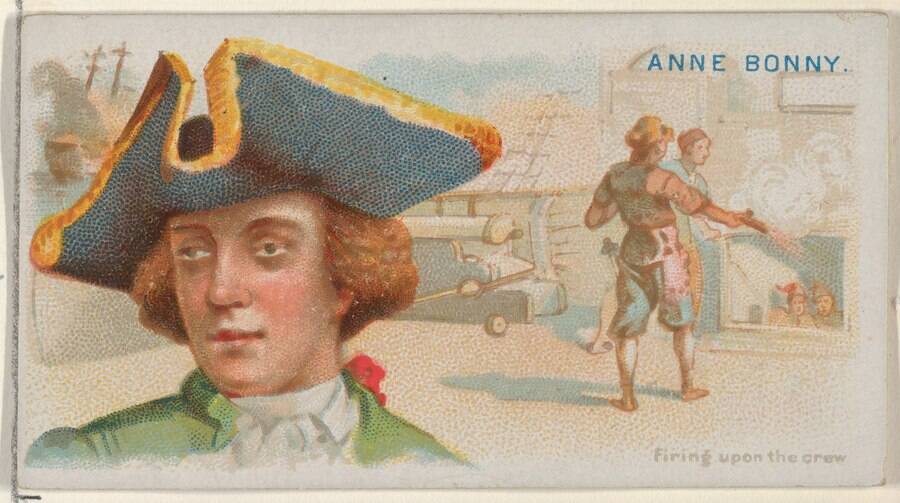 Wikimedia CommonsPortrait of Anne Bonny, from the Pirates of the Spanish Main series (N19) for Allen & Ginter Cigarettes. Circa 1888.

Although accounts of Anne Bonny’s story were written around the time that it was happening, some historians note that these accounts were later suppressed — probably so they wouldn’t give other women wild ideas.

“[Bonny and Read] broke gender boundaries and stunned people at the time,” noted Professor Kate Williams. “They were trailblazers in an incredibly male-dominated society who forged their own way… [but] they have been forgotten from history.”

Anne Bonny’s story may have been swept under the rug in the 18th and 19th centuries, but it seems to have gained new life in the 20th and 21st. That said, history books rarely include much information about Bonny.

Still, she’s been featured in films like Anne of Indies (1951) and Through the Eyes of Men (2013). Bonny has also been portrayed in video games (Assassin’s Creed IV: Black Flag) and on television (Black Sails). Additionally, she’s made appearances in songs, novels, and manga.

In November 2020, Anne Bonny’s friendship with Mary Read was immortalized in a statue of the two women standing together on Burgh Island in the United Kingdom. From there, they can keep an eye on the waters where they found love, glory, and adventure centuries ago.

After learning about Anne Bonny, read about Jeanne de Clisson, the fearsome woman pirate of 13th-century France. Then, discover the story of Ching Shih, an 18th-century concubine who later became a pirate.