The Ruthless Career Of Calico Jack Rackham, The 18th-Century Pirate Who Terrorized The Caribbean

The name “Captain Jack” might automatically bring forth an image of Johnny Depp’s famed character from Pirates of the Caribbean. However, there was an equally fierce Captain Jack who terrorized the Caribbean during the early 18th century: John “Calico Jack” Rackham. 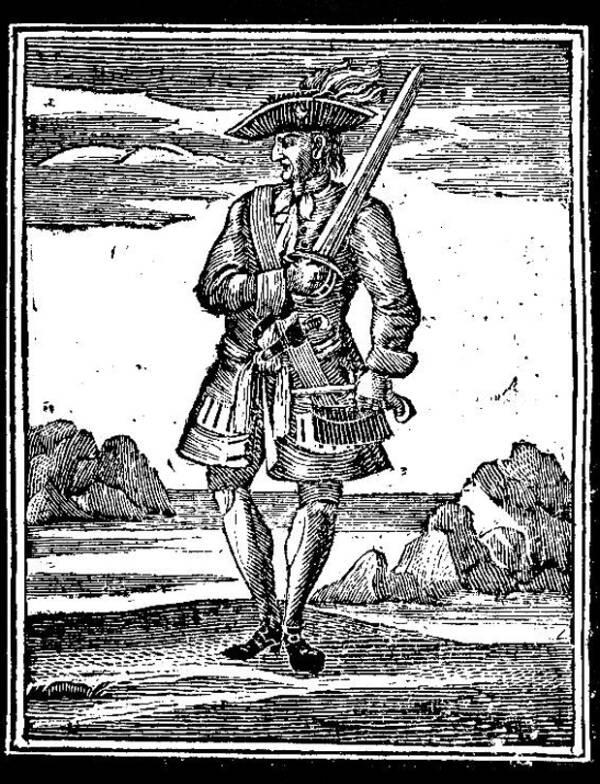 Rackham was known for his flamboyant, brightly-colored clothing. Rather than the silk and velvet attire that many successful pirate captains wore, Rackham preferred calico cotton from India — hence his nickname.

The flashy captain may not have had the sharpest sword skills on the seven seas, but he did have a bold disposition and a cunning nature. This allowed him to quickly rise through the ranks and become a force to be reckoned with in the Caribbean.

However, Rackham’s biggest claim to fame was perhaps the company he kept. There weren’t too many female pirates throughout history, but Calico Jack had two of them on his crew at the same time. And they fought alongside him until the day he was finally captured, bringing an end to his reign of terror.

Not much is known about the early life of Calico Jack Rackham. His name first appears in the annals of history as a crew member of a pirate ship called the Ranger in 1718. According to the World History Encyclopedia, his title was that of quartermaster, second in charge and the one responsible for disciplining other crew members.

However, the captain of the Ranger, Charles Vane, was quite unpopular. So when Vane wanted to tuck tail and run from an armed French warship, the majority of his crew was angry. They wanted to attempt to take over the valuable frigate.

Out of the 91 men on the ship, all but 15 of them voted to remove Vane from command. They branded him a coward and decided to make Calico Jack Rackham the new captain of the Ranger.

Everything was great — for about a month.

That’s when Calico Jack happened upon a Jamaican merchant ship he wanted to plunder. The Kingston had plenty of prized cargo and was too tempting of a target for Rackham to ignore.

The new captain and his crew skillfully took the Kingston. However, they failed to realize that they were so close to Port Royal, Jamaica that government officials and angry merchants saw it happen. The onlookers hired bounty hunters to capture the pirates and get the ship back.

The events that followed are disputed by pirate historians, but according to Crime Museum, the end result was that Captain Calico Jack and his crew managed to avoid being killed by the bounty hunters, though both their ships were taken. The men then made their way to Nassau — where they’d make a huge decision.

Once Rackham and his crew arrived in the Bahamas, they chose to take advantage of official pardons offered by the new governor, Woodes Rogers. The amnesty deal meant that pirates who turned themselves in could continue living as free men. That is, as long they gave up piracy. 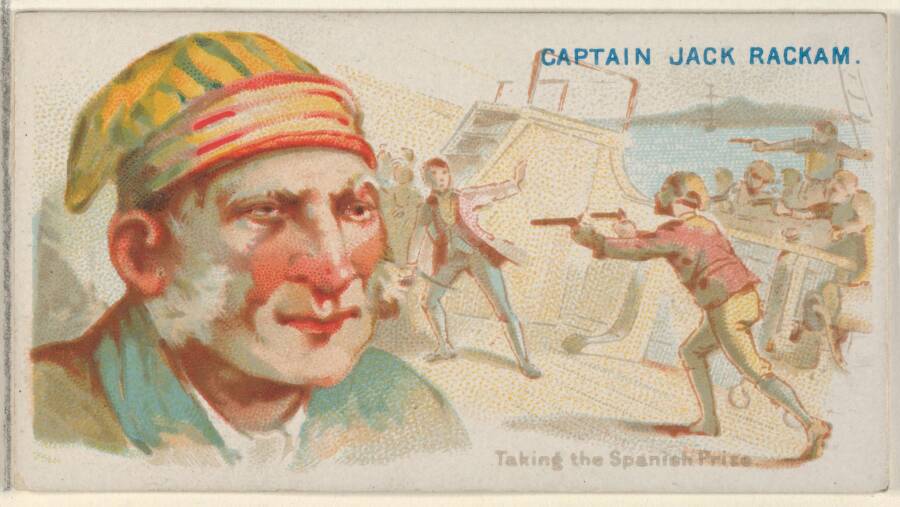 Wikimedia CommonsCaptain Jack Rackham “Taking the Spanish Prize,” from the “Pirates of the Spanish Main” series for Allen and Ginter Cigarettes, circa 1888.>

When pleading their case, the crew told Rogers how Charles Vane had forced them all into a life of crime. The governor believed them and accepted their plea for amnesty. He already hated Vane — and he was trying to rid the area of pirates, after all.

The newly-pardoned men intended to stay in Nassau and make an honest living. However, trouble was never too far away from Calico Jack.

He soon fell in love with Anne Bonny, the fiery, red-headed wife of ex-pirate James Bonny, who was employed by the governor as an informer against his previous cohorts. Rackham and Bonny became inseparable, and she petitioned the governor for an annulment to get out of her marriage. He refused. Rackham then offered James Bonny money in exchange for a divorce. He also refused.

There was only one reasonable course of action. The pair, along with a handful of accomplices, stole a ship and sailed off into the night. It was the pirate life again for Calico Jack.

Anne Bonny dressed and acted as a male crew member when it was time for a fight. However, she and Rackham were still lovers. They got married at sea, and Bonny soon became pregnant. Rackham dropped her off in Cuba to have the child when she couldn’t hide her condition any longer.

It’s unclear what became of the baby, but after Bonny birthed a son, she returned to sea with her nefarious husband.

The other female pirate aboard Rackham’s ship was Mary Read, and she was no stranger to dressing like a man. According to The History Junkie, Read’s mother had raised her mostly as a boy in order to disguise the young girl as her recently deceased son. She did this to get financial support from her late husband’s unknowing mother — even though Read was conceived during an affair.

Read grew up and joined the British military — still disguised as a man — and proved herself in battle. She fell in love with a Flemish soldier and got married, but after he died, she boarded a ship bound for the West Indies.

When pirates raided the ship she was on, Read willingly joined their crew, and by 1920 she was traveling with Calico Jack Rackham and Anne Bonny. Rackham did not know Read was a woman until Bonny told him, presumably because he was jealous of their close friendship.

In a matter of months, the entire crew earned themselves a reputation for ruthlessness.

Since Calico Jack had skipped out on his amnesty deal, Governor Rogers sent pirate hunter Jonathan Barnet after him in October 1720. Barnet located Rackham’s ship off the coast of Bry Harbour Bay in Jamaica and found the crew partying and drinking rum after a big payday.

Legend has it that in the ensuing melee, Anne Bonny and Mary Read led the crew in battle — as many of the men hid below deck because they were too drunk to fight. In the end, Barnet was successful in capturing them, and he transported the whole crew to Spanish Town, Jamaica to await trial. 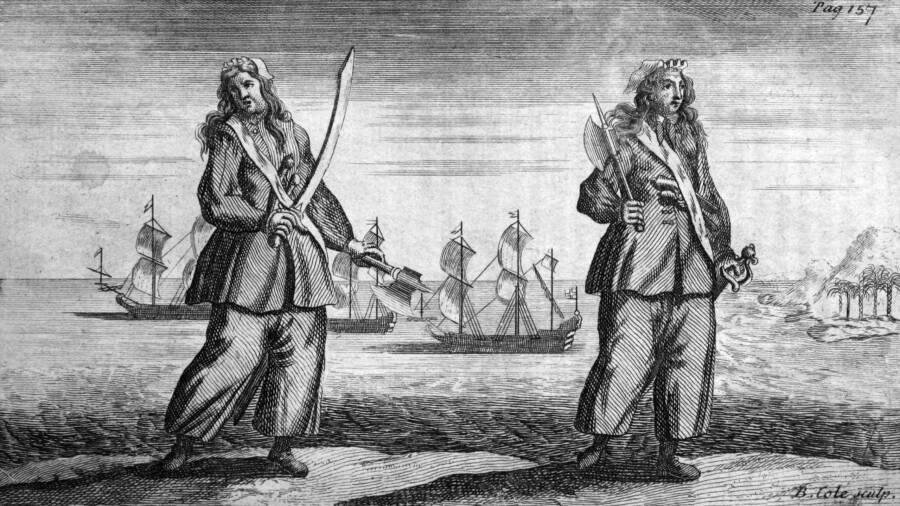 The Mariners’ Museum Research Library and Archives
A depiction of Anne Bonny and Mary Read.

Upon their arrival, both Read and Bonny claimed to be pregnant to avoid the death penalty. The court found Calico Jack Rackham and the rest of the men guilty and sentenced them to hang. According to The Way of the Pirates, upon hearing this, Bonny famously told her husband, “If you had fought like a man, you need not have hanged like a dog.”

Mary Read ended up dying in prison, but Anne Bonny disappeared from the record book. There’s no mention of her being executed or released. Some like to believe she escaped and lived out the rest of her life peacefully.

Rackham’s legacy is one of bravery and cunning, but it goes even farther than that. He’s often credited with designing the Jolly Roger flag that is synonymous with pirates today. The claim is likely erroneous, according to author Benerson Little, but it’s widespread enough that Calico Jack’s name is commonly recognized today, even though he spent only two years as a swashbuckling buccaneer.

After learning about the life of Calico Jack Rackham, check out these 21 pirates who put Jack Sparrow to shame. Then, read more about how Anne Bonny and Mary Read pioneered female piracy.