Why This Woman Conquered Niagara Falls In A Pickle Barrel

Meet Annie Edson Taylor and learn why the tale behind her infamous stunt is as fascinating as the stunt itself. 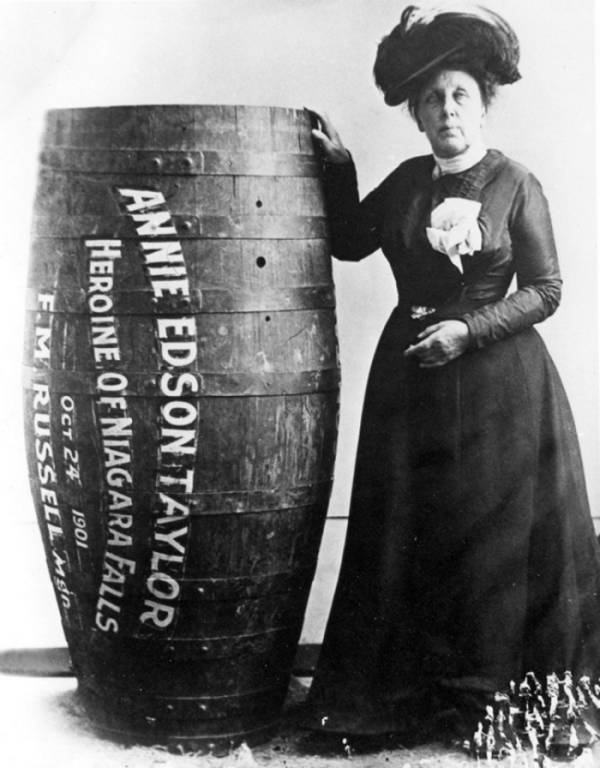 Annie Edson Taylor, the first woman to go over Niagara Falls in a wooden barrel, pictured here with her preferred mode of transportation.

In 1901, it wasn’t Evel Knievel, Johnny Knoxville, or any other man who was challenging modern conventions with unthinkable stunts. It was a 63-year-old schoolteacher named Annie Edson Taylor.

On October 24, 1901, Taylor became the first woman to travel (and survive) a trip down Niagara Falls in a wooden barrel. Although she claimed to be in her 40s, it was in fact her 63rd birthday.

But it wasn’t a thrill-seeking adventure for Taylor. She was single, broke, and had bills to pay. Her husband was killed in the Civil War and it wasn’t easy to make ends meet as a traveling schoolteacher.

When she saw a magazine article about people who became famous for riding in barrels in the whirlpools at the bottom of Niagara Falls, she believed she had found the answer to all her problems. In true American fashion, she set out for instant fame and fortune.

With the help of two assistants and in front of a crew of media and spectators, Annie Edson Taylor strapped herself into a leather harness fixed inside of a five-foot-high, three-foot in diameter wooden pickle barrel. A boat tugged her out to the Niagara River and cut the line. Roaring rapids guided her and her cushion-lined barrel until she reached the famous Horseshoe Falls and flew over the edge.

More than 3,000 tons of water flow over Niagara Falls every second, reaching a speed of 32 feet per second before smashing to the surface pool with more than 2,500 tons of force. On that day, all that water had a living, barrel covered companion. She reached the shore around 20 minutes later — tousled, but alive.

Light bulbs from the waiting cameras flashed, and the media descended upon Annie Edson Taylor. She had her 15 minutes of fame 67 years before Andy Warhol would popularize that very notion, and then once again fell into anonymity, never achieving the fame and fortune she was searching for.

After learning about Annie Edson Taylor, check out history’s most eccentric people, and then read about six of the world’s most famous corpses.